Dr. Isaac Coe turned up unexpectedly in Oregon last month.  Not the actual Dr. Coe — he’s buried at Crown Hill cemetery — but an antique photograph of an even older portrait of the pioneer physician who helped save the citizens of Indianapolis during the great epidemic of 1821.

I found Dr. Coe in the same place where I once ran into his good friend James Blake – on ebay.  Not the actual James Blake, of course, but a pencil sketch of the rustic house built by the man who deserves a fair share of credit for building our city.    If not for handwritten notes on the backs of both items, the framed Coe photo would have been sold as an “instant ancestor,” and the somewhat crude pencil sketch would likely have gone to someone who only wanted the antique frame. 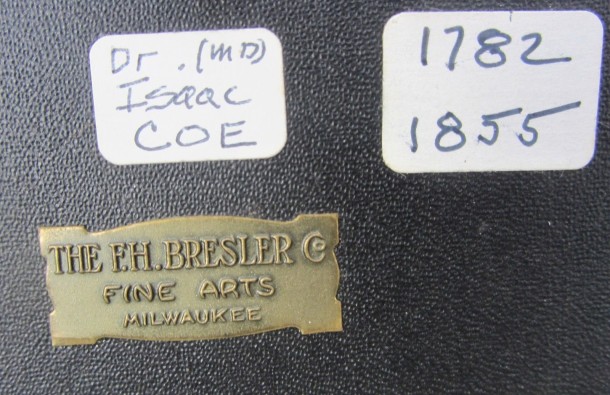 The seller listed the Coe photo in early December with a starting bid of $35.  After a few minutes on Google, I quickly discovered that the item was not an actual photograph of the pioneer physician taken before his death in 1855, but a photograph of an oil portrait painted by an unknown artist in the early 1850s.  The painting is owned by the Indianapolis Museum of Art but a photo may be found online.

I had planned to bid on the photo, but seller ended the auction early due to a “mistake,” and then relisted the item for $250, noting that he had been told it was an ambrotype of Coe.  Ambrotypes are delicate photographic images printed directly on glass that enjoyed a brief spurt of popularity from about 1855 to 1865.  Although it is possible that Dr. Coe could have had an ambrotype portrait taken during his lifetime, the fact that the image had a clearly visible white border and matched the photo I found online led me to believe that it was a 20th century  photo.

I emailed this information to the seller in hopes that he would budge from his $250 price.  He responded by relisting the item for $250 “or best offer.”  By the time I got around to checking ebay again, Dr. Coe was gone from my life, sold to an unknown bidder. 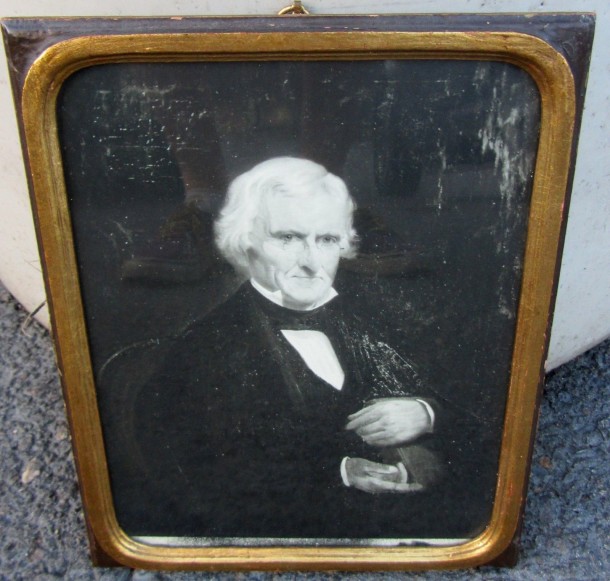 Although my spirits were dampened by the loss of the photo, my curiosity was piqued.  How did a photograph of an oil painting of the second physician to practice in Indianapolis end up in Milwaukee, where it was beautifully framed, and then travel to Oregon to be listed on ebay?  And more importantly, if the most recent owner of the photo was a descendent of Coe’s, did the ebay seller have any other items linked to Indy’s pioneer history?

I contacted the seller in an effort to find out where he obtained the photo and also scoured his other listings in hopes that I would find additional items with a connection to Coe.  This strategy worked for me last summer, when I was able to pick up three coin silver spoons owned by city founding father John Wilkins after a quilt made by his wife in 1830 sold on ebay for $1,875 to a buyer in New York.

No such luck this time.  The seller was unresponsive and the trail for Coe was cold. 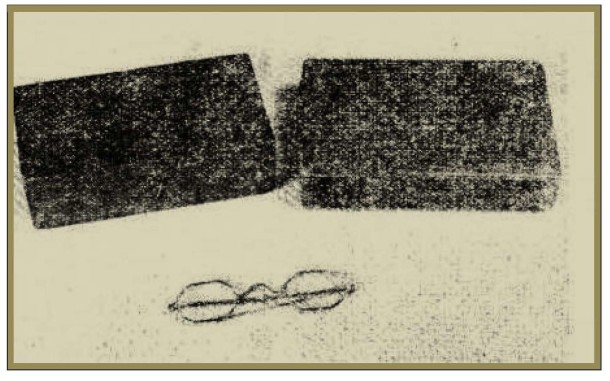 Dr. Isaac Coe’s glasses and medicine cases. From a photo published in 1949 in the Indiana State Department of Health Bulletin.

In the nearly 200 years since Indianapolis was established,  thousands of items owned and touched by the city’s pioneer residents have been discarded, destroyed or scattered far and wide, as their descendants die off or leave the city for parts unknown.  Unless a surviving item bears the original owner’s name or is accompanied by a letter explaining its provenance, it will eventually end up in an antique mall where it will just be some other “dead person’s stuff,” as the Ikea crowd would say.

Isaac Coe is an important figure in the history of Indianapolis.  He built the first house with glass windows, founded the first Sunday school, and was the only physician healthy enough to tend to the sick during the malaria epidemic of 1821.  In so doing, he may have spared Indianapolis from the fate of Hindostan, a once-thriving town that lost its claim to the county seat of Martin County after an unknown illness felled most of its citizenry in 1827.

In August 1949, the Indiana State Department of Health published a fascinating profile of Coe as part of a series on the history of medicine in Indianapolis. At the time, his great-great-granddaughter, Evelyn Ray Sickels, appeared to be the keeper of the Coe family history. As the article notes, Isaac Coe’s glasses, his medicine cases and an oil painting of his wife were among her cherished possession. 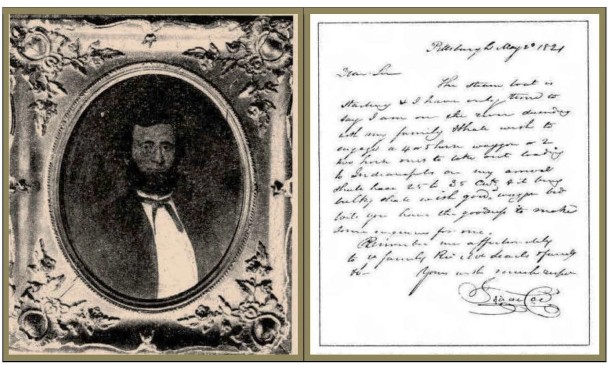 Other Coe items also survived well into the 20th century.  The 1949 article features an early photograph of the good doctor, along with a letter he penned from Pittsburgh in May 1820 asking the postmaster of Madison to make arrangements to transport his family and their possessions through the wilderness to Indianapolis.  The owner of the photograph was not mentioned but according to the article, the original letter is at the Indiana State Library.

A 1931 article in The Indianapolis Star sheds some light on how Evelyn Sickels came into possession of Coe’s personal items. Written by Agnes McCulloch Hanna as part of a series on historic Indianapolis homes, the article features the handsome brick home at 536 N. Illinois built in 1855 by Coe’s daughter Alma and her husband William Sickles.

Alma had inherited the lot from her father, who had used it as pasture for his cows.  The Sickels family lived there until shortly after the Civil War.  After a series of subsequent owners, the home was donated to the state by Dr. and Mrs. Robert Long as part of a larger gift aimed at ensuring a hospital was built for the Indiana University medical school.  Although the house was still standing when McCulloch wrote her article in 1931, the once-pastoral setting is now graced with a parking garage.

According to the 1931 article, a number of Isaac Coe’s descendants were living in Indianapolis in 1931.  And although the house on Illinois Street had been sold some 60 years earlier, many of the home’s original contents had remained in the Sickels family, including family portraits, daguerreotypes, and silver spoons.

A particular item of interest was a set of dishes that had been handed down through the family for nearly a century.  The dishes had been used by the children of Coe’s daughter Maria and her husband, James Ray, the first banker in Indianapolis. However, differing stories were told as to why the dishes were used.

As recounted in the 1949 profile of Dr. Coe, the children came to live with him and his wife after their mother died.  Mrs. Coe, who was described as a “good woman” who was “much impressed by the austerities of life,” apparently believed it was important to remind the children on a daily basis that they were orphans. So she purchased a special set of dishes for their personal use that featured a picture of three small children standing over the grave of their mother.

The 1931 Star article puts an entirely different spin on the dreary dishes. According to that article, the three children went to live with their aunt in the house on Illinois Street after their mother died.  On a visit to town, the children saw and admired the dishes, and “such was their aunt’s devotion to them that she bought the entire set with its pink landscape decorations, that they might have the pleasure of eating from it!”

Regardless of which version of the dead-mother china is accurate, in 1931 pieces of the set were “still extant.” But where are they now? 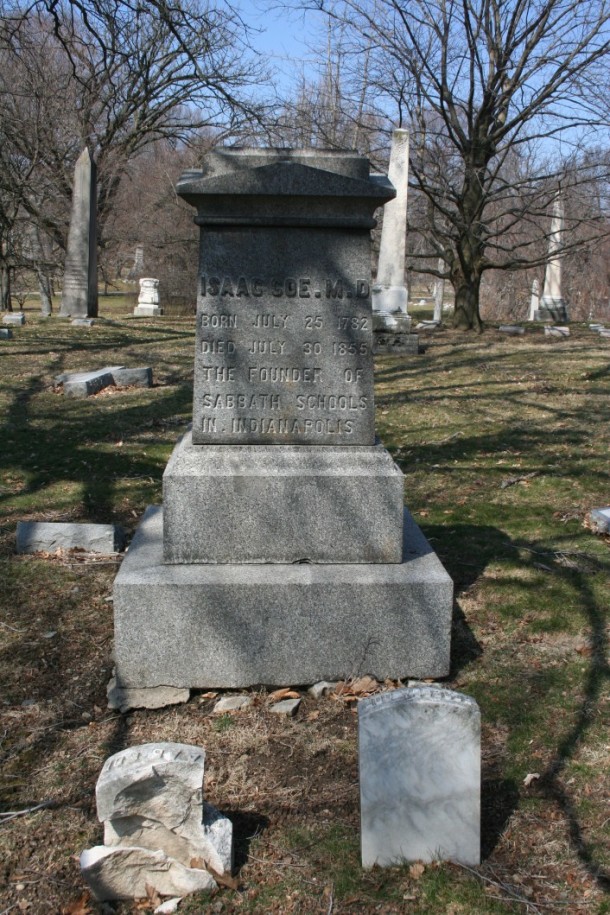 Coe’s great-great granddaughter Evelyn Ray Sickels died 34 years ago in Carmel, California.  As a long-time librarian, she was the ideal family member to be charged with the responsibility of preserving Coe’s glasses, medical cases and personal papers.  However, she was also a single, childless woman who died in a faraway state at the age of 86. Did she pass along these precious pieces of Indy history to family members, or were they sold in an antique mall next to a jumble of other dead people’s stuff?

Sickels’ obituary lists two nieces, Mrs. Frank G. Ryder of Batesville, Virginia, and Mrs. Herbert A. Beyer of Bloomfield Hills, Michigan.  To date, my somewhat half-hearted attempts to track down their descendants have not been fruitful.

Fellow HI contributor Joan Hostettler is on a similar search for descendants of Isaac Coe.  In a 2013 Then & Now post, Joan featured a photograph of Dr. Coe’s house on the Circle, which stood on the present-day site of the Columbia Club.  The photograph was a copy from a 1930 book that stated the original had been loaned by a “Miss Sickels,”  a descendant of Coe’s.  For some years, Joan has been searching without success for the original, which was most likely a daguerreotype.  If she could track it down, a high-resolution scan could be added to The Indiana Album Project, a community-submitted digital collection of photographs lingering in albums, attics, and basements throughout the state.

Genealogists always stress the importance of writing names and dates on the back of old photos.  But what about the history of everyday objects? Isaac Coe’s glasses, his medical cases and the daguerreotype of his house on the Circle may still be out there somewhere, cherished by a family member who is a genealogy buff or enjoyed by an antique collector who has no knowledge of their historical significance to the city of Indianapolis.

As the city’s bicentennial approaches, I’d love to see a project like the Indiana Album launched to track down and record actual objects that were owned or used by the men and women who shaped the history of Indianapolis.  And for those you who are making history right now, buy a label maker and slap your name on everything you own.  Your descendants will thank you someday. 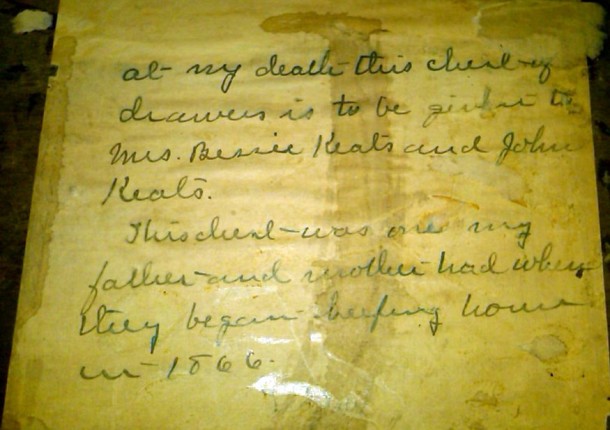 This note is taped to the old cherry chest of drawers that stood in my parents’ bedroom when I was growing up in Kokomo. We always wondered who Bessie Keats was and whether she ever inherited the chest as stipulated in the note. My brother has the chest now, and I’ve encouraged him to tape a similar note in another drawer to puzzle and confuse future generations.