Entire city blocks submerged in water. Families trapped in their attics, calling out frantically for help. Children forced to abandon their dogs when rescuers finally arrived, and as the waters began to recede, a star-studded benefit to help rebuild the city. It may sound like a scene from post-Katrina New Orleans, but the year was 1913 and the place was Indianapolis.

The torrential downpour started on Easter Sunday, and did not let up for five days.  By the time the skies began clearing over Indianapolis, more than 7,000 families had lost their homes and at least 25 people had lost their lives. Nearly 100 years later, the Great Flood of 1913 remains the city’s most devastating natural disaster in modern times. 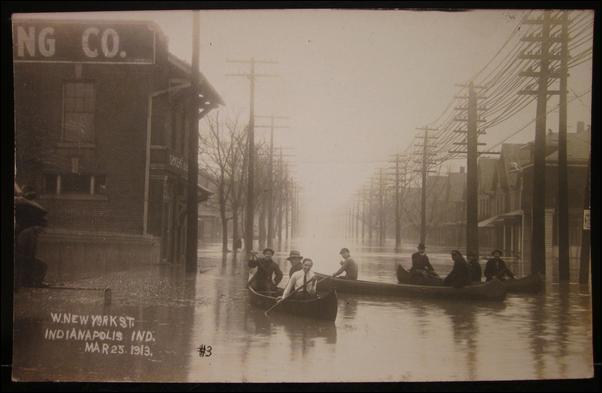 Rescue canoes paddle through the future site of the IUPUI campus. The building to the left was the Grocers Baking Company, located on the corner of New York St. and present-day University Avenue. The photo above was taken on the 3rd day of the flood.

The first hint of disaster came on Good Friday, March 21, when a violent windstorm swept through Indianapolis.  Dark rain clouds hovered low in the sky throughout Saturday, but because it would be seven more years before the city had a radio station and decades until the advent of doppler radar, most families just went on about their business, unaware of the gathering storm.

Indianapolis residents woke up to a downpour on Easter Sunday. By midday the sodden ground — already saturated from heavy rains — began to flood. Still, residents were not overly concerned, and the 11th Annual Auto Show opened at the fairgrounds on Monday as planned, albeit to a smaller-than-expected crowd.

The rains continued all day Monday, and earthen levees along White River, Fall Creek and Eagle Creek began giving way, unleashing torrents of water onto surrounding streets.  On Tuesday, floodwaters breached the Indianapolis Water Company’s pumping station, shutting down water service to the entire city. At a time when most Indianapolis residents would have welcomed a beer, brewer Albert Lieber generously invited the public to draw “pure water” from the 15 wells on the grounds of the Indianapolis Brewing Company.

On Tuesday evening, hundreds of spectators who had gathered on the near west side to watch the river rise were forced to flee when the Morris Street levee broke. Rescuers who spent the night searching the flooded district reported cries for help “that suddenly became hushed as though overwhelmed by the oncoming water.”

By the time the river reached its crest on Wednesday, an estimated 10,000 homes had been flooded.  The hardest hit part of the city was West Indianapolis, an industrial suburb roughly bounded by Washington Street, White River Parkway, Raymond Street and Belmont Avenue. 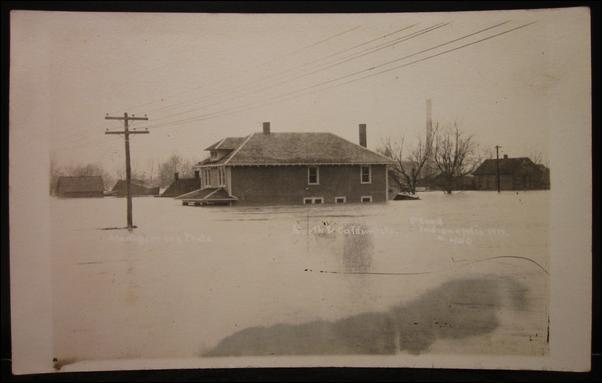 Submerged home at the corner of North and Caldwell streets (located on northwest side of present day IUPUI campus).

Tomlinson Hall was turned into a relief station, providing food and medication to victims of the flood.  Nearly 500 refugees were housed in Emmerich Manual High School, the Boys Club, and St. Vincent’s Infirmary.  Another 500 flood victims took shelter in their attics, refusing to leave, and 300 persons sought refuge at School 16, located on Market Street in the near-westside Stringtown neighborhood.

While the damage was heaviest along the White River, Fall Creek was flooded up to 13th Street, washing out Fall Creek Boulevard and forcing near-northside residents from their homes. Capitol Avenue was the only route open to the northern suburbs, because the flood had either destroyed or seriously damaged bridges on Meridian, College and Northwestern Avenue, and Illinois Street was underwater for several blocks south of the bridge.

On Wednesday, water began to lap against the front porch steps of houses in 3200-3300 blocks of Park, Broadway and College.  In an effort to stop the rushing water from reaching their homes, a few of the remaining residents who had not fled to higher ground built a make-shift dike that temporarily redirected the flood waters away from their homes and down Broadway Street.  Not surprisingly, this un-neighborly action enraged the people who lived on Broadway. Before the altercation could escalate into violence, however, the waters breached the earthen levee and the entire neighborhood was submerged.

More than half of Broad Ripple was also underwater by Wednesday as water rose more than 12 feet above the Broad Ripple dam. Throughout the day, dozens of men frantically carried sandbags and other materials to build up the locks on the canal to prevent the rest of the town from being flooded. 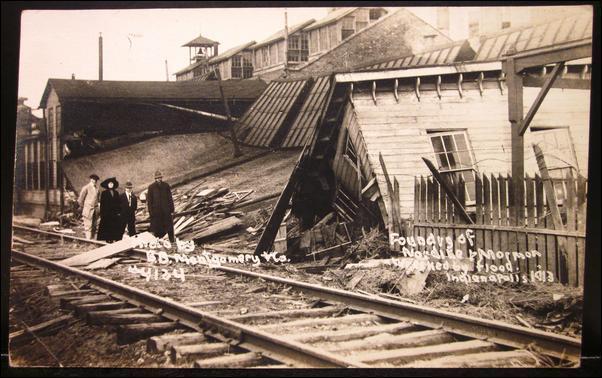 Nordyke & Marmon was a leading manufacturer of milling machinery. The factory was located at the corner of Morris Street and Kentucky Avenue.

In the early hours of Thursday, March 27, patrol boats heard a terrifying crash. When daylight came, they saw that the Vandalia Railroad Bridge had collapsed into the White River, along with 10 coal-laden freight cars that had been placed on the bridge in an unsuccessful effort to steady it against the raging waters.

The waters began to recede on Thursday but the post-flood problems were just beginning.  Numerous reports of looting prompted Governor Samuel Ralston to call out the National Guard.  Their orders were to shoot any thieves on sight. The temperature had also dropped down into the low 20s. Combined with a bitter wind, the harsh weather endangered the lives of both the flood victims who were stranded in their unheated homes and the rescuers who were trying to save them.

By Friday, life slowly began to return to normal in those parts of the city that had not been damaged by the flood.  The Indianapolis Water Company resumed water service and hundreds of freshly bathed people jammed the English Opera House to watch a “monster benefit performance for flood sufferers” arranged by The Indianapolis Star.  Meanwhile on the near westside, families returned to their ruined homes and began the painful process of piecing their lives back together.

As the 100th anniversary of the 1913 flood approaches, I’m grateful that meteorologists have dubbed it a “500 Year Flood Event.”  I sure hope they’re right. When the White River crested at 7 a.m. on the morning of March 26, 1913, its height was estimated at 31½ feet – more than 19 feet above flood stage. Ironically, the exact height of the river during Indianapolis’ most infamous flood is unknown because the gauge washed away when the water reached 29½ feet. 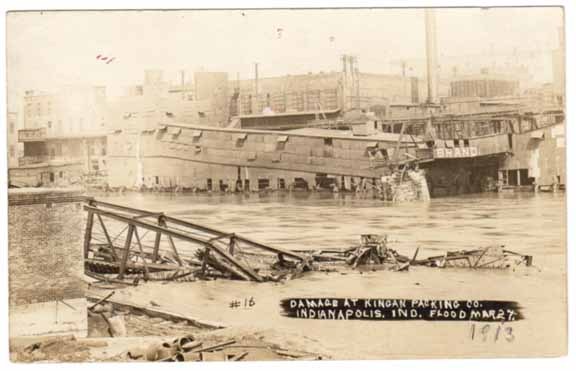 Flooding damaged the Kingan Packing Company at Maryland and Blackford streets (present day site of Victory Field and the Lawn at White River State Park). The ruined Vandalia Railroad bridge is pictured in the foreground.

Last month, a grouping of real photo postcards of the Great Flood of 1913 was offered on eBay at prices ranging from $10 to $14 each.  Commonly known by the acronym “RPPC,” real photo postcards are actual photographs developed on postcard-size paper.  RPPCs became popular during the first decade of the last century after Kodak created a service that enabled people to create postcards from any picture they took.  Because most RPPCs were printed in limited quantities, they can command high prices.  Given the great interest in the subject matter, however, RPPCs of the 1913 flood are fairly common and relatively inexpensive.

If you’re interested in RRPC and other items of ephemera, you might want to check out the Beech Grove Book, Postcard, Political & Paper Show. It’s open tomorrow (Feb. 26) from 9-4 at the Beech Grove High School Gym.  It’s always a fun show, and as my dad would say, I’ll be there “if the good Lord is willing and the creek don’t rise.”