I’ve noticed that most books about Indianapolis history – or at least the accurate ones – tend to focus on events that actually happened. But sometimes it’s more interesting to read about those things that might have happened – the near-misses and what ifs that cause a collective sigh of relief when we realize how close our city came to becoming something other than what it is today.

For example, if city planners of the 1950s had their way, visitors to tomorrow’s Super Bowl would encounter a much different downtown Indianapolis. Children would frolic in a 13-acre amusement park, helicopters would land every 15 minutes at the site of the former Union Station, and revelers on Georgia Street would have no difficulty finding a parking space because the entire block would be converted into a giant parking garage. 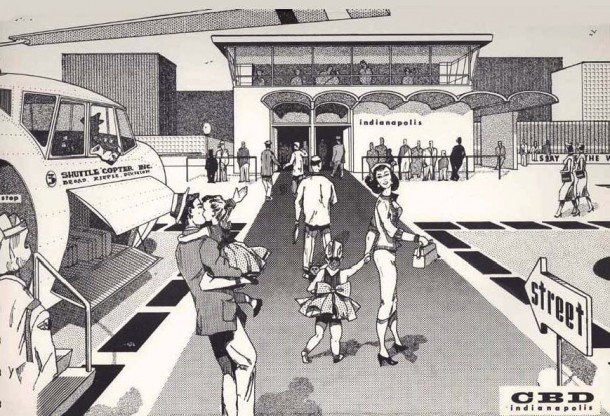 In a 1958 plan released by the Metropolitan Planning Department, Union Station would be demolished and replaced with a "modern" transportation hub, including helicopters ferrying residents from Broad Ripple.

In a 1958 plan released by the Metropolitan Planning Department, Union Station would be demolished and replaced with a “modern” transportation hub, including helicopters ferrying residents from Broad Ripple.

Some of the most intriguing plans that never made it off the drawing board were hatched in the 1950s, a time of explosive post-war growth. Although it would be years before Mayor Bill Hudnut said “You can’t be a suburb of nothing,” city leaders were becoming increasingly anxious as they watched the once-thriving downtown disappear down the donut hole.

The Crossroads of America plan was the first and arguably the most ambitious of the post-war downtown redevelopment schemes. In the making since 1945, the Crossroads plan was unveiled in September 1953 in a special edition of The Indianapolis Star. I was lucky enough to find a copy at a flea market. “Want a Preview of Indianapolis of 1978?” the headline screamed. Yikes. I lived through the Blizzard of 78, and also personally witnessed a lot of really bad disco dancing in 1978. So it was with some trepidation that I opened the newspaper to go back to the future (or at least what was the future in 1953). 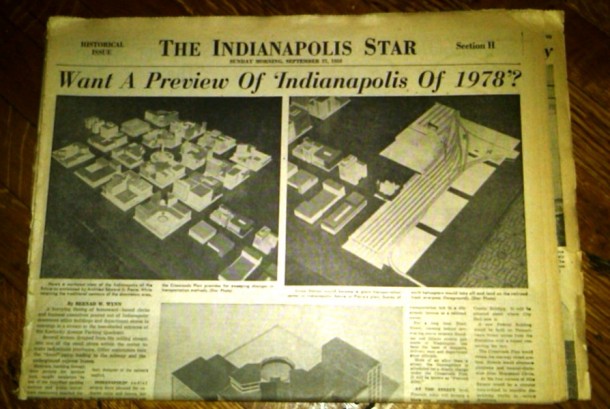 In celebration of its 100th anniversary, the now defunct L. Strauss & Co. store had commissioned architect Edward Pierre to design a vision of the city 25 years in the future. Above on the right is a rendering of Union Station, which would become a giant transportation center, complete with a helipad on the railroad overpass.

To solve the growing parking problem in the Mile Square, the Crossroads plan called for the construction of four gigantic parking centers capable of holding 1,500 cars at the entrance to each diagonal street. Each quadrant would then be retooled with a special focus — Indiana Avenue would become the entertainment hub, Kentucky Avenue would focus on business and hotels, Virginia Avenue would become a mini-Wall Street, and Massachusetts Avenue would house medical offices. A subway would connect each quadrant to the rest of downtown. 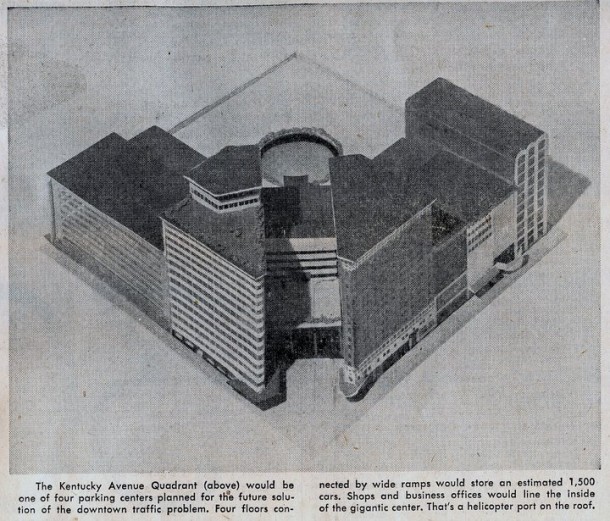 To alleviate Statehouse overcrowding, the Crossroads plan provided for a mall surrounded by government buildings on the west side of the Statehouse. This vision was partially realized in the 1990s with the completion of the State Office Building complex.

However, Pierre’s proposal to turn an alley into a fashion runway never took flight. Under the Crossroads plan, Pearl Street, which ran between Meridian and Illinois Street, would be renamed “Peacock Alley” — the fashion center of Indy with “open air fashion shows and small cafes where weary travelers can take time out for a rest.” 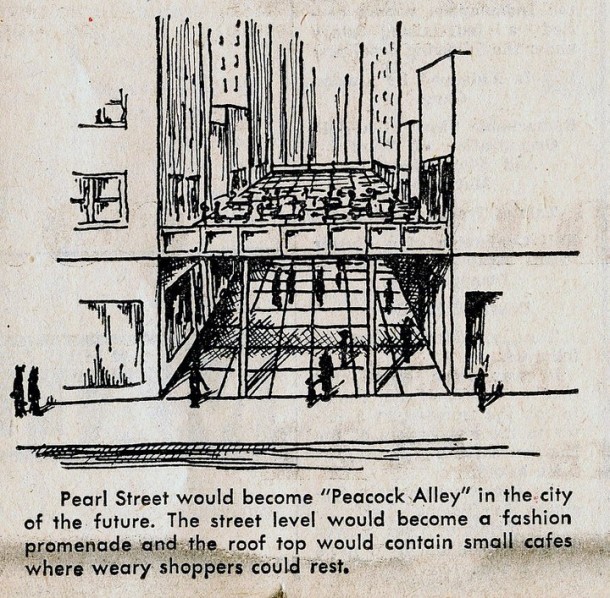 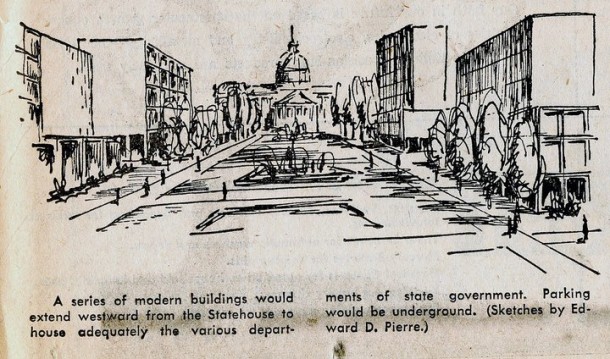 A super dual-lane highway called the “Life of Riley Road” would wind by the poet’s home in Lockerbie Street and end up at Riley’s tomb at Crown Hill Cemetery. The Lockerbie area would be turned into a 1890s theme park called “Lockerbie Fair.” 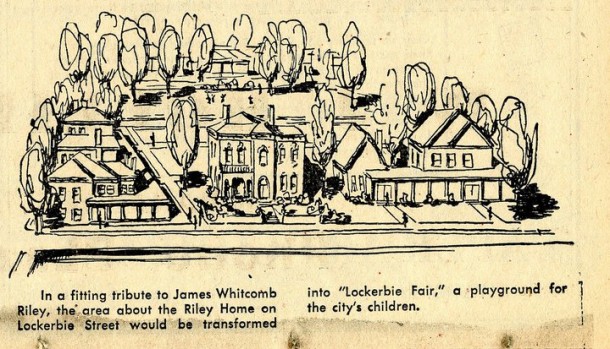 Of all the ideas in the Crossroads plan, Lockerbie Fair was the one that generated the most serious discussion by city planners. Pierre first conceived the idea for a Victorian-era theme park in 1936, and support for the project continued to build over the next two decades. In 1960, Mayor Charles Boswell declared that redevelopment of the decrepit Lockerbie neighborhood into a “national tourist mecca and playground” was the top priority of his administration.

Last summer, I went to an estate auction on the northwest side of Indianapolis. The auctioneers were selling the property of the late Robert Braun, who served from 1969 to 1972 as the first executive director of the Historic Landmarks Foundation. From my perspective as an Indianapolis history buff, it was the perfect way to spend a Saturday. Windows, doors and terra cotta salvaged from long-gone buildings were stacked along the driveway, and tables in the yard were piled high with old books and other documents about Indianapolis. At the bottom of a pile of old prints and documents, I found detailed renderings for Lockerbie Fair. 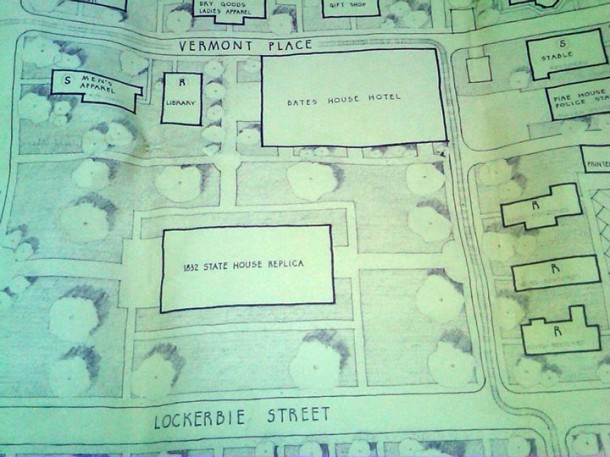 Under this version of the Lockerbie Fair proposal, the historic houses fronting New York Street would be torn down or moved, with the entire area replaced by a massive parking lot. In addition to the Riley home, Lockerbie Fair would also feature replicas of Indianapolis’ original Statehouse and the Bates House hotel, where Abraham Lincoln spoke on the way to his first inaugural.

The faux-19th century village would include an apothecary, gunsmith, candle maker and 1850s style restaurant, as well as modern amenities such as a photo shop and beauty parlor. No cars would be allowed; instead, tourists would travel by carriage. 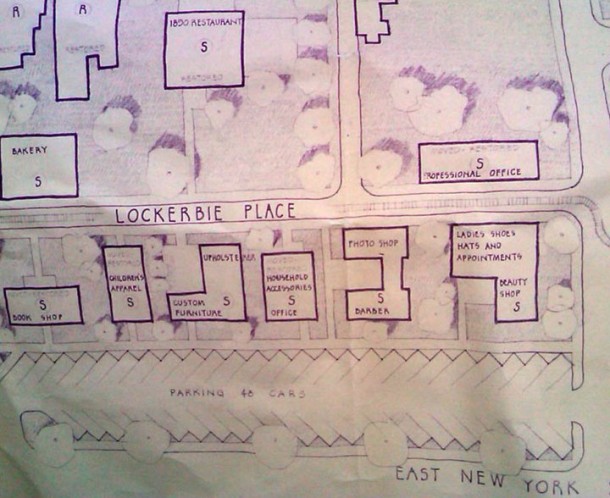 Lockerbie Fair was an integral component of a master plan for the central business district developed in 1958 by the then-new Marion County Metropolitan Planning Department. The futuristic plan called for razing large portions of the downtown where property values had plummeted and re-developing those areas through public and private projects.

Noting that the new City-County building “will become a reality” in 1961, the Department proposed that the blocks to the north and south should be redeveloped “in keeping” with the modern structure. For example, the old City Market building would be demolished and replaced with a cube-like structure filled with “natural light and bright gay colors which would give a festive atmosphere for the market shopper.” 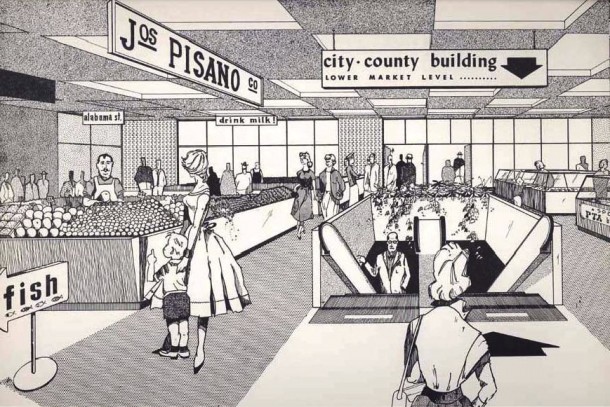 Other ideas included razing entire square blocks on the near-northside to build a village of high-rise apartments, and replacing the old Union Station with a modern heliport and transportation hub.

Although it would be eight more years until the NFL held its first Super Bowl, city planners in 1958 did come up with one idea that was surprisingly prescient. Under the master plan, entire blocks between Maryland and Georgia Streets would be converted into parking garages surrounded by one-way streets. The planners called this concept a “vehicle island”. While lacking the charm of the historic structures that currently line the Super Bowl Village, a vehicle island or two would likely prove popular this weekend. 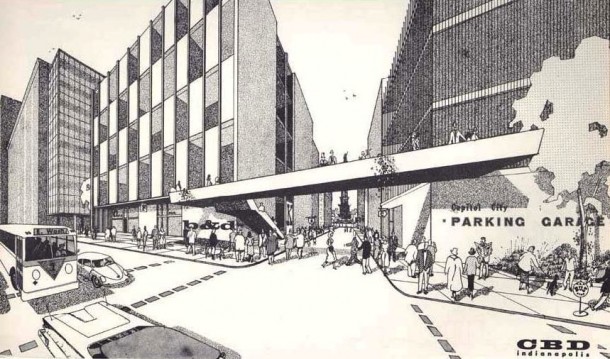 Thanks to the Internet – something that could not have been imagined by city planners in the 1950s – these futuristic plans have not been relegated to the dustbin of history. A scale model of Pierre’s Crossroads plan is now housed at Ball State University and may be viewed online by clicking here . The 1958 Central Business Department Report is posted on the city’s website (hopefully not for future reference by city planners), and can be downloaded by clicking here.

In 1856, the poet John Greenleaf Whittier wrote “For all sad words of tongue or pen, the saddest are these, ‘It might have been.'”

Obviously, Whittier had not seen these documents.