Lewis Baum was an unhappy man.  The old building where he rented office space was set for demolition in June 1907, which just didn’t seem fair since he had a lease that ran through 1908.    So he did something that in retrospect seems a little crazy.  On the day that demolition started, he went to his office, or at least what was left of his office.  And for the next five days, he worked calmly from his desk, refusing to leave even as the walls crashed around him  and plaster rained down on his head.

The story of Baum’s Last Stand actually started six months earlier, when the Indiana Grand Lodge of the Independent Order of Odd Fellows voted to tear down their building on the northeast corner of Pennsylvania and Washington Streets and replace it with a modern skyscraper designed by architects Rubush & Hunter. Tenants who had unexpired leases were offered space in the new building.  Baum, who ran the Aetna Mortgage & Loan Company from a second floor office, balked at these terms.  Instead, he demanded $10,000 in moving expenses and a 10-year lease in the new building at a rate of $35 per month. The Odd Fellows countered with a letter ordering Baum to vacate by June 22 or face a date with wrecking ball. 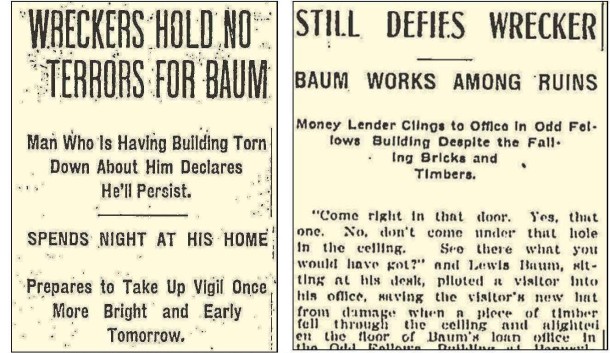 As the day of “wreckoning” approached, it became apparent to the Odd Fellows that Baum was going nowhere. So in a pre-emptive move, local demolition expert “Bryant the Wrecker” and his crew showed up in the wee hours of Saturday, June 22 and started tearing down the building.  Although Baum was surprised when he arrived at work to find a significant portion of the building gone and the door to the second floor bolted shut, he was undeterred.  Baum kicked down the door, wiped the plaster dust from his desk, and was open for business to anyone who needed a loan and had the courage to venture inside the half-demolished building.

The following Monday, Baum went to the office as usual, only to find that rain had poured through a gaping hole in the roof, drenching his papers, ruining his typewriter and leaving a puddle of water on the floor.   Still, he soldiered on. On Tuesday, Baum was quoting interest rates to a potential customer over the phone when a two-by-four landed on his desk. Unfazed, he rolled his desk to a far corner of the office and continued his computations.

“Bryant the Wrecker” was finally ready to call Baum’s bluff.  On Wednesday, he ordered his men to tear down two huge chimneys and throw the bricks through a hole in Baum’s ceiling. Bryant himself kicked off the day’s festivities by dumping a fusillade of broken glass directly into Baum’s office.

By midafternoon, a large crowd had gathered on the street below, waiting to see whether Baum would bolt from his office unharmed or be crushed to death in a hail of debris. Bryant professed to not care either way.  As the workers started hammering away at the chimneys and hurling large hunks of brick into Baum’s office, the crowd murmurred with anticipation. But when the last brick fell, Baum was nowhere to be found.  Accompanied by his lawyer, he had watched the entire sad spectacle from an office across the street. 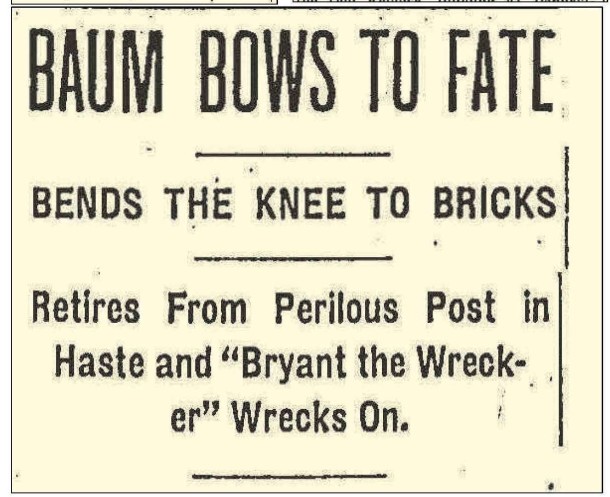 A few days later, Baum threatened to file at least seven different lawsuits against Bryant and the Odd Fellows unless the officers of the Grand Lodge came forward with an offer of compensation. What happened next is unclear, but by early 1908, Baum had moved the Aetna office across the street to 10 North Pennsylvania.  Meanwhile, construction proceeded without incident on the new skyscraper that for a brief period would be the tallest building in the state of Indiana.

The old building that served as ground zero in the Bryant vs. Baum battle was designed by Francis Costigan in the mid-1850s to serve as the state headquarters, or Grand Lodge, of the Independent Order of Odd Fellows.  The Grand Lodge had relocated from Madison to Indianapolis a decade earlier, and needed a substantial structure to serve as its seat of governance. And the Grand Lodge building was grand indeed, at least according to historian W.R. Holloway who described it as “…a sort of cross between a Gothic chapel and the Taj Mahal.”

By the early 1900s, however, the IOOF desparately needed more space to serve its rapidly growing membership. Over the past 60 years, the number of local organizations in Indiana had jumped from 27 IOOF lodges serving 338 members to 749 lodges with an aggregate membership of 76,294. Finally in 1905, Grand Secretary W.H. Leedy recommended that the IOOF start looking for a new location to erect a more commodious Grand Lodge at a total cost not to exceed $150,000.  The old building on the corner of Pennsylvania and Washington Street would be retained as an income-generating property. 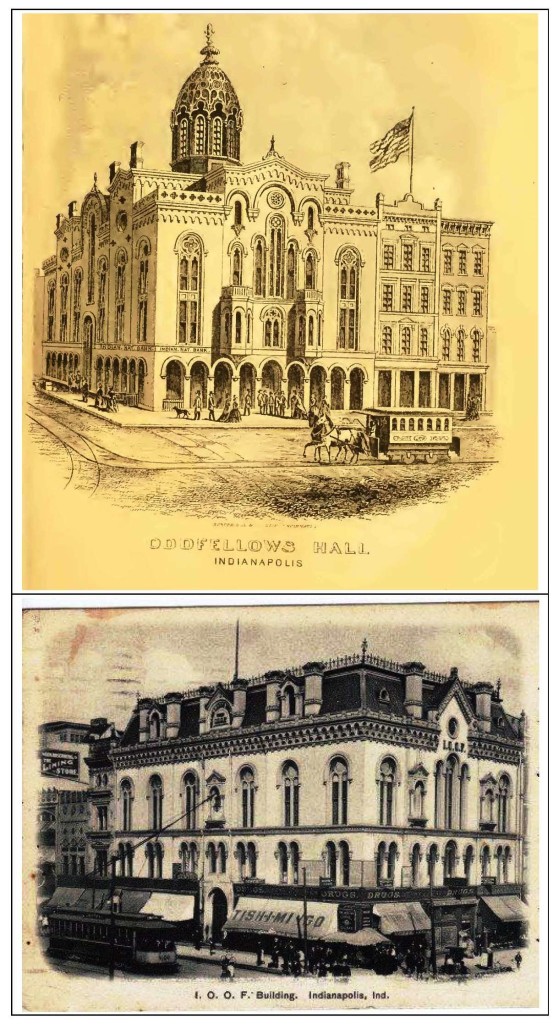 Shown above, top, is a rendering of the Odd Fellows Lodge as it appeared in 1870. Below is an image of the same building from a 1906 postcard. The changes to the roofline were likely done in the 1870s, when the Second Empire style was popular in Indiana.

The following year, a specially-appointed committee recommended that the IOOF purchase land adjacent to its existing Grand Lodge, which would then be razed to make way for the future home of the IOOF.  The plan was overwhelming approved by the membership, even though the total cost had now risen to $400,000.

The cornerstone for the new  IOOF building was laid on November 21, 1907.  Two yellowed Indianapolis newspapers from July 1854 that had been recovered from the cornerstone of the demolished building were among the items buried for posterity at 1 North Pennsylvania, where they presumably remain to this day.

A souvenir program from the official dedication of the Odd Fellow Building in October 1908 recently sold on eBay for $35.  The multi-page booklet included rare views of the building’s opulent interior as originally designed by architects Rubush & Hunter. 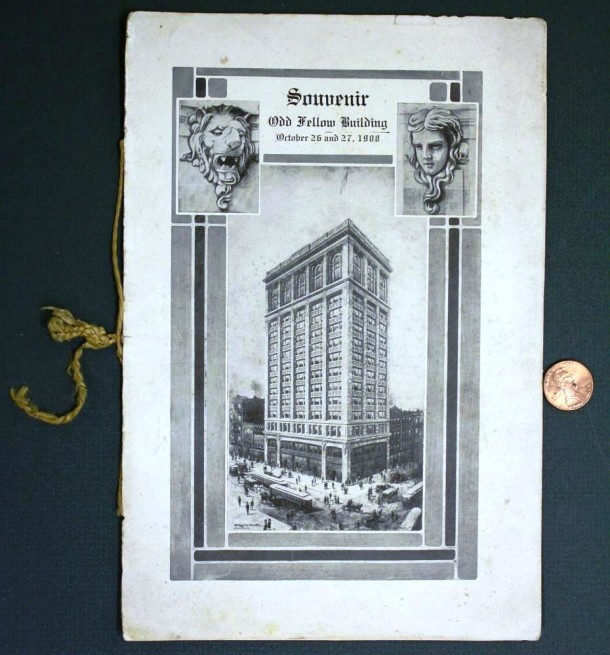 Although the photos are in black and white, a review of the “magnificent” new building by The Indianapolis Star on October 25, 1908 paints a vivid picture of the luxurious interiors, which featured three kinds of imported marble — white Italian, Pavanazzo, and Breche violet. The exterior was Bedford limestone and the red, green and cream tiles were made in Indianapolis by United States Encaustic Tile and “were the finest that money could buy.” But the Star’s highest praise was reserved for something more utilitarian – the noiseless water-operated elevators that were “guaranteed safe.” 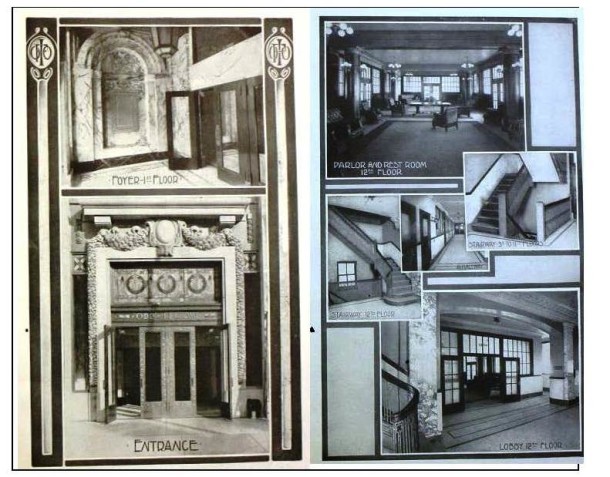 The first 11 floors of the building were leased to various businesses, which would help pay for building’s final price tag of $600,000. The 12th floor was dedicated for IOOF offices, and the top floor housed a 1,200 seat auditorium that boasted the finest acoustics in Indianapolis. 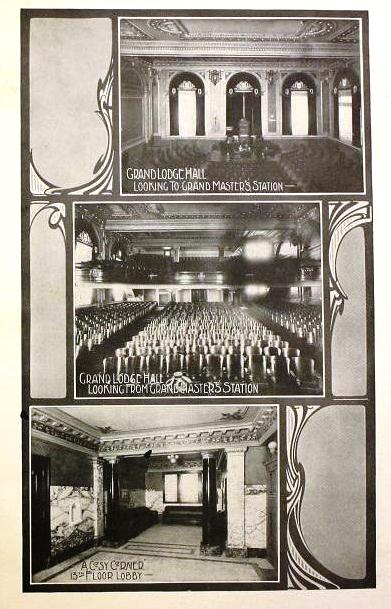 Although the Grand Lodge of Indiana was the site of many IOOF events during the first half of the 20th Century, membership steadily fell and the building was acquired by First Federal Savings in the 1960s.  The IOOF Grand Lodge relinquished its penthouse space at 1 North Pennsylvania and subsequently moved to its current headquarters at 5360 Rockville Road. 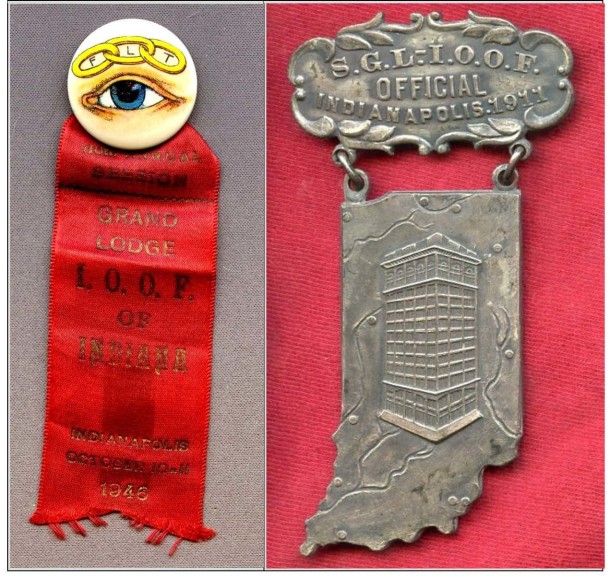 Like other secret societies, the IOOF has embraced a number of symbols whose true meaning may only be revealed to members .    The most commonly used IOOF symbol is a chain with three links and the initials “F L T,” which stand for “Friendship, Love and Truth.”  Another common symbol is the Heart-in-Hand. These and other IOOF symbols adorn banners, badges, robes, and even gravestones

The Rebekah Lodge is the female counterpart to the  IOOF, and its symbols include the Beehive, Dove, Lilly and Moon.

Antique and vintage IOOF items are popular with collectors, who are attracted to the strong and simple images.  As elderly members have died and declining membership has forced lodges to close, many items associated with IOOF rites have become available for sale. As of last night, there were 1,387 IOOF and Rebekah items listed on eBay. 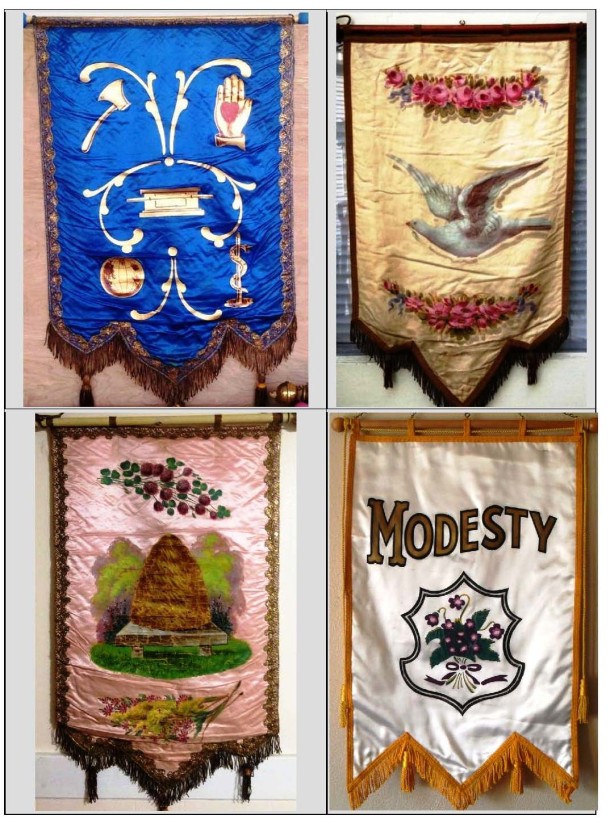 Silk banners with various Odd Fellows symbols are readily available on ebay. The four banners above all sold within the past month, at prices ranging from $152 for the banner with the beehive to $78 for the “Modesty” banner.

But there’s one IOOF symbol that you won’t find on eBay. In recent years, a series of gruesome discoveries have been made in or near IOOF lodges that are purportedly linked to Odd Fellow initiations.  In 1987, a worker renovating an IOOF lodge in Ava, Illinois, found a 100-year-old skeleton of a woman. In 1999, the new owner of an historic IOOF lodge in Bellevue, Idaho discovered human remains in a wardrobe drawer. And in December 2000, a bricklayer’s assistant in Indianapolis stumbled up an antique coffin and human skeleton in a grassy field near the IOOF Grand Lodge on Rockville Road.

Three days later,  the local lodge secretary stepped forward and claimed the coffin and bones. Apparently they had been stolen from a trailer outside the IOOF’s Grand Lodge.  But even under police questioning, IOOF officials remained mum about the purpose of the skeleton and coffin, hinting only that the items might be used in IOOF initiations to illustrate the difference between life and death.  However, they were very relieved that the items had been found because, as the lodge secretary later told The Indianapolis Star, “Human bones are hard to come by.” 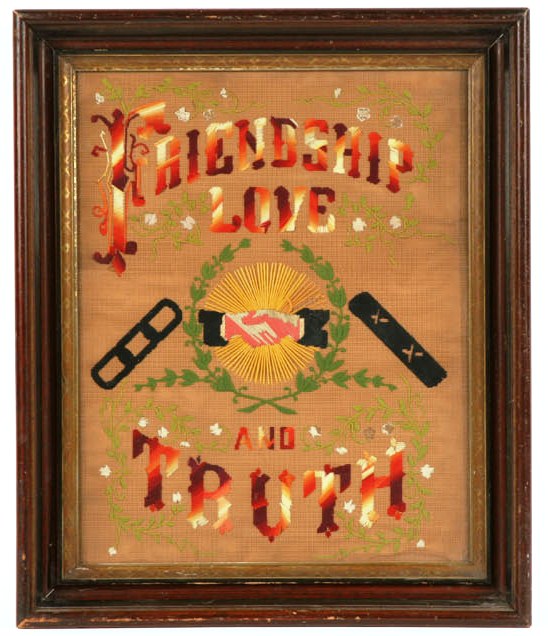