As Woodrow Wilson’s vice president, former Indiana governor Thomas Marshall certainly lived up to the promise he made in his inaugural speech to “acknowledge the insignificant influence of the office.”

Marshall frequently complained about his “nameless, unremembered duties,” which he presumed were concocted by Wilson to prevent him from doing any real harm to the administration. He stopped attending Cabinet after one meeting and asked to be moved to an office where he could put his feet up and smoke. It was this latter vice that gave Marshall his major claim to fame.

As the story goes, Marshall was presiding over the U.S. Senate when a senator from Kansas launched into a long-winded diatribe about “what this country needs.” Marshall listened patiently for awhile, but finally leaned over and whispered to a clerk that the senator had completely missed the point. “What this country needs,” Marshall said, “is a good five cent cigar.”

Marshall may have been an ineffectual vice president, but he was even less effective as a trade ambassador for his adopted city of Indianapolis. During his term as governor, there were more than 30 local cigar factories churning out five cent cigars, including the Rauch Cigar Company, one of the city’s oldest and largest cigar manufacturers. It’s likely that Marshall sampled more than his share of five cent Rauch cigars while governor — only to disparage their quality a few years later from the bully pulpit of the vice presidency.

German immigrant John Rauch got his start in the cigar business at the age of 11 when he was apprenticed to a cigar maker in Cincinnati. After working as journeyman cigar roller and opening small cigar factories in Brookville and Connersville, Rauch moved to Indianapolis in 1871 and started a cigar factory with his brother. This shoestring operation offered a single brand of cigars which was dubbed “Two Brothers” and sold in a wooden box featuring a photograph of the siblings. 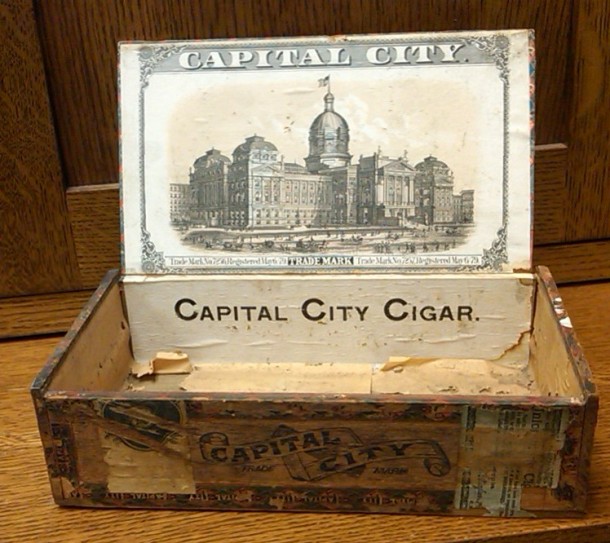 In the late 1870s, Rauch bought out his brother’s interest and struck out on his own. A shrewd businessman, Rauch quickly capitalized on the publicity surrounding the construction of Indiana’s new Statehouse, and trademarked one of architect Edwin May’s sketches as artwork for his Capital City cigar brand. Rauch understood that an attractive label helped sell cigars because people would keep wooden cigar boxes long after their contents had gone up in smoke. Whether a particular box was consigned to the chicken coop or displayed on the smoker’s desk, however, depended on the label’s design.

During the 1880s, cigar manufacturing became big business in the capital city, with more than 90 different cigar factories. By the turn of the century, Rauch employed more than 100 workers and produced fifteen different brands.  A period of rapid consolidation followed over the next two decades, however, as newly enacted child labor laws forced cigar manufacturers to look elsewhere for cheap labor.

Around 1916, the elder Rauch was replaced by his son, Edward, who angered the Cigarmakers’ International Union by asking workers to take a 50% wage cut. By the mid-1920s, Edward Rauch had solved his labor problems by employing young women to roll cigars. 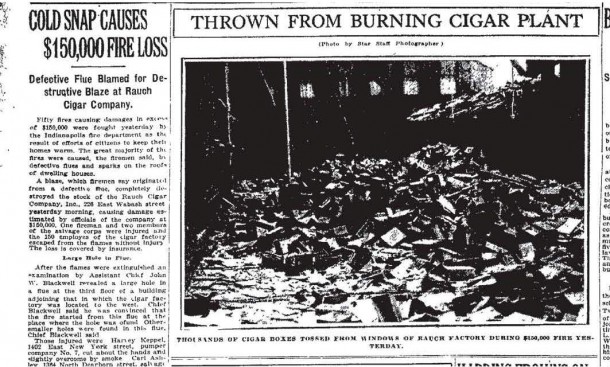 In February 1923, a fire started in a defective flue and destroyed the entire stock of the Rauch Cigar Company. The company's 150 employees – described as "girls" by The Indianapolis Star – were safely escorted out of the building and given shelter at Tomlinson Hall.

Over the years, the Rauch cigar factory launched a number of popular brands, including a five cent cigar celebrating the nation’s first coast-to-coast auto highway. Although the Lincoln Highway did not run through Indianapolis, it was the brainchild of Speedway founder Carl Fisher, who first pitched the idea to investors during a 1912 dinner at the Athenaeum. Other Rauch brands included Melrose, which at its peak was one of the best-selling five cent cigars in the country, and the more expensive Hoosier Poet, which sold for a dime. 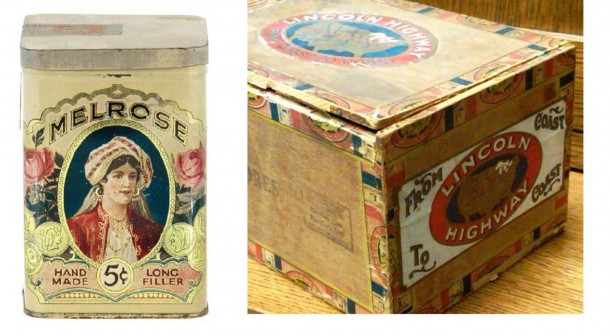 The origin of the Melrose name is uncertain; however, long-time Indianapolis residents may remember that prefix for downtown Indianapolis phone numbers (63) stands for Melrose (ME).

By 1930, the number of cigar manufacturers in the city directory had dwindled to fewer than a dozen. The Rauch Cigar Factory was no longer operating, and its Lincoln Highway and Hoosier Poet brands had been sold to the N.N. Smith Cigar Company in Frankfort, Indiana.

The Smith factory was eventually acquired by the National Cigar Company, which still operates a cigar factory in Frankfort. An old cache of cigar bands for the Hoosier Poet and Lincoln Highway brands was uncovered in the factory, and may be viewed on the company’s website. 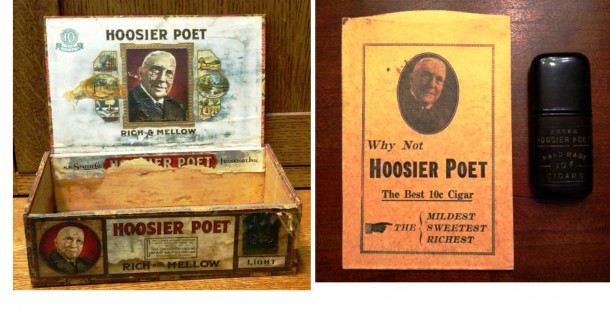 During the heyday of the five cent cigar, out-of-state cigar manufacturers sought to capitalize on Hoosiers’ love affair with tobacco by producing Indiana-themed brands. The Pride of Indiana cigar was manufactured by Berning Brothers in Cincinnati, and the Sol Meyer factory in Chicago was responsible for the tongue-twisting Indianian. 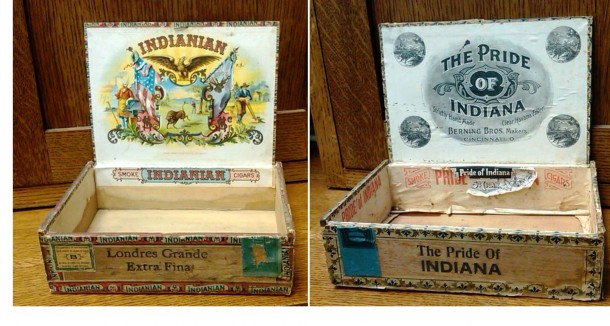 Indianapolis’ location as the political epicenter of Indiana also proved to be a rich source of material for cigar manufacturers throughout the state. The Senator Kern was manufactured by Frank Korby of Kokomo. Kern was originally from Alto, a small berg just outside of Kokomo, but moved to Indianapolis to practice law after he served a term in the state Senate. After a string of electoral defeats for the Indiana governor’s office and the vice presidency, Kern was elected to the U.S. Senate in 1910, where he rapidly rose through the ranks to become the body’s first unofficial Majority Leader. Despite his political success, Kern and his family maintained a modest home in Indianapolis at 1836 N. Pennsylvania, now the site of a parking lot.

The Tom Hendricks was produced by Temple & Shaw in South Bend. As mentioned in a previous Indianapolis Collected, The Name Game, Hendricks was a former Indiana governor and U.S. Vice President who was one of the founding partners of the law firm where I work today. 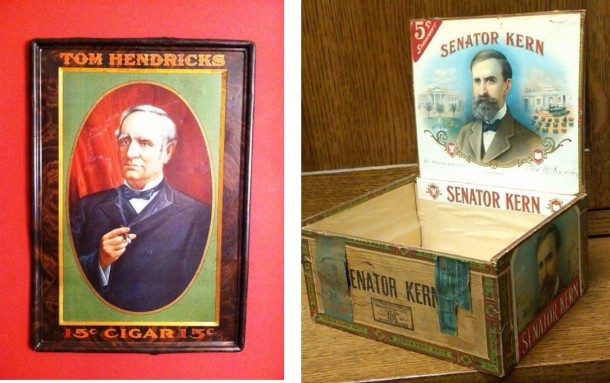 A close look at the tin sign pictured above shows that Tom Hendricks cigars originally sold for 5 cents. The "1" was painted in at a later date.

As to Marshall, he returned to Indianapolis in 1921 after serving two terms as vice president, and took up permanent residence at 1939 N. Illinois. In 1922 President Harding appointed him to the Federal Coal Commission, but otherwise Marshall insisted he had retired. “I don’t want to work,” he said. “[But] I wouldn’t mind being Vice President again.”

In the years following Marshall’s death in 1925, it was discovered that Marshall’s famous “Five Cent Cigar” quip was actually penned by humorist Kin Hubbard, who put the words in the mouth of his popular “Abe Martin” character. A fan of the comic strip, Marshall simply picked up the phrase and made it his own.

Although Marshall was showered with free samples of five cent cigars after he made his offhand quip, Hubbard got the last word. He licensed his Abe Martin character to the Burdena Cigar Factory in Indianapolis, which manufactured the five cent Abe Martin cigar. “By Ginger!” exclaimed Abe. “It’s good.” 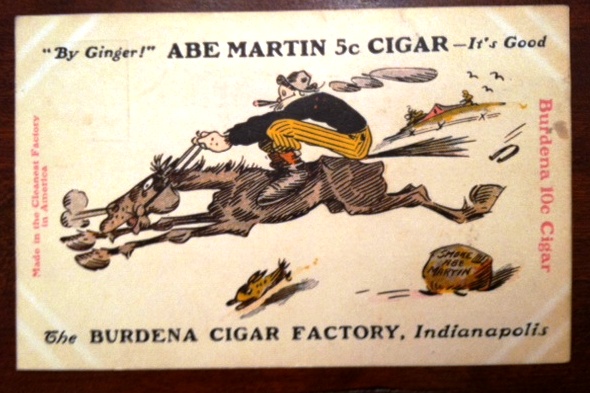