During the first week of June 1903, aspiring publisher George McCulloch paid a hot air balloonist $650 to drift over the countryside and drop 500,000 paper stars. Indianapolis residents were puzzled by this strange turn of events, which culminated on June 5 when thousands of additional stars were scattered from the top of the Soldiers & Sailors Monument.

The mystery of the falling stars was solved the following morning, when Indianapolis residents woke up to find a free copy of the inaugural edition of the Indianapolis Star on their doorsteps. Although it’s doubtful that any of McCulloch’s stars still exist, thanks to the “newspaper wars” that raged in Indianapolis for more than 100 years, collectors can easily find a wide range of promotional items that were used to help hawk the Star and its numerous competitors.

At a time when most of the other morning newspapers were backed by political parties, the Star billed itself as “an independent newspaper for the people”, selling for 7 cents a week or 1 cent a copy. Focusing on these key attributes, one of the Star’s earliest promotional items was a tin match holder, meant to hang above the kitchen stove and remind the lady of the house when she lit the fire for breakfast that her family needed a morning paper to keep abreast of the latest news. 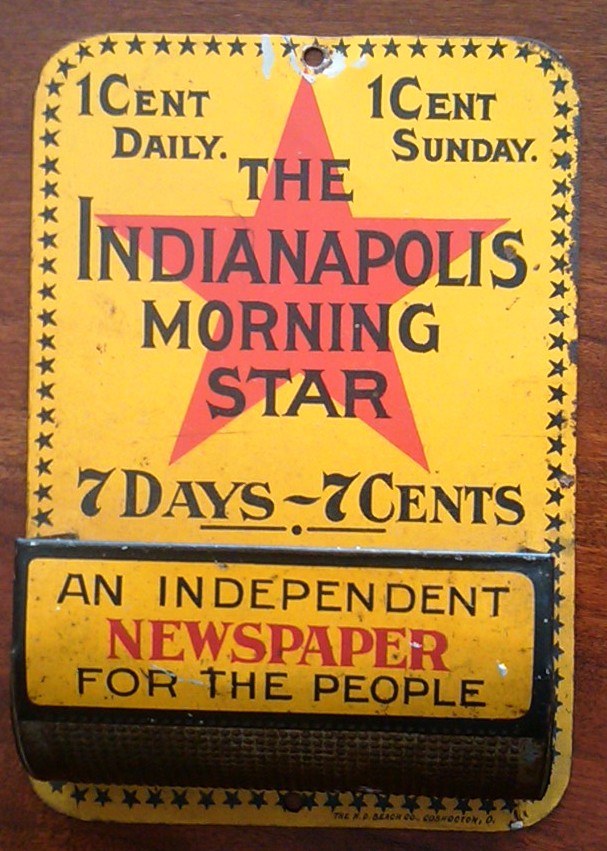 This Indianapolis Morning Star match holder and most of the other items featured in this article are from the collection of David Yount.

Such promotional items helped push circulation in a market that was already saturated with news print. The Indianapolis Journal and the Sentinel, both morning papers, had been the voices of the Republican and Democrat parties, respectively, since Indiana’s pioneer days. The Indianapolis News, an independent 2-cent afternoon paper, was first published in 1869 and was going strong at the turn of the 20th century. The Indianapolis Sun and the Indianapolis Times were other local papers, as well. Competition was fierce for both readers and advertising.

During the newspaper wars, calendars were popular promotional items that were either given away as prizes or sold by newsboys for extra cash. This Indianapolis Journal calendar from 1902 featured Maude Adams, a popular American stage actress. Indianapolis News carriers hoping for a few extra bucks gave their loyal customers a Christmas calendar in 1890, and sold the “Gem Edition” in 1896, a little calendar book packed with inspirational sayings. 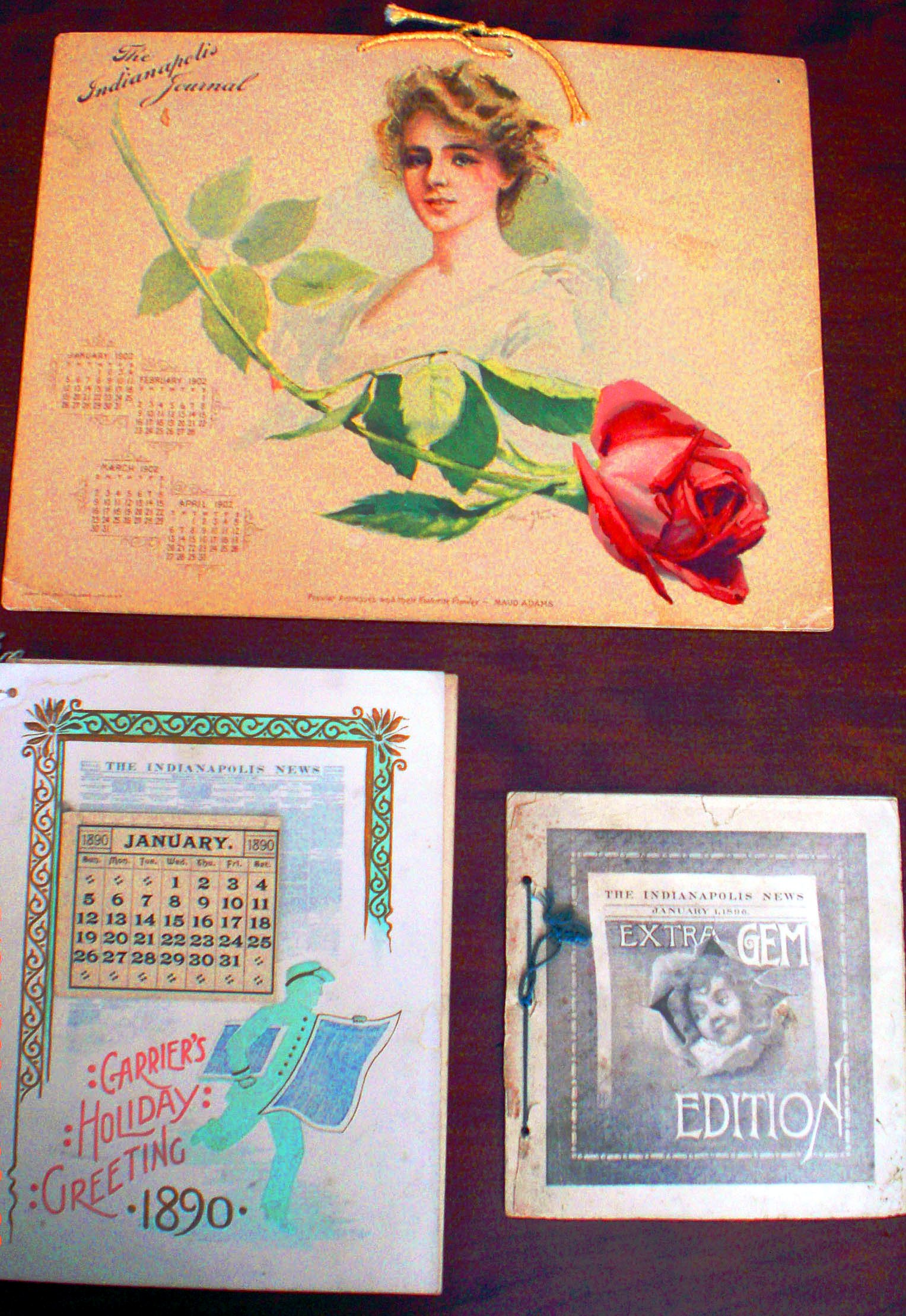 Thermometers were a more expensive promotional item but unlike calendars, hung on the wall for years as silent testimony to the newspaper’s accuracy (or lack thereof) in predicting the weather. This 30″ porcelain Indianapolis News thermometer bears the slogan “The Great Hoosier Daily”, touting the fact that during the mid-1900s, the News had the largest circulation of any paper in the state.

Newsboys played a vital role in promotional efforts by ensuring that newspapers got into the hands of paying customers. This role was originally filled by orphans and street urchins who sold papers on street corners for pennies a day. The plight of Indianapolis’ newsboys captured the attention of the National Child Labor Committee photographer Lewis Hine, who shot this photo of a barefoot boy selling papers on Washington Street in 1908. A few years earlier, Indianapolis philanthropist M.V. McGilliard had founded a Newsboys Home on North Alabama Street, which was the predecessor to the Indianapolis Boys Club.

With the passage of more stringent child labor laws, the job of newsboy gained respectability for enterprising youth. Eugene Pulliam, who bought the Star in 1944 and the News in 1948, started his journalism career in Lebanon in the 1920s carrying a newspaper bag exactly like the one pictured here. 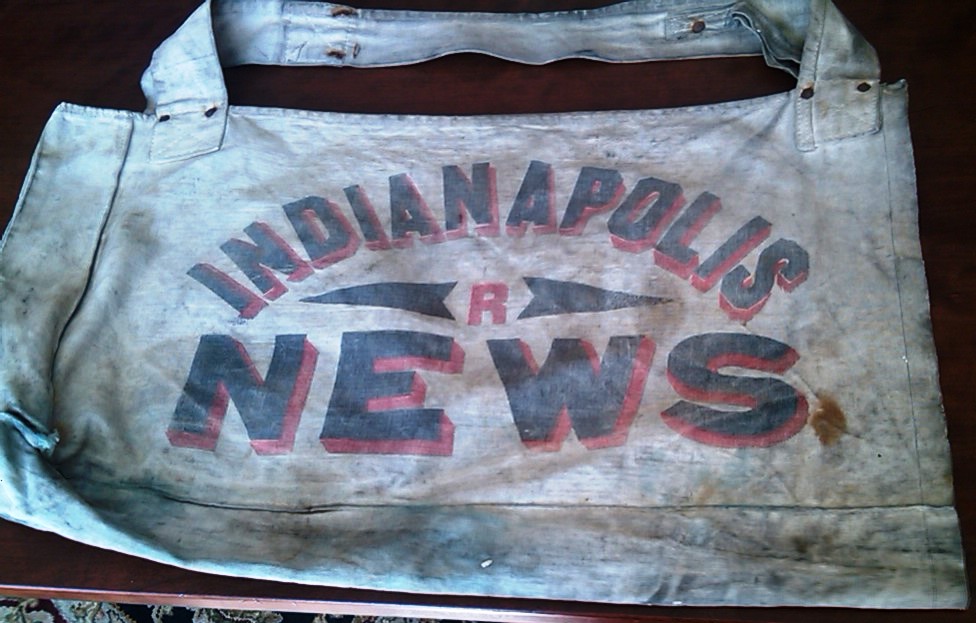 Newsboys also stood on street corners hawking special editions, including the Indianapolis News’ Green edition, which had the latest sports news, and the Blue Streak, which was the last issue of the day and featured market and sports news. These child-size newsboy aprons were purchased in 2009 at a local antique mall for $15 each. 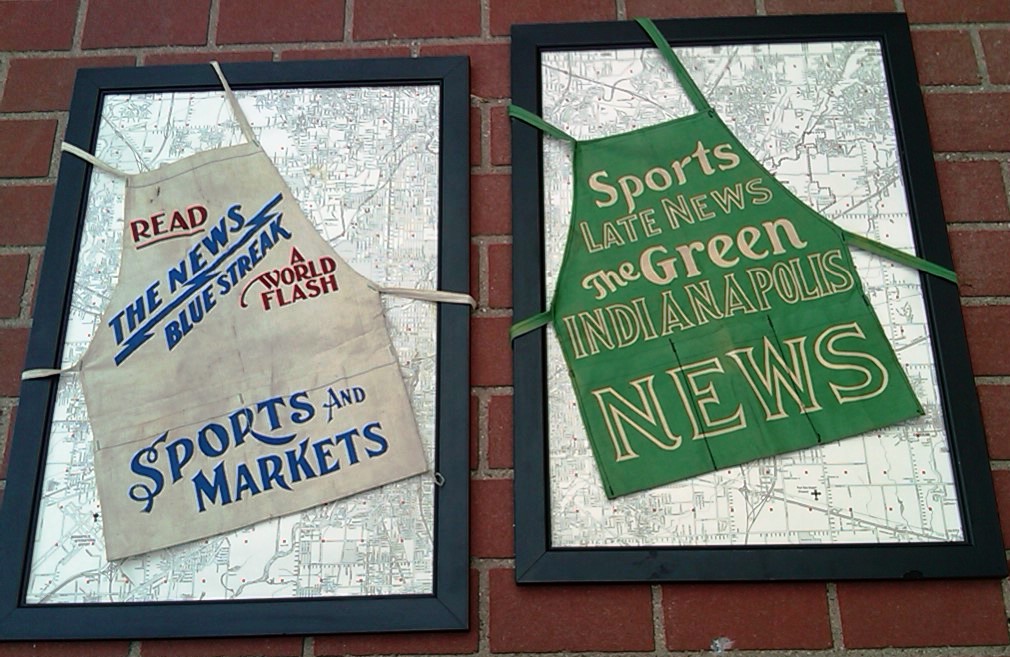 If you look closely at this photo from the 1930s, you’ll see a boy on the far left wearing a Green edition apron. 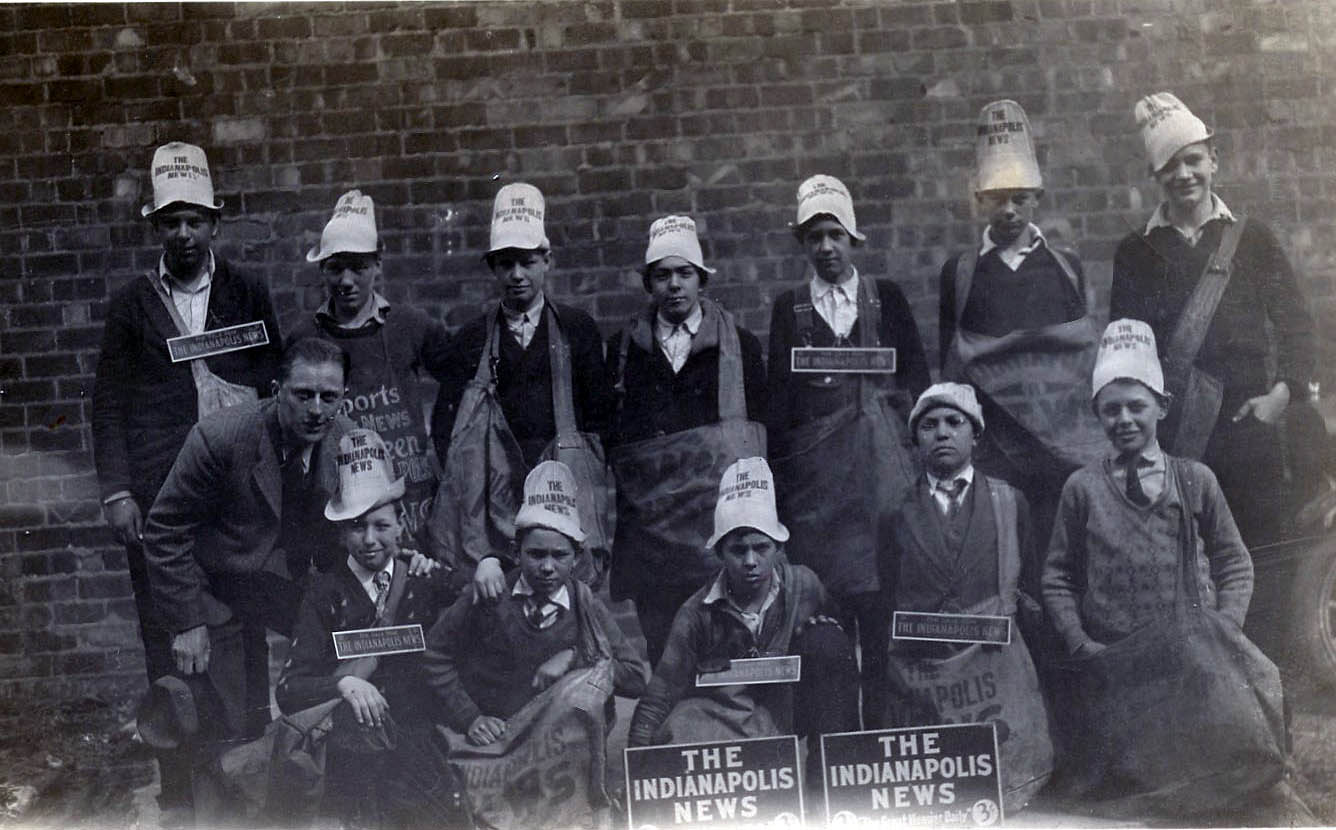 Being a newsboy was not all work and no play. The News established a long-running Newsboys’ Band, pictured here at the 1893 World’s Fair. 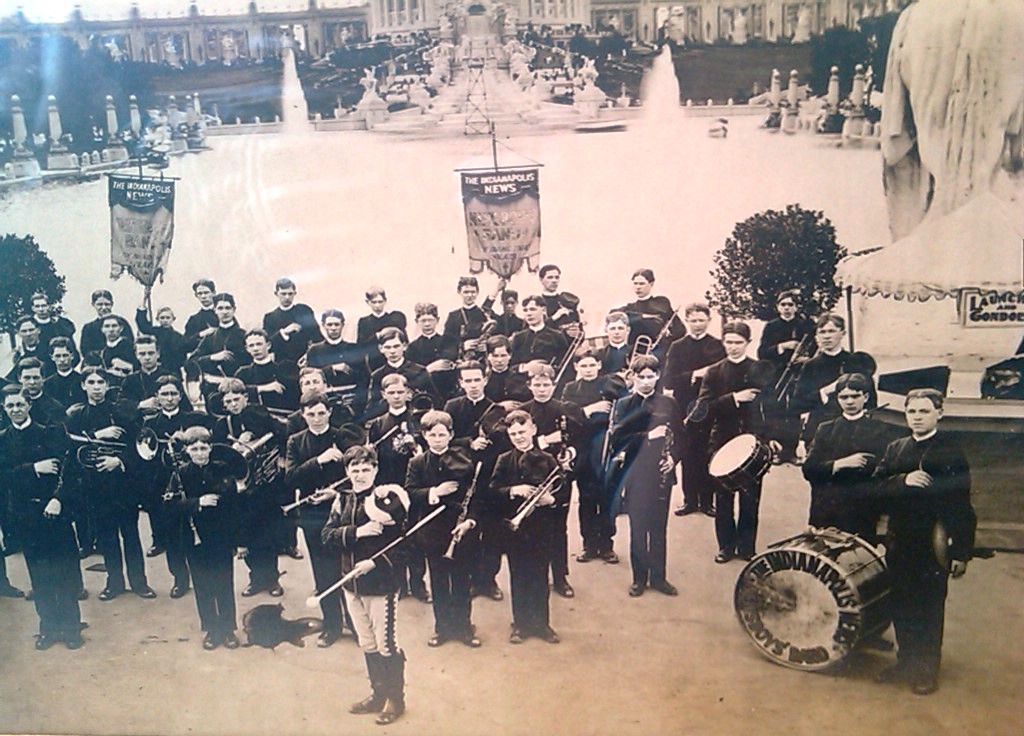 Star carriers in the early 20th century were provided sturdy wooden wagons, which doubled as toys. 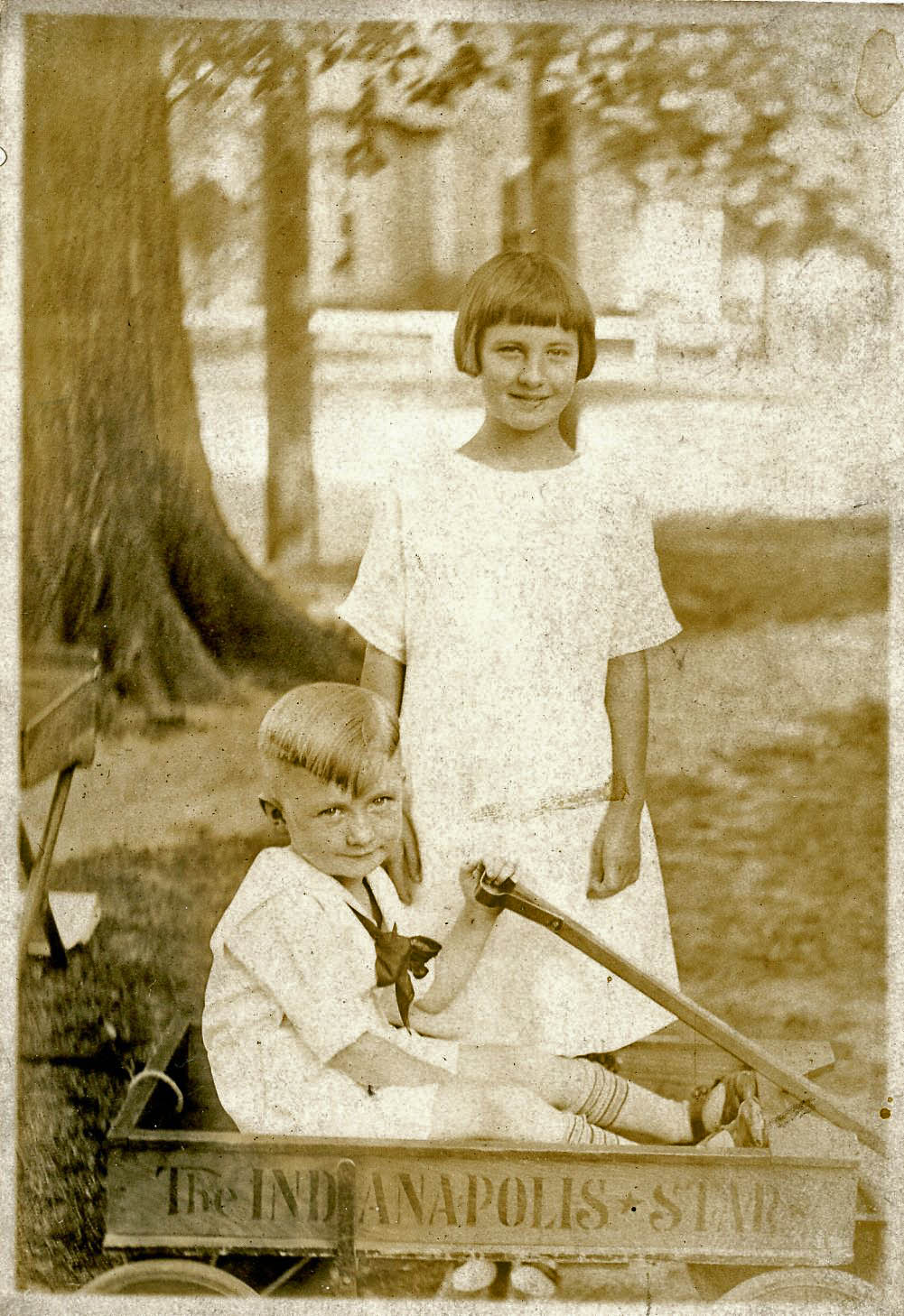 Given the exposure to horseplay as well as the elements, surviving examples like the one pictured here are rare.

In 1963, the Star celebrated its 50th anniversary with a special edition that promised readers “you can be sure that The Star will be in the forefront of the journalism of the atomic age and ages yet to come just as it has been throughout the automobile and airplane ages.”

By the time the Star celebrated its 100th anniversary in 2003, it had outlasted all of its daily competitors, including the News, which rolled off the presses for the last time on October 1, 1999.

Whether the Star can survive the Internet age remains to be seen. But here’s hoping that long after the presses give way to the ethereal cloud, there will still be plenty of tangible reminders of the days when print journalism thrived in Indianapolis. 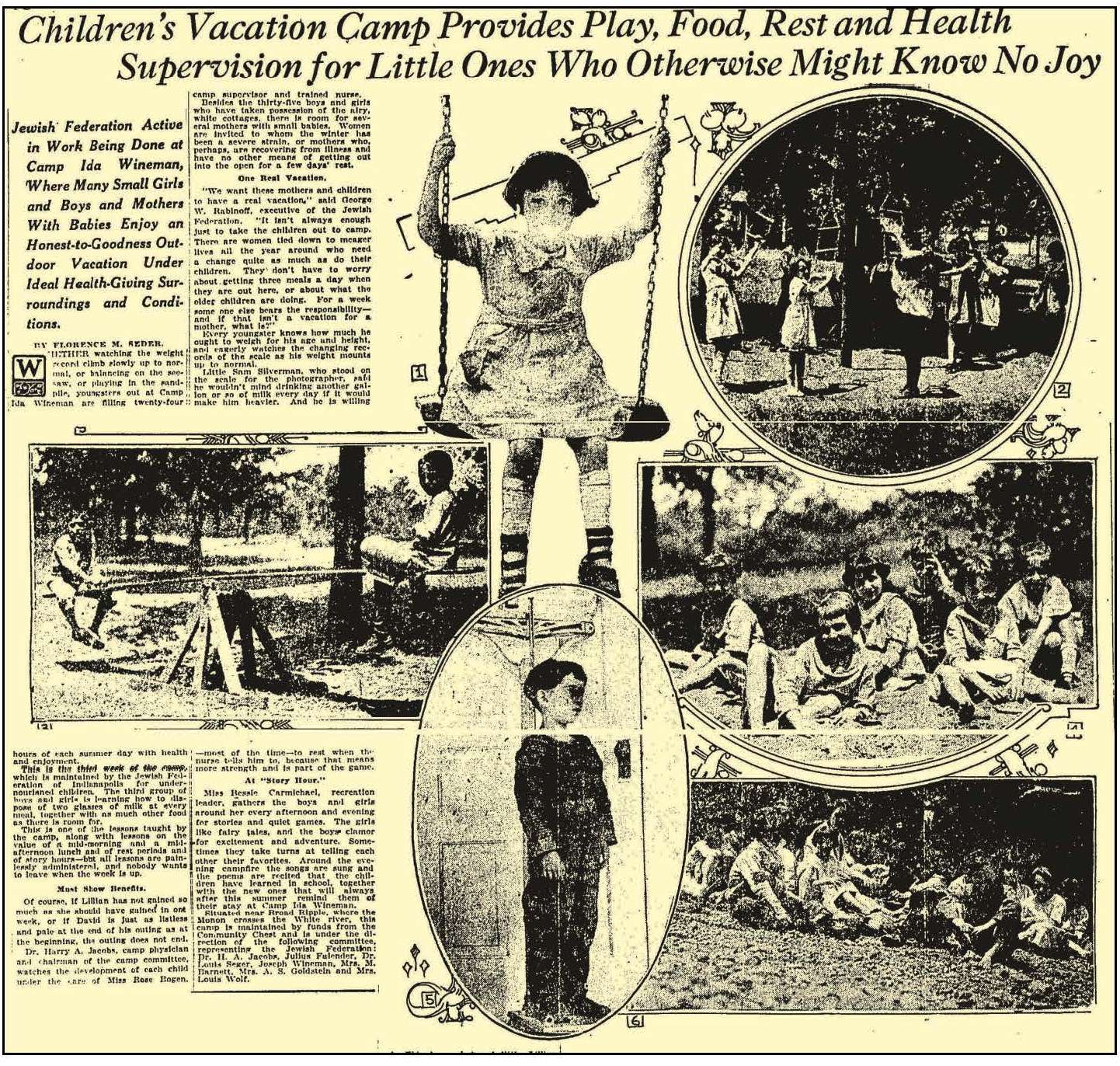