If you watch a lot of horror movies, you could easily believe that the biggest maintenance problem faced by owners of old houses is cleaning up the blood that drips from the ceiling during every thunderstorm and dinner party.  Even in an old black and white movie, it looks messy, nasty, and frankly just a little bit scary.   But it’s really nothing unusual, as columnist Dave Barry noted. “With these older homes,” Barry wrote in 2003, “you’re going to have a certain amount of ceiling blood.”

In 1906, Indianapolis grocers attempted to conjure up an equally frightening vision of ceilings dripping with red catsup in an effort to block passage of a local “pure food” ordinance.  Among other things, the proposed ordinance would have prohibited catsup manufacturers from adding benzoate of soda to the popular condiment.  A colorless, tasteless preservative, benzoate helped prevent fermentation while the catsup sat on grocers’ shelves or on kitchen tables. Without the preservative, a representative from Schnull & Co. warned, the contents of the bottle would explode and “the ceiling of every grocery in Indiana will be red with catsup.” 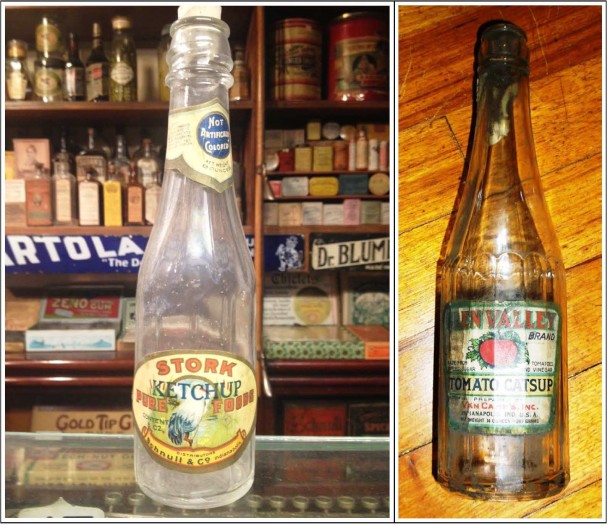 Stork Ketchup was bottled locally by Schnull & Co., and Glen Valley Tomato Catsup was manufactured by Van Camp Packing Co. Both companies used benzoate of soda in catsup in 1906. The bottle on the left is from the collection of Paul Lefkovitz, and the bottle on right sold last year on eBay for $50.

The Board of Health was unmoved by the grocers’ arguments. As reported on the front page of The Indianapolis Morning Star on September 7, 1906, its members were “heartless” and “intimated a fine disregard for all endangered ceilings.” However, they agreed to allow a small of benzoate if stated in large letters on the catsup label and if the manufacturers also agreed to abstain from adding any red dye to the catsup. So during the long winter of 1907, the ceilings of Indianapolis were safe from the hazard of exploding catsup but the catsup-consuming public was forced to eat brown catsup. 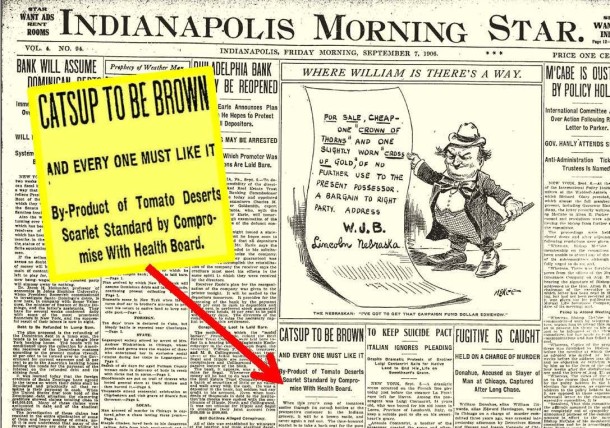 The Board of Health’s action to protect Indianapolis residents from the hidden dangers lurking in the catsup bottle was just the tip of the iceberg lettuce in a long-running battle over food safety.  Over the next decade, Indianapolis would become Ground Zero in a nationwide death match between pure food advocates and the powerful catsup lobby. The choice of battlefield was no accident, however. With its bountiful tomato crop, Indiana was home to many of the nation’s largest catsup manufacturers.  And the man who fired the first shot in the bloody Battle of the Catsup Bottle was a Hoosier physician and chemist who had once taught at Northwestern Christian (now Butler) University.

Harvey Washington Wiley was teaching chemistry at the recently opened Purdue University when he was offered the job of chief chemist of the U.S. Department of Agriculture in 1882. He decided to accept the position and move to Washington, D.C. after he was passed over the presidency of Purdue for allegedly riding a bicycle and engaging in other unorthodox behaviors.

Although Wiley was sympathetic to the agriculture industry, his real passion was food safety. As a physician and chemist, Wiley believed that many of the chemicals that were added to preserve, color and enhance the taste of food actually endangered human life.  To prove his theory, in 1902 Wiley recruited 12 able-bodied young men who agreed to ingest a diet of otherwise wholesome food liberally laced with borax, formaldehyde, sodium benzoate and sulfuric acid.

The newspapers quickly caught on to Wiley’s novel experiment, and dubbed the group of human guinea pigs “The Poison Squad.”  News coverage of the vomiting, headaches and other ills suffered by the young volunteers called national attention to the need for a pure food law. In 1906, Congress adopted the Pure Food and Drug Act, which soon became known as the “Wiley Law.” 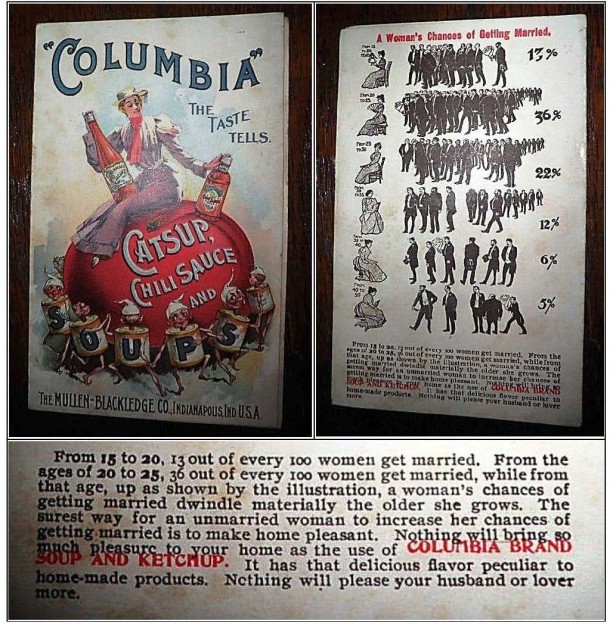 This pre-1900 brochure for Columbia catsup sold last year on eBay for an astounding $183. As shown above, the brochure stated that a woman between the ages of 40 and 50 had only a 5% chance of snaring a husband, but that the odds would increase in her favor if she used Columbia catsup because it had “that delicious flavor peculiar in home-made products.”

Although preservatives were not specifically addressed in the new law, in 1907 Wiley persuaded the Secretary of Agriculture to issue an order prohibiting the use of benzoate of soda. Offenders would face stiff fines and up to a year in prison.  Shortly thereafter, a series of articles touting the benefits of benzoate started cropping up, penned by the curiously named “Association for the Promotion of Public Health,” a group whose sole aim appeared to be preserving the ability of catsup makers to lace their product with preservatives. At the behest of these same manufacturers,  a special Referee Board of Consulting Scientific Engineers was appointed by President Roosevelt to challenge Wiley’s theories on benzoate.

At that point, Wiley wrote later in his autobiography, benzoate of soda in catsup became “the bloody angle of attack on the Pure Food and Drugs Act.”

Not content to sit on the sidelines while the federal government debated catsup, the Indiana General Assembly adopted legislation in 1908 that expressly banned benzoate.  The city’s two largest catsup makers were split, however,  on the relative merits of the preservative.  The Columbia Conserve Company maintained that preservative-free catsup would keep long enough to be consumed in any kind of weather. Not so, said Franklin Van Camp, of the Van Camp Packing Company. According to Van Camp, “the bottle is put on the table and sits there for three days or three months, and without preservatives, it would not keep.” 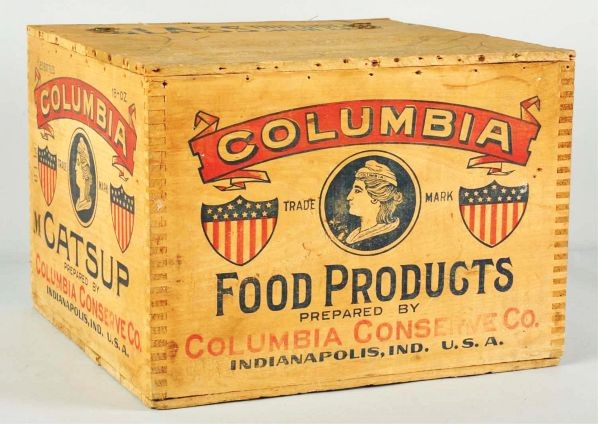 When the ban on sodium benzoate was initially discussed, some manufacters feared that fermentation would cause their catsup bottles to explode during transport. Shown above is an apparently unscathed packing crate for Columbia catsup that sold at auction for $325 in 2011.

Two out-of-state catsup manufacturers filed a lawsuit to block Indiana’s benzoate ban.  Attorney Edward Daniels (the “Daniels” in my law firm’s name, Faegre Baker Daniels) was appointed to oversee evidentiary hearings on the use of benzoate in catsup, which got underway in Janaury 1910. During the next 10 months, tales of unsanitary manufacturing methods, experiments on kittens, and Egyptian mummification methods emerged as a parade of witnesses took the stand to tell their side of the catsup saga.

During the hearings, the issue shifted from the use of benzoate as a preservative to prevent catsup bottles from exploding to the use of benzoate to cover up the taste of catsup made from rotten tomatoes and putrid factory waste.  The H.J. Heinz Company, which had developed a preservative-free recipe for catsup, ran a series of advertisements in The Indianapolis Star decrying the “drugged” catsup produced by other manufacturers, including local catsup magnate Franklin Van Camp. 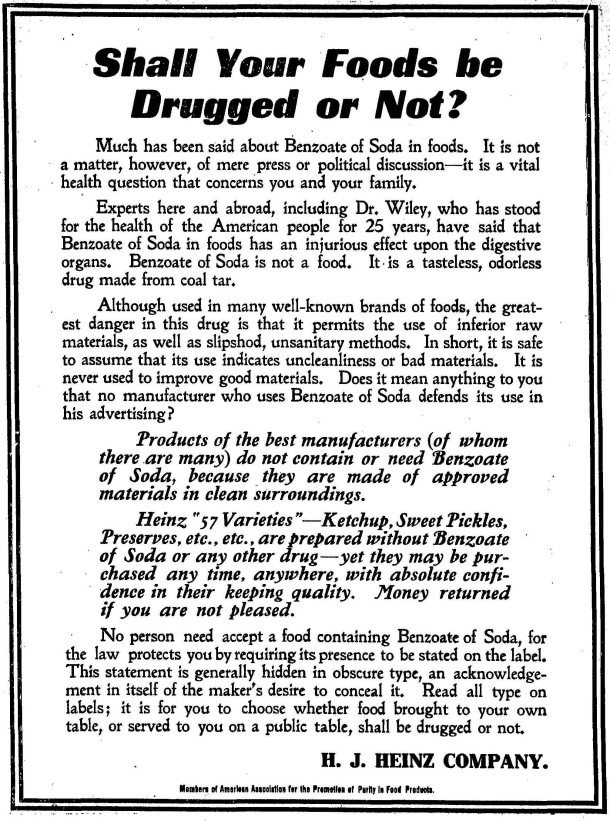 State Food Commission Harry Barnard testified that benzoate-laced catsup contained both cocaine and carbolic acid, while Michigan’s state chemist said that milk preserved with benzoate had been shown to kill kittens and puppies. But the most stomach-churning testimony came from USDA Inspector A.W. Bitting, who had tested nearly 1,700 brands of catsup and found that mold and spoilage were more common in catsup made with benzoate of soda because many of these catsups were made from rotten tomatoes and other garbage.

One of the more interesting twists in the hearing occured when Bitting’s wife took the stand. Trained as a chemist, Mrs. Bitting worked with her husband at the USDA’s experimental station at Purdue University, where she spent long hours looking at catsup samples under a microscope.  Despite her impressive list of published papers and academic degrees, the attorneys for the two out-of-state catsup companies questioned her qualifications and attempted to discredit her by asking whether she had any knowledge of the spices used to preserve mummies.

“Really, I would not attempt to discuss the preservatives used by the ancient Egyptians for mummies,” she said, acknowledging that her “association with the mummy family has been very limited.” But as the attorneys continued to press her for answers on the mummies’ secret, she retorted, “Any man who calls himself a scientist and purports to state what mummies were preserved with is not a scientist. I don’t think that scientific men fool around with mummies in this age.”

Even though the Star described her as “one of the most eminent authorities in the country on microscopic analysis of preserved food products,” it also failed to give her testimony serious treatment. While her husband’s testimony was reported in the news section, Mrs. Bitting’s comments were printed in the women’s section, next to a cutting-edge news story on the latest scarf-tying techniques. 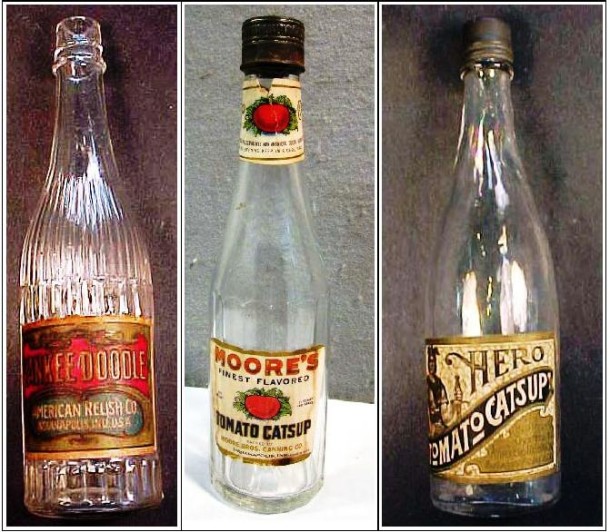 Yankee Doodle and Hero Catsup were bottled locally by the American Relish Company. In 1906, the New Hampshire Board of Health reported that Yankee Doodle Catsup was colored with coal tar dye and preserved with benzoate of soda. All three bottles shown above were offered on eBay last year, with the Hero catsup fetching $39 and the Moore’s and Yankee Doodle bottles selling for $20 and $13.50, respectively.

By the time the hearings concluded, most local catsup manufacturers had abandoned the use of benzoate of soda, including the Van Camp Packing Company, which testified in favor of the benzoate ban. The Indiana law was upheld by the district court, and in 1913, was affirmed by the U.S. Court of Appeals.  Meanwhile, U.S. Secretary of Agriculture James Wilson was sharply criticized after it was revealed that the USDA had paid the expenses of 75 different pro-benzoate witnesses who traveled to Indiana or gave depositions supporting the use of preservatives in catsup.

Benzoate of soda – or sodium benzoate, as it now called — is still used in foods today, typically as a preservative in salad dressings, pickles, carbonated beverages, and condiments. I checked my refrigerator this morning and found a couple of bottles of salad dressing with sodium benzoate listed as an ingredient.  Although I was relieved to find that my ketchup was preservative-free, it was a little disturbing to discover that the ketchup was apparently “Best if Used Before August 2013.”

Still, you might want to think twice before saying ‘Please pass the ketchup.” In 1909, Dr. John N. Hurty wrote an editorial in The Indianapolis Star warning Hoosiers against the use of catsup, preservative-free or otherwise. Hurty blamed the astringent spices in catsup for a myriad of woes, including dyspepsia, kidney and liver troubles, and constipation, which he called  “our national sin.”  But even though Hurty is widely regarded as the father of public health in Indiana, I have to question his credentials as a Hoosier because he also called catsup “useless” and “unneccessary.” But then again, it would be another 40 years before Tater Tots were invented.