Historic preservation experts from throughout the country gathered this week at the Indiana Landmarks Center for the 2013 National Preservation Conference.  A repurposed 19th century church, the Landmarks Center was beautifully restored in 2012 thanks to a $10 million donation by the late William Cook and his family.

During the conference, a smaller group of preservationists convened for a day-long session under the majestic stained glass dome of the old City Hall. This group was charged with brainstorming potential uses for the vacant building — a building that probably wouldn’t even exist today but for the efforts a century earlier of a different man who was also named William Cook.

This William Cook was a butcher, and in 1906, he started a war with city hall.  Not the actual building, but the institution itself – or more specifically, Mayor Charles Bookwalter.

The saga began in March 1906, when the Marion County commissioners ordered Bookwalter and his staff to vacate their offices in the basement of the old Courthouse.   The city was paying the county $4,000 per year to lease the dank basement offices, because unlike most major cities, Indianapolis lacked a city hall.  But now the county commissioners now wanted the space to house a new juvenile court. 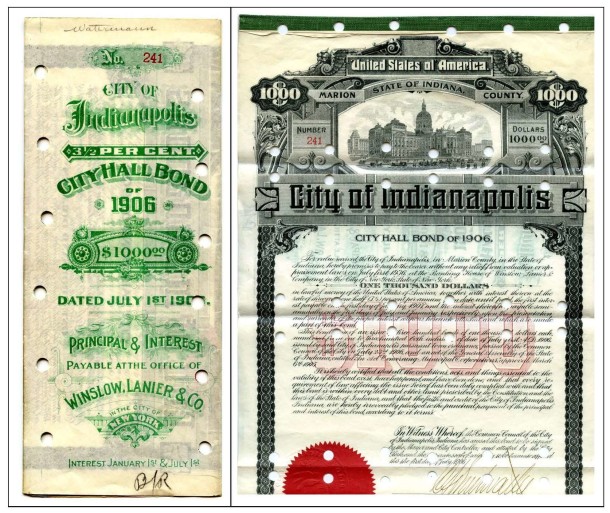 Seizing the opportunity to finally have a proper setting for the office of mayor, Bookwalter proposed a plan to build a new city hall on the north side of the Courthouse square, where the City-County building is presently located.  The building would face Market Street, and would be two and a half stories high, in the same architectural style as the library. Although Marion County owned the land, the county commissioners tentatively agreed to lease the space to the city for 999 years at a cost of $1 per year. Construction costs — estimated at $250,000 — would be covered by city-issued bonds.

Bookwalter’s plan quickly hit a snag, however, when the politically powerful Commercial Club launched a campaign to build a convention hall on the same location sought by the mayor for his new city hall. In addition to lacking a city hall, Indianapolis also lacked a state-of-the-art convention facility. According to Commercial Club president Alfred Potts, the convention hall would pay for itself in short order, and in fact could provide additional funds to the county through a revenue-sharing program.

The proposed location also drew fire from the Civic Improvement League, whose members believed that the new building would detract from the beauty of the Courthouse. The group’s leader, Col. M.A. Downing, argued that the administrative needs of the growing city could easily be accommodated by combining the city and county governments and adding a story or two to the Courthouse.  However, The Indianapolis Star blasted Downing’s proposal in a March 11, 1906 editorial, noting that while the Marion County Courthouse was “not a great work of art,” it was nonetheless a “very respectable piece of architecture” that would be rendered grotesque by the additional stories.

The Star went even further a few weeks later, calling on city leaders to combine the city hall and convention center into a single new building on the Courthouse square. “Indianapolis has two great needs, a city hall and a coliseum….Why not kill two birds with one stone?” the Star maintained. By combining the two facilities under a single roof, Indianapolis would be positioned to become “the” convention city for the U.S. and the headquarters for more national organizations. The Star believed that the Courthouse square had ample room to contain both the Courthouse and a joint convention center-city hall, but was not opposed to city officials looking elsewhere for a site.

City councilman Charles E. Davis took the Star’s suggestion to heart and came up with the idea of demolishing the relatively new City Market building and replacing it with an addition to Tomlinson Hall that would serve as both a convention center and city hall. The Civic Improvement League immediately endorsed the Market site as a more aesthetically pleasing alternative. Because some questions were already being raised about the legality of erecting a new city hall on county-owned property, Bookwalter decided that the proposed convention center-city hall would be constructed on the grounds of the market.

Under the successful plan, the ground floor of Tomlinson Hall would continue as a market but the top three floors would be converted for use as city offices.  The mayor and his staff would be housed on the second floor, and the Board of Health, city engineer, and city attorney would have offices on the third floor. The top floor would be reserved for use by the City Council.

A massive auditorium with a 11,500 seat capacity would be erected on the east side of Tomlinson Hall, replacing the market building.  In addition, the site would continue to be used as a market, although vendors would be relegated to a partially submerged basement in the new coliseum.

Scherrer’s plan, shown below, was rejected because it proposed separate buildings for the city hall and coliseum.  The right of the city to erect a freestanding coliseum had been questioned in court.  However, the city attorney opined that it was perfectly permissible for the city to provide a convention hall in connection with a building for city offices. 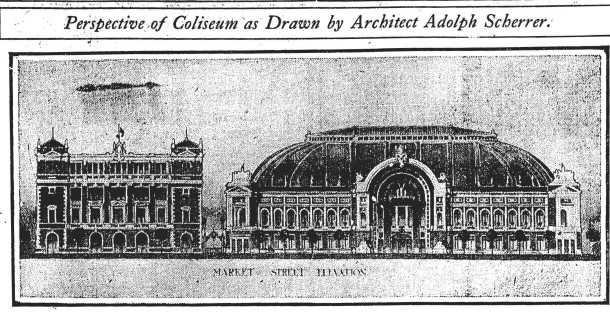 The proposed city hall-convention center was met with widespread public support, except from Cook and the other butchers, who would soon be evicted from Tomlinson Hall and forced to peddle their meat from the basement of the new building. So Cook and his fellow meat men pulled out the sharpest knife in their drawer – a prominent local Democrat attorney named Muter Miller Bachelder who filed a series of creative lawsuits that ultimately beat city hall.

The first lawsuit was filed on August 9, 1906 by William Cook, his two brothers, and about 40 other meat men. In the litigation, the unhappy butchers charged that they were burdened as taxpayers with paying for a building that would be solely used for amusement purposes. They further contended that the city could not use the market site for any purpose other than a market. The judge ruled in the Cooks’ favor but allowed Bachhelder to amend and refile the complaint. The butchers fared no better in the second lawsuit, with the judge siding with the city on every point.

The third time also failed to be a charm for Cook and his fellow meat men. The third lawsuit filed by Cook challenged the ordinance authorizing construction of the new city hall-convention center.  After the judge upheld the ordinance as valid, it finally appeared that every obstacle blocking the path of the new complex had been removed.

Construction contracts were signed in late April 1907, and temporary wooden sheds were erected to house the market stalls during construction. On May 4, however, Cook was back in court with more of his “pestiferous litigation,” as his serial lawsuits had been dubbed by city attorneys.  But after three failed attempts, Bachelder had finally found a winning argument.  On June 26, the court issued a permanent injunction against the erection of the proposed coliseum, holding that the city could not lawfully construct a building on the East Market street site that materially interfered with its intended purpose as a market, and that the city could not build a coliseum anywhere.

With Plan B now tanked, Bookwalter reverted to his original Plan A – erecting a new city hall on the north side of the Courthouse square. The Civic Improvement League again urged that the land be left as much-needed urban park space.  As a compromise,  the County Council offered to add a new wing to the north side of the Courthouse and lease it to the city for $14,000 a year. With city coffers already drained from fighting Cook’s repeated lawsuits, the price tag was simply too steep.  An alternative site was selected two blocks away on the northwest corner of Ohio and Alabama streets. 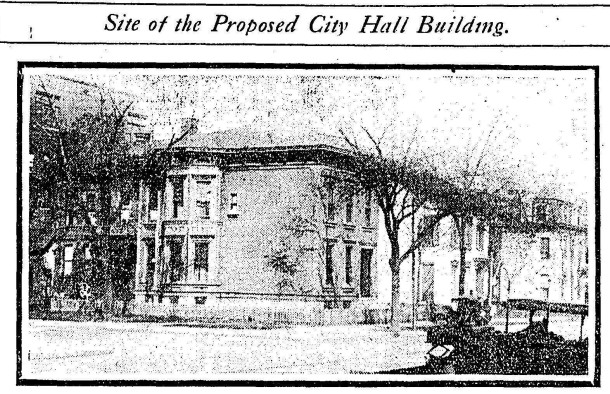 Three houses stood on the site selected by the city, but the original owners had long since moved north and the buildings were now used as an apartment house, a boarding house and headquarters for a fraternal organization.  The houses were razed, new plans were drawn up by Rubush & Hunter, and the cornerstone of City Hall was laid with much ado on September 27, 1909. 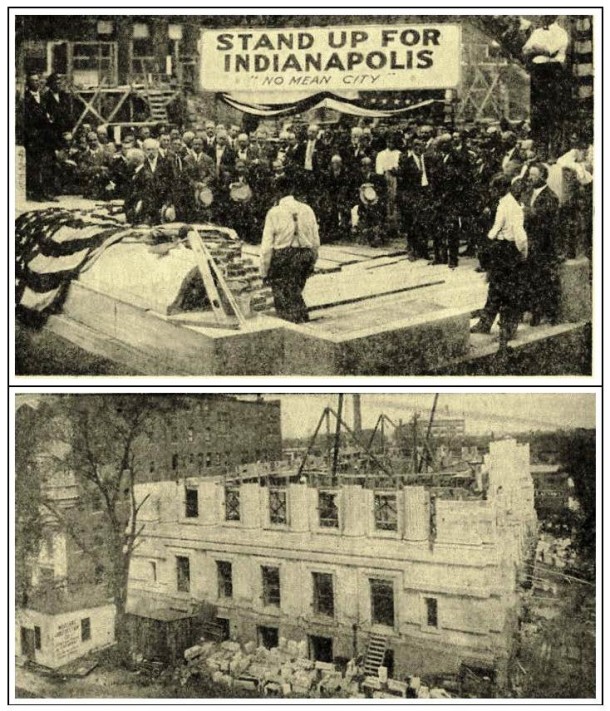 “When the score of decades shall have rolled away, the descendants of the Cook family, to the eighth and ninth generation, shall stand in the north door of the City Hall on the Court House Square and point with pride at the noble old pile that their forefathers so ably defended from the assaults of a hostile administration.”

The Star’s prediction never came true, but the descendents of William Cook and his brothers can take pride, in a perverse sort of way, that their ancestors actually saved City Hall when they beat city hall.

Although City Hall is currently vacant, at least it’s still standing.  If Cook had called it quits after his third loss in court and the city had proceeded to demolish City Market and replace it with a combined coliseum-city hall, the odds are pretty good that the latter building would have been demolished as well with the advent of Market Square Arena.  And had City Hall been erected adjacent to the Courthouse, it would most certainly would have been sacrificed for construction of the City-County Building. So in the end, Cook’s “pestiferous litigation” started a chain of events that left the citizens of Indianapolis with an architectural treasure. 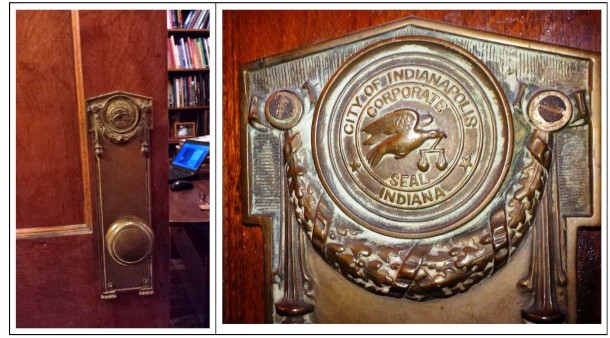 Some years ago, I bought two sets of doorknobs from the old City Hall on ebay for $35. The seller didn’t have much background information, and I’ve always assumed that the doorknobs and back plates had been removed from a door that was scrapped during one of the building’s multiple uses. They’re currently on the pocket doors to my home office, but I will gladly return them to City Hall if they are needed in the building’s next life.