The discussion was as heated as the weather when a group of five men gathered around a small wooden table in June 1820 to select the site for the new state capital.  Three potential locations were on the table: William Conner’s farm in present-day Hamilton County, the Bluffs of the White River in future Morgan County, and a small pioneer settlement near the mouth of Fall Creek in Marion County.

In a decision that likely haunts the dreams of Carmel Mayor Jim Brainard, the group rejected Hamilton County outright as the location for Indiana’s new capital. Instead, Fall Creek prevailed over the Bluffs on a narrow 3-2 vote. Although it would be another six months before the legislature made the selection official, for many years thereafter June 7 was widely celebrated as the birthday of Indianapolis. 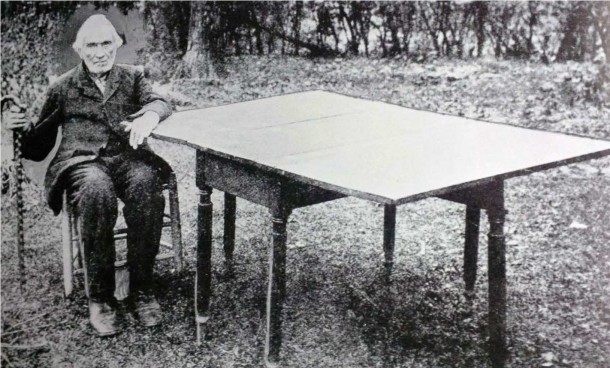 Amos McCormick, a descendant of Indianapolis’ original settler John McCormick, is shown above seated at the table used by the commissioners when they met at McCormick’s cabin on June 7, 1820 to select the site for a new capital. The table was stored in the basement of the Statehouse for some years, but has since disappeared.

By the time the city’s 100th birthday rolled around in June of 1920, civic leaders were not content with a simple one-day celebration. Instead, a mammoth five-day extravaganza was planned to honor the city’s past, celebrate its progress, and speculate about the promise of the next 100 years.

The centennial celebration got underway on Saturday, June 5, with speeches and music at Tomlinson Hall.  The party moved to the fairgrounds the following day for performances by the Cincinnati Orchestra. On the night of the city’s official birthday, an estimated crowd of 150,000 people – more than half of the local population – thronged the downtown area for a massive parade with 122 electrically lit floats representing every phase of the city’s development.

But the real drama occurred on Tuesday, June 8, with debut of the Centennial Pageant. Featuring dancing, music and a cast of nearly 2,000 residents, the Pageant showcased major events of the city’s first century.  Local amateur actors portrayed real-life historical figures, including Kurt Vonnegut, Sr., who was cast in the key role of Hervey Bates, the city’s first sheriff and the proprietor of the Bates House hotel.  The grand finale literally brought down the house when the entire cast rose and started singing “Glory, glory, Hallelujah! In-di-an-ap-o-lis!” to the tune of the Battle Hymn of the Republic. The sold-out performance was repeated the following night by popular demand. 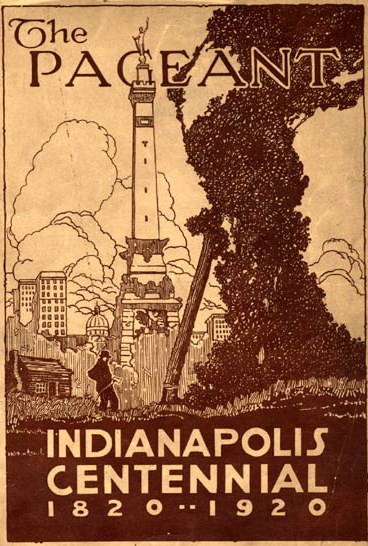 I’m familiar with the state’s Centennial in 1916, but I didn’t realize that Indianapolis held its own Centennial bash until I found a tattered copy of the souvenir program at a local antique mall. In addition to details of the celebration and a brief local history, the booklet also featured several pages of illustrations comparing Washington Street scenes of 1854 with the same view in the early 20th century. Although the streets scenes were crudely sketched, it appears that only a handful of commercial buildings from the pioneer heyday survived to see the Centennial.

According to an editorial in The Indianapolis Star published on June 7, 1920, the reason for this dramatic change was because the city’s earliest residents could not have foreseen such wonders as railroad trains, horseless carriages, telephones, telegraphs, and flying machines.  And even if they had an inkling of these miraculous inventions, the pioneer residents were too busy struggling to survive to plan for 100 years in the future.

The next century would be different, the Star opined. Indianapolis of 1920 was planning for the future, planting trees to replace those cut down by the pioneers and building a park system that, if properly carried out, would be “a dream of beauty” in 2020. Further, city planners and developers were giving thought to architecture and the placement of buildings, so “that in the normal order of things will look 100 years from now as they do today.” 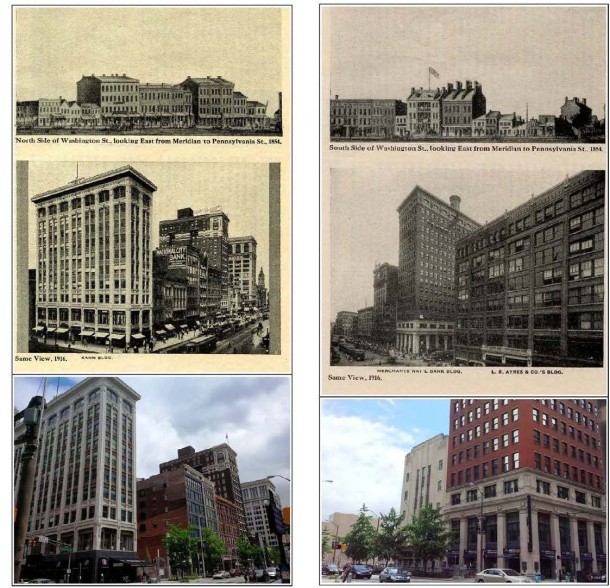 Did the Star’s 1920 prediction come true? While the changes wrought to Washington Street by the past 100 years are dramatic, nearly every block has at least one building that dates back to 1920 and one stretch (the north side of Washington Street from Meridian to Pennsylvania) is close to a mirror image of its early 20th century self.

The Centennial of 1920 was an opportune time for city leaders to take stock of the changes to the streetscape. Although Indianapolis had spent the past century evolving from a remote pioneer settlement to a densely populated hub of commerce, some of the most significant changes occurred during the first two decades of the 20th century with the advent of the automobile.  And much as we mourn the loss of historic buildings today, the city’s residents of 100 years ago also grieved when familiar landmarks were felled in the name of progress.

“One by one, the landmarks that for years have made the center of Indiana’s capital city picturesque are disappearing, and in their places great business blocks of the modern time are rising, monuments to the historical spots which they cover,” the Star reported in March 1906. “The destruction of old buildings, which has been so marked during the past few months, carries with it a certain feeling of regret and pity…But as though doomed by fate, the old buildings must disappear to accommodate the growing city.”

The construction of the federal building in 1903 required the demolition of numerous private homes and commercial buildings, some of which were viewed as important landmarks. A smattering of old houses were left in place during construction, with residents permitted to remain in their homes as the new federal courthouse and post office rose in the background. When the site was finally cleared in January 1904, the Star observed that “Indianapolis will be given a genuine surprise, as the new Federal Building will show up in a manner very imposing.”  In celebration of its centennial, the federal building was recently renovated at the cost of $70 million. 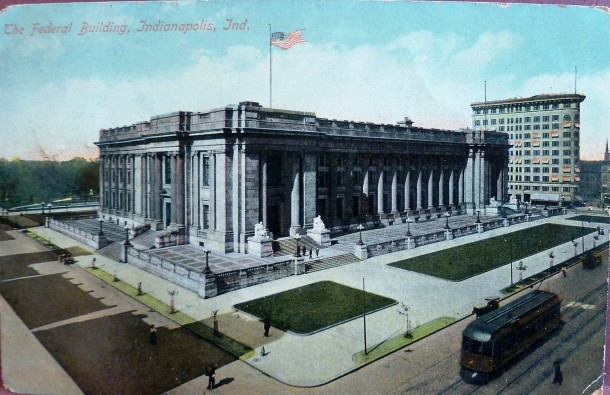 The Enterprise Hotel was another landmark felled by the growth of commerce during the first decade of the 20th century.  In 1906, George J. Marott demolished the hotel to build a modern department store. Although the Enterprise was less than 30 years old, it had amassed a unique history during its brief run as a site where several show troupes were stranded while awaiting money from their Eastern backers. Most notably, however, the Enterprise would be remembered as a favorite spot for suicides, where according to the Star, “in the quiet of its old fashioned rooms a number of people have forgotten the cares of the world through the ever ready carbolic acid bottle.”  Marott’s five-story building still stands today in the heart of the vibrant Mass Avenue Arts District.

In 1909, the home of Indiana’s Civil War governor Oliver P. Morton also fell to the wrecking ball after efforts to preserve the home as a museum were unsuccessful. A new office building called The Pennway was constructed on the southeast corner of Pennsylvania and New York streets, an area that only a few years earlier had been largely residential.

When the Pennway celebrated its centennial in 2009, the building was dilapidated and had been vacant for nearly a decade. In 2010, Summit Realty Group purchased the Pennway, and following a $3.3 million overhaul, the building received Double Gold LEED certification for sustainability.

Although the Pennway remains an office building, the entire block to the north on Pennsylvania Street will soon return to its residential roots after more than a century of commercial use. The Whitsett Group recently purchased The Indianapolis Star complex at 307 N. Pennsylvania and plans to convert the buildings into 500 apartments. Dubbed “Pulliam Square,” the mixed use development will be adjacent to the 1912 American Building, which is also being converted into 72 apartments. 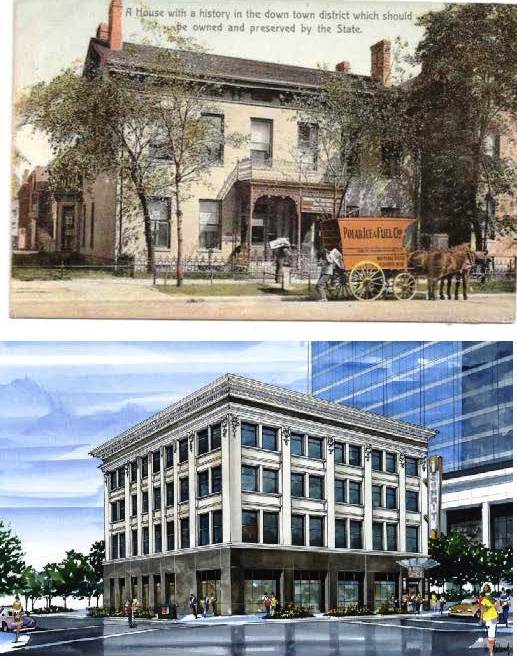 The relentless march of progress up Meridian Street during the 1910s was especially painful for local residents, many of whom felt deep personal connections with the fine old homes that once housed the city’s leading families.  The stately home of the late Indianapolis Journal publisher E. B. Martindale at 420 N. Meridian Street as the first of the grand dames to fall when it was demolished in May 1910 and replaced by a garage. The following week, the Kimball home at 726 N. Meridian was razed to make way for an automobile showroom.  In the ensuing years, the once grand houses that lined Meridian Street fell one by one like a row of dominoes. 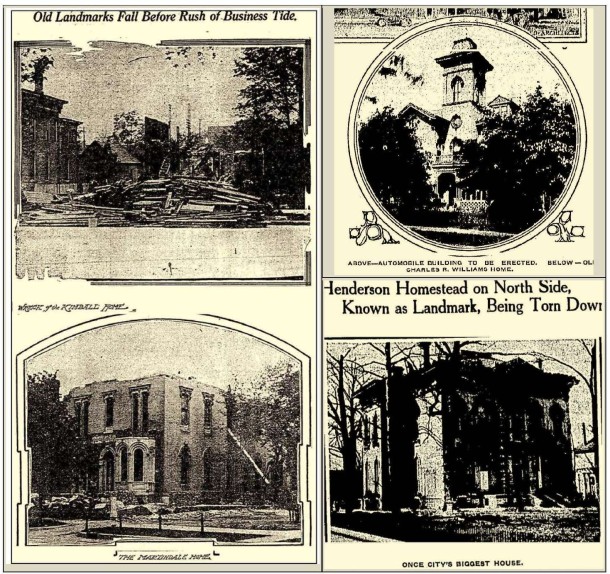 When Frederick Fahnley’s home at the southwest corner of New York and Vermont Streets was razed in 1921, the imposing limestone mansion was the sole survivor of a once-stately row of homes that faced University Park.  A few years earlier, it would have seemed improbable that commercial interests would encroach upon this quiet park-like setting. However, the area started turning when Gen. Lew Wallace demolished an old-fashioned homestead in the 400 block of north Meridian and built the now-landmark Blacherne apartments.

Fahnley’s Italian Renaissance mansion was completely surrounded by gasoline stations and commercial buildings when it was demolished to make way for construction of the Indianapolis Athletic Club. After 70 years of service as a private club, the 9-story building that replaced Fahnley’s home was recently converted back to residential use as condominiums. 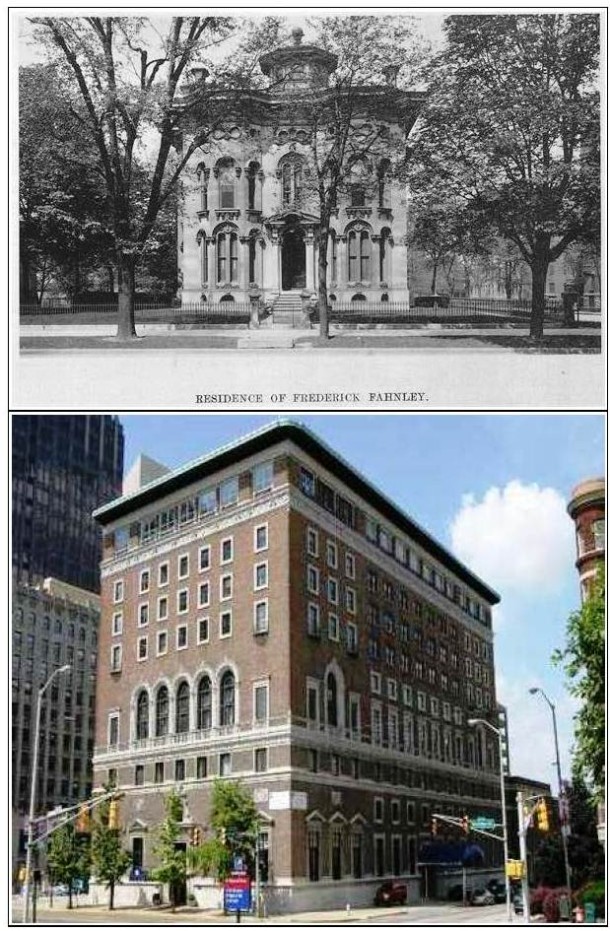 The year after Fahnley’s home was razed, dozens of other nearby homes, churches, and commercial buildings were slated for demolition by the Indiana War Memorial Commission.  Under the commission’s plans, only two historic structures would be retained following construction of the World War Memorial — the Second Presbyterian Church on the corner of Pennsylvania and Vermont, and the First Baptist Church on the opposite Meridian Street corner.

“Standing as a gateway from University Park into this memorial site, the churches on either corner in years to come will raise their spires proudly as the last reminder, on these two city squares, of the interesting past,” the Star reported in 1922.  However, when I snapped this photo of the World War Memorial from my office window late yesterday afternoon, the churches were nowhere to be found. 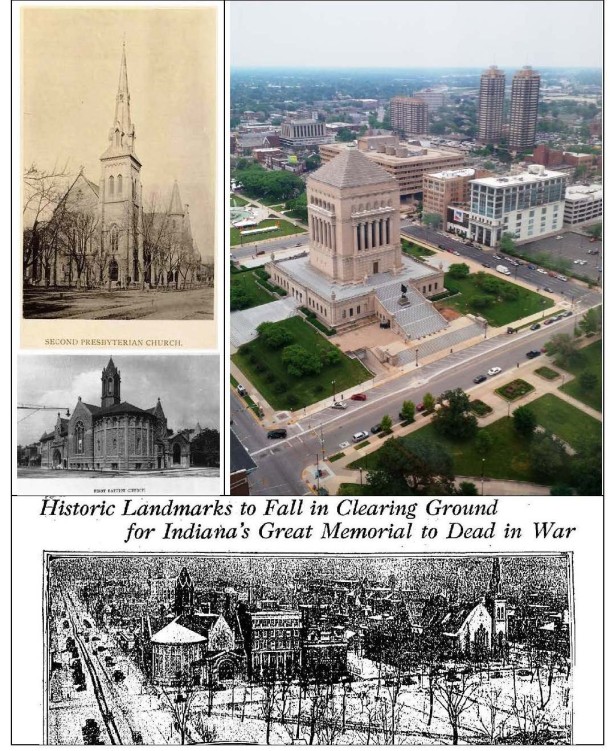 All of this brings to mind the transitory concept of “lost Indianapolis.” The places that we consider “lost” are different from the places our forebears viewed as lost, even if they’re located at exactly the same place. 100 years ago, Indianapolis residents mourned the demolition of pioneer and Civil War-era buildings to pave the way for the construction of the federal building, the World War memorial and the Indianapolis Athletic Club.  Imagine the outrage today if these landmarks were razed.

It’s impossible to know what Indianapolis will look like when its tricentennial rolls around in 2120. But as the cast of thousands sang in the final scene of the Centennial pageant on June 8, 1920 (to the tune of the Battle Hymn of the Republic):

“Our hundred years are but a breath in His vast Century,

And yet the wonder they have wrought enraptures us who see.

What tongue can tell or fancy paint thy splendors yet to be,