Before the advent of planes, trains and automobiles, the fastest route from point A to point B was usually by water.  So when a new state capital was selected in 1820, the fact that Congress had passed a law declaring the White River to be a navigable “public highway” was a critical selling point for the tiny pioneer settlement that would later become Indianapolis.

Sadly, city founders quickly discovered that it would take more than an Act of Congress to make the White River navigable to Indianapolis.  Sandbars, drifts and low-hanging branches made it virtually impossible for all but the smallest craft to travel any amount of distance on the White River.  In an effort to open a “public highway” to the new state capital, in 1825 the legislature commissioned Alexander Ralston to survey the river and determine whether Indianapolis could become a port in the growing steamboat trade.

Ralston came back with a good news-bad news report.  The good news was that a 450-mile stretch of the White River could be cleared of obstructions and rendered navigable for just $1,500 per year.  The bad news was that the window of navigability would be limited to three months out of every 12.

Not surprisingly, the steamboat trade remained wary of the hazards of the White River, so as an inducement, Governor Noah Noble offered a prize of $200 to the first steamboat captain who could reach Indianapolis with his cargo.  After two failed attempts by other steamboats, the “Robert Hanna” floated into Indianapolis from Cincinnati on April 11, 1831. 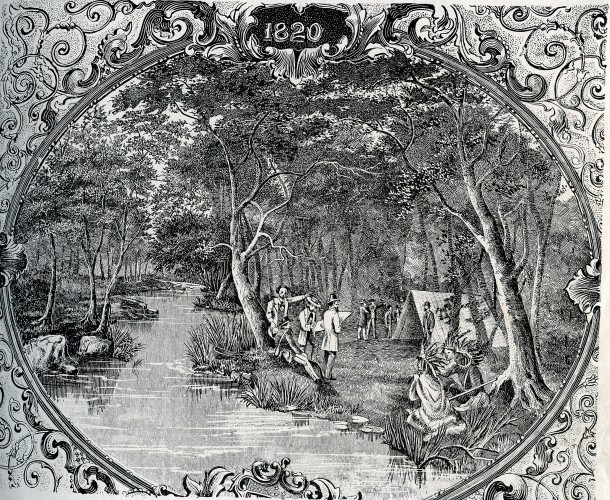 The stranded steamboat had been commissioned by General Robert Hanna to haul stone and timber to Indianapolis for the construction of the National Road. Following the failure of his namesake craft, the city would remain largely isolated from major trade centers until the first trains roared into town in 1849. But this was not the only time that Robert Hanna would be bested by a train. Nine years later, the General himself was felled by a locomotive as he walked down a railroad track in Indianapolis.

The arrival of a steamboat in Indianapolis was hailed with joy by the whole population.  A committee of the town’s leading citizens was promptly appointed to plan a suitable demonstration of the gratitude felt that day by local industries and farmers who would finally have a speedy means to take their goods to market.  A resolution was adopted that called the arrival of the Robert Hanna from Cincinnati a “proud triumph” and a “fair and unanswerable demonstration of the fact that our beautiful river is susceptible of safe navigation.” To officially inaugurate the city’s status as a seaport, a local artillery company paraded to the banks of the White River and fired a cannon salute.

The joy was short-lived. The following day, eager passengers boarded the Robert Hanna for an excursion up the White River. An overhanging branch knocked out the pilot house and one of the chimneys, dunking many of the passengers in the water.  The damaged boat started back up the river on May 13, 1831, but ran aground on Hog Island.  It was stranded there for the next six weeks.

Following this ignoble end, no more attempts were made to connect Indianapolis with the rest of the world via a seaport on the White River. Although Indianapolis would eventually become a thriving hub for railroad transportation,  a full century would pass before the city would hold another celebration to inaugurate a new port, this time in the air. 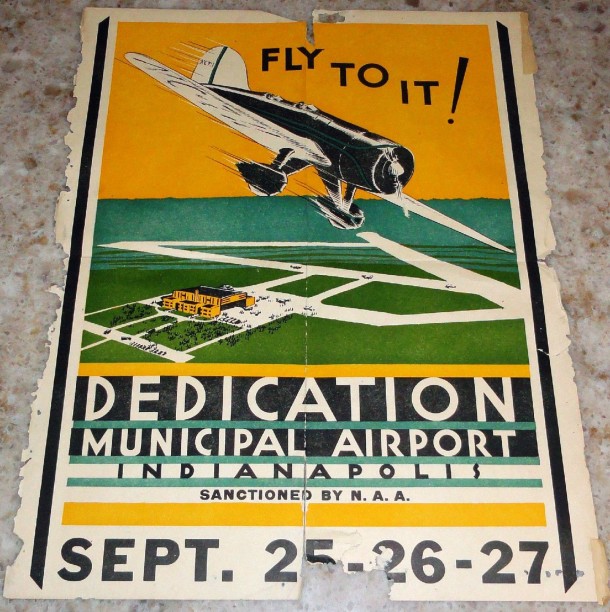 Despite its poor condition, this poster promoting the 1931 dedication of the Indianapolis Municipal Airport sold last summer on eBay for $223.

From September 25-27, 1931, the Indianapolis Chamber of Commerce staged a mammoth festival to dedicate the new Indianapolis Municipal Airport.  Hailed as the greatest aerial spectacle ever witnessed in Indiana, the event featured nearly 100 different commercial and military planes participating in air races, acrobatics, parachute jumps, stunt flying and “dead stick” contests, where the pilots landed their planes without power.  Thousands of people flocked to the air fields to witness the dawn of an new era in Indianapolis.

According to the Chamber, the new Indianapolis Municipal Airport would soon become the “Crossroads Airport of America.” 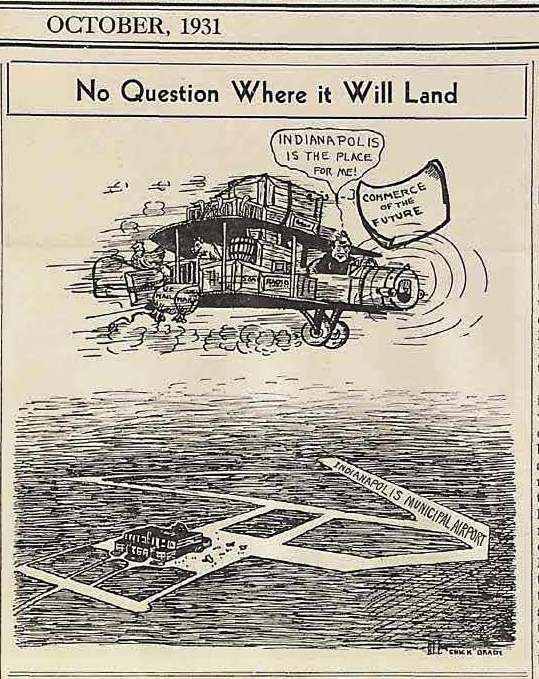 The dedication ceremonies were the culmination of more than a decade of work by local business leaders to capitalize on the fledging aviation industry.  Although central Indiana’s topography had proved to be inhospitable to navigation by water, its flat surface and central location made it the perfect site for a port for air travel, air mail and air commerce.  And city leaders needed to look no further than Speedway to find the perfect location for the first Indianapolis airport.

In May 1926, the Indianapolis Airport Corporation struck a preliminary deal with Speedway owners James Allison, Arthur Newby and Carl Fisher for the right to use the track infield as a landing field. The Chamber of Commerce started a drive to raise $20,000 from local businesses to build a commercial hangar and relocate Air National Guard equipment from Kokomo. Eli Lilly & Company and Real Silk Hosiery Mills were among the largest donors at $1000 each.  E.C. Atkins & Company and Kingan & Company both contributed $500 as well, and many other local industries pitched in $50 or $100 each.  The contributions were viewed as a necessary investment in both their companies’ and the city’s future.

Meanwhile, plans for an “auspicious dedication” of the new Speedway airport were underway.   The cornerstone for the new hangar would be lowered from a plane and as night fell, flares would be lit and low-flying military planes would drop sacks of flour to demonstrate wartime bombardment techniques. Calvin Coolidge and Edsel Ford were invited. But at the last minute, the plans for the new airport crashed and burned when the Speedway’s owners insisted on a contract that gave them the right to reclaim the infield from the Airport Corporation with only six months notice.

The guest badge for the airport dedication sold at auction in 2005 for $40. The small souvenir plane was offered on eBay last summer at the same time as the poster, but went unsold.

Real Silk president J.A. Goodman, who also served as president of the Airport Corporation, explained that the corporation had no choice but to decline the Speedway’s generous offer because a permanent site was needed for the airport.  However, the capital campaign had failed to raise sufficient funds to purchase the required acreage, so a large tract of land was leased in Mars Hill.  The airfield opened in 1926, and the hangars and terminal were built the following year.  By 1928, it became apparent that a bigger municipal airport would be needed, so Indianapolis began shopping around for a new location.  Subsequently, the Mars Hill airport would be transferred to the state for use by the Indiana Air National Guard, and would be renamed Stout Field.

Although options were initially held on more than 40 different sites scattered throughout Marion County, the Airport Corporation eventually settled on 1000 acres lying approximately seven miles southwest of Monument Circle.  More than 100 of these acres were adjacent to the Pennsylvania Railroad and were set aside for the development of industries that would use both air and rail transportation to get their goods to market.  The Airport Corporation praised the new site as “sufficiently comprehensive and flexible to accommodate every immediate and future need.”

By the time the new Indianapolis Municipal Airport was officially dedicated in September 1931, it had become one of only nine U.S. airports to attain an A-1-A accreditation rating, which meant the airport could handle the largest transport planes of the time.  The rating also helped earn Indianapolis a coveted slot on one of the nation’s first transcontinental Air Mail routes. 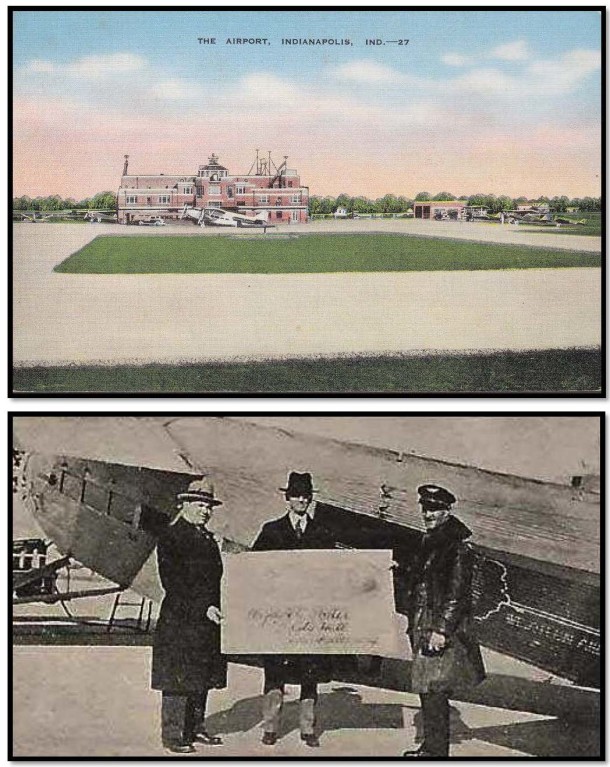 In the days before email and the now-obsolete fax machine, air mail was the only means that businesses could use to quickly transmit documents across country.  Although the U.S. government began experimenting with this new method of postal delivery as early as 1911, hearings on the first transcontinental route did not get underway until 1929.  Indiana was initially deemed a flyover state, but local business leaders pushed to make the under-construction Municipal Airport a stop on the 20th Century’s version of the Pony Express.

These efforts succeeded, and in March 1931 Indianapolis Chamber president Louis J. Borinstein sent a gigantic postcard bearing greetings from Indianapolis to the mayor of Los Angeles to commemorate the first coast-to-coast passenger and air mail service from the new municipal airport.  With the advent of air mail, correspondence could arrive in New York from Indianapolis in a mere six hours and in California in 24 hours. 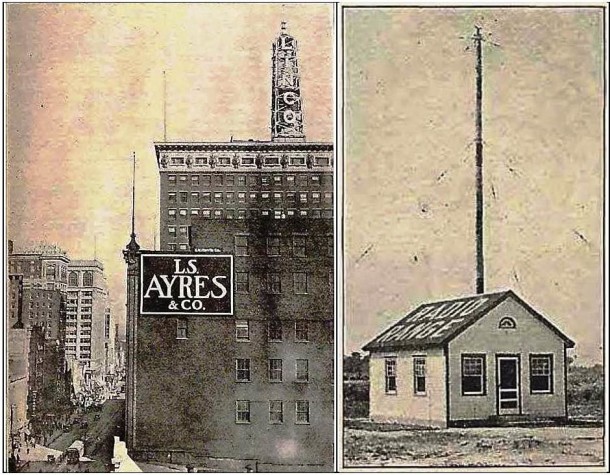 Source: The Bulletin of the Indianapolis Chamber of Commerce

Although in 1930 the current speed of flight would have permitted an air mail letter or passenger to make the journey from Indianapolis to Los Angeles in less time than 24 hours, cross-country night flying was prohibited until the U.S. Department of Commerce could complete a system of lighting beacons. In furtherance of this effort, the department’s Bureau of Lighthouses erected a radio range at the new airport, along with a 2.8 million candlepower beacon that rotated high atop the terminal’s glass tower.

The private sector quickly saw the advertising opportunities presented by the attention-getting lights, and in downtown Indianapolis, Lincoln Oil Refining Company built an enormous beacon on top of the Merchants Bank Building. With 1,790 feet of neon tubing flashing the Linco name in alternating shades of red, white and blue, it was the largest neon beacon in the country. 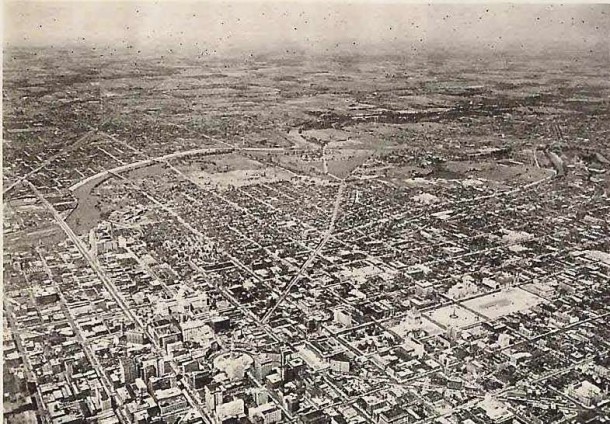 The Indianapolis Municipal Airport was initially used by only two airlines for passenger service: Transcontinental & Western Air (predecessor to TWA) and the Embry-Riddle division of American Airways, Inc. (predecessor to American Airlines).  These airlines made one flight to and from Indianapolis each day.  Passenger travel was uncomfortable in 1931, as the planes flew too low to avoid turbulence and often passengers shared their space with crates of mail.  But over the next few years more comfortable planes were developed, and by mid-century air travel would outpace travel by rail.

Nine years before the airport was completed, The Indianapolis News predicted that there would be a day, “considerably in the future,” when “the sight of an airplane passing overhead would attract no more attention than the sight of a flivver on a dusty road,” and “passengers will think no more of stepping into a passenger-carrying airplane than they do of stepping aboard an interurban car.”  With the dedication of the new Municipal Airport in September 1931, the future had finally arrived in Indianapolis.