*Libby is on a brief hiatus.  Please enjoy this post deep from deep in the HI archives.

In 2012, a bill that would have cleared the way for the teaching of “creation science” in our public schools passed the Indiana Senate with bipartisan support.  But enough about that.  Because this is a blog about Indianapolis history, I’ll leave it to the Legislature to debate the origin of life.  Instead, I’m announcing today that through rigorous scientific research and a half-hour in the Supreme Court Library, I have been able to discover the origin of Indianapolis.   I challenge any legislator to dispute THIS  evidence.

That’s right – you read it here first.  On the 6th day of January, 1821, the Legislature created Indianapolis.

The creation of a capital city was not the only issue on lawmakers’ minds on January 6, 1821. Immediately after the House took final action on “An Act Appointing Commissioners to Lay Off a Town on a Site Selected for the Permanent Seat of Government,” it soundly defeated a proposal titled “A Bill to Prevent Injury by Dogs.”

Even though the General Assembly established Indianapolis as the state capital in 1821, another four years would elapse before the Legislature finally arrived in town.  Southern Indiana lawmakers were loathe to relinquish their power base and were reluctant to travel several days on horseback to a backwoods frontier town that lacked the amenities of Corydon.  Another reason for this delay was the simple fact that Indianapolis lacked representation at the then-capital, Corydon. This was rectified in 1823 when James Gregory of Shelby County and James Paxton of Marion County were elected to the Senate and House, respectively, after what historian W.R. Holloway described as a spirited campaign of “child-kissing, dinner-eating, wife-flattering electioneering.”

The duo traveled to Corydon in November for the start of the session, and by late January had managed to convince their fellow lawmakers that it was finally time for Indiana government to move to its permanent home.  Their cause was aided by legislators’ growing discontent with the price-gouging tactics of Corydon innkeepers.

The citizens of Indianapolis were jubilant in victory, and feted Gregory and Paxton with a banquet upon their return to Indianapolis.  The city was literally drunk with the promise of prosperity that would follow.  Some years later historian Berry Sulgrove wrote that the settlers’ dreams were eventually fulfilled, “but not until all who were old enough to take part in the festivities were in their graves.” 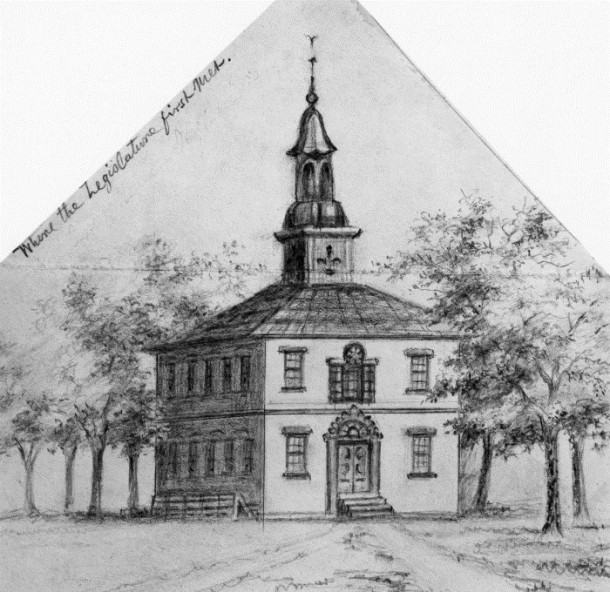 State Treasurer Samuel Merrill officially moved the capital from Corydon to Indianapolis in November 1824.  Meanwhile, Indianapolis readied for the arrival of the “big bugs,” as legislators were commonly called in those days.

The Legislature had appropriated $8,000 for the construction of a courthouse that would serve the General Assembly until a state capitol was built. Thomas Carter opened a tavern on Washington Street across from the courthouse, while James Blake and Samuel Henderson built Washington Hall.  And in an effort to raise the level of discourse in the frontier town, the leading men of Indianapolis established a mock legislature that for the next 12 years would debate many of the same issues confronting the real legislature, with the information and arguments from the faux body’s debates often determining the outcome of the real thing.

The first session of the General Assembly to be held in Indianapolis was gaveled in on the morning of January 10, 1825.  Although “gaveled in” might not be the correct term, because it appears that the new courthouse lacked a table for the Speaker of the House. The House Journal reflects that shortly after the session was opened with “a solemn prayer and thanksgiving to Almighty God,” the House Doorkeeper was dispatched to procure for the use of the Speaker “a common sized plain table, with a drawer, and a lock and key to the same.” Whether the Speaker was able to use his new table for the entire legislative session, however, remains unclear.

One of the first laws of lawmaking is that every law is passed for a reason. I was reminded of this again last week when I questioned why someone had filed a bill to define the term “wild hog.” I was soon informed by those more knowledgeable that wild, feral hogs are quite a problem in some parts of the state. So my curiousity was naturally aroused when I saw that one of the first laws passed in Indianapolis dealt with the subject of state furnishings.

Early in the 1825 session, the Legislature adopted a law requiring the Secretary of State to procure a branding iron to brand all tables, desks, chairs, candlestands and anything else that might be moveable with the initials “PSI” (Property of the State of Indiana”).  Given the urgency of this legislation, I would not be surprised if the Speaker had arrived for session one morning only to find out that his table had walked off during the night. 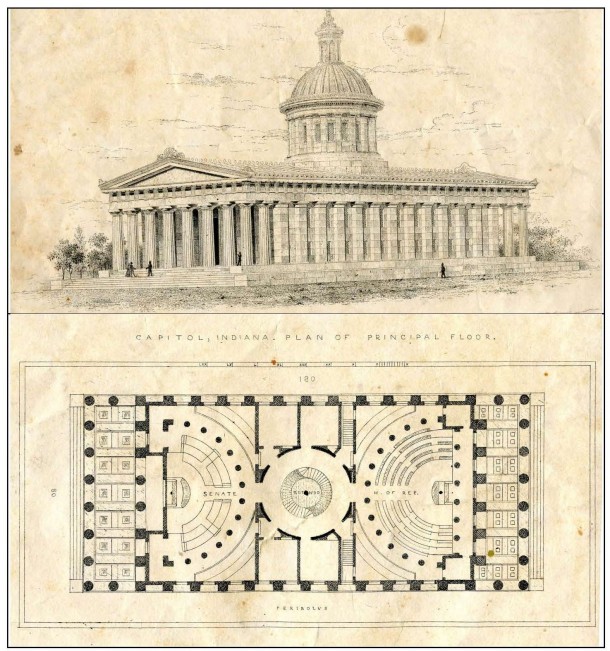 The legislators’ living conditions during that first winter were rough. Although Indianapolis had four years to prepare for the onslaught of activity that accompanies a legislative session, the town was ill-equipped to handle the nearly doubling of its population brought about by the arrival of more than 100 men — some accompanied by family members — along with curious onlookers and various hangers-on with axes to grind. To make matters worse, Carter’s Tavern burned down in February, forcing many lawmakers to flee and seek refuge in primitive cabins where their colleagues already were sleeping three to a bed.

Although the addition of several new taverns made lodging more comfortable the following year, the courthouse quickly proved to be too cramped to accommodate the needs of the Legislature .  Hearings were regularly held in private homes, as the courthouse lacked space for the work of the various legislative committees.  Less than six  years after its first session in Indianapolis, the Legislature voted to build a new Statehouse. 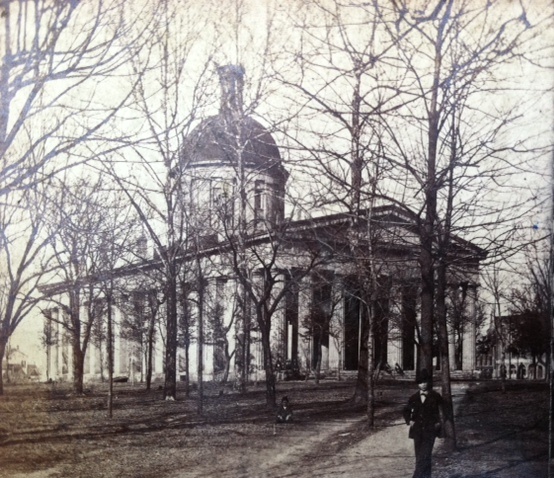 While the completion of the new Statehouse in 1835 brought a certain gravitas to Indianapolis, overall the city’s selection as the state capital failed to fuel any meaningful economic development.  As a practical matter, it made no sense for private businesses to make a substantial investment in infrastructure to serve a General Assembly that was only in town for three months each year.  In fact, during their early years in Indianapolis, state lawmakers devoted considerable effort to the passage of relief measures for property owners who had unwisely bet on the come and paid inflated prices for the lots in downtown Indianapolis.

According to historian W.R. Holloway, the selection of Indianapolis as the state capital was akin to a “fairy’s bad gift,” which would only do one thing while blocking the recipient from doing anything else.  It was not until the first train roared into the station in 1847 that the pioneer era ended and Indianapolis really began to grow as the center of commerce. 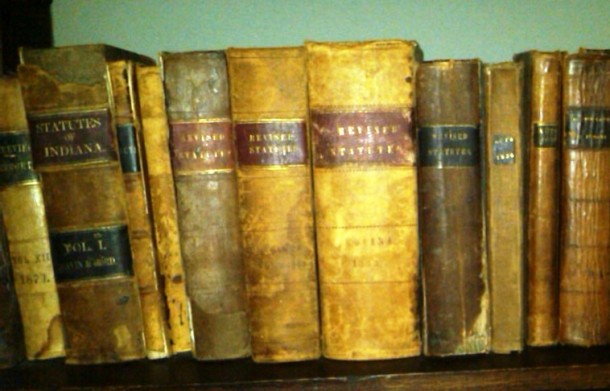 I have always been fascinated by pioneer-era legislation, perhaps for the same reason I enjoy watching a certain TV show about survivors struggling to re-establish civilization after a zombie apocalypse. In both situations, a group of people are handed a blank slate and given the opportunity to create a new system of laws and government.  The choices that they make and the decisions that they avoid making could determine the course of society for decades, even centuries to come.

Some years ago, I started assembling a collection of statute books from the early sessions of the Indiana General Assembly.  So far, 1828 is the earliest year that I have been able to find at a reasonable price. These books are beautiful to look at but even more interesting to read because they tell the back story of the Indiana that we know today.  Counties were established and named in those years – and sometimes renamed, as in the case of my home county, Howard, which was originally established as Richardville.  Complicated laws on banking and taxation were passed in the same years that state funds were appropriated for the purchase of wolf scalps.  And law after law was passed during the pioneer era that continues to benefit the city of Indianapolis and the people who live here. 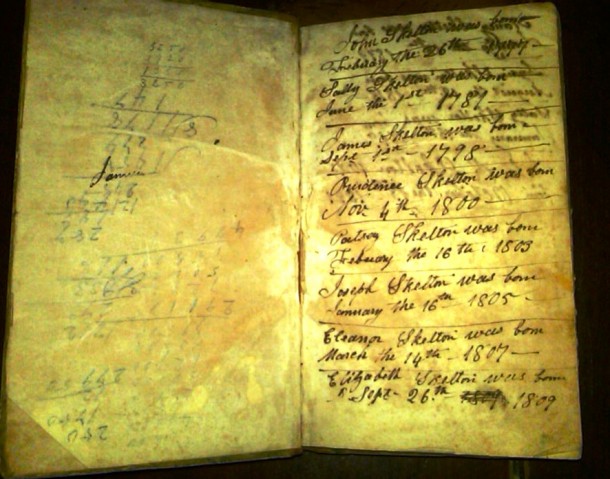 It’s not uncommon to find that a previous owner of an old book used the flyleaf for purposes completely unrelated to the book. Above, someone used this original copy of the 1832 Laws of the State of Indiana to work through a complicated math problem and also to trace the history of the Skelton family back to 1777.

Almost 192 years to the day that it established Indianapolis as the state capital, the Indiana General Assembly returned to the city this month for the start of another legislative session.  Their horses have long since been replaced with SUVs, but the basic purpose of the Legislature remains unchanged: to enact the laws by which the state of Indiana is governed.

I hope that in another 200 years some future history buff will be reading about the 2014 legislative session and will be amazed to learn that 2014 was THE year that legislation was passed that forever changed the course of Indianapolis history. Perhaps the city was saved from annihilation by feral hogs thanks to the passage of the wild hog bill. Or perhaps 2014 will be the year that state lawmakers finally give Indianapolis residents the right to vote on whether they want a world-class transit system. Only time will tell.  I just hope that when the time comes, the bills and acts and statute books that I can read on paper today haven’t vanished into the cloud.