Indianapolis Collected: The Devil in the Circle City 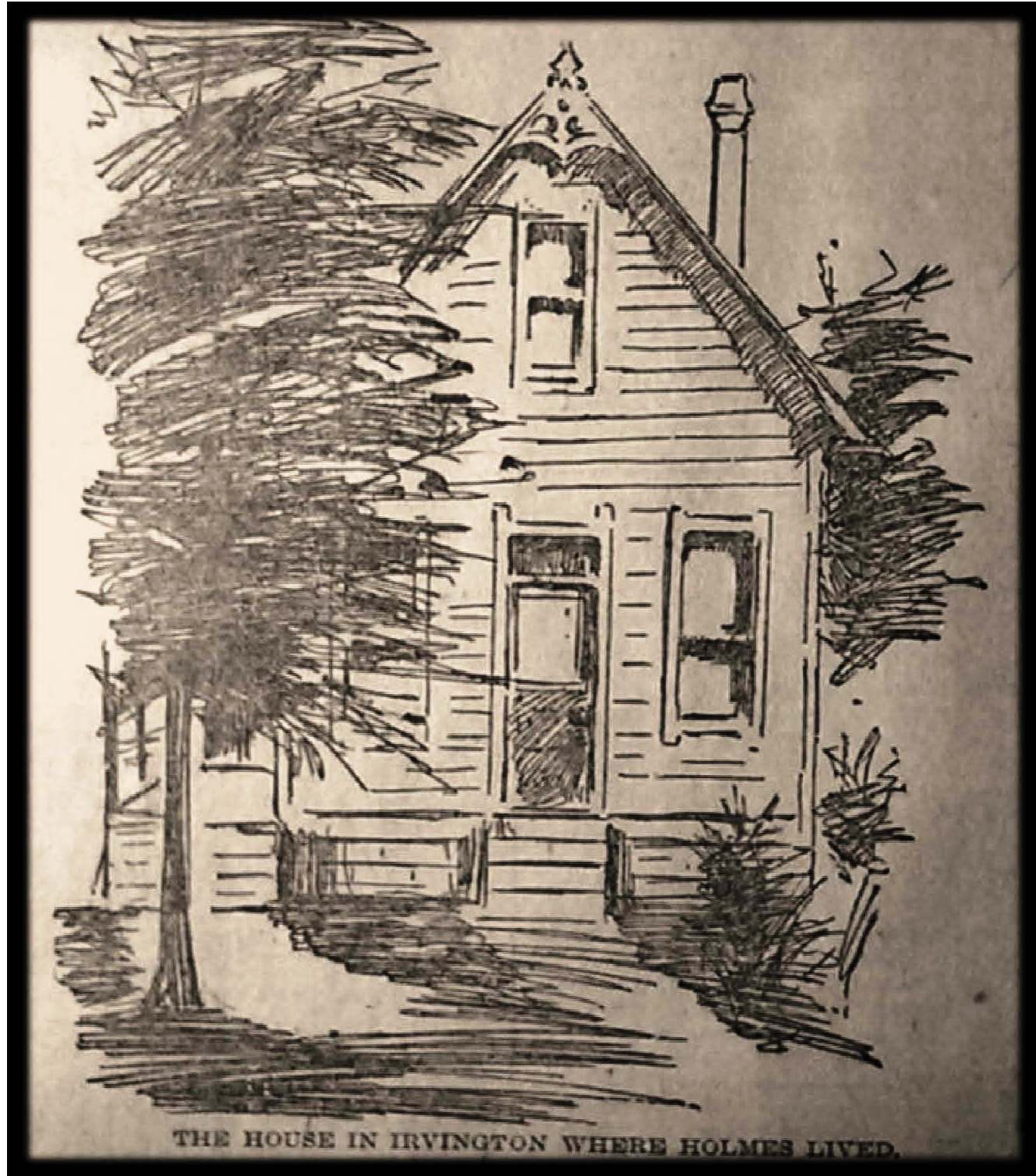 By the time H. H. Holmes checked into Room 76 of the English Hotel in September 1894, he already had seduced and murdered at least two dozen young women in his infamous “Murder Castle” just blocks from the Chicago World’s Fair. He’d also run numerous insurance scams, operated several fraudulent businesses, and simultaneously juggled three different wives – all while leaving both police and his wives in the dark about his nefarious deeds. And if he hadn’t been so greedy for a $10,000 insurance check deposited in an Indianapolis bank, Holmes just might have gotten away with it all.

H. H. Holmes’ gruesome connection to the Indianapolis area had become a forgotten chapter in the city’s history until Erik Larson published his bestselling book in 2004, “The Devil in the White City.” But there was a time when Holmes was a household name in Indianapolis. During the sweltering summer of 1895, the city was spellbound as the sordid tale of Holmes’ crimes unfolded each day on the front pages of The Indianapolis News.

I stumbled upon The Indianapolis News’ lurid coverage of Holmes a few years ago, when I purchased a bound volume of the News that had been deaccessioned from the Indiana State Library. I thought it would be fun to read the local news from the year that my house was built, so I made an effort to read one paper each day, starting on July 1 with the July 1, 1895 edition. My enthusiasm quickly waned, as I discovered that 100 year-old newsprint crumbled to the touch and was loaded with dust mites. By mid-July, I had all but abandoned the project. But then I saw the following headline: 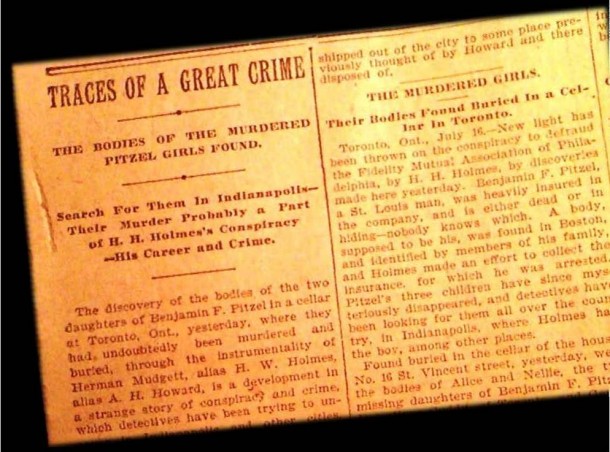 Holmes’ tangled web of treachery began unraveling on July 15, 1895, when Philadelphia detective Frank Geyer found the naked bodies of Alice Pitzel, age 14, and Nellie Pitzel, age 13, buried in a cellar in Toronto. Earlier that year, Holmes — also known as Herman Mudgett or A. H. Howard – had been jailed in Philadelphia on suspected insurance fraud. At the time, police believed that Holmes and the murdered girls’ father, Benjamin Pitzel, had obtained a medical school cadaver and used it to stage Pitzel’s “death” in an explosion so they could claim a $10,000 life insurance policy. Police later learned that the charred body was actually Pitzel’s.

Following the staged explosion on September 4, 1894, Holmes took custody of the Pitzel girls and their younger brother, Howard, by telling their mother that he planned to enroll them in a good school in Indianapolis. Between September 23 and October 8, the children were spotted with Holmes at various local hotels, including the English Hotel, the Stubbins Hotel, the Circle House, and the Circle Park Hotel. The boy was never seen again, and shortly thereafter, the two girls also went missing. Holmes claimed that the children had been taken abroad to study by one of his former paramours, Miss Minnie Williams.

According to Holmes, Williams needed to leave the country because she had killed her sister in a fit of rage after seeing her in intimate circumstances with Holmes. Something didn’t quite add up with Holmes’ story, however, and Detective Geyer soon became convinced that the Pitzel children had been murdered by Holmes in an effort to cover up the insurance fraud. His worst suspicions were confirmed when he found the girls’ bodies in Toronto. 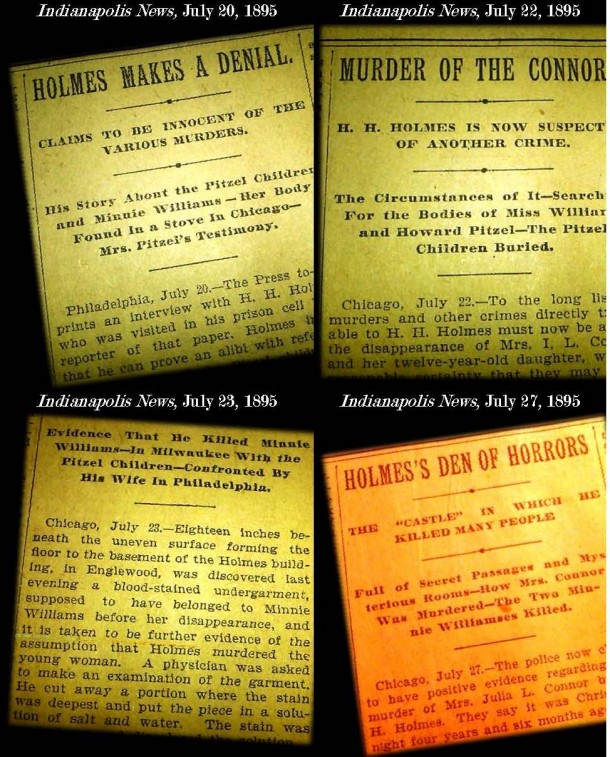 On July 19 – just four days after the bodies of Alice and Nellie Pitzel were found in Toronto — the charred remains of their supposed guardian, Minnie Williams, were discovered in the furnace of Holmes’ Chicago-area house. The following Monday, police found a blood-stained rope tied in a hangman’s noose beneath a quantity of rubbish. By then, the noose was also beginning to tighten on Holmes.

In addition to suspecting Holmes of killing the four members of the Pitzel family and both Williams sisters, authorities now believed that Holmes also murdered Mrs. Julia Connor and her daughter, Pearl, and Emeline Cigrand and her husband. Emeline was a blonde beauty from Lafayette, Indiana, who had worked as Holmes’ confidential secretary in his one legitimate business, the A.B.C. Copying Company. In December 1892, she told her family that she was getting married to an older, wealthy man named Robert Phelps, who had promised her two years abroad. The couple was never heard from again. After the news of Holmes’ horrible deeds surfaced, Emeline’s family contacted Chicago authorities. A close friend of Emeline’s then told police that she had seen a “very nervous” Holmes carry a large trunk downstairs on the same day that Emeline disappeared.

The Conner family lived in the flat above Holmes’ drug and jewelry store in Englewood, where Ben Conner worked. At some point, Connor learned that the relations between Holmes and his wife “were not of the nature consistent with the laws of society.” Before long, both Julia Conner and 12-year-old Pearl Conner had disappeared.

On Saturday, July 27, the news broke of Holmes’ house of horrors. Police told reporters that the second floor of the Holmes’ castle, with its labyrinth of narrow passageways and dozens of oddly shaped rooms, seemed designed for “dark” purposes. Foul odors permeated the air, and traces of human blood, bone and hair were found throughout the basement. Although term “serial killer” was not yet part of the American lexicon, police were beginning to realize that Holmes had built a murder factory just a few blocks from the site of Chicago World’s Fair. 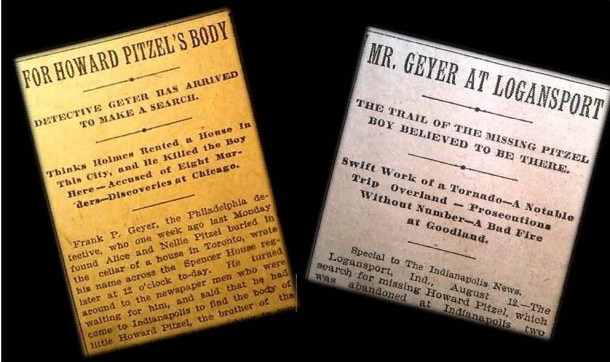 Meanwhile in Indianapolis, Detective Frank Geyer was on the trail of Holmes and his youngest victim, Howard Pitzel. Geyer believed that Holmes had followed the same pattern in Indianapolis that he did in every other city where he had committed crimes. Holmes would rent a nice house in the suburbs, pay a month’s rent in advance but stay for only a few days. Geyer was sure that if he could find the house that Holmes rented, he would find the child’s body.

Working with Indianapolis Detective David Richards, Geyer began by contacting local real estate agents and asking if they rented a house to a man matching Holmes’ description between the 1st and 15th of October. He also called on the newspapers for their assistance to ask their readers if they had rented a house to Holmes under these circumstances. Geyer and Richards followed nearly 900 leads over the next month, without any success.

On August 26, Geyer was sitting in the lobby of the Spencer House feeling a little down when an insurance investigator suggested he expand the search to some of the little towns outside the city. Geyer started for Irvington at 9 the next morning, and within an hour had found a real estate agent who had rented a house to a man who looked like Holmes. He directed the detectives to the house, where Howard Pitzel’s trunk was found under the porch. 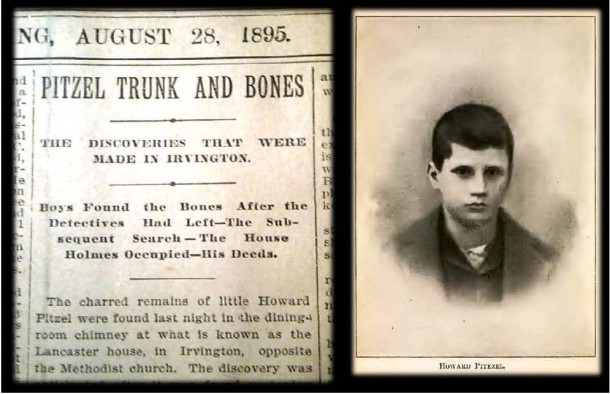 Because the cellar floor was undisturbed, the detectives surmised that Howard’s remain were likely buried outside. Searching the barn, the detectives found a large stove that appeared to be stained with blood. They started digging behind the barn, and soon a crowd of several hundred people gathered, hindering the investigation. Since it was almost nightfall, Geyer decided to call off the search for the day and resume the next morning.

After the detectives left the house on August 27, three small boys — Walter Jenney, Oscar Kettenbach, and George L. Brown—decided to play detective. They looked under the porch, in the attic and around the backyard for a few minutes, and then headed down to the cellar where they saw a brick flue.

“Let’s look in here,” Jenney said, as he rammed his hand into one of the flue’s openings. He pulled out a handful of chimney debris and saw charred pieces of bone. The boys ran to get Dr. Barnhill, the owner of the house, who confirmed their suspicions. Barnhill took the boys’ gruesome discovery to the offices of The Indianapolis News, where reporters quickly summoned Geyer. The detectives then headed back to the Irvington house, where further investigation of the chimney yielded child-size teeth and other conclusive proof that Howard Pitzel had finally been found.

Elsewhere in Irvington that evening, H. N. Goe was having a festive lawn party, replete with Chinese lanterns. After the newsboys reached Goe’s house with the special edition featuring the discovery of Howard’s remains, the guests grabbed lanterns and marched over to the scene of the crime. Although the detectives had gone home for the evening, there were many particles of bone remaining in the cellar. Some of the young men carried them away as souvenirs. 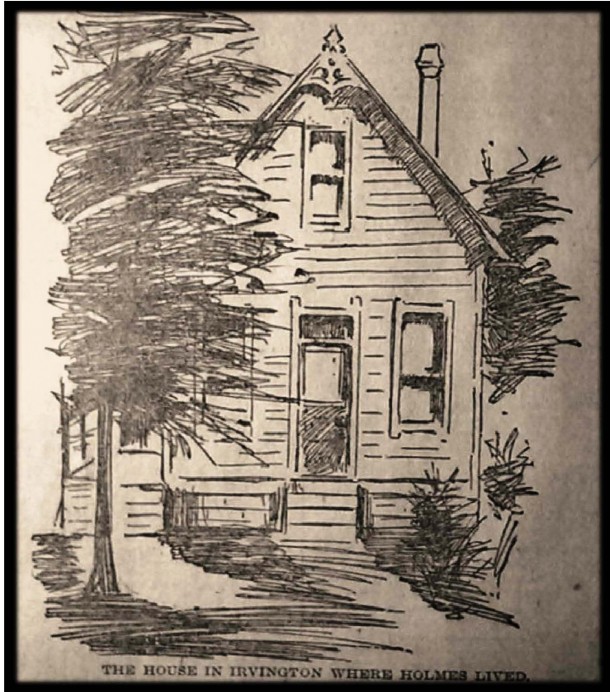 H. H. Holmes was convicted of four counts of murder in the first degree. After his conviction, he confessed to 27 murders, although based on the number of women who went missing during the 1893 World’s Fair, some believe that the body count could be as high as 200. He was executed by hanging on May 7, 1896.

In the years following Holmes’ execution, stories surfaced of a Holmes’ curse. Shortly after Holmes’ body was buried, one of the main trial witnesses suddenly dropped dead from blood poisoning. The trial judge and coroner were soon stricken with deadly illnesses, and the prison superintendent committed suicide. A priest who had prayed with Holmes before his execution was beaten to death, and the jury foreman was electrocuted in a strange accident involving electrical wires above his house.

When another member of the jury committed suicide in March 1912, The Indianapolis News contacted Detective Richards for his view of the so-called Holmes’ curse. Richards had since retired from the Indianapolis Police Department but was still well-known in town for the role he played in solving the murder of little Howard Pitzel.

“I have to laugh at that story every time I hear it,” Richards told the News in 1912. Ten years later, Richards died in a local hospital after doctors amputated his foot due to freak complications from a bullet wound he had suffered 25 years earlier.