“In my opinion the way to beautify Indianapolis is to make its people happier,” Mrs. Albert Metzger told The Indianapolis Star in 1911 when asked for her ideas on city beautification.

If you lived in Indianapolis at the time and didn’t know Frances Metzger, you might have read these words and dismissed her as a clueless socialite.  After all, her husband was a prominent banker who had built up considerable wealth through real estate investments. And the name “Mrs. Albert Metzger” was a fixture on the society pages as the Star chronicled her trips abroad, her summers in Michigan, and her beautiful home at 1508 Broadway Street.

But Frances’ name was mentioned just as frequently in connection with her tireless charity work on behalf of poor immigrant families. A member of the board of the Free Kindergarten Society and a long-time director of the Ladies Aid Society, Frances was not afraid to venture into the poorest neighborhoods of Indianapolis to provide both comfort and material assistance to those with the greatest need.

Still, had Frances been alive in 1975, even the fearless German matron might have been hesitant to step into the urine-soaked, bullet-riddled entryway of the once-grand house where she and Albert had raised their four children. 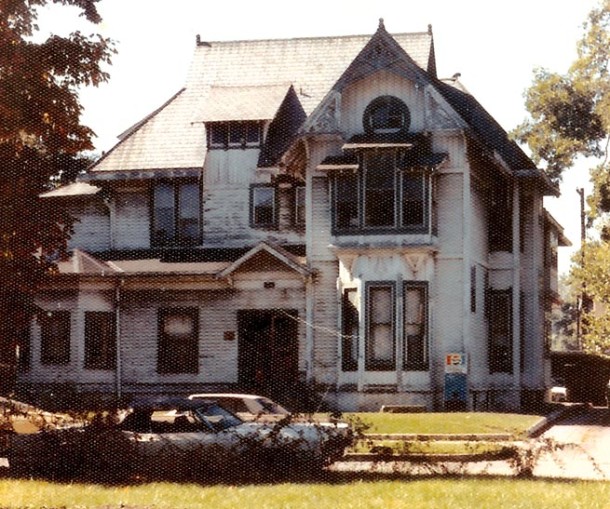 At the end of the 19th century, the area from 10th to 16th Street along Delaware, Broadway and Park Avenue was home to some of the city’s wealthiest and most prominent businessmen, merchants and politicians. Their majestic Victorian homes featured 14-foot ceilings, walnut woodwork, polished parquet floors and meticulously coiffured grounds.  The Metzgers moved to this neighborhood in 1900 and lived in their home at 1508 Broadway for the next 20 years. 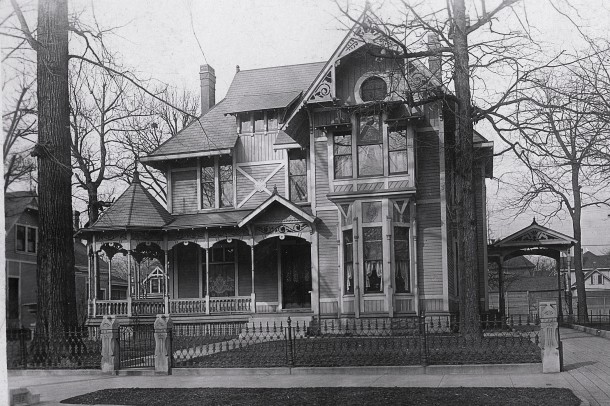 But by 1920, the area was starting to change.  Two apartment buildings had gone up in the six-block stretch of Broadway from 10th to 16th Street, and a handful of homes had been converted to apartments and boarding houses in response to a housing shortage during WWI.  Industry was also booming in the post-war years, and as a result the once-gracious homes near downtown were rendered gray and dingy from thick, black coal smoke.  As automobile travel improved, families fled to the “countryside” north of Fall Creek to escape the grime of the city.

Booth Tarkington lamented these changes in his 1918 Pulitzer Prize-winning novel, “The Magnificent Ambersons.”  Tarkington grew up in the area known today as the Old Northside historic district, in a large brick home at 1100 Pennsylvania Street.  He returned to the home after his parents died and was living there when he penned the following lines which described George Amberson’s Sunday morning walks through a bustling city that no longer resembled the quiet place where he spent his childhood.

“He explored the new city, and found it hideous…..Everything was damply streaked with the soot: the walls of the houses, inside and out, the gray curtains at the windows, the windows themselves, the dirty cement and unswept asphalt underfoot, the very sky overhead.”

In 1921, Albert Metzger and his family moved to a newly built home at 3120 N. Meridian.  Booth Tarkington moved north a few years later. 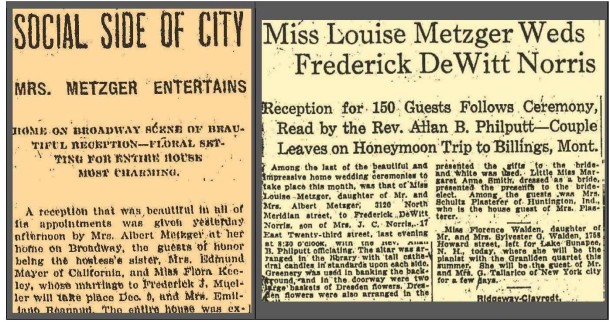 In 1908, the Metzger’s house on Broadway was the scene of a “beautiful reception” for Frances’ soon-to-be-married sister. But by 1922, the party had moved to the Metzger’s new home at 3120 North Meridian, where Albert and Frances hosted 150 guests for their daughter’s wedding.

Shortly after the Metzgers moved to North Meridian, the Broadway house was converted into four apartments.  By 1928, the once-spacious Metzger home had been carved up into eight small apartments.  Other homes on the street were also modified to accomodate renters, including our house, which was built as a single family home in 1894 but turned into a duplex two decades later. In 1929, The Indianapolis Star wrote that while the area then known as College Corner had retained its characteristic quiet for many years,  the neighborhood was now beginning to change.

The pace of change accelerated after WWII, as returning veterans and their young families moved to new homes in the suburbs.  By 1960, 15 of the Victorian-era homes in the 1500 block of Broadway had been chopped up into apartments, with some of the larger houses holding eight or nine units. Most were owned by absentee landlords who put little if any effort into maintenance. Fires had become so common in the Old Northside that in the late 1960s, the city launched an aggressive effort to condemn homes under the Unsafe Building Act.

Between 1960 and 1980, nearly 50 houses in the six-block area of Broadway from 10th to 16th Street were demolished, including the entire 1100 block, which was buried under the interstate.  The formerly tree-lined 1500 block where the Metzgers raised their family in the early 1900s was beginning to resemble inner-city Detroit.

By the time historic preservation efforts were launched in the mid-1970s, two-thirds of homes on the Metzger’s block already had been torn down by the city.  All that remained was a handful of decrepit houses scattered among weed-choked stretches of vacant lots. 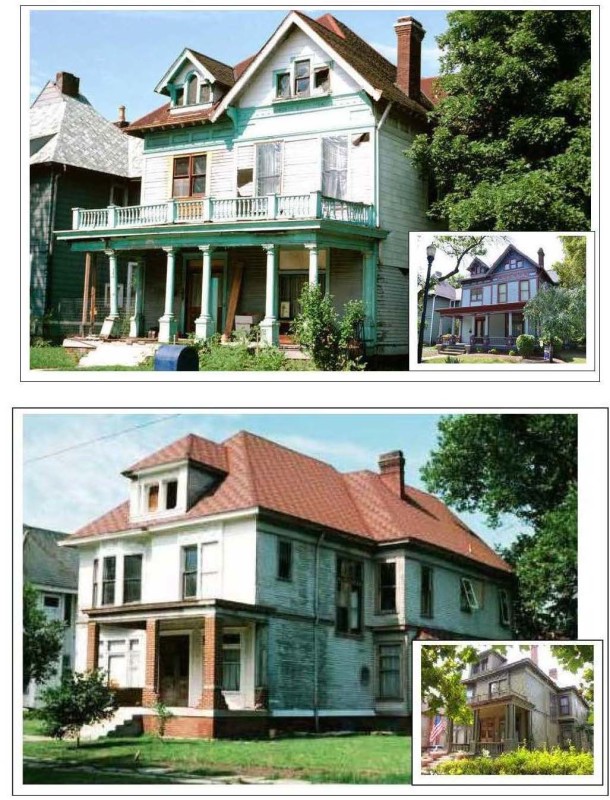 Rick and Cyndi Patton stumbled upon the neighborhood by accident one afternoon in 1975 when they were looking for an antique shop that was advertised on 13th Street. Finding the shop had closed, they saw a sign for the Morris-Butler house and decided to take a tour.  They were immediately intriqued by this newly restored Victorian gem standing in the midst of urban decay.

By that time, a handful of young couples had moved into the area, restoring old houses along Delaware and Alabama Streets while starting their families.  Cyndi learned of an invitation-only home tour that was scheduled in an effort to introduce other preservation enthusiasts to the neighborhood.  She wrangled an invitation, where their soon-to-be neighbors launched a full-scale effort to convince the Pattons to buy one of the vacant houses on Alabama Street.  But a man named John Buckley who was restoring an Italianate home on Broadway Street convinced them that they needed to look at the rambling old house across the street. 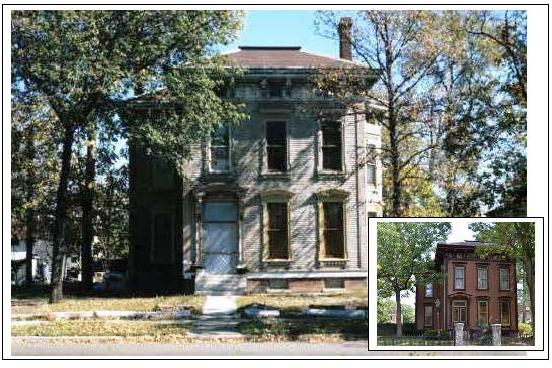 In 1975, John Buckley was in the process of restoring this Italianate home at 1531 Broadway. The house had been built 100 years earlier by Samuel Merrill, Jr., whose father led the small wagon train that moved the state capitol from Corydon to Indianapolis in 1824.

It would be an understatement to say that 1508 Broadway lacked curb appeal when the Pattons first saw the house in 1975.  Almost 60 people were crammed into eight squalid apartments.  Squatters were living in another two basement apartments that the Board of Health had condemned for sanitary reasons.  There were bullet-holes in the parquet floor,  a Cadillac repair shop in the carriage house and a Pepsi machine on the front porch.  And some of the young boys who lived in the house found great entertainment by standing on the front staircase and urinating on the radiators below.

Still, the Pattons looked beyond the decay and saw the beauty of the once-grand house.  After two more visits to 1508 Broadway, they become first-time homeowners.   Then the real work started.  For the next few months, they worked at the house on evenings and weekends, filling dumpster after dumpster with the 10 bathtubs, 10 toilets and 10 kitchens that had been installed in a house originally built as a single-family home.  In May 1976 — when the house was celebrating its 100th birthday – the Pattons finally moved in. 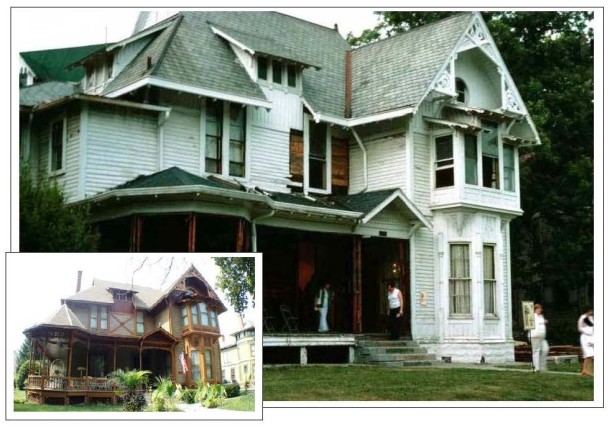 After about a year, the Pattons had completed enough work on the three downstairs parlors to open their house for the neighborhood’s home tour. It would be another 10 years, however, before they could afford to paint the house.

The demolitions in the Old Northside finally stopped in 1978 when the neighborhood was placed on the National Register of Historic Places. Then in 1980, a preservation plan for the area was adopted as part of the comprehensive plan for Marion County.

Still, the Old Northside faced many struggles in the 1980s, including a burgeoning prostitution trade which earned the neighborhood the dubious distinction as the top red-light district in Indianapolis.  In the mid-1980s, 40% of the prostitution activity in the entire county occured in a single square mile stretching from Meridian to Central and 12th to 22nd Streets. The Old Northside Neighborhood Association formed a Prostitution Committee, which worked with volunteers from Herron-Morton to clean the area of prostitution activity and the associated drugs and violence. 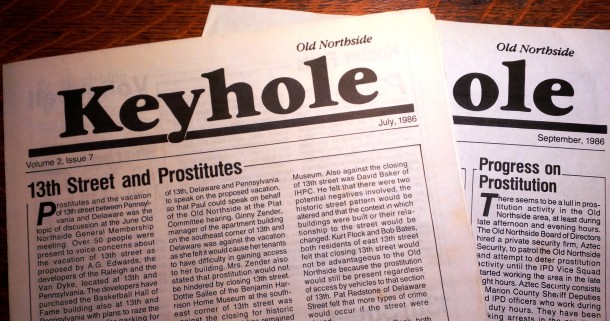 Over the next 30 years, the Old Northside was transformed.  New homes were built on vacant lots, and landmarks such as Forest Home (below, right), the house that Butler University founder Ovid Butler built in the 1840s, were restored to their former grandeur.  The opulent mansion at 13th & Park (below, left) was converted back to a private home after serving for decades as a private club.

In January 1989, the residents of the Old Northside knew the neighborhood had finally turned a corner when newly elected Lt. Governor Frank O’Bannon and his wife, Judy, bought a partially restored house at 1226 Broadway. 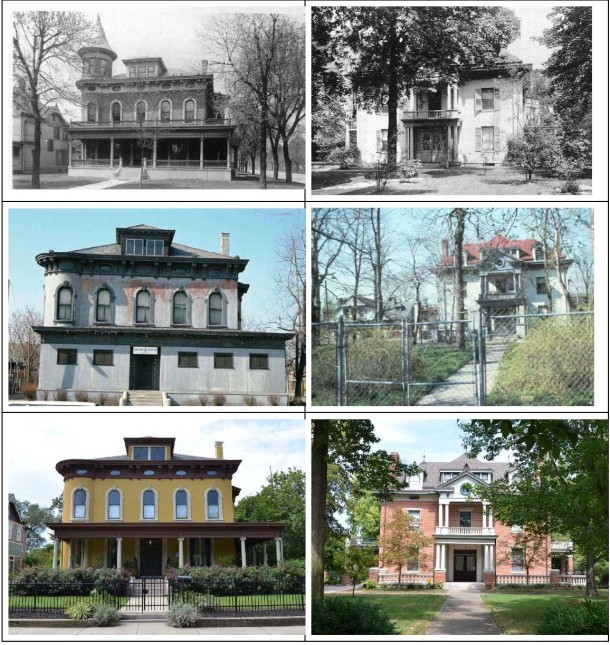 When Rick and Cyndi Patton started restoring 1508 Broadway, the home’s original footprint had been muddled by shoddy additions. So Rick started writing letters to everyone named Metzger in the Indianapolis phone book in an effort to find an early photo of the house before it was converted into apartments. Albert Metzger’s grandson showed up on their doorstep one Saturday morning with an entire album of photos from the home’s early days. The photos served as a blueprint for their restoration efforts. 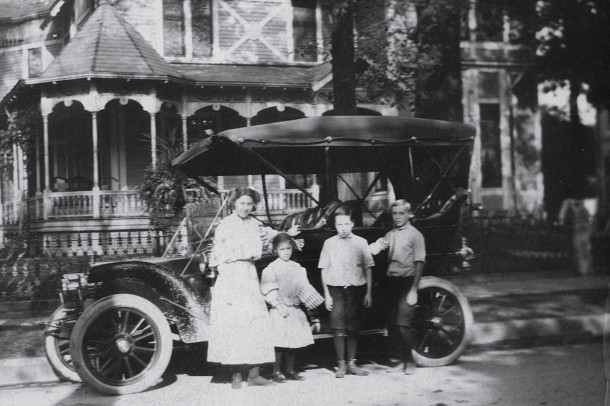 After living in the Old Northside for more than a decade, I’m inclined to believe that Frances Metzger may have gotten it turned around when she told The Indianapolis Star that happy people will make a place beautiful.  Because the simple fact is that beautiful places make people happy. Or at least that’s how I feel when I sit on my front porch and see the Patton’s grandchildren play on the lawn of the beautifully restored Victorian home where the Metzger children played 100 years ago.

A graduate of Cornell University, Albert Metzger founded several banks in Indianapolis, including the American National Bank and the German American Trust Company. In 1922, the latter bank merged with another bank founded by Metzger to create the new Fletcher Savings & Trust Company. Metzger served as vice president of the new bank, but was also busy with his real estate ventures, including construction of the Lincoln Hotel. When he died in 1931, his estate was valued at $1.1 million – approximately $15 million in today’s dollars. The Fletcher bank and celluoid mirror shown above are from David Yount’s collection.