When the youngest son of pioneer leader Calvin Fletcher graduated from Phillips Academy in 1865, he asked his classmates to sign an autograph book.

“Dear Al,” one faded inscription reads, “As we hope to meet at ‘old Harvard,’ I need not bid adieu…..your friend and classmate, Richard T. Greener.”

Greener would later go on to become the first African-American to graduate from Harvard University and the dean of the Howard University School of Law. But despite Greener’s optimistic inscription, Albert Fletcher never made it to Harvard, at least not as a full-time student. 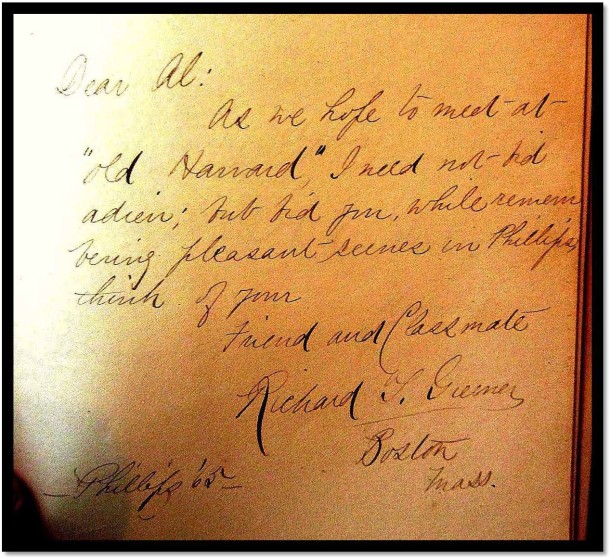 After repeatedly failing the mathematics portion of Harvard’s entrance exam, Albert enrolled in nearby Brown University and took an occasional class at Harvard. During breaks from school, he worked part-time at the bank established by his father and Thomas Sharpe, his future father-in-law. Albert’s older brother, Ingram, was already installed there, learning the ropes of the banking business under his father’s careful tutelage.

Then in 1868, Albert quit his studies and returned to Indianapolis to marry Eliza Sharpe and join his brother and Thomas Sharpe in running the Fletcher & Sharpe bank.

Of the nine sons of Calvin Fletcher, Albert seemed the least likely to take over the reins of his father’s banking business.  During Albert’s formative years, the elder Fletcher often fretted about his youngest son’s future. As recorded by Calvin Fletcher in his diary, Albert lacked aspirations, as well as “that furvor of expectation of doing much.”

In one incident that the elder Fletcher found particularly troubling, Albert failed to deliver an important note to a neighbor’s house because — according to his father — he either “could not find the house or rather .. could not get [through] the hedge.” Not surprisingly, Calvin Fletcher was “much dissatisfied at this – Quite as much for his lack of perseverance as for his lack of skill at finding the place.” 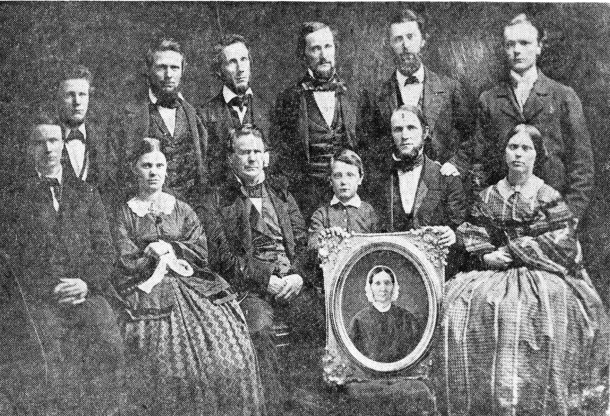 The Fletcher family posed for this portrait around 1855. Ingram is seated in the front row on the far left. Albert is the young child sitting next to his father, Calvin Fletcher, and clutching a portrait of his deceased mother, Sarah Hill Fletcher.

After Calvin Fletcher fell off a horse and died in 1866, Ingram Fletcher and Thomas Sharpe continued operating the bank.  Albert joined the partnership in 1868. 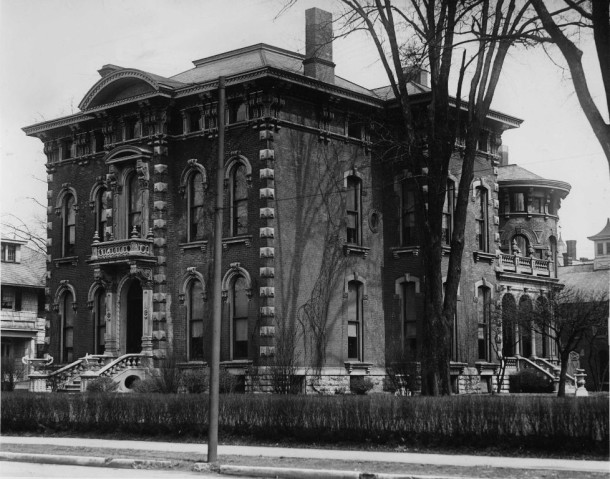 Although Indianapolis was struggling with a financial depression in the 1870s, business was booming at the Fletcher & Sharpe bank.  Albert and Eliza built an elegant Italianate Renaissance home on North Pennsylvania that boasted 14-foot-high double entrance doors, marble floors, extravagantly carved woodwork and bronze carvings.

Life in Indianapolis was great for Albert and Eliza Fletcher. Until it wasn’t. 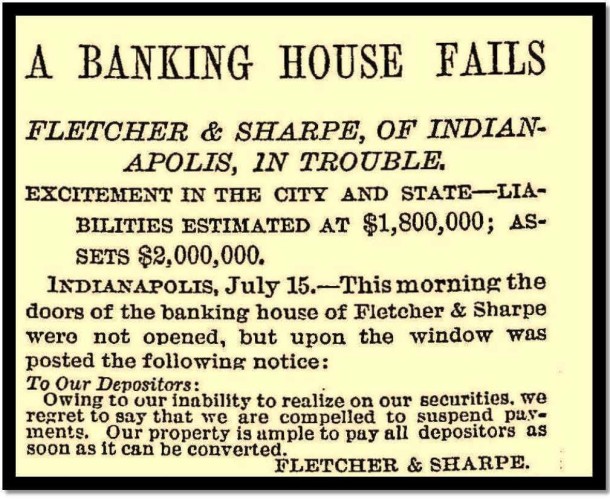 On the morning of July 15, 1884, customers arrived at the Fletcher & Sharpe bank to find the following notice posted on the door:

“To our Depositors: Owing to our inability to realize on our securities, we regret to say that we are compelled to suspend payments. Our property is ample to pay all depositors as soon as it can be converted.”

The sudden closure of one of the city’s oldest financial institutions hit “like a thunder-bolt from the clear sky,” according to historian Jacob Piatt Dunn. The Indianapolis News reported that the “hermetically sealed” doors of the bank were quickly besieged by an anxious throng, with the loudest wailing coming from small investors, especially those who were women. This was because Fletcher & Sharpe’s bank was favored by average citizens, many of whom had entrusted their entire life savings to the bank.

But the more seasoned investors remained calm in the knowledge that Thomas Sharpe and the Fletchers were honorable men who would do everything in their power to make good on their debts. “To have these honored names connected with failure seemed to the popular sense a contradiction in terms,” the News opined on July 16.  “With this realization came two feelings: One, that it was a failure likely to be worse than first apprehended; the other that the members of the firm would not temper the blast to themselves but would surrender everything.” 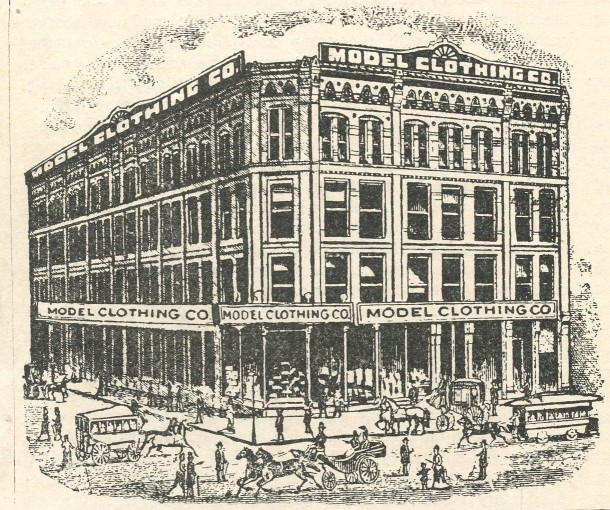 The Fletcher & Sharpe bank building on the southwest corner of Washington and Pennsylvania Street. After the bank’s demise, the building housed the Model Clothing Company.

Both Albert and Ingram Fletcher, along with their wives, voluntarily surrendered their entire fortunes for the benefit of their creditors.  Prostrated with exhaustion, a visibly shaken Ingram Fletcher told the News on July 16 that “everything in the world I have, and everything belonging to my wife — even her pictures — have been turned over to the bank.”

As the bankruptcy estate was settled, the Fletcher brothers’ homes, artwork, and opulent bank building on the southwest corner of Washington and Pennsylvania Streets were all sold.  However, even with the addition of the Fletchers’ personal assets, the bank was still $600,000 in the hole – a considerable amount in the 1880s.

Ultimately, the bank’s depositors received only 80 cents on the dollar, with more than half of that amount paid by Stoughton A. Fletcher, who operated his own successful bank but had agreed to join his brothers’ firm as an accommodation. 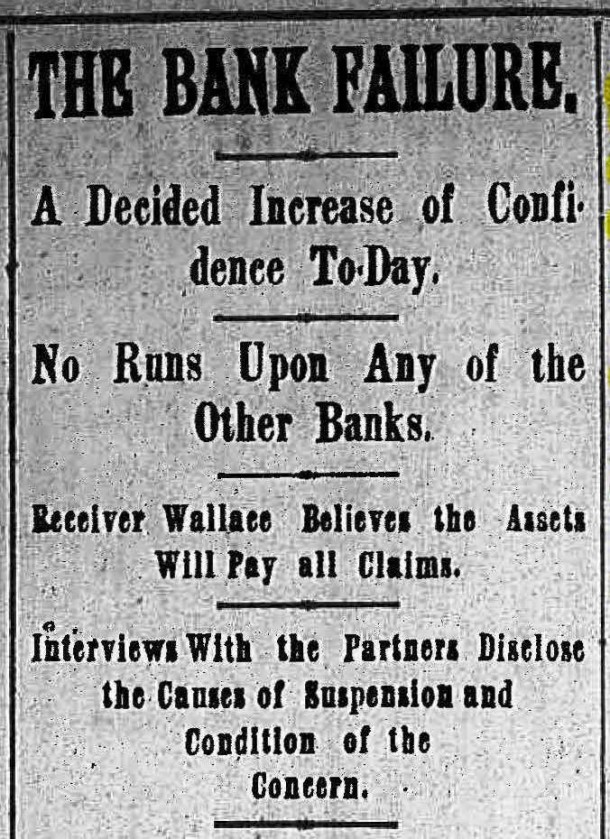 Ingram Fletcher told the News that the Fletcher & Sharpe bank could have been saved from ruin if he and his brother had been more aggressive in collecting on the debts owed to the bank by some of the city’s most prominent businessman. “We might have taken them by the throat and choked the life out of them, but in so doing we would have ruined many hard working, struggling and honest businessmen. We hadn’t the heart to do it,” Ingram said.

In an interview with the News, Albert made clear that “not one cent of defalcation has occurred in our bank, and not a scratch of the pen has been made dishonestly.  Even our living has been as economic as possible notwithstanding I was residing in a big house which was built by my own individual means outside of the bank.”

Despite the honorable manner in which the Fletcher brothers handled the bank’s demise, Albert and Ingram realized that their reputation was irrevocably tarnished and that they would never again engage in the banking business in Indianapolis.

As Ingram Fletcher told the News, “A woman who has lost her virtue may do everything to retrieve her character. But the place in society which knew her once will know her no more.” 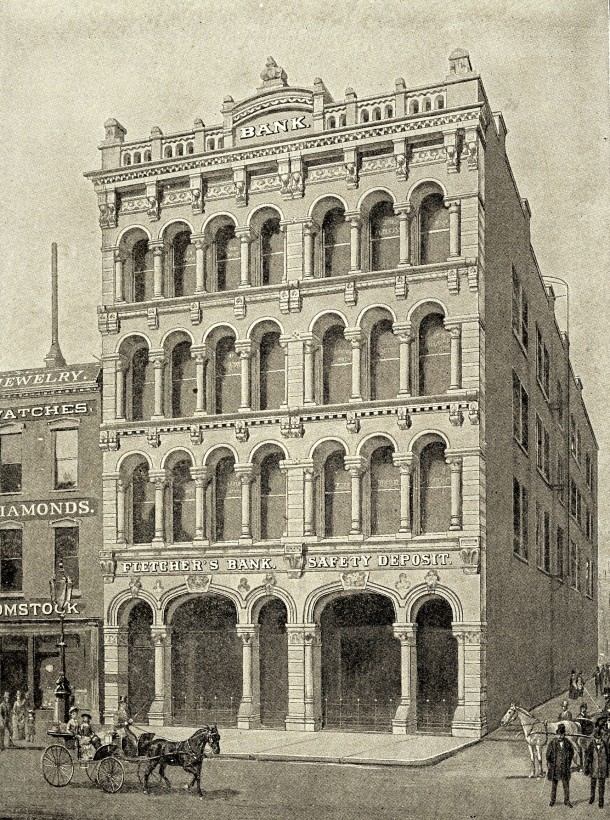 As a young man, Stoughton had learned the banking trade in a bank owned by his uncle, also named Stoughton Fletcher. The elder Fletcher’s bank proved to be the longest lasting of the Fletcher banks, merging with other financial institutions until it became American Fletcher National Bank (AFNB) in 1954. The Fletcher name finally disappeared from the Indianapolis financial scene in 1987, when AFNB was purchased by Bank One (now Chase).

Albert took a job as a traveling salesman for the Pneumatic Company, and he and Eliza moved to a smaller house on Pennsylvania Street. Around 1890, the family relocated to Philadelphia, and then to Farmington, Connecticut.  After a subsequent move to California to venture in real estate proved disastrous, Albert and Eliza returned to Farmington, where Albert died in 1918.

Ingram moved his family to Orlando, Florida to be near his wife’s parents. There, he operated a bookstore and engaged in insurance and real estate. In 1891, President Benjamin Harrison commissioned him as Orlando’s postmaster. He later became the first cashier of the State Bank of Orlando. Ingram died in 1903.

Of the three Fletcher brothers associated with the Fletcher & Sharpe bank, only Stoughton was relatively unscathed. Because he had not been actively engaged in making loans at the bank, he was able to keep his elegant mansion on Clifford Avenue (now 10th Street) adjacent to Woodruff Place.  His own bank, Fletcher & Churchman, remained open and he continued as president of Atlas Engine Works, a position he held until his death in 1895. He also remained active in civic and charitable circles. Upon his death the local newspaper recalled the contributions of the late Calvin Fletcher and said that Stoughton was “true to his ancestry,” and “a worthy son of a most worthy sire.” 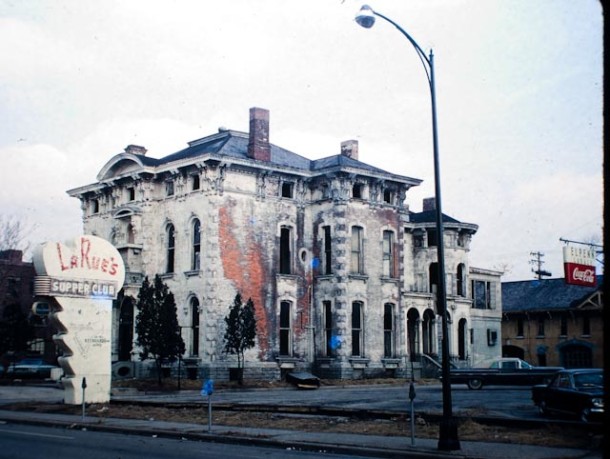 Albert Fletcher’s mansion remained a private residence until the mid-20th century, when it was converted into an elegant restaurant and nightclub. LaRue’s Supper Club was one of the city’s finest dining establishments until it was demolished in the 1960s to make way for construction of the interstate.

Now nearly 150 years old, Albert’s boyhood autograph book surfaced in California last month, where a seller offered it on ebay. Thanks to the inscription by Richard Greener, the book fetched $109.

In 2009, a contractor demolishing an abandoned house on the south side of Chicago discovered an old steamer trunk that contained Greener’s 1870 Harvard diploma — water-damaged but intact — his law license, photos and other papers connected to Greener’s remarkable life. Rufus McDonald sold the diploma and law license to the University of South Carolina for $52,000.  But when Harvard balked at his asking price for the remainder of the treasure trove in late 2013, the contractor threatened to “roast and burn” the documents.

Within a few days, McDonald’s temper had cooled, and he acknowledged that the threat was simply a stunt aimed at getting Harvard’s attention. “They tried to push me to the side like a dirty old dishrag,” McDonald told the Chicago Sun-Times. At last reporting, McDonald was hoping to sell the Greener archive to “a wealthy black Harvard alumni,” rather than the university itself. 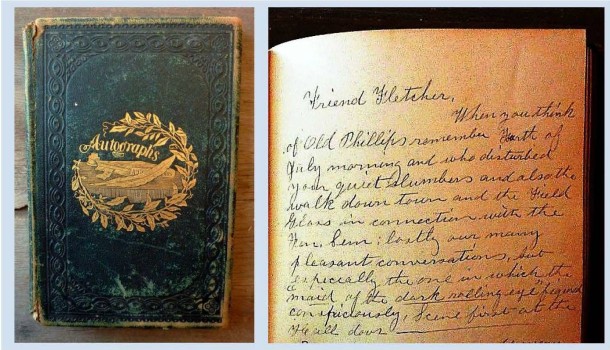 Albert Fletcher’s 1865 autograph book was inscribed by 45 of his classmates and instructors at Phillips Academy in Andover, Massachusetts. The colorful note pictured above is from Augustus Steinfield.