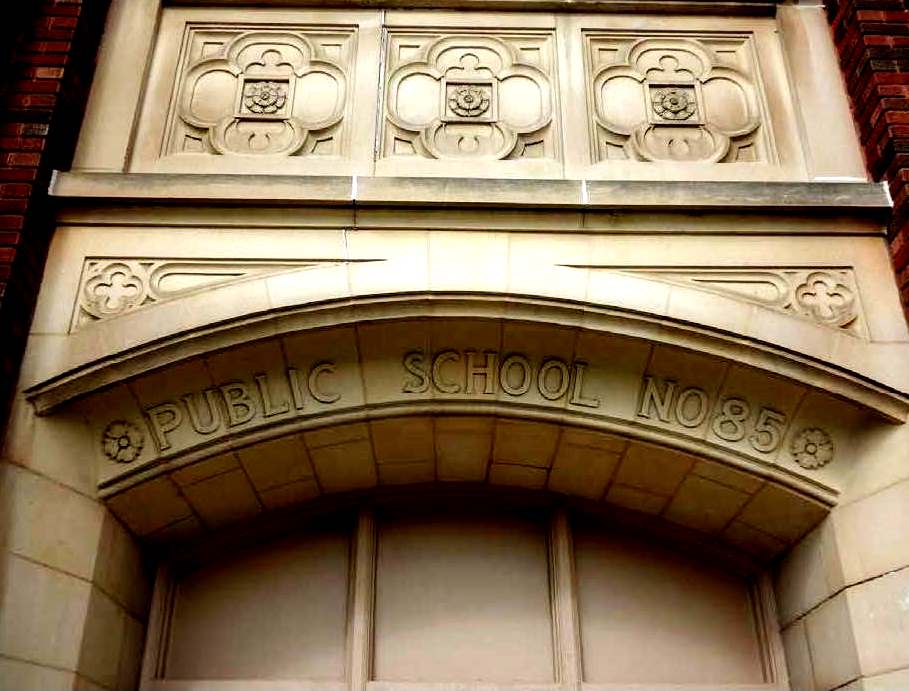 In the closing days of the Civil War, Indianapolis Public Schools superintendent Abram Shortridge found himself in a unique situation — an “adventure,” as he called it.

Almost every position within the state’s largest school system was filled by a woman.  Every principal, every assistant, and all but two teachers in the IPS schools were women, and young women at that.

“It is due to the administrative abilities displayed by these young women … that the discipline and good order of the schools has been sustained at a high standard, and the several grades were never in better condition than under their control,” Shortridge said in his report to the Common Council for the 1865-66 school year. “Although we know of no school system, so large as ours, in which the charge is so completely within the hands of women, the adventure — if it may be so called — has ceased to be an experiment.”

Yet something was missing from the halls of IPS, Shortridge conceded. 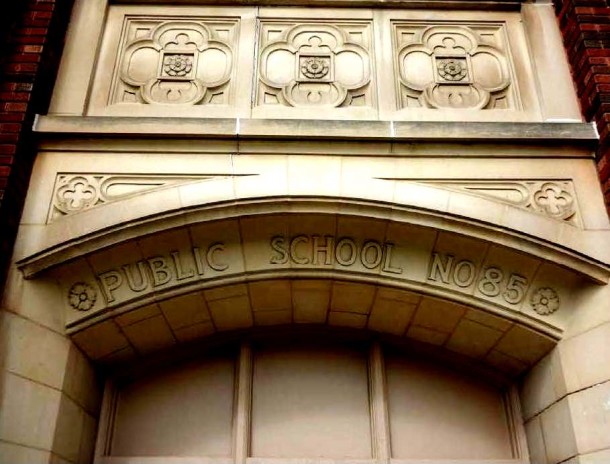 School 85 opened in 1928 in the 300 block of S. Arlington and was named after George Loomis, IPS’s first director of music. Photo courtesy of Vintage Irvington at vintageirvington.blogspot.com.

“I have many times heard singing in the school-rooms that was very unpleasant to listen to,” Shortridge said. In fact, some of this “singing” was so loud and discordant that Shortridge actually feared for the safety of the students’ vocal cords.

It was time, according to Shortridge, for IPS to follow the lead of other large cities such as Boston, New York, and Chicago, and start teaching music in the public schools. 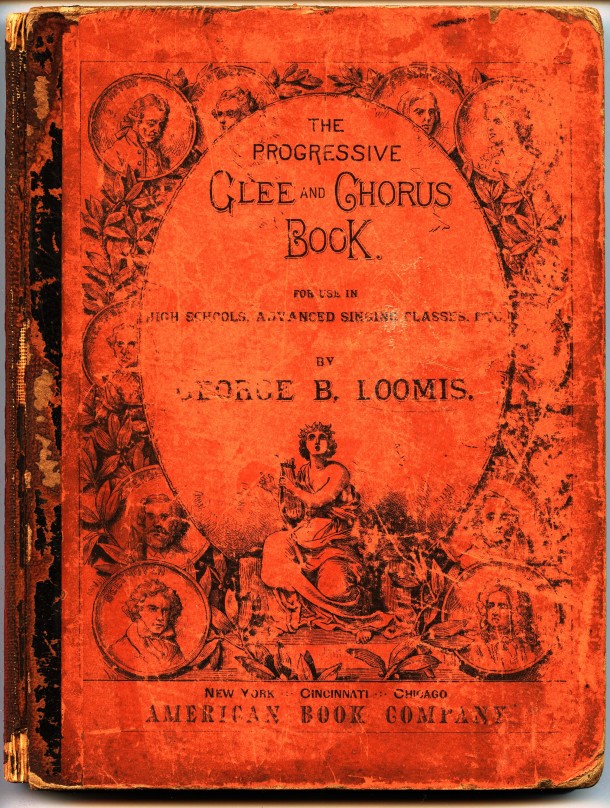 A friend and fellow IPS history enthusiast recently found this Loomis textbook at a local estate sale. It was published by the American Book Company, a trust that was established in hopes of crushing competition from the Indiana School Book Company.

In the spring of 1866, Shortridge convinced a young music instructor to leave his post in Wooster, Ohio and start a music program in the Indianapolis Public Schools.  The task ahead of George B. Loomis was challenging.  Because the study of music had not been part of the school district’s curriculum, the same music book was used for all grades, with no effort to build on the students’ knowledge of music as they advanced from first grade to high school.

Further, because Loomis was the only music teacher in IPS, most students received just twenty minutes of music instruction each week.

But Loomis had a plan to provide for daily music instruction in the primary grades without hiring more teachers. In addition to personally providing music instruction to the high school students, he would teach the elementary school teachers how to teach music themselves so they could incorporate music into their daily lesson plans.

Of course, in order for the plan to succeed, IPS would need to focus on hiring teachers who could actually sing. 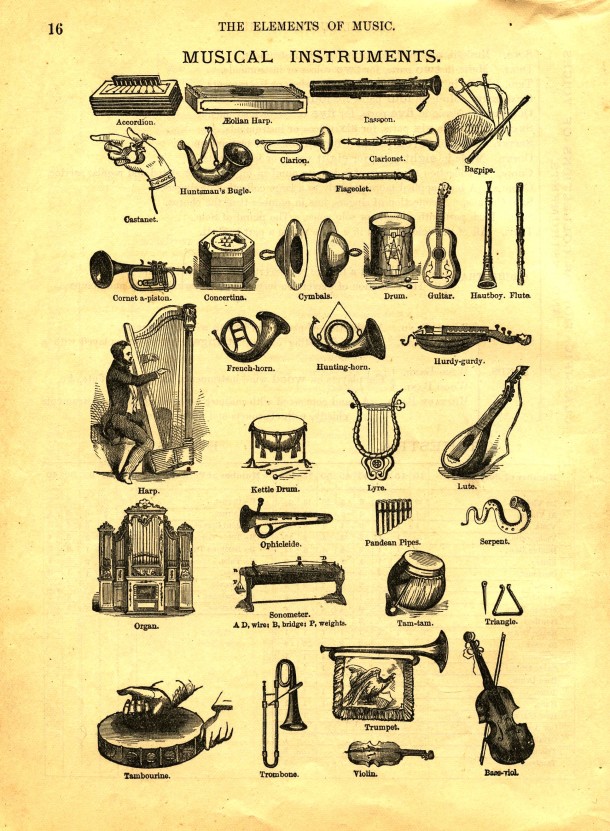 Loomis developed a series of books that were targeted at specific grade levels and that could easily be used by any teacher.  Loomis’ Progressive Music Lessons were introduced in 1870 at 10 cents a copy, and were widely used in school districts throughout the country.

By 1879, Loomis was earning $1,150 per year, which translates to approximately $27,000 in today’s dollars.  At the time, it was one of the highest salaries in the IPS schools. Which, unfortunately, made Loomis’ salary and the music program ripe for the chopping block when the IPS board was forced to cut costs.

Faced with a funding shortfall in 1883, the board reduced the school year from forty weeks to thirty-eight, trimmed 20 minutes from the school day, cut art lessons in half, and fired George Loomis. 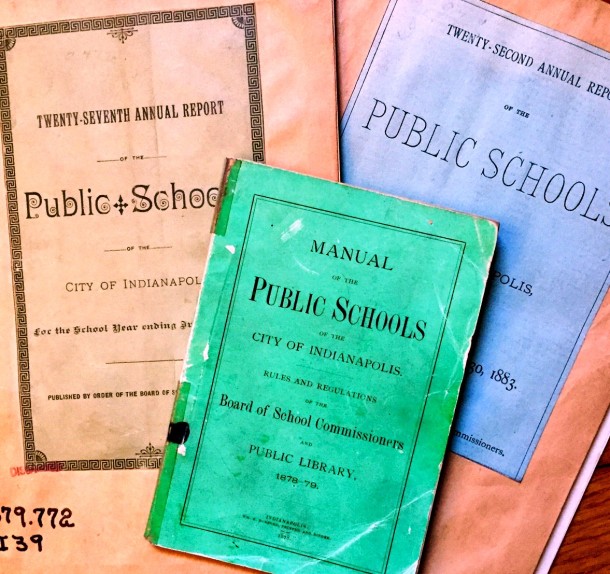 Old IPS reports and manuals provide a wealth of information about education in Indianapolis during the 19th century. I found the 1878-79 IPS School Board manual and the 1883 and 1888 annual reports on ebay. Electronic versions of some early IPS documents are also available on Google books or via the Internet Archive.

Although Loomis had the profits from his books to fall back on after he lost his job with IPS, the lucrative textbook publishing business was beginning to come under scrutiny.  In October 1885, The Indianapolis News published a scathing editorial accusing Loomis and his publishers of establishing a “singing book monopoly.”

According to the News, Loomis had recently issued a revised No. 3 in his Progressive Series that barely differed from the previous version, yet parents were forced to discard the old books and buy the new. “It is the wish of parents just now cramped for means that the ‘progressive’ series last at least until Christmas, before the ‘No. 3 advanced’ or No. 3 1/2 or 4 is ordered to take its place,” the News noted wryly.

Loomis died two years later at the age of 50, just three months after he and his wife buried their infant son. 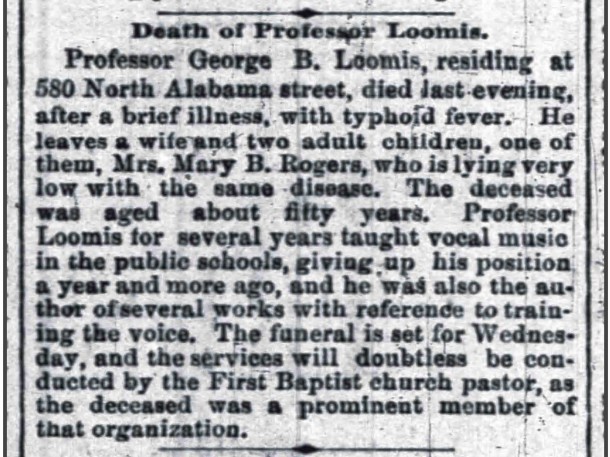 By the time Loomis died in 1887, the public had become outraged by the cost of textbooks and the lobbying tactics of the so-called “School Book Trust.” At the time, textbooks were adopted by local boards of education, which meant that publishing agents swarmed like flies across the state, currying favor with school board members by plying them with dinners, drinks and theater tickets.

In 1888, parents were paying between $2 to $3 per year for each child’s textbooks, which amounts to $50 to $75 in today’s money.  And children whose parents couldn’t afford textbooks often dropped out of school or missed weeks of classes until their families could scrape together the money or a charity provided the books.

Congressman Alvin Hovey, who was running for governor on the Republican ticket, made free textbooks one of the major planks of his successful campaign.

“Now we call our schools free but they are not free and will not be free until the State furnishes books as well as teachers and [school]houses,” Hovey told The Indianapolis News in February 1889.  But by then, the governor’s plan for free textbooks was already in trouble in the General Assembly. 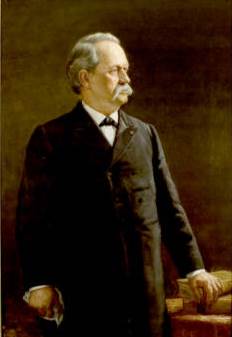 Catholic lawmakers would not support the free textbook bill because their constituents who sent children to parochial schools were already paying for a public school system they did not use.  Lutheran legislators shared that sentiment.  And many people believed that the practice of lending books at no charge would encourage students to be careless and could even spread contagious diseases.

Nevertheless, public outrage over textbooks prices demanded that the legislature do something to ease the pain on parents’ pocketbooks.  The 1889 textbook law shifted the responsibility for selecting textbooks to the State Board of Education. The board would then enter into statewide contracts that required publishers to furnish books at set prices ranging from 10 cents for a first reader to 75 cents for a complete geography.

Hovey reluctantly let the bill become law without his signature.  The board issued a series of advertisements calling for bids.  However, there was now a deafening silence from the very same publishers who had clamored for the “direct contract” law and had told lawmakers they would most certainly bid.

After several rounds of advertisements with no bidding, the board was beginning to believe that Indiana would have to revert to the old system of textbook purchases that had proven so lucrative for the publishing companies. 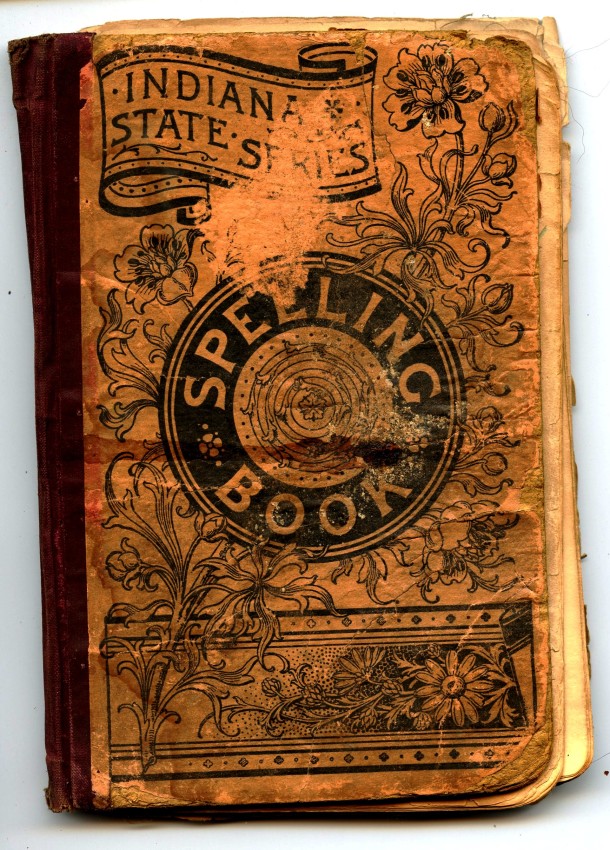 An 1891 spelling book published by the Indiana School Book Company

On July 1, 1889, the State Board of Education met at 8 a.m. for yet another effort to open bids.  By noon, none had been received, although a representative from the one of the large publishing houses had sauntered into the room and declared that his company could not possibly provide modern textbooks at the prices required under the new law.

Just as the board was beginning to abandon hope, a surprising development occurred.  Edward Hawkins, a prominent Democrat and former U.S. marshall from Indianapolis, submitted a bid from the Indiana School Book Company, a brand-new company that had been established for the sole purpose of furnishing textbooks to Hoosier students.

The bid was accepted, and overnight the Indiana School Book Company became the state’s largest textbook publisher, even though it had no plant, no presses, and only a handful of employees. 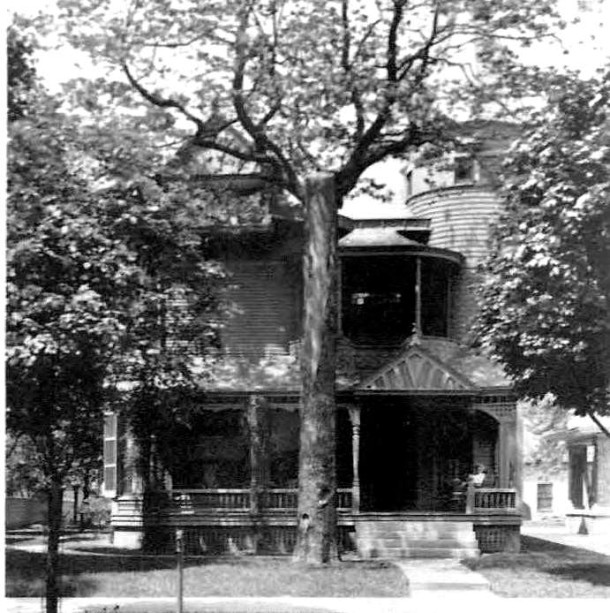 Edward Hawkins and his family lived at 1518 Broadway, above. The home has since been demolished.

Although Hawkins and the other founders of the Indiana School Book Company originally pledged to build a massive plant in Indianapolis that would put hundreds of men to work, it ended up outsourcing all of the printing to the Standard Publishing Company in St. Louis.  In an effort to win back their profits, the four largest textbook companies in the U.S. formed a new trust in 1890 called the American Book Company and purchased the plant where the Indiana school books were printed.

Thus began a spirited round of competition between the Indiana School Book Company and the “Big Four” that would be fought out every six years for the next quarter century when new contracts were let by the State Board of Education.  Even the homegrown Indiana School Book Company came under scrutiny from state lawmakers in the 1890s for allegedly being in cahoots with the Big Four to fix textbook prices.

While it did not win every state textbook contract, the Indiana School Book Company remained in business until Hawkins’ death in 1914. Within a few short years, however, the public cry for free textbooks had once more risen to a crescendo.  But to no avail. 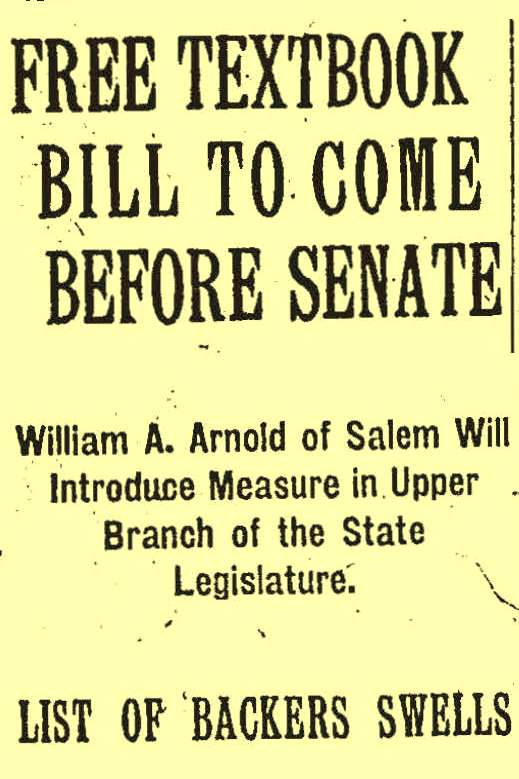 After a free textbook bill was introduced in 1920, a writer for The Indianapolis Star penned the following prescient words:

As certain as the appearance of a horde of hungry job seekers at the coming session of the Legislature will be the return of several bills which more than once have been counted out the dread sentence of indefinite postponement. Some have gone to the legislative graveyard amid the jests of merry executioners, others have succumbed after a bitter fight.  They all come back.  Among this number is the bill to provide free textbooks for the school children of Indiana.

Nearly 100 years and dozens of free textbook bills later, Indiana remains one of the few states that does not provide free textbooks for all children.  But at least children who live in poverty no longer have to rely on charity for their school books. Under current law, state funds and local property taxes completely cover the cost of textbooks for students whose family income qualifies them for the federal free and reduced price lunch program.  At last count, that was roughly half the students in the state of Indiana. 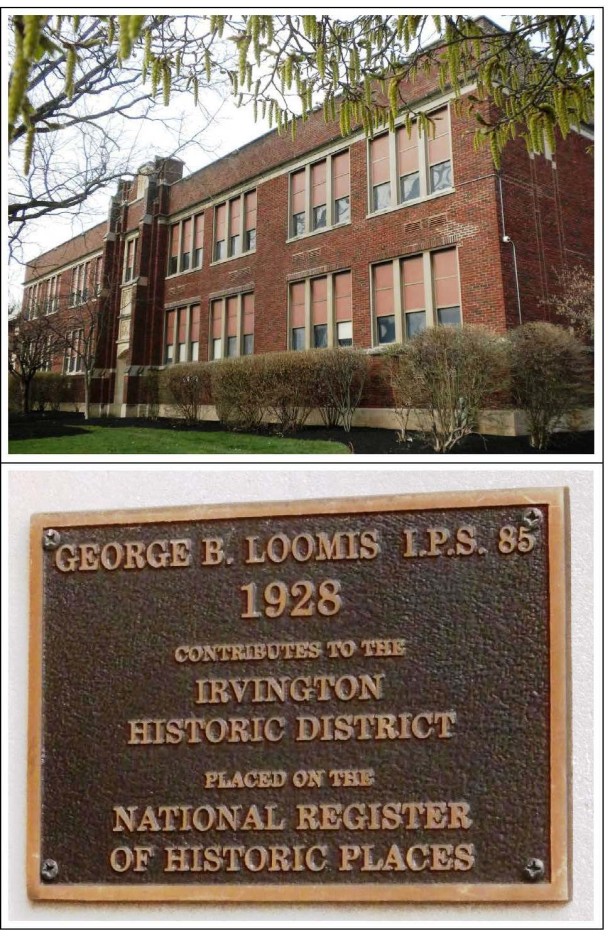 George B. Loomis School #85 was among 9 schools that IPS was forced to close in 1997 as a result of declining enrollment. The building was sold for $70,000 and has been readapted for offices. Photos courtesy Vintage Irvington.