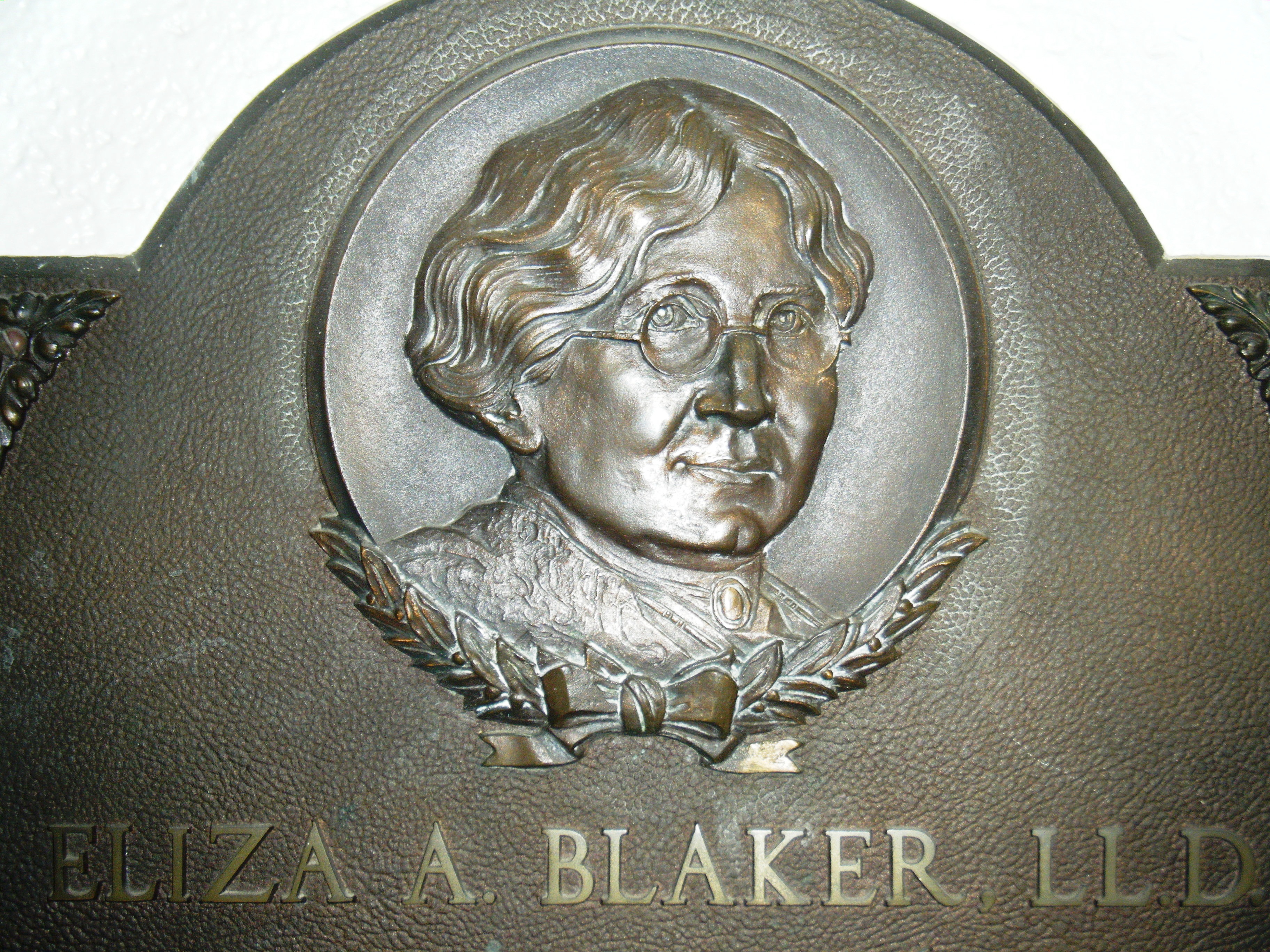 “Most of what I really need to know about how to live, and what to do and how to be, I learned in kindergarten.”

More than a century before writer Robert Fulghum penned his bestselling book about life lessons learned in kindergarten, a group of well-connected Indianapolis women heard about the success of kindergartens in Boston and San Francisco and decided that a similar program in Indianapolis could help give the city’s most impoverished children a fair start in life.

The Indianapolis Free Kindergarten and Children’s Aid Society was incorporated in the early 1880s to “surround the young with wholesome influence… to lead them to the formation of right habits; to prepare the child for school and future life; …. to feed the soul, and where necessary, to feed and clothe the body.”  In those days, kindergarten served children from ages 3 to 6. While most kindergarten programs were aimed at serving children from wealthy families, the society’s members saw free kindergarten as a way to break the cycle of poverty in Indianapolis and start young children on a path that would eventually lead them away from the city’s slums. 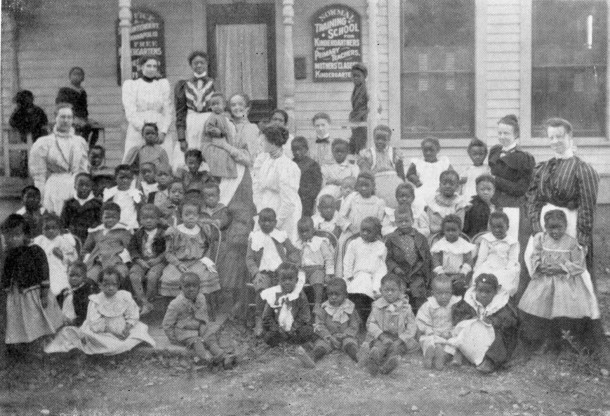 In 1893, the Free Kindergarten Society used donations to erect a kindergarten building for African-American children on Coe Street opposite the City Hospital. It was later named the Mary Turner Cooper Kindergarten in honor of Blaker’s sister, who was its first principal.

Although educator Friedrich Froebel started the kindergarten movement in Germany in the late 1830s, the concept of kindergarten was still relatively new to the United States when the society opened its first free kindergarten in Indianapolis.  So new, in fact, that only six years earlier one of the most popular “exhibits” at the Centennial Exposition in Philadelphia was a demonstration kindergarten class.  Steady streams of visitors poured past the exhibit three days a week to watch a group of orphans sing songs, play games and make handicrafts. One of the more frequent visitors was a young teacher named Eliza Blaker.

Fascinated by the possibilities of early childhood education, Blaker enrolled in the Centennial Kindergarten Training School and embarked on a teaching career in Philadephia. Then one day, an interesting letter arrived.  Hiram Hadley, a respected educator from Indianapolis, and former Indianapolis Public Schools superintendent Abram Shortridge were looking for someone to teach kindergarten in a private school they were opening. Blaker snapped up the opportunity to move to the midwest. Her husband, Louis, was ailing, and the couple believed that the Indianapolis climate would be beneficial to his health.

As luck would have it, the founding of the Indianapolis Free Kindergarten Society roughly coincided with Blaker’s arrival in Indianapolis to teach at the tony Hadley Roberts Academy on North Meridian Street.  Trained kindergarten teachers were a rarity, so the society asked Blaker to quit her new job and organize a free kindergarten.  From that day until  her death in 1926, Blaker devoted her life to building a sustainable system of free kindergartens to serve the city’s neediest children. 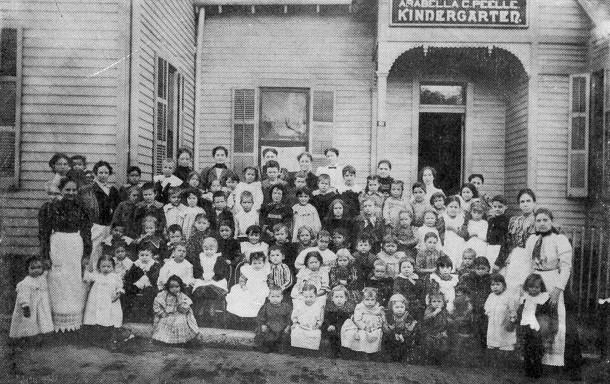 The Arabella C. Peelle Kindergarten was located on West Pearl Street and named in honor of Mrs. Stanton J. Peelle, who raised funds to purchase the lot and construct the building.

A few months before Blaker’s death, more than 500 people packed the Propylaeum to pay tribute to the woman who was hailed as the Jane Addams of Indianapolis. In honoring her long-time friend, Mrs. John Kern thanked Blaker for dedicating her life to education and told the crowd that through her work, Blaker had likely exercised a greater influence and molded more lives in Indianapolis than any other person who ever lived in the community.  Nearly a century later, I’m inclined to believe these words are still true.

I probably drove by the sign for Eliza Blaker IPS School 55 at least a thousand times during the decade that I lived on East 54th Street.  If I ever wondered who Eliza Blaker was — and I can’t recall that I did — I certainly never made the effort in those pre-Wikipedia days to track down information about the name on the sign that I passed each time I went to the Glendale Mall or drove to the Target at 52nd and Keystone. But a few weeks ago my curiousity was finally piqued when I found an old book at a flea market titled “Eliza Blaker: Her Life and Work.”  I plunked down $3 for the slim volume and then spent the next several hours reading about the kindergarten teacher from Philadelphia who left an indelible mark on Indianapolis.

The sign from the Coe Street kindergarten points out that the building’s services also include teacher training and mother’s classes. Over the years, Eliza Blaker worked closely with IPS on kindergarten programs, but in 1911 she successfully sued the school district in an effort to compel the board to levy higher taxes for kindergarten. Apparently there were no hard feelings over this “friendly lawsuit,” because in 1958, IPS named a school in her honor.

In September 1882, Blaker opened the first free kindergarten in Indianapolis at the Friendly Inn, a place of refuge and rehabilitation for destitute men on West Market Street in one of the most impoverished neighborhoods in the city. While we’ve all heard stories about modern day teachers scrounging for crayons, paper and other supplies, the shortages were even more extreme at Blaker’s first school, which lacked such basic amenities as chairs. During the first few months, the children learned their lessons while perched on pieces of wood cut by the homeless men who frequented the Friendly. Teachers begged local merchants for paper. But despite the challenges, Blaker remained enthusiastic about the benefits of kindergarten and was successful in swaying public opinion in support of the new and still controversial educational model.

Within two years, Blaker was operating three free kindergartens out of churches in the downtown area, including a kindergarten for African-American children in the African Methodist Episcopal Church on West Vermont Street. By 1900, there were 23 free kindergartens in Indianapolis. The society received donations to construct two freestanding kindergarten buildings, but most of the programs were run from rented houses, churches or other benevolent institutions such as hospitals, orphan asylums and settlement houses.

Blaker’s vision of kindergarten did not stop at school house door. She saw the need for a system of social work that would reach all members of the family.  Mothers needed to be trained how to properly engage their young children’s active minds, so Blaker established parenting classes and mother’s clubs at each kindergarten.  Older children needed to learn how to keep house and care for the younger children as many mothers were now working outside the home.  Many of the children needed clothes, shoes and even baths before they could attend kindergarten. But the most glaring need was for trained kindergarten teachers. One of Blaker’s first actions was to set up a school in her own home to train young women to teach in the rapidly growing number of free kindergartens in Indianapolis. 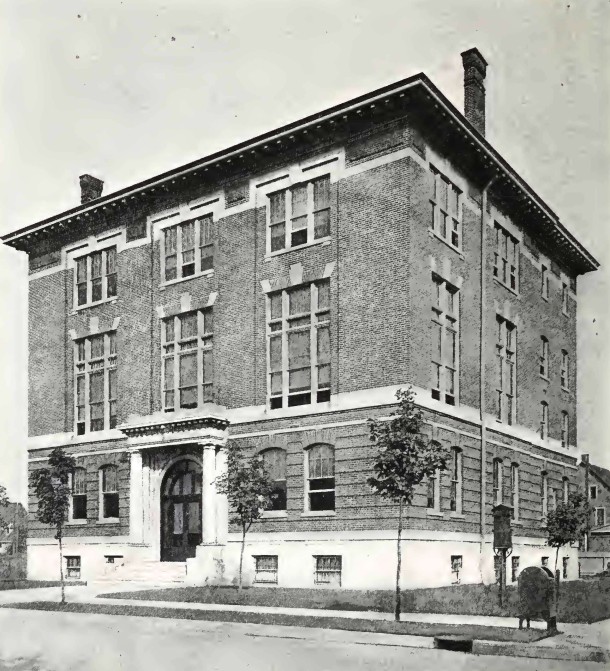 As the Teachers College of Indianapolis grew, additional property near 23rd and Alabama was purchased to expand the footprint of the original building. Blaker eventually sought to have the college unite with Butler University’s training school for secondary teachers. A few years after her death, the college’s property was transferred to Butler and Blaker’s school officially became part of Butler’s College of Education.

The first class of eight women to graduate from Blaker’s training school were granted the free use of the English Opera House for their commencement exercises.  Although enrollment grew to more than 300 women by the end of the century, the school lacked a permanent home until 1905, when the Indianapolis Teachers College building was erected at 23rd and Alabama. 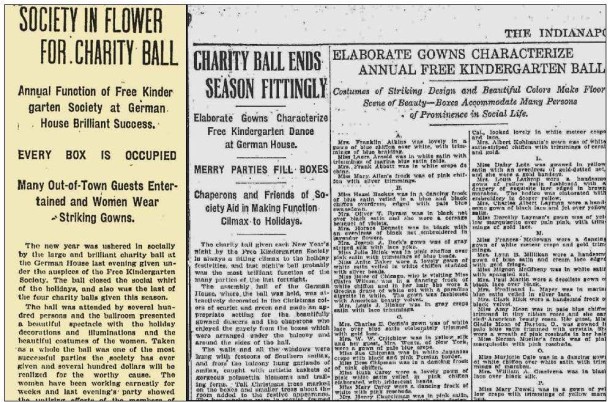 In 1901, Blaker successfully lobbied the Indiana General Assembly to authorize a property tax levy for kindergarten.  By 1910, Indianapolis had 28 free kindergartens serving more than 3,000 children a year between the ages of 3 and 6. However, pressures were mounting on the system as the ranks of immigrants swelled and underserved areas throughout the city were clamoring for free kindergarten.  Blaker went back to the Statehouse in 1911 and returned home with a new law that expanded the authority of the IPS Board to levy additional tax dollars for free kindergarten.

The business community was one of Blaker’s strongest allies in her fight for kindergarten funding. In its plea to state lawmakers in 1911, the Commercial Club wrote “The wise care of little children is a matter vital to the state’s welfare; it is false economy to neglect the child in the earlier years and later to expend large sums for reforming evil habits that might have been prevented.”

This simple logic makes as much sense today as it did 102 years ago. In fact, the “pay now or pay more later” message delivered by the Commercial Club in 1911 is the sort of obvious truth that a person learns in kindergarten.  That’s why I shake my head with dismay whenever I think about how Indiana has plummeted from being one of the first states to publicly fund kindergarten in 1901 to being one of the last states in 2013 to provide absolutely no state funding for preschool.

This year, the Greater Indianapolis Chamber of Commerce (the successor to the Commercial Club)  joined with a broad base of advocates from the business, education and nonprofit sectors to ask the legislature to finally provide public funding for preschool programs. In its 2013 legislative agenda, the Indy Chamber called on state lawmakers to support the development of publicly funded, outcome-focused, Pre-K programs as well as mandatory, fully-funded full-day kindergarten. As the 2013 session draws to a close, it looks like the Indy Chamber and other advocates for early childhood education will return home with a glass that is more half empty than full.

That’s the good news. But 130 years after Eliza Blaker opened the first free kindergarten in Indianapolis, kindergarten is still not mandatory, children aren’t required to attend school until age 7, and state funding for preschool will again be relegated to a summer study committee.  Makes me wonder if some legislators were absent from kindergarten on the day that the rest of us learned that most of what we really need to know about how to live, and what to do and how to be, we actually learned in preschool.

UPDATE: Since this article was written in 2013, full-day kindergarten has been fully funded and the General Assembly has approved $12 million in annual funding for two relatively small pre-K pilot programs. 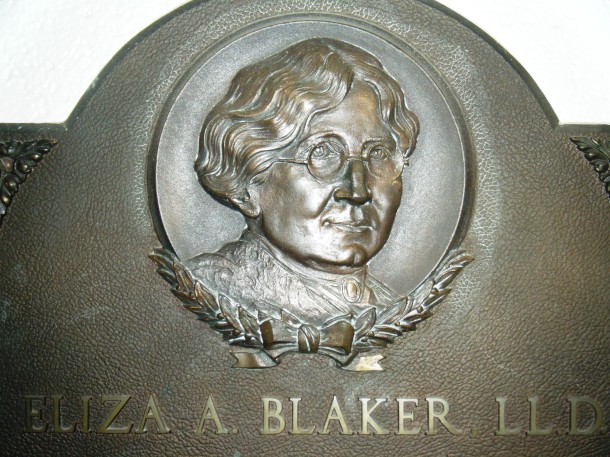 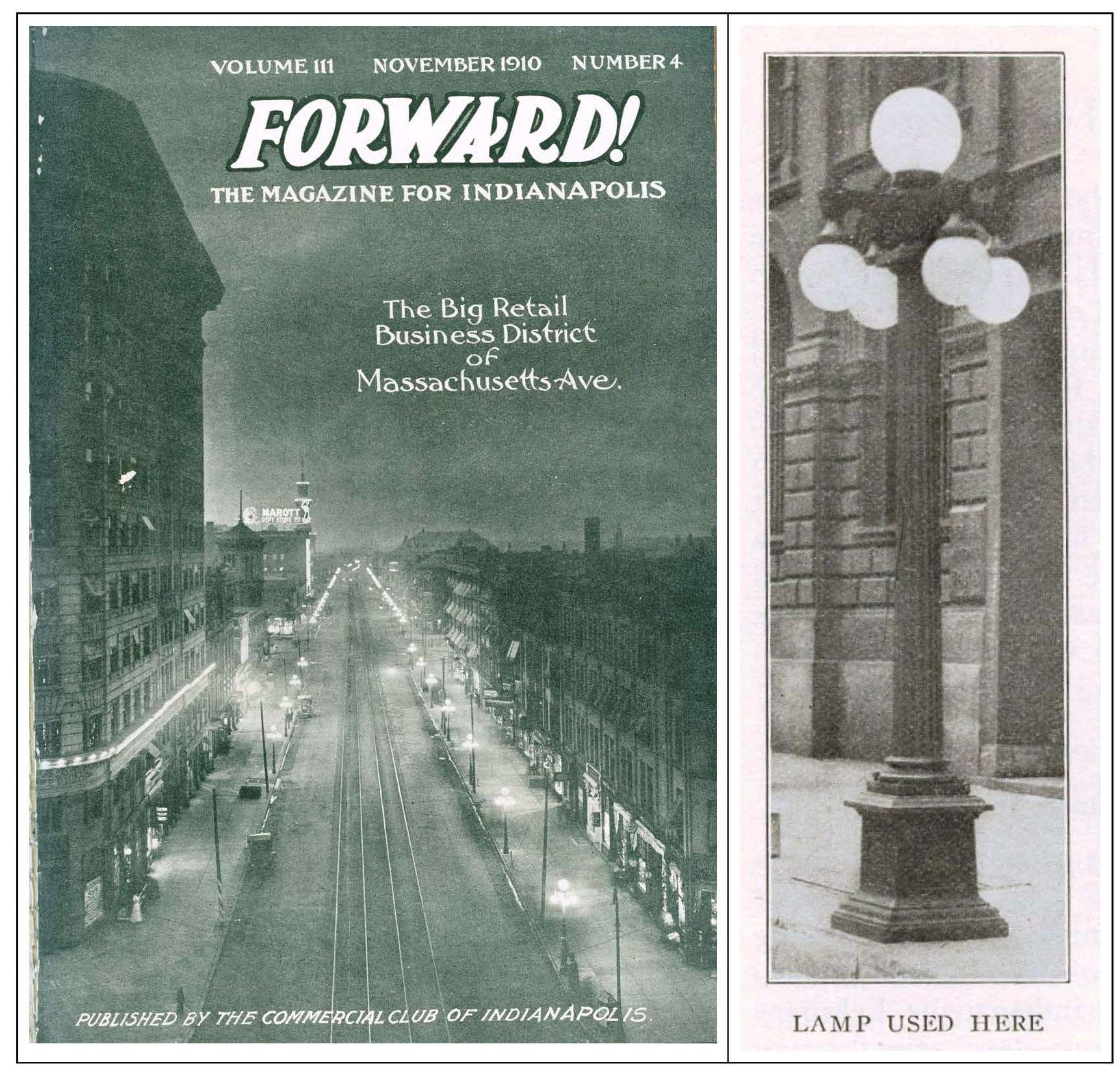