Wulfson in one of his many disguises

Isidor Wulfson was an international opera star, a Yiddish stump speaker, a master of disguises, and a famous detective.

He also was the Chief Weights and Measures Inspector for the City of Indianapolis and quite possibly The Most Interesting Man in the World.

I stumbled upon Wulfson’s strange tale completely by accident while researching some old Indianapolis postcards. Around 1910, the Polar Ice & Fuel Company issued a series of postcards that showed one of its horse-drawn wagons in front of various local landmarks, including several long-demolished buildings. Since May is Preservation Month, I’d originally planned to feature Polar Ice and its postcards in this week’s HI article. But everywhere I looked for information about Polar Ice, Wulfson’s name kept surfacing.

Starting in 1906, the newly appointed Inspector of Weights and Measures and former opera singer staged and starred in an Ice Crusade of epic proportions.  Wulfson’s mission: to track down and arrest all ice company delivery men and their bosses who Wulfson believed were swindling local housewives in their daily purchases of ice. As the largest ice dealer in Indiana, Polar Ice & Fuel was the natural target of Wulfson’s unorthodox investigative techniques. 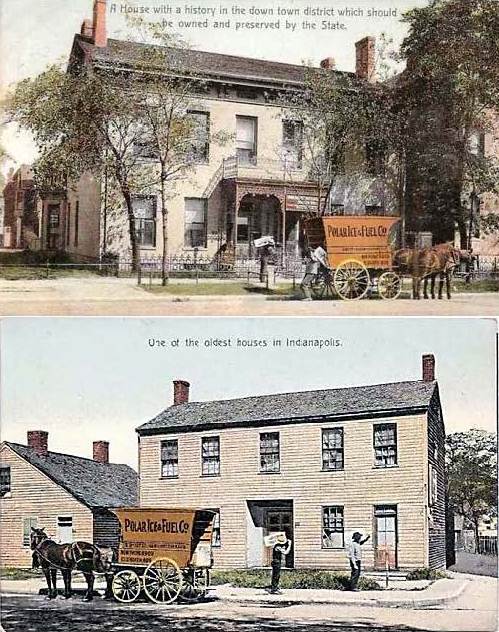 TOP: Gov. Oliver P. Morton’s house stood on the southeast corner of Pennsylvania and New York. Efforts to preserve the home as a historic site were unsuccessful, and it was demolished in the early 1900s. BOTTOM: Originally located on Illinois near Meridian Street, this house had been moved to the 300 block of Senate Avenue at the time this photo was taken.

The warm winter of 1905 had left most of the midwest in the grip of an ice famine, with customers paying exorbitant prices  for the frozen blocks of water that were necessary to keep their food and milk from spoiling.  Angry housewives accused delivery men of “short-weighting” them in their daily ice orders.  Rumors swirled of a Rockefeller-style trust among the local ice merchants that drove out competition and kept prices unnaturally high.  As the summer wore on, the chilling issue of ice — its availability, its price and even its weight — became a political hot potato for newly elected Mayor Charles Bookwalter and his recent appointee, Isidore Wulfson.

In June 1906, Bookwalter issued an order that required every ice delivery wagon in the city of Indianapolis to be fitted with scales to weigh each customers’ ice order. As chief inspector of Weights and Measures, Wulfson was responsible for ensuring that the scales were not tipped in the ice companies’ favor and that the customers were getting their money’s worth of the frozen stuff.

This 1906 advertisement from The Indianapolis Star stresses that Polar Ice customers will receive “prompt service” and “full weight” when the Yellow Wagon delivered ice to their homes.

Now, most people might think that being in charge of weights and measures is likely the most boring job in government.  In fact, Wulfson himself told the American Magazine in 1911 that the motto of the office when he took over in 1906 was “Draw your salary and keep your mouth shut; don’t work.” But from the outset of his reign as Chief Inspector, it was clear that Wulfson was not content to sit behind a desk in a windowless office in the bowels of a government building.

Employing clever disguises and Pinkerton-style investigative techniques, Wulfson single-handedly launched guerilla warfare against Polar Ice & Fuel and other local ice companies that he believed were swindling the overheated public. Rising each morning at 4:00 a.m., Wulfson would follow ice wagons on foot and lurk behind trees and trashcans to observe whether the driver was using rigged scales. He would sit at kitchen tables, his face hidden behind a newspaper, and surreptitiously watch to discern whether a housewife was being cheated. And when the unsuspecting driver was caught dead to rights, the diminutive inspector would leap into full view, declaring “Do you know who I am? I am Wulfson.”

No further introduction was needed.  During the first two decades of the 20th century, Wulfson was one of the most well-known political figures in Indianapolis.  Thanks to his theatrical tactics and flair for publicity, Wulfson managed to get his name in print in The Indianapolis Star on 785 different occasions between 1903 and 1922.  In 242 of these articles, he was even mentioned in the headline. 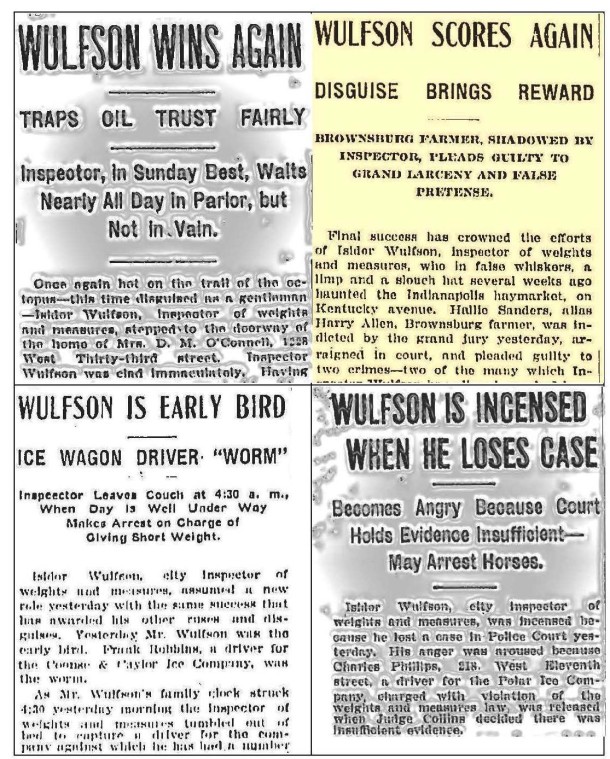 During the eight years he held the office of Chief Inspector, Wulfson waged a nonstop war against the so-called “Ice Men.”  A particular object of his wrath was Henry L. Dithmer, manager of Polar Ice & Fuel.  The feeling was apparently mutual, because in July 1911, both men made headlines when they came to blows in a courtroom and had to be physically restrained.

Wulfson had the last laugh, however, at least in that particular spat with Dithmer. A few days later, he called on the assistance of the Police Department to help him investigate allegations that drivers for Polar Ice & Fuel were refusing to weigh the ice upon delivery as required by local ordinance.  When a driver was caught red-handed with “hot” ice, he whipped his horses and bolted from the scene of the crime.

Wulfson maintained that Dithmer was ultimately responsible for the missing driver’s criminal behavior, and persuaded the police go to Dithmer’s office and put him under arrest.

Two years later, it was Dithmer’s turn to laugh when a judge threw out a case against one of his drivers for insufficient evidence. An angry Wulfson told The Indianapolis Star that the next time he arrested an ice man, he would arrest the whole company, and if necessary, “I also will arrest their horses and wagons.”

Wulfson’s threat to arrest the Polar Ice ponies never came to fruition, however.  The company was slow to convert to gas-powered trucks, instead relying on more than 100 horses and mules to make daily deliveries of ice and coal until around 1915.  In subsequent years, two Polar Ice mules — Kate and Queen — attained local celebrity status when they were featured in the company’s advertisements. Their retirement from active service in 1928 was celebrated with a parade through downtown Indianapolis and the presentation of new blankets embroidered with each mule’s names. 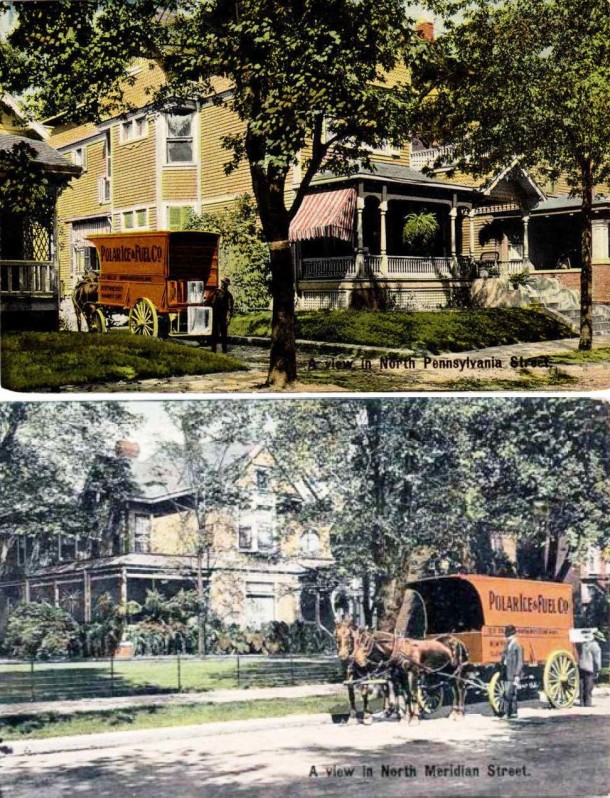 During his tenure as Chief Inspector of Weights and Measures, Wulfson did not limit his consumer-protection crusade to purchasers of ice.  He also ferreted out fraud and corruption in sales of lard, turkey, coal and numerous other items that were commonly sold by the pound.

He gained particular notoriety for taking on Standard Oil after a local housewife complained that she was being “short-weighted” in her deliveries of gasoline.  Donning a suit, he settled in an easy chair in the corner of Mrs. Florence Taylor’s kitchen as part of a trap to convince the unsuspecting delivery man that he was Mrs. Taylor’s husband.  When Mr. Taylor arrived home from work, he was startled to discover an impersonator occupying his favorite chair, but agreed to cooperate with the scheme.

The jig was up when the gasoline truck arrived a few hours later. Wulfson hid his face behind a large book as Mrs. Taylor took receipt of what the delivery man asserted were four gallons of oil.

“You’re pinched,” Wulfson shouted as he threw down his book and leaped to the middle of the room. Then, “perilously risking his clothing and with high disregard for his personal appearance,”  Wulfson measured the gasoline and found it to be three pints short.

The plot thickened the next day in court when Wulfson alleged that the powerful Standard Oil trust tried to blow him up with a gasoline bomb. The basis for Wulfson’s explosive allegation: the delivery man had asked Wulfson for a match – even though Wulfson could see no evidence that the man had a cigar or a pipe. 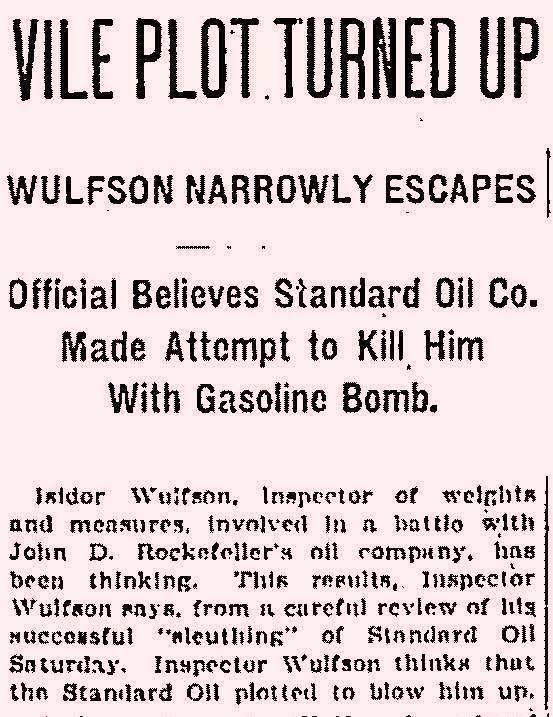 Wulfson’s stint as Chief Inspector came to an end in 1914 when Joseph Bell was elected mayor of Indianapolis.  But by then, he was duly authorized to practice law and had his career as a lawyer to fall back on.

Under a former provision of the Indiana Constitution, any voter “of good moral character” was eligible to practice as an attorney.  In 1911 Wulfson applied for admission to the Indiana bar despite the lack of any legal training.  Not surprisingly, Wulfson’s petition was vigorously opposed by the Indianapolis Bar Association, which questioned his knowledge of the law during a jury trial on Wulfson’s eligibility to practice law. Following nearly six hours of deliberation, the jury returned a verdict in favor of Wulfson.

Wulfson’s name largely dropped from the headlines after he left the Weights and Measures office in 1914, cropping up from time to time for a particularly colorful defense of a murder defendant or for an entertaining stint as a judge pro tem.  He was still practicing law in 1930 when he was listed as an attorney in the city directory, and at some point even joined the same Bar Association that had once fought to bar him from the bar. 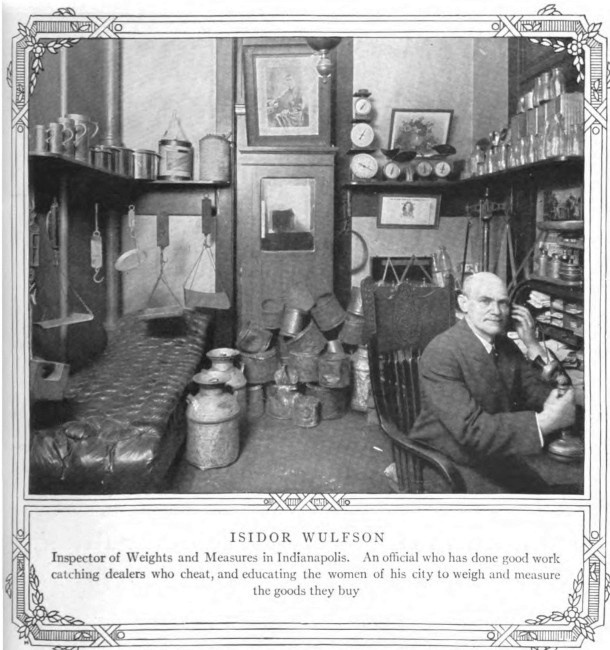 Born in Latvia, Wulfson joined an opera troupe as a child progidy at the age of eight and traveled throughout Europe and the U.S., appearing in various leading roles. Bitten by the political bug, he hopped off the road to stardom in 1888 and hit the campaign trail for Benjamin Harrison, delivering campaign speeches in German, Russian, Yiddish and English. After that, he got married, became a cigar maker in Carrollton, Indiana, did some more campaign work, became a wholesale merchant in Evansville, and finally wound up in a hospital in Indianapolis where he would meet then-Mayor Charles Bookwalter. The rest, as they say, is history.

Although there’s no dispute that Wulfson was both an intriquing character and an effective public servant,  you may be wondering why I titled this post “The Most Interesting Man in the World.” In 1911, the American Magazine included Wulfson in an article featuring some of the most interesting people in America.  I decided to take it up a notch and dub him the most interesting man in the world.  It’s exactly the sort of hyperbole that Wulfson would have heartily endorsed.