Daisy McKay was only 16 years old when her parents broke ground on a fine brick mansion at the corner of 13th and Broadway. The new Statehouse was under construction at the time, and her father purchased quarter-sawn oak woodwork from the same firm that furnished it for the capitol, along with quantities of cherry and black walnut.

Then Horace McKay did something a little unusual with the expensive wood. He gave his teenage daughter a knife and chisel and let her have at it.

The result was extraordinary. 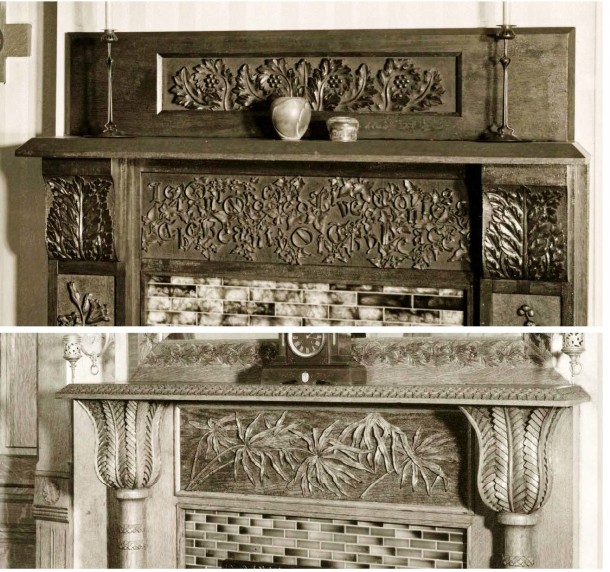 But Daisy was not an ordinary teenager, and Horace McKay was certainly not an ordinary 19th century father. A fervent believer in equal rights for women, Horace had married fellow progressive Martha Nicholson in 1864, while serving as Captain of the 15th U.S. Colored Troops. Together they founded the Indianapolis Suffrage Society in 1872, although years later Martha would say that Horace was really the driving force behind the couple’s work to allow women to vote.

“I do not deserve any credit for taking up the issue, for my husband was an ardent supporter of woman suffrage,” Martha McKay told The Indianapolis News in 1919. “There were more men than women interested in suffrage fifty years ago. Conservative women, when asked for their sentiment on the subject, often said, ‘I like to have my husband in favor.'”

In fact, although she had spent much of her life advancing the role of women in civic and political life, Martha herself favored restricted suffrage, with potential female voters required to pass education and moral tests before they could cast a ballot.

Originally from Ohio, Horace and Martha McKay moved to Indianapolis shortly after the Civil War and became friends with Ovid Butler, who shared their progressive views about women’s rights. Butler had been instrumental in establishing North Western Christian University (later renamed Butler University), which was the first university in the United States to admit women on an equal basis as men.  When Butler platted his farmland in the late 1860s, the McKays bought a corner lot at 13th and Broadway, and waited for the right time to build a house.

As their family grew, the couple’s influence in the city’s intellectual, civic, religious, and political circles also continued to expand.  Cornelia McKay – called Daisy by her friends and family — was the second of the couple’s three daughters and was exposed at an early age to leaders in the suffrage movement. Thus, it was no surprise that when Daisy saw a wood carving exhibition at the Cincinnati art museum at age 10, she did not hesitate to pick up a chisel and embrace an art form more typically favored by young men. 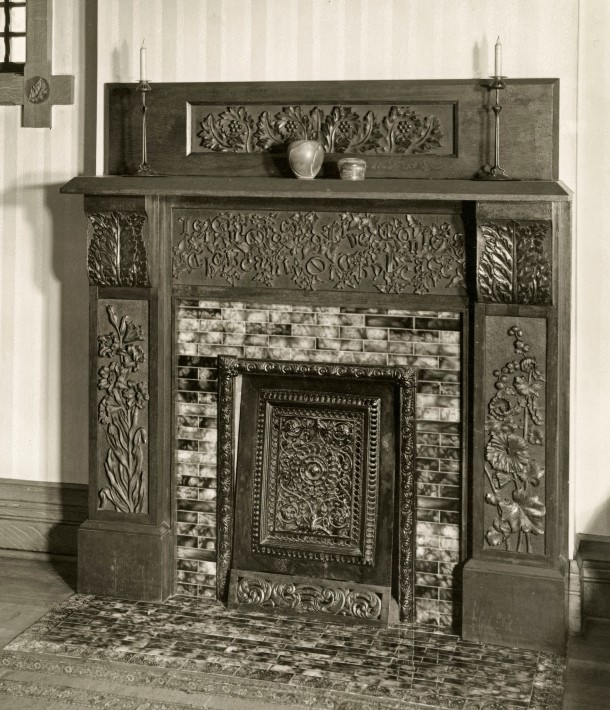 The cherry mantel in the parlor of the McKay house. Daisy also carved the rosette shown in the corner of the window. Photograph by Bass Photo Co, Indiana Historical Society, M1078

Daisy’s love of wood carving remained strong for the remainder of her life,  which tragically ended at age 23. When she died on August 12, 1893 after a long illness, she left behind her grieving parents and sisters, along with three remarkable mantels that she had carved for their home on Broadway.

Daisy’s death was a deep blow to the close-knit family. In the year following her death, the McKays published a memorial book featuring tributes from friends and prints of many of Daisy’s sketches and watercolors.  Family friends James Whitcomb Riley and Meredith Nicholson penned poems in honor of the young artist, with Nicholson’s poem honing in on the marks that Daisy had left with her carving knife.

And when her chisel carved a leaf,
Or clusters, in the sullen wood,
It was as though she understood,
Secrets beyond our crude belief.

As if she saw naught can prevent,
The fading of the things of earth,
And sought how best their grace and worth,
Might be made strong and permanent. 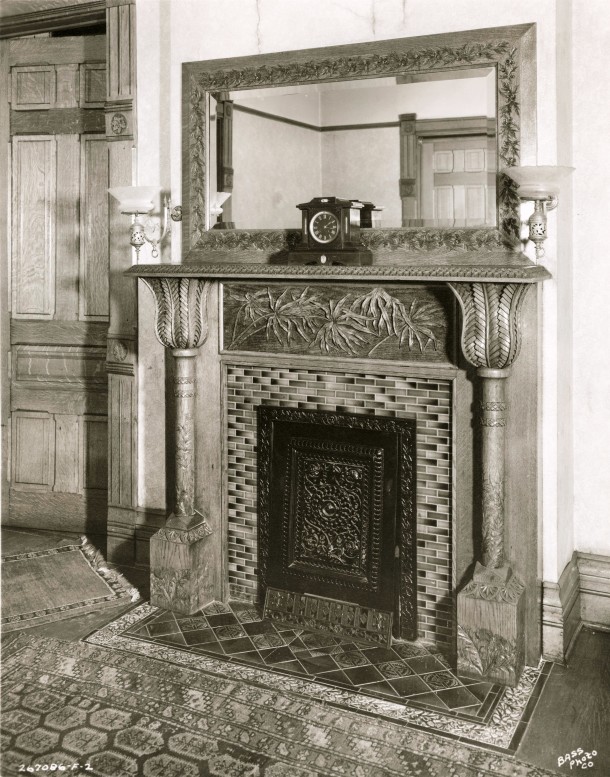 Horace McKay died in 1914, at the age of 72.  Martha remained in the house for 20 more years, surrounded by the flowers and ferns carved by the hand of her long-dead Daisy.  But by then, most of the McKay family’s long-time friends had either died or moved on.  In November 1919, The Indianapolis Star noted that the quiet neighborhood once known as College Corner was “beginning to change,” although the McKay home continued to retain “its tradition of high-thinking and self cultivation.”

City directories show that after Martha McKay died in 1934, the house was vacant for long periods until 1941, when it was turned into a rooming house. After most of the adjacent houses were demolished to make way for the interstate, the home’s condition deteriorated.   Finally in the late 1970s, the utilities were turned off, and the house was boarded up.

Over the next 40 years, the once-gracious porches fell victim to decay.  Vandals invaded the vacant home, stripping away light fixtures and other potential valuables.  And at some point, the house that Daisy helped build was literally dismantled. 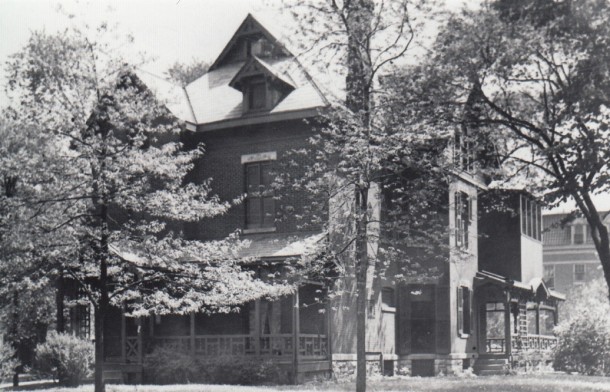 Photo from the IHPC archives, showing the McKay home with its porches still intact.

In recent years, the McKay house has changed hands several times after its new owners discovered they lacked either the resources or the expertise to tackle the necessary restoration. But earlier this year, the long-vacant landmark was purchased by Kyle and Megan Robinson. As the co-founder of a development and construction company, Robinson is familiar with the challenges of restoring an old building.

A new roof was installed in early June, and the structure has been stabilized. Interior work is now underway, although the boards are expected to remain on the windows for a few more months as the restoration progresses. If all goes as planned, Kyle, Megan and their 3-year-old son, Truman, will move into the McKay house in October. 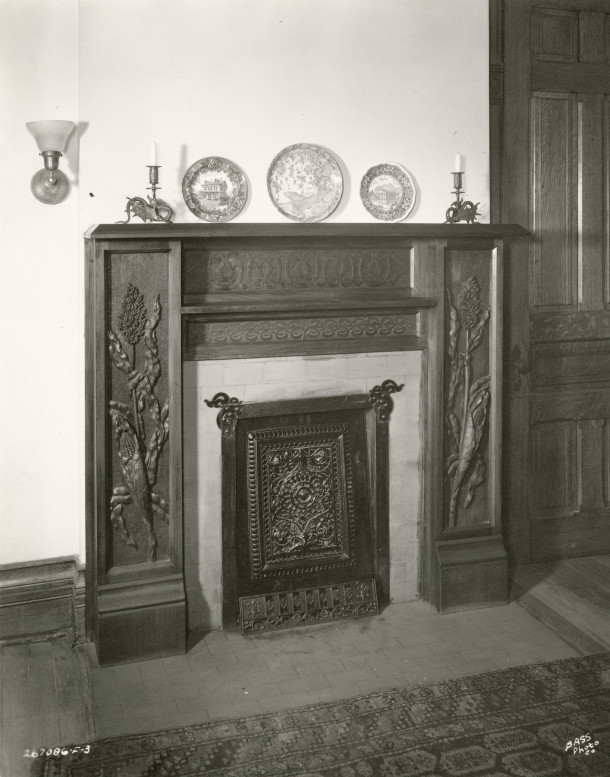 Kyle Robinson reports that the McKay house is in surprising good shape, despite years of neglect.  Most of the home’s original woodwork remains intact.  The grand staircase still stands, and intricate rosettes that were hand-carved by Daisy grace doorways throughout the house. The home even has most of its original doors.  But the mantels that were hand-carved by Daisy have long-since vanished.

I am intrigued and a little saddened by the mystery of the missing mantels. Perhaps Daisy’s handiwork was rescued by her sister Helen after their mother died and before the house was sold.  An artist herself, Helen was married to T. C. Steele’s son, Brandt.  She would have appreciated the intricately carved mantels for both their beauty and their sentimental value.

It’s also possible that the mantels were removed during the 40 years when the McKay’s home served as a rooming house, and were sold to buyers who remain unaware of the story behind the carvings.

I know it’s unrealistic to think that the current owners would remove Daisy’s magnificent mantels from their own homes and return them to the house on Broadway.  But wouldn’t it be nice if they knew the history of the mantels and from time-to-time thought of the young girl who carved them?

So I have one question for HI readers: Have you seen these mantels?

Let me know. And thanks for reading HI.

For more information about Cornelia “Daisy” McKay and her family, check out the Brandt & Helen McKay Steele collection at the Indiana Historical Society. Among the many treasures in the collection are Daisy’s journals, letters from her friends, photographs of Daisy from throughout her short life, and her childhood autograph album signed by abolitionist Frederick Douglass.