Before the days of Mapquest and GPS, travelers could usually tell if they were headed in the right direction by looking at the street signs. Lafayette Road led to Lafayette, Brookville Road to Brookville, and Zionsville Road to Zionsville, Granted, no one ever got to Georgia by walking down Georgia Street, but Market Street has always led to City Market and Senate Avenue still ends in front of the Senate chambers.

But like any city of a certain age, Indianapolis has a number of streets that lead to places that no longer exist. For example, College Avenue lost its namesake in the 1870s, when Northwestern Christian University outgrew its original site at 13th and College and moved to Irvington. Fifty years later, Irvington was left with a University Avenue but no university after the college – now called Butler – relocated to its present site at Fairview Park.

In case you’re wondering whether University Park is another ghost of Butlers-past, the answer is… sort of. Northwestern Christian University was one of several different educational institutions that unsuccessfully vied for the rights to the property now called University Park. 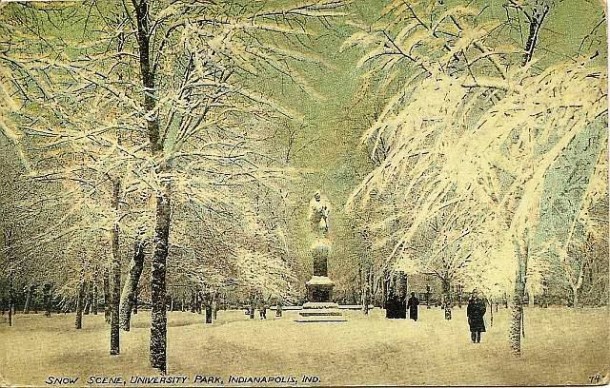 Alexander Ralston’s role in selecting Square 25 as the site for a university is an urban legend in Indianapolis. The fact is, it was an act of the legislature, and not of Ralston, that gave the city a University Park uncluttered by an actual university. As originally platted by Ralston in 1821, Square 25 was broken into 12 different lots with alleys running both north-south and east-west. Unfortunately, the swamp-like conditions of the pioneer era rendered property in downtown Indianapolis less desirable in 1821 as it is today, and many of the lots in the Mile Square either went unsold or were forfeited later by remorseful buyers. In order to put some of the unused property to good use, the General Assembly adopted a law in 1827 that vacated the alleys in Squares 22 and 25 and set aside the land to be used, respectively, as a Lunatic Asylum and as a State University. Square 25 was then renamed University Square. 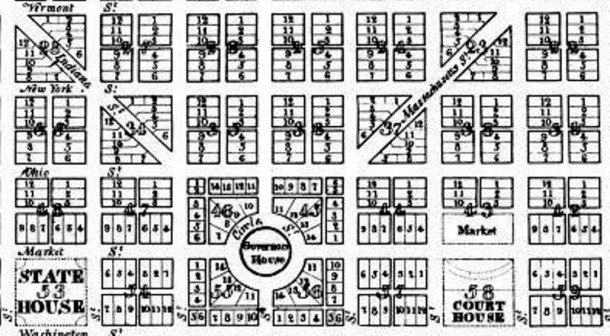 Like a bride left at the altar, University Square sat empty for another five years waiting for a state university that never showed up. Not wanting the land to go to waste, the legislature in 1832 agreed to lease the square to the trustees of the Marion County Seminary. Under the terms of the 30-year lease, the seminary was to be built on either the southeast or southwest corner of the square. The trustees had the option to buy the half-acre where the seminary stood in the event that the remainder of the square was needed for a state university.

The Marion County Seminary (pictured below) opened its doors to the young men of Indianapolis on September 1, 1834. Built for a cost of $783, the seminary was two stories high, fronting New York Street. In the early days, the lower floor did double-duty on Sundays as a church for several different congregations, including the newly established Second Presbyterian Church with Henry Ward Beecher at the pulpit.

The school ran through a succession of headmasters over the next decade, and finally closed around 1844. The building stood vacant for much of the next few years, until it was reopened in 1853 as the city’s first High School. Sadly, the High School on University Square lasted for only five years. In 1859, Indianapolis was forced to shut down its only high school and cut the school year in half for the lower grades after the Supreme Court ruled that property taxes could not be used to pay for school operations.

The seminary building was torn down in 1860. The only hint that a school ever operated in University Square is a nearly illegible limestone tablet embedded on the site of the old seminary by some of its grateful graduates. 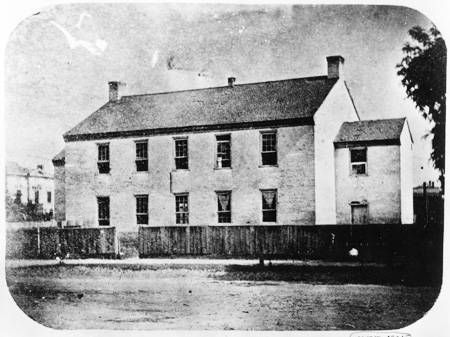 Not wanting the remaining part of the square to sit idle during the Seminary’s lease, in 1837 the legislature tried to lease the northwest corner to the Lutheran Church. After the religious purpose was deemed unsuitable for the property, the legislature made another fruitless attempt to lease the property in 1838, only this time to a Female Seminary. In 1850, the governor was authorized to sell an acre of University Square to Indiana Asbury University (now DePauw) for its medical school. That sale fell through after the appraised value of $3,566 was deemed too high.

The unsuccessful efforts to establish a university on University Square continued throughout the 1850s. In 1859, legislation was introduced to allow Northwestern Christian University to build a law school and a medical school on the site. Other Indianapolis-area lawmakers sought to use the site for a proposed state Normal School which was eventually built in Terre Haute. Meanwhile, the site was also considered as the location for a “female department” for Indiana University.

The summer before the Seminary was demolished, an entrepreneur named J.B. Perrine enclosed a large portion of the square with a high fence, covered it with a shed, and dubbed it “The Coliseum.” With seating for nearly 20,000 people, the Coliseum opened on July 4, 1860 with a military parade, a concert, a balloon ascension, and a magnificent fireworks display. The ambitious enterprise proved to be too large for the square, however, and by September both the shed and the seminary had been demolished.

Without a university to fill its space, the open square proved useful during the Civil War, when it was used as a drill ground for the 19th Regular U.S. Infantry. In 1863, with the threat of Morgan’s Raid looming in southern Indiana, University Square was called into service again as a parade ground for the Home Guard.

After the Civil War ended, another battle between the north and south was played out over the fate of University Square. Despite the square’s location in the center of Indianapolis, residents of Bloomington now believed that the land belonged to them and should be sold at auction with the proceeds benefiting Indiana University. The city of Indianapolis understandably took umbrage at this invasion from the south.

The city gained control of the land, and the affluent residents who lived in adjacent homes began eyeing the open site for a park. A crop of oats was planted as cover for establishing grass, and the Council spent $750 to enclose the entire area with a handsome iron fence. This brazen act on the part of Indianapolis to mark its territory enraged Bloomington residents, who took their case to the legislature. Confronted with the two warring factions, the legislature opted to dodge the immediate bullet by assigning the thorny issue to a special study committee. 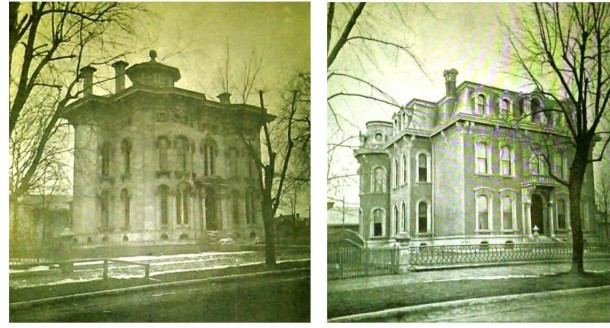 Pictured above are the homes of Fredrick Fanley and Albert Fletcher. These homes, which were located in the 400 block of North Meridian, are an example of the “palatial residences” built in the vicinity of University park.

The Committee on Education finalized its recommendations on the fate of University Square in 1867. The majority report called for the land to be reserved until such time as it was needed for a state university. The minority reported countered that the Indiana Constitution required only one state university and that university already was located in Bloomington. Since a second state university in Indianapolis had never been contemplated, the proponents argued, the land should be sold with the proceeds used to build an agriculture school in Bloomington.

Brevier’s Legislative Reports from 1867, which are published online by the Maurer School of Law at Indiana University, provide a blow-by-blow account of the fight over the future of University Square that was waged at the Statehouse over the next few months.

Bloomington-area lawmakers asserted that Indianapolis legislators were being disingenuous when they claimed that the funds expended to landscape and fence the property were simply aimed at making University Square a more desirable campus for the eventual state university. Instead, these amenities had been added at the behest of adjacent landowners, who wanted a beautiful park adjoining their palatial homes.

Sen. Horatio Newcomb, who also edited the Indianapolis Journal, rose to the defense of the capital city and its residents, alleging that Indiana University proponents were “the very professors of lobbying” and could teach the rest of the state how to lobby the legislature. Newcomb added that everyone knew University Square was not desirable as a park because it was not large enough. When Indianapolis wanted a park, he told his fellow lawmakers, the city would be able to command the means to get it. Until such time as the property was occupied for its intended purpose, he supposed this square would remain as it is – a walk for nurses and children.

The legislature finally punted the issue, and authorized the city to make a park of University Square until such time as a better use could be found for it. That was 145 years ago. The park was eventually redesigned by landscape architect George Kessler, who incorporated it into his citywide plan for the Indianapolis parks system. 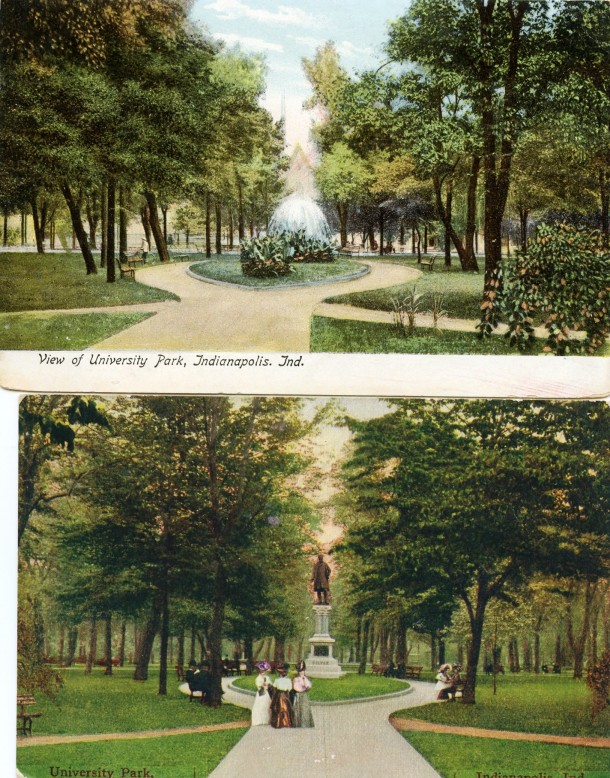