Indianapolis Collected contributor Libby Cierzniak is traveling back to Indianapolis today from a short vacation in eastern Pennsylvania, so we’re reposting an article she wrote in early 2012 about pioneer leader James Blake, who made the same trip himself in 1821 under somewhat more grueling conditions.

It was the sort of eBay listing that I easily could have missed. “Drawing of an old house,” the seller posted, along with a photo of a ramshackle cabin that looked like a place the Beverly Hillbillies might have called home in their less prosperous days.

But then I saw the handwritten inscription on the back of the frame. 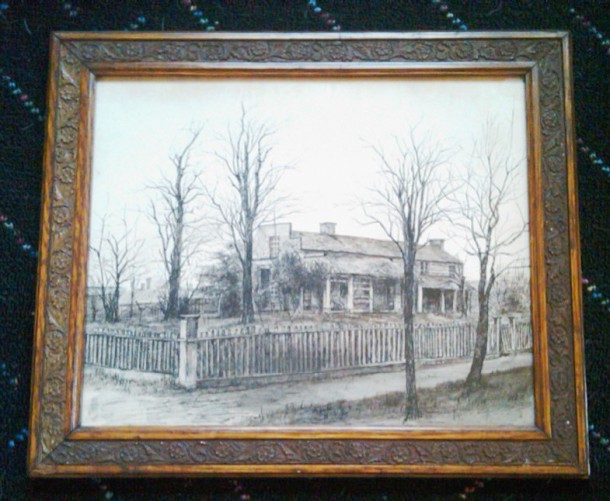 At the risk of losing any credibility I might enjoy as an amateur historian, I have an admission to make.  When I spotted the drawing on eBay about 10 years ago, I had never heard of James Blake and didn’t even know that Capitol Avenue was once called Tennessee Street.  But the picture of his house did look vaguely familiar. So I decided to do a little research to see if the sketch was worth the $50 starting bid set by the seller.

It’s important to note that the operative word here is “little.”  At the time, I only owned a couple of books on Indianapolis history, including Volume 1 of Jacob Piatt Dunn’s 1910 history of Indianapolis.  After leafing through Dunn’s book, I found the photo I was looking for on page 390. I also found a biography of Blake that helped me understand why his house would merit a full-page photo in Dunn’s book.

Five days later, I bought the sketch for $50.  I was the only bidder. 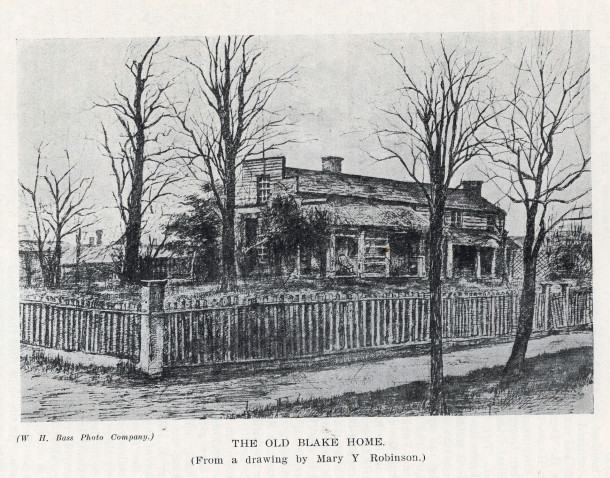 Over the past decade as I’ve learned about James Blake’s role in our city’s history, I’m puzzled why other history buffs weren’t clamoring for the opportunity to buy a pencil sketch of the house that he built for his bride in the late 1820s. It seems like Blake has faded into relative obscurity over the years, at least when compared to his friend Calvin Fletcher, who has been immortalized by both a marble bust in the Statehouse and a coffee shop on Virginia Avenue.  But that would probably be alright with Blake.  As historian Berry Sulgrove wrote in 1884:

“If Mr. Blake had pursued his own advantage with half the zeal he devoted to the service of others and the good of the city, he might easily have counted his wealth by millions. His ambition to become a useful citizen and a public benefactor outweighed all other considerations. He was not politically ambitious, and never held public office other than that of county commissioner. His desire for power never seemed to extend beyond the command of a Sunday school procession or the presidency of a charitable meeting.” 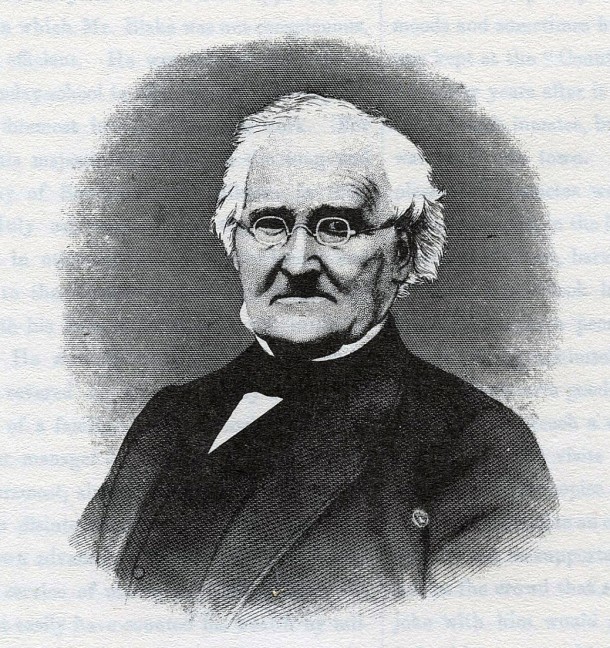 James Blake rode into town on horseback on July 25, 1821. Over the course of the next decade, he brought the first piano to Indianapolis, built the first plaster and frame house, and introduced his fellow townspeople to oysters, a delicacy which some of the pioneers indelicately compared to a “nasal excretion.”

In the following years, he opened the first mill, started the first charity, organized the first 4th of July parade, and supervised construction of the first Statehouse.

When the entire population of the settlement was stricken with a malaria-like illness during the harsh winter of 1821, Blake made daily rounds to each settler’s cabin with food and water, even though he was suffering himself.  That same winter, when four traveling rogues from Kentucky drank a barrel of whiskey and started terrorizing the citizenry, Blake volunteered to take on the leader while the other men handled the rest.

When it became apparent after the Christmas Eve incident that the town needed a jail, Blake traveled to Corydon to convince the legislature to carve out a big square of then-Delaware County and create a new county – Marion.

In the earliest days of the city, he shared his large personal library with his fellow settlers and taught the ABCs to their children during Sunday school classes in Caleb Scudder’s workshop. As Indianapolis grew, he became a tireless advocate for common schools, serving on a blue-ribbon panel that called for a school tax, a superintendent, qualified teachers, and free public education.

In short, James Blake was the kind of guy you would want to have around if you were building a city from scratch.

As historian Berry Sulgrove wrote, “[James Blake’s] history for fifty years was the history of Indianapolis, and no citizen has ever been more closely identified with the rise and progress of the city and its philanthropic and benevolent institutions than he.” 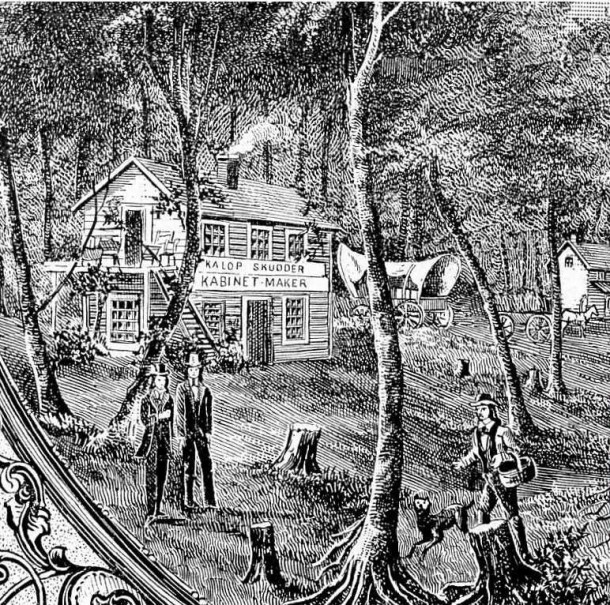 James Blake taught Sunday School classes in Caleb Scudder’s workshop on West Washington Street, approximately where the Westin stands today. Although the sketch above was drawn many years after the frame building had been moved to Delaware Street, the odd spelling on the sign is accurate and reflects the handiwork of the city’s first sign-painter, an immigrant from Germany.

Still, he had his share of failures, but these were mostly because the rest of the world hadn’t caught up with his vision for Indianapolis. In 1828, he joined with Nicholas McCarty and James Ray to erect a five-story building on the banks of the White River, complete with a steam-powered grist mill, saw mill and woolen mill.  The enterprise opened in 1832 and failed almost immediately because there was no easy way to bring raw materials to Indianapolis or get finished goods to market.  The mill was abandoned in 1835 and burned to the ground in 1847 – the same year that the railroad finally reached Indianapolis.

Blake’s efforts to organize a state exposition of agricultural products in Indianapolis also fell victim to bad timing. As president of the first state Agricultural Society, he organized a convention at the Statehouse in 1835 for the purpose of diffusing knowledge of, and interest in, agriculture.  The event fizzled, in large part because the means of transportation were still too difficult for people to bring their agricultural products to a fair.

Although Blake brought many important “firsts” to the city, Indianapolis already had at least one tavern when he and Samuel Henderson opened Washington Hall in 1823. Calvin Fletcher opined to his diary that he doubted the venture would be a success, but Blake and Henderson proved him wrong. Within a few years, the modest frame structure was replaced with a handsome brick building that quickly became the best-known hotel in Indiana.

Originally from Pennsylvania, Blake came to Indianapolis in 1821 because he heard there was money to be made by harvesting native ginseng and selling it the Chinese.  He built a small house on Alabama Street where the ginseng root was dried and purified, and then sent to Philadelphia for shipment to China. The business thrived until the supply dwindled. By the late 1830s, ginseng had all but disappeared from the Indianapolis area. But Blake remained.

Shortly after his arrival in Indianapolis, he built a “palatial” two-room plaster and frame house on Washington Street which he shared with Calvin Fletcher and his family.  When State Treasurer Samuel Merrill moved the State Capitol to Indianapolis in 1825, Blake moved out of his side of the house so Merrill and his young family could move in.  Sometime thereafter, he built his house on North Street, which at the time was the northernmost house in the city.

North Street had a special significance for Blake.  When Alexander Ralston completed his plat for the city of Indianapolis, Blake noticed something was missing. At Blake’s urging, the four boundary streets were added – North, South, East and West – because in his view, “fifty years later they will make a fine four mile drive around the city.”

Blake’s house was still standing in 1911 when Bass Photo took the photo above.  By 1918, however, the house had been demolished.

Calvin Fletcher’s grand-daughter, Laura Fletcher Hodges, reminisced about the Blake homestead in a 1918 address to the Indianapolis Women’s Club:

“The Blake homestead….was a delightful old place with its sheltered brick-paved porch, its Dutch gable and the riot of vines over all.  When I visited the homestead Mrs. Blake met me on the porch and taking me by the hand lead me into the quaint old parlor to see her cherished possession, the bridal gift of her husband, the antiquated piano, now stained and darkened with age.  It had been brought over the mountains from Baltimore in 1831 and was the first instrument of its kind in the new settlement.”

Blake died in 1870, just one year shy of the 50th anniversary of the Ralston plan. At the time, his funeral was said to the largest ever held in the city. 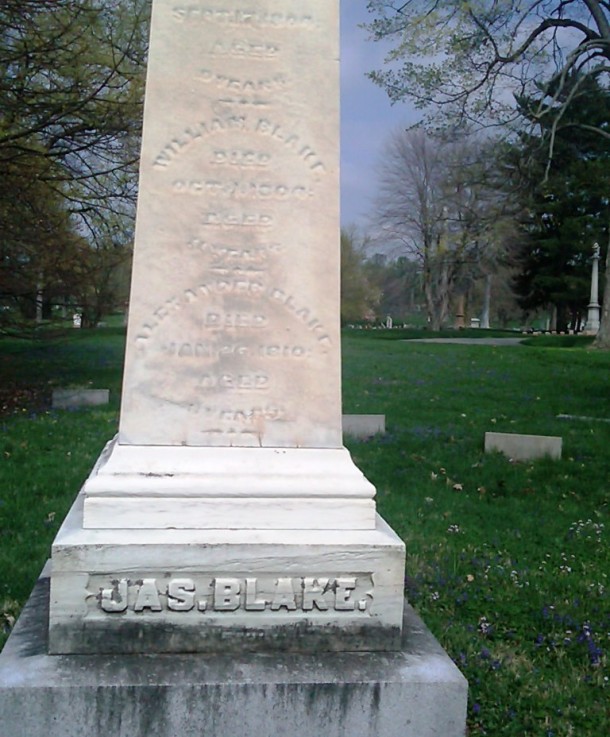