Indianapolis Collected: The Ravages of the Road

“But automobiles have come, and they bring a greater change in our life than most of us suspect. They are here, and almost all things are going to be different because of what they bring.”

Novelist Booth Tarkington was living at the northwest corner of 11th and Pennsylvania streets when he wrote these words, in the red brick house where he grew up.  The year was 1919, and although “The Magnificent Ambersons” centered around the changes to downtown Indianapolis wrought by the advent of the automobile, it’s doubtful that even Tarkington could imagine the degree of change that was coming down the road.

Within a few years, Tarkington would move north to 4270 N. Meridian. His childhood home at 1100 Pennsylvania would turn into a boarding house, with a battered “Rooms to Let” sign posted in the yard.  The sunny south porch where family friend James Whitcomb Riley wrote “Little Orphan Annie” would be demolished, followed later by the rest of the Tarkington house.

The neighborhood that served as the inspiration for Tarkington’s charming “Penrod” stories would also change, as its remaining residents fled to the suburbs. Tall apartment buildings would replace single family homes, a donut shop would open on the lawn where Tarkington played as a boy, and a used car lot and auto garage would spring up across the street, next door to the elegant mansion built in 1873 by the youngest son of pioneer leader Calvin Fletcher.

And then in 1969,  the entire 1100 block of Pennsylvania Street where Tarkington roamed as a child would be covered in concrete and turned into an interstate highway. 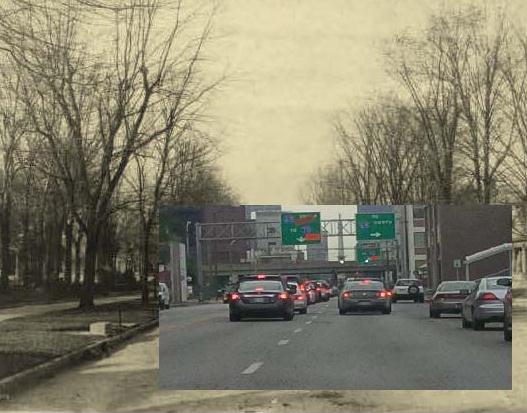 The recent closure of the I-65/I-70 split has made me wonder why we needed it in the first place.  I’m getting along just fine without an interstate highway in my backyard, although the occasional traffic back-ups on Meridian, Delaware and Pennsylvania streets have added as much as five extra minutes to my daily 10-minute commute.

This extra time on the road has given me to time to ponder about what was destroyed in the 1100 blocks of these streets when the interstate was built.  The handful of brick Victorian mansions in the 1000 and 1200 blocks of Pennsylvania and Delaware that survived the wrecking rampage of the 1960s give a hint of what might have remained had a different route been selected for the highway.

But on the  adjacent 1100 block of Meridian Street, the automobile had taken its toll years before construction began on the interstate highway through downtown. 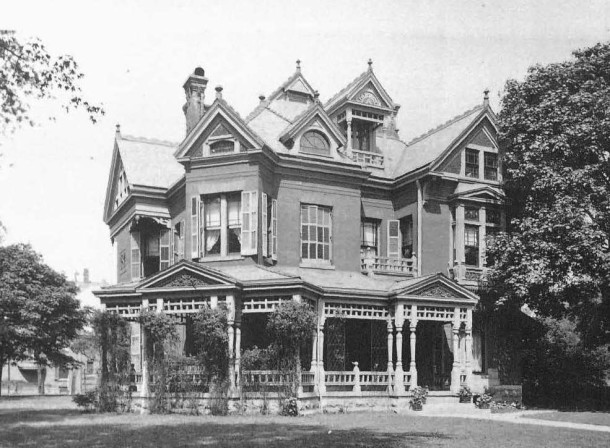 The first of the elegant Victorian mansions in the 1100 block of North Meridian to fall victim to the automobile was the home of Dr. Orange J. Runnels on the northwest corner of Meridian and 11th streets. In 1916, Runnels’ home was replaced by a four-story showroom for Cadillac and Dodge Brothers cars.  Covering nearly a quarter block, the E.W. Steinhart Building was the centerpiece of the 1917 auto show and was described by The Indianapolis Star as “perhaps the most beautiful automobile sales and service building in the middle West.” 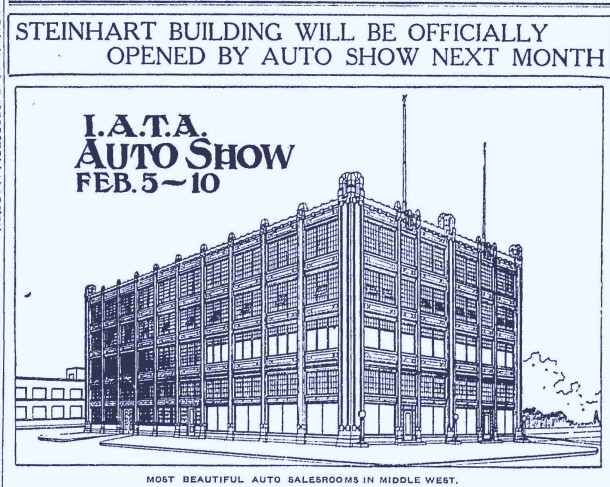 Not to be outdone, in 1920 the Lexington Motor Car company purchased the home of mining magnate Henry Knippenberg at 1142 Meridian Street as the site for its new showroom.  The four-story terra cotta building included both sales areas and a service station.

The 1916 Steinhart building survived until the arrival of the interstate, although the Cadillac cars that once graced its glossy showroom floors were long gone by then. Based on Sanborn maps from the 1960s, it appears that the former Lexington showroom was still standing as well, transformed into the Rough Notes printing company.  By the time both buildings were demolished to make way for the highway, they were half a century old and nearing landmark status themselves. 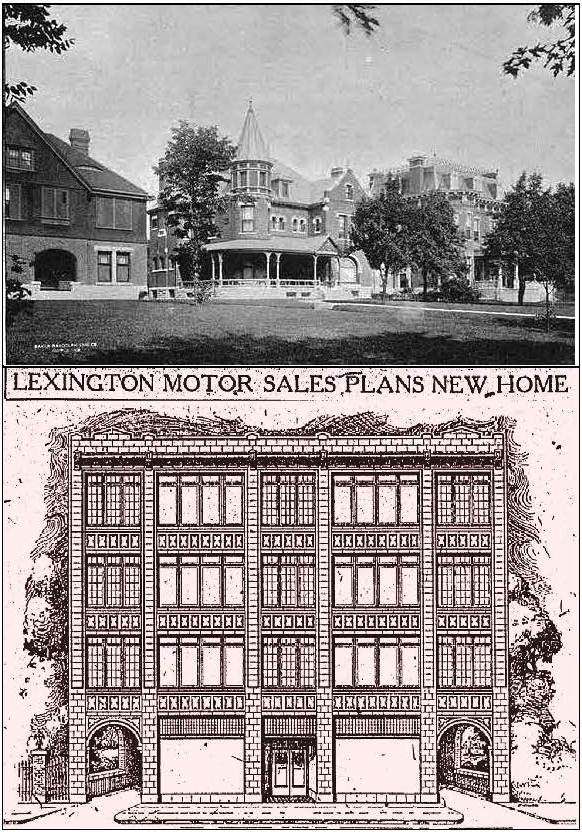 The Lexington Motor Car building at 1142 North Meridian replaced the gracious home of Henry C. Knippenberg, shown above center. The house on the immediate right is the home of John Carey, which served as the site of Children’s Museum for many years.

The conversion of Meridian Street from residential to commercial in the teens and ’20s rapidly changed the character of the 1100 block. In 1927, Children’s Museum founder Mary Carey offered to let the museum use her “city” home at 1150 North Meridian (shown below, bottom) until it could find a permanent location.  Immediately adjacent to the four-story Lexington Motor Car building, the Carey house served as the site of the Children’s Museum until 1946, when the museum was relocated to the Parry mansion at 30th and Meridian.  Two years later, the Carey house was leveled to make way for a parking lot.

With all of the shiny new cars zoooming up and down Meridian Street, there was a demand for commercial car washes.  On the east side of the 1100 block,  the 1870s home of former Indianapolis News owner John Holliday (shown below, top) was demolished in the mid-1930s and replaced by the Baxter One-Stop Auto Laundry. 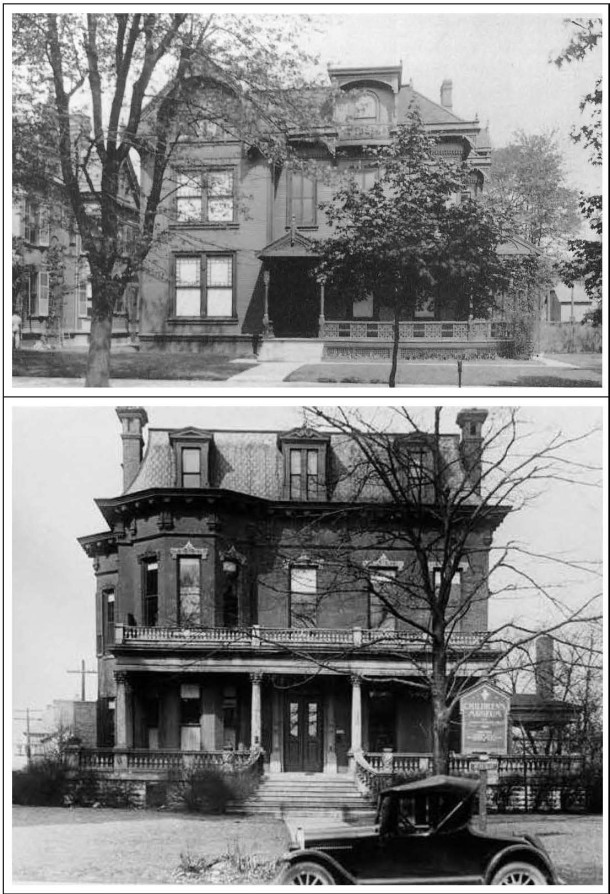 Ironically, the oldest house on the 1100 block of North Meridian was also the house that survived the longest.  In 1863, William Hubbard and his family moved from their home on the Governor’s Circle to a four-acre tract on the outskirts of town.  The property was subdivided by the 1890s, but the Hubbard house at 1126 North Meridian remained a family home until 1943, when the building was turned over the Indiana Chapter of the American Red Cross.  The Red Cross purchased the building in 1953 and remained there through the late 1960s. 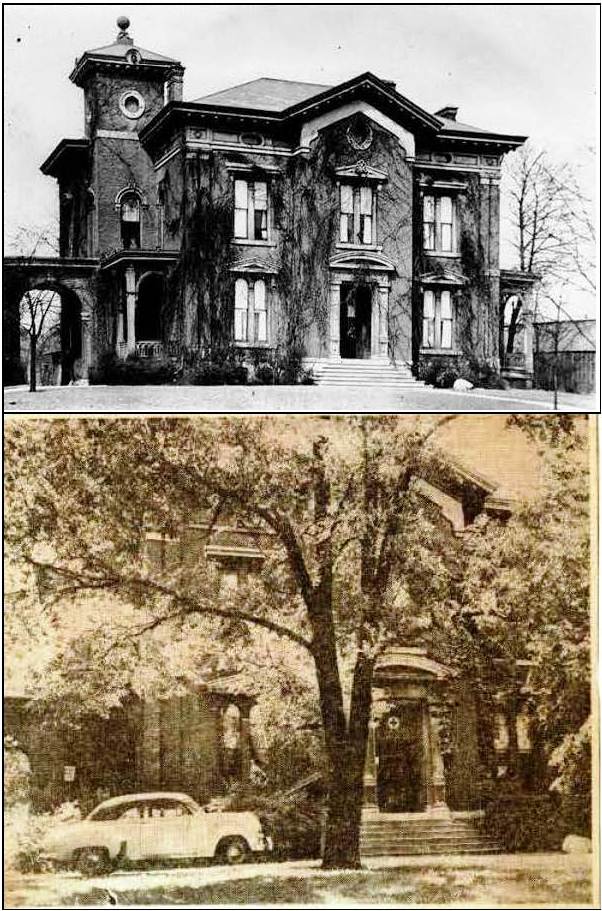 Although the 1100 block of Pennsylvania Street was generally safe from the onslaught of automobile-related businesses, the ease of travel to the north side of town fundamentally changed the character of the street where Tarkington played games as a child and wrote novels as an adult.  As one of Tarkington’s characters in “The Magnificent Ambersons” noted, “It isn’t the distance from the center of town that counts; it’s the time it takes to get there.”  Large single family homes were demolished to make way for tall apartment buildings, or repurposed as restaurants or office space. 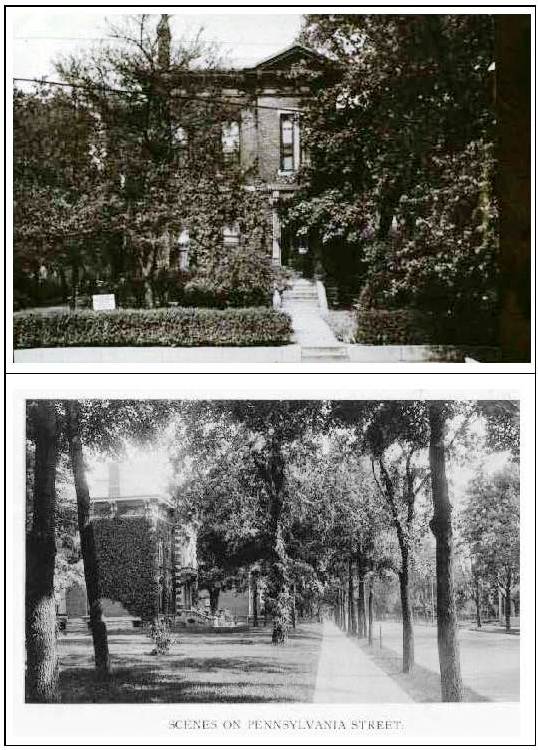 Shown above, the former Tarkington home at 1100 Pennsylvania. The small sign on the left advertises rooms to rent. Below, the 1100 block as it appeared in the early 1900s.

One of the most heart-wrenching examples of interstate road kill was the destruction of the majestic home at 1121 North Pennsylvania. Built in 1873 by Calvin Fletcher’s youngest son, Albert, the house had been converted to LaRue’s Supper Club by the 1960s, but still retained its fine exterior stone work and elegant interiors.  The house survived long enough to be pictured in Wilbur Peat’s 1962 book, “Indiana Houses of the 19th Century,” but was felled by interstate construction in the late 1960s.

Shown above from top, the Albert Fletcher home in its heyday at 1121 North Pennsylvania (Wilbur Peat Collection, Indiana Landmarks), the house as seen in the days before its demolition (photo by Ed O’Farrell), and the site of the home today.

The Fletcher-Wasson house at 1116 Delaware is another sad example of the ravages of the road.  Like its neighboring blocks to the west, the 1100 block of Delaware Street, shown below in the early 1900s, was changed by the advent of automobile travel.  The few houses that survived to the 1960s had long been converted for use by businesses or nonprofit organizations, including the brick mansion built by Calvin Fletcher’s son, Stephen.

Construction on the Fletcher house started in 1872 and was nearing completion two years later when Fletcher and his wife, Mary, traveled to Chicago to purchase furniture for their new home. She became ill on the trip and died before the house was finished.  The furniture which she had selected was placed in the house during her illness, but Fletcher never moved in.   The house was sold to prominent attorney John Butler in 1876.

Twenty years later, Hiram P. Wasson bought the house on the northwest corner of 11th and Delaware, where he and his wife raised their four children. After Mrs. Wasson died, the house was sold to two physicians for use as a private hospital.  In 1929, both the Fletcher-Wasson house and the neighboring Ayres home were purchased by Arthur Jordan and turned over to Butler University as a temporary home for its music department.  A 1929 article in The Indianapolis Star noted that the Fletcher-Wasson house would soon be demolished.

As luck would have it, however, the house at 1116 Delaware would become the second mansion constructed by one of Calvin Fletcher’s sons to almost fool the grim reaper of the road.  Like its sibling to the west, the Fletcher-Wasson house survived until the interstate arrived in 1969. 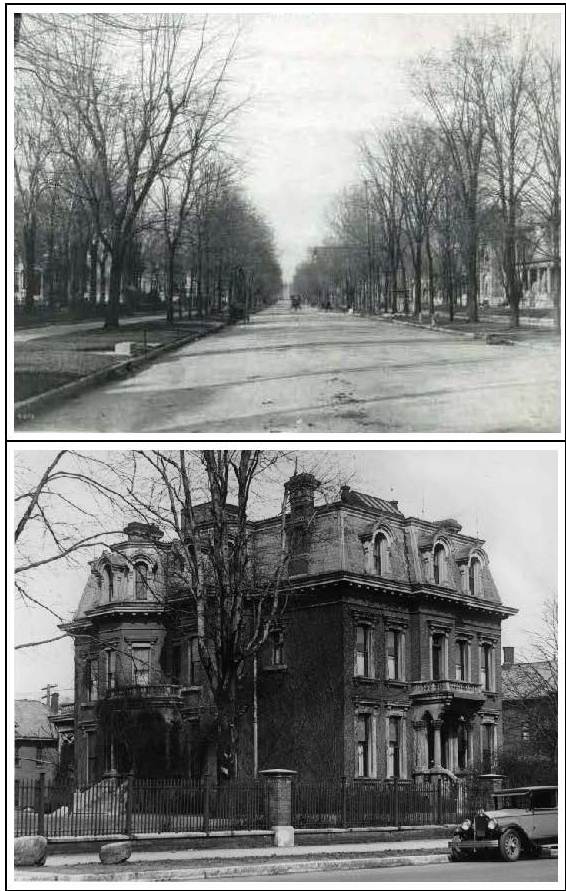 The 1100 block of Delaware Street, circa 1900, and the Fletcher-Wasson house at 1116 Delaware. (Wilbur Peat Collection, Indiana Landmarks)

In December 1965, the Indianapolis City Council approved a resolution that called for the I-65/I-70 split to be constructed as a depressed highway with overpasses that would allow most north-south streets to remain intact and could have spared some of the homes.  But by then, it was too late to stop the bulldozers. 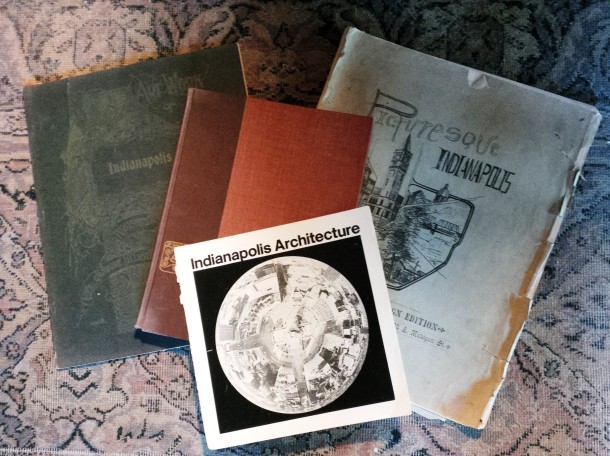 In case you’ve managed to read this far and are wondering what any of this has to do with objects that people collect, I first became interested in “lost” Indianapolis when I picked up a copy of “Indianapolis Architecture” for $5 at a used bookstore. Over the years, I was able to track down similarly affordable copies of Wilbur Peat’s “Indiana House of the 19th Century,” and several large folios of photos, including “Art Works of Indianapolis” (1906) and “Picturesque Indianapolis” (1890). Then I discovered that the early books and most of the photos are already available for free online at the Internet Archives.