Indianapolis Collected: The Secret in the Old Diary 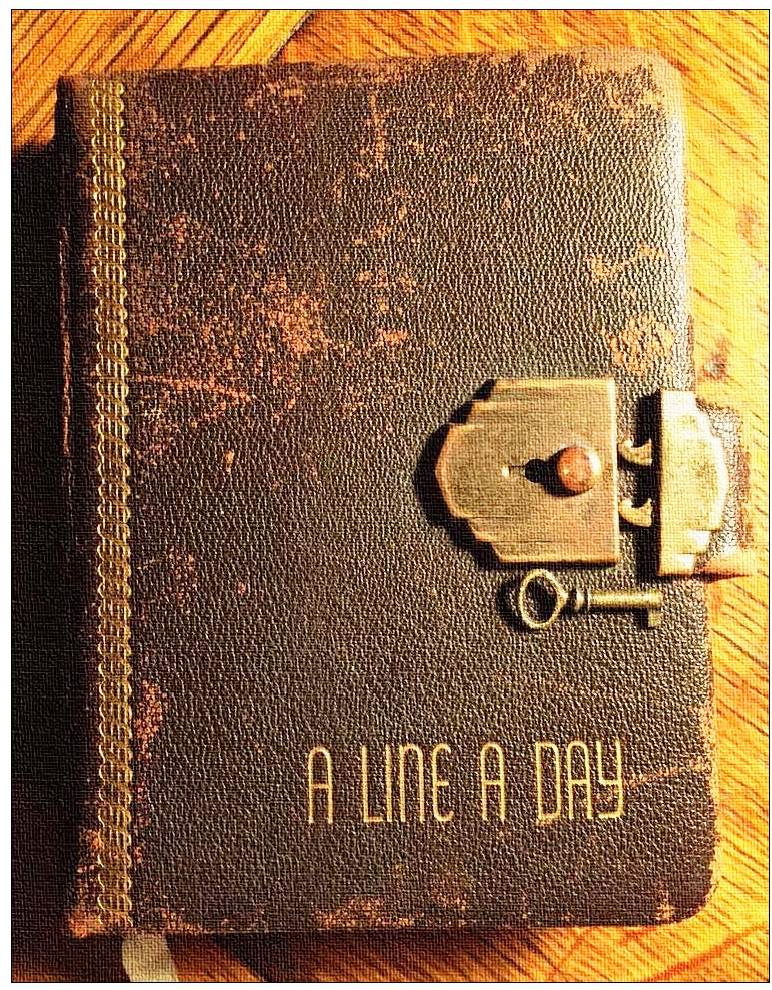 Charlotte Jane Anderson died 17 years ago.  A life-long Indianapolis resident, she left behind a cousin, a house, and a diary that chronicled every day of her life from January 1, 1947 to December 31, 1951.

About a year ago, a Chicago antique dealer purchased the diary at the Kane County Flea Market.  By then, the small leather book had changed hands several times and had traveled more than 200 miles from Indianapolis.

The dealer listed the diary for sale on ebay last month, noting that its original owner seemed to be from the Indianapolis area. He posted a photo of a single page that showed references to movies at the Circle Theater, a show at the Murat, and a dinner at the Log Cabin, a long-gone tavern at 38th and Keystone.

That was enough to hook me.  I could not resist the challenge of playing Nancy Drew and uncovering The Secret in the Old Diary. 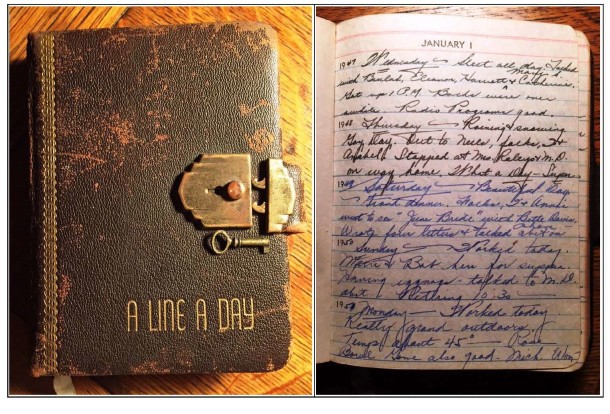 It didn’t really take much sleuthing to find the original owner of the diary, given the fact that Charlotte had written her name on the first page.  Still, she had failed to list any other identifying information in the spaces provided in the diary, such as her height, weight, eye color, home address or hat size.

I found her obituary online, which helped shed some light on this mysterious woman whose dark secrets I was sure I would soon discover. She was an accountant for nearly 40 years for the now-defunct Esterline-Angus Corporation in Speedway.  She apparently never married.  And she may have loved dogs, since her obituary stipulated that memorial contributions be made to the Humane Society. 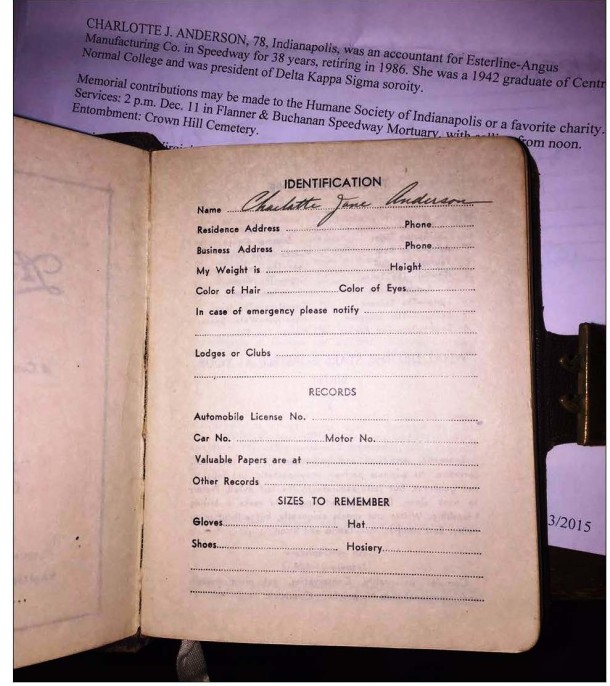 With that limited information in mind, I started poring over the spidery handwriting, only to find that the entries were similarly sparse.  There were no tear-soaked pages detailing a broken heart or a star-crossed love affair with her best friend’s husband. If she ever tucked a love letter or a faded photograph between the diary’s pages, these mementos were long since gone.

It was almost as if the words were written with the thought that someday someone like me would unlock the diary and share its secrets through a medium that would not exist for another 50 years. 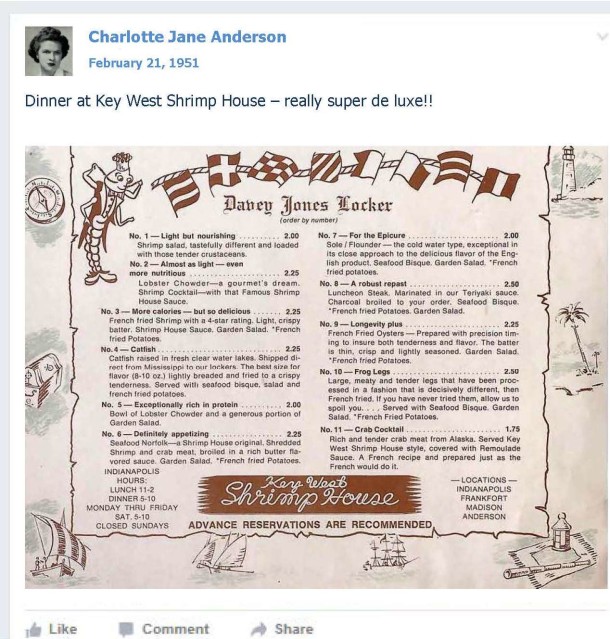 Charlotte was 26 years old when she started chronicling her life in the diary.  She had just turned 30 when she penned the last page. As far as I can tell from reading her diary, Charlotte Jane Anderson was a smart and happy young woman with loads of friends and a whirlwind social calendar. 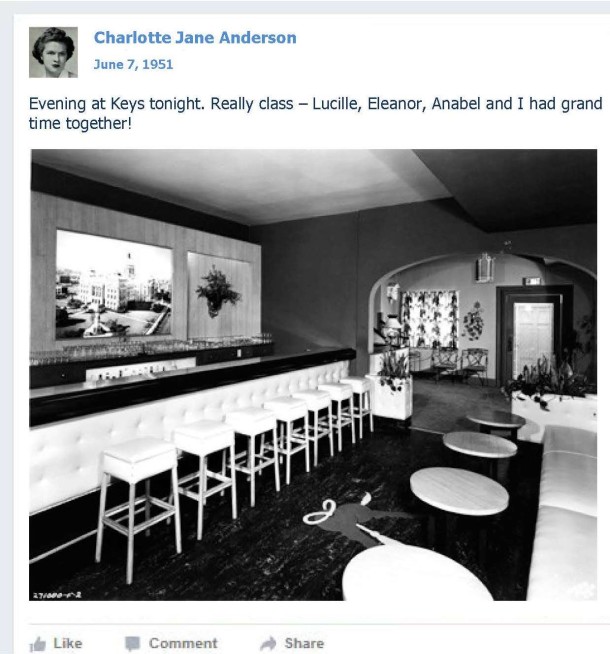 During the five years she kept the diary, Charlotte reported that she watched 288 movies, including classics such as Key Largo, Sunset Boulevard, and I was a Communist for the FBI.  In the hot summer months, she and her friends took in double-features during the day and occasionally saw a third movie in the evening.  They went to the Ritz at 3422 N. Illinois, Loew’s Palace at 35 N. Pennsylvania, the Esquire at 2961 N. Illinois, and the Zaring at 2741 Central. The magic of movies even brought Charlotte a little bit of Christmas in July 1947, when she went down to the Indiana Theater to see Miracle on 34th Street.

Then in mid-1949, WFBM-TV became the first commercial television station to sign on in Indianapolis. On September 22, 1951, Charlotte’s family bought a Sylvania TV set. “So wonderful having TV,” she wrote a few days later. “Still can’t believe it.”

After that, the trips to the movies became less frequent, replaced with evenings spent in the glow of the Sylvania. 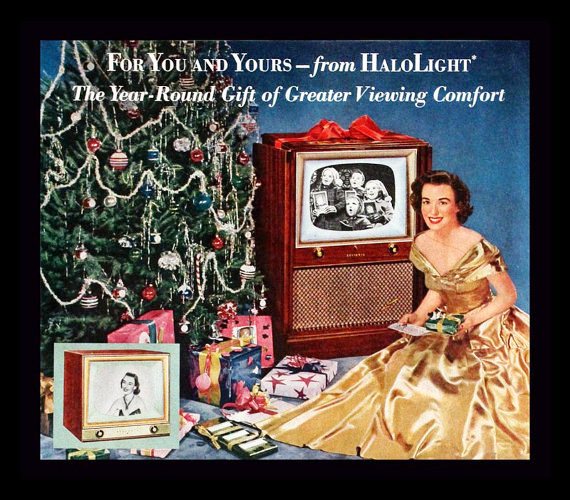 Charlotte lived with her mother and her stepfather, and seemed to have enough disposable income to go to Indianapolis Caps hockey games, eat out several times a week, golf with her girlfriends, and buy new dresses at Ayres. She and her friends grabbed barbecue at Bradley’s, ice cream at Martha Washington, cokes at the Tee Pee, and cocktails at the Keys.

On April 13, 1950, she and her chums from Esterline-Angus hosted a “bon voyage” dinner at LaRue’s for a co-worker who was sailing to Rome.  LaRue’s was a legendary supper club in an old mansion that was demolished to make way for the interstate. “Really a swell party indeed,” Charlotte wrote in her diary that evening. 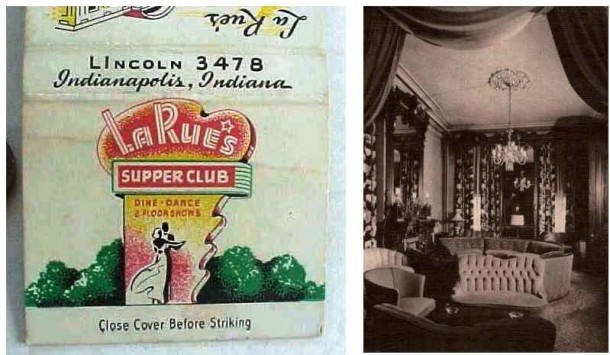 Charlotte Jane Anderson was born in Indianapolis on November 4, 1920 to Martha and Lawrence Anderson.  It’s unclear whether her mother was later divorced or widowed, but in 1930 Martha married Walter Dolmetsch. Martha was a bank teller and Walter was a salesman at various retail establishments, including L. Strauss and Hooks Drugs. In her diary, Charlotte affectionately called them “Mater” and “Pater.”

The family was living at 3017 N. Capitol when Charlotte graduated from Shortridge High School in 1938.  Within a few years, Walter and Martha bought the house next door. Charlotte would live there for the remainder of her life. 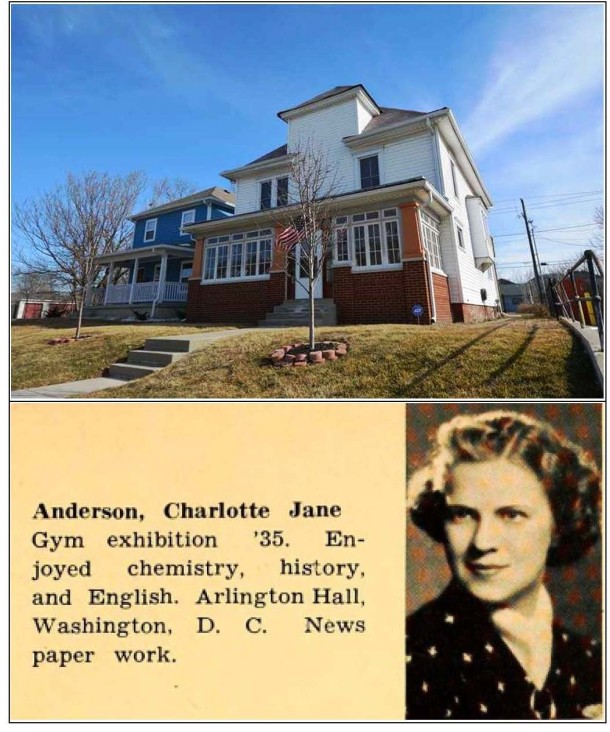 3017 and 3015 N. Capitol. (Photo courtesy of Everhart Studios.) According to the caption in Charlotte’s 1938 Shortridge yearbook photo, she planned to study journalism at Arlington Hall, a swanky all-girl junior college in Washington, D.C. Charlotte never matriculated, however, and instead spent four years at Central Normal College in Danville.

Because diaries with locks are designed to hold a person’s darkest secrets, I kept searching for details of Charlotte’s love life.  Charlotte was not only pretty and popular, but she was also smart and confident, elected president of her sorority at Central Normal College in Danville and vice president of the senior class.  Her diary mentioned so many friends that I actually had to create a spreadsheet to keep track of them. Yet the mentions of dates in her diary were few and far between. 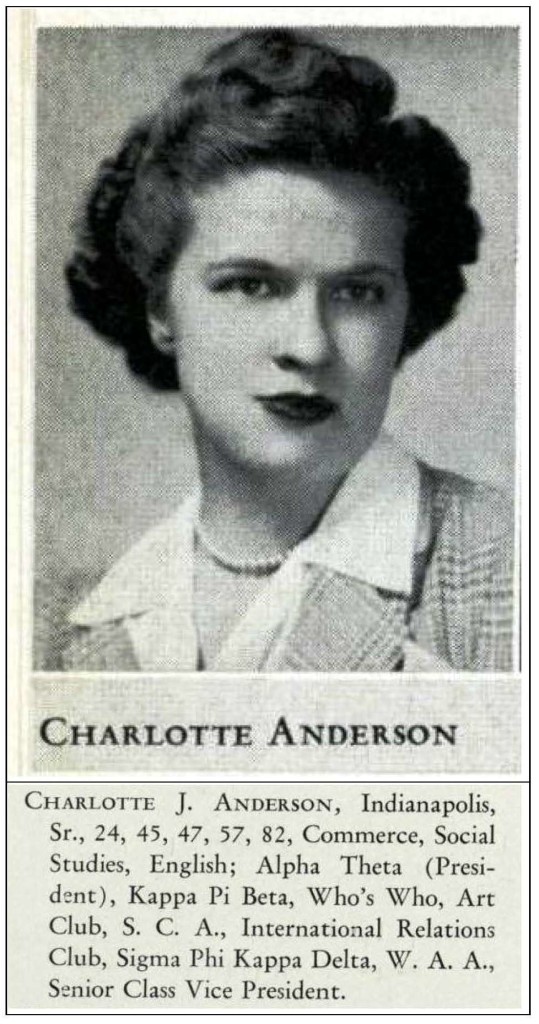 In 1947, she went out for a while with Bob Cradick, occupation unknown.  Their first date was March 11, when they saw a high school basketball game and had sandwiches at the Tee Pee. In October, they took advantage of the beautiful fall weather to drive down to Kentucky, stopping in Oakland City to eat fried chicken and visit with friends. It was, according to Charlotte, a “grand day.” That the last reference to Bob in the diary.

In January 1948, Charlotte hosted a group of friends at her house. “Had grand time all together,” she wrote. “Carl went home 2:30.”

A few days later, she and Carl went to Sam’s.  After that, Carl started popping up with frequency in the diary.  They went to dinner, to the movies, and to the Indiana Roof to dance to Guy Lombardo. Then at some point, Carl slipped from the pages as well. 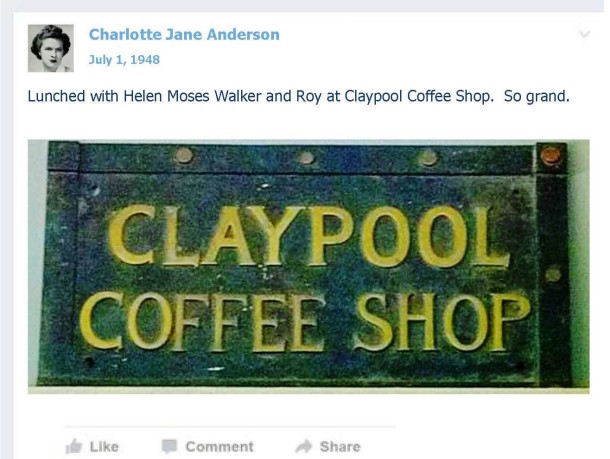 I have now read the diary twice and have grown very fond of the girl who I met on its yellowed pages.  Aside from one curious entry on April 11, 1949 -“Kathy out in California found dead in well. Busy day at the office indeed.” – the only secret I have found is what experts are now calling the secret to happiness.

For five straight years, Charlotte spent five minutes a day recalling and writing down a few things that happened each day that made her grateful. Her entries were peppered with “Wonderful,” “beautiful day,” “happy,” and “so grateful.” She loved her friends, her family, her dog, her car, and her life.

In her final entry on December 31, 1951, Charlotte Anderson wrote: 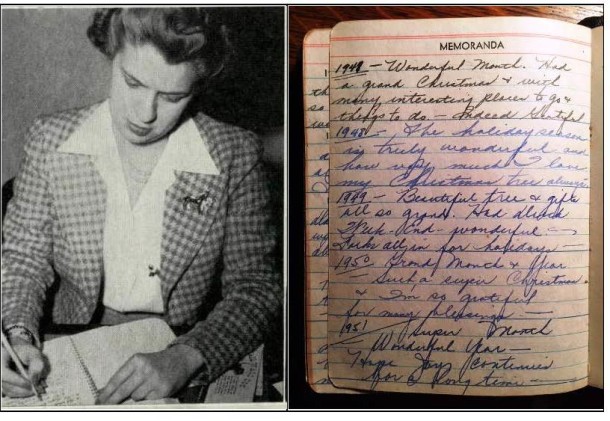 An inspirational poster recently popped up in my Facebook feed that said “If a friendship lasts seven years, psychologists say it will last a lifetime.” If this is true, I believe that Charlotte had many lifelong friends. Although she usually referred to a friend by her first name in the diary — Mildred, Lucy, Harriett — I was able to piece together enough information to figure out the last names of two of her closest friends, both of whom outlived Charlotte.

Anabel Coffin, who boarded with Charlotte’s family and was her constant companion during the diary years, remained in Indianapolis until her death in October 2000.  And even though sorority sister Beulah Woolsey got married and moved away in the late 1940s, Charlotte wrote her several times a week during the years she kept the diary.  Beulah died last January. 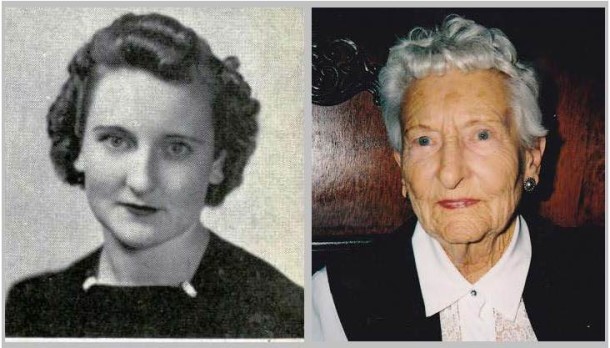 Beulah Woolsey Schoeneberger, as shown in the 1942 Central Normal College yearbook and in her 2014 obituary.

The house at the 3015 Capitol where Charlotte wrote in her diary and spent most of her life is now on the market. Although the front porch where she and her friends ate fried chicken after the Indianapolis 500 has since been enclosed, the house retains its original woodwork and much of its old-fashioned charm.  I can almost see Charlotte running down the stairs to have lunch with Anabel or post a letter to Beulah. 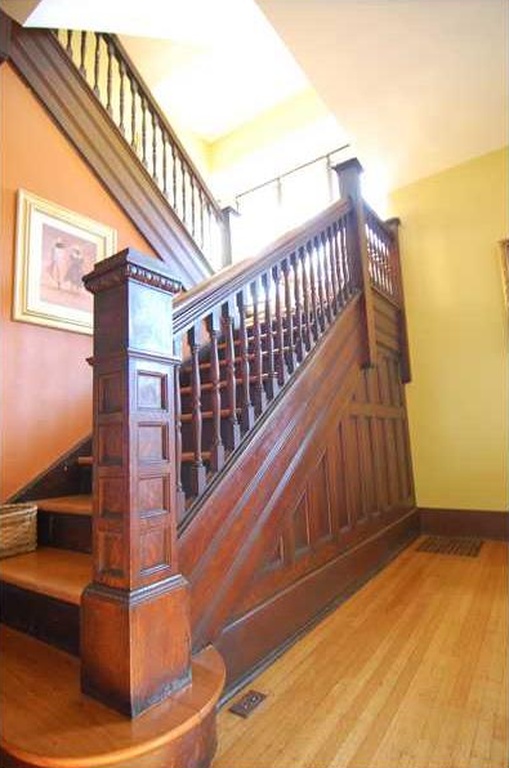 Charlotte’s diary is now back home in Indianapolis after traveling to Chicago and back.  I don’t know the next stop on its journey.  Perhaps a potential buyer will walk through the house and hear the echoes of laughter that tend to linger in places where people were happy.  Perhaps the buyer will love history and will contact me for more information about Charlotte. Perhaps I will give the diary to the buyers and urge them to keep it in the house for future owners to cherish.

Indianapolis Collected: The Ravages of the Road