Indianapolis Collected: To Market, To Market

It was a sad day for Indianapolis when Mrs. Herd threw in the trowel. “North Meridian May Lose Its Only Truck Garden,” the Star headline read on September 27, 1953. “Mrs. Emma Becker Herd, 3947 N. Meridian Street, is planning to sell her property and…retire from the growing and selling of vegetables and fruit.”

Area residents were stunned by the news. Mrs. Herd’s truck garden was a tradition in the neighborhood that is now known as Meridian-Kessler. The first seeds were planted by her mother-in-law in 1892 when the large house at 40th and Meridian was still in the country. Although 60 years later the neat rows of fruit trees and garden vegetables looked out of place on swanky Meridian Street, Mrs. Herd’s produce stand was the last remaining truck garden on the city’s main artery and a convenient stop for downtown workers who wanted to pick up some fresh fruits or vegetables on their way home from work. Far more convenient, in fact, than the struggling City Market.

By 1953, the City Market was becoming obsolete, replaced by chain grocery stores and home freezers that could store a month’s worth of meat. But this wasn’t the first time that the market had struggled to survive. In fact, the mortar had barely dried on the bricks of the 1886 structure when city leaders began scheming to tear it down.

Because the lot where City Market stands is one of the few public spaces in Indianapolis that has been used continuously for the same purpose since the 1830s, the story of City Market is really the story of our city. Artist Raymond Turner captured the history of the market in a series of posters he designed from 1969 to 1975 for the Cathedral Arts Society’s annual “To Market, To Market” ball. Today, the posters are hard to find and highly collectible. 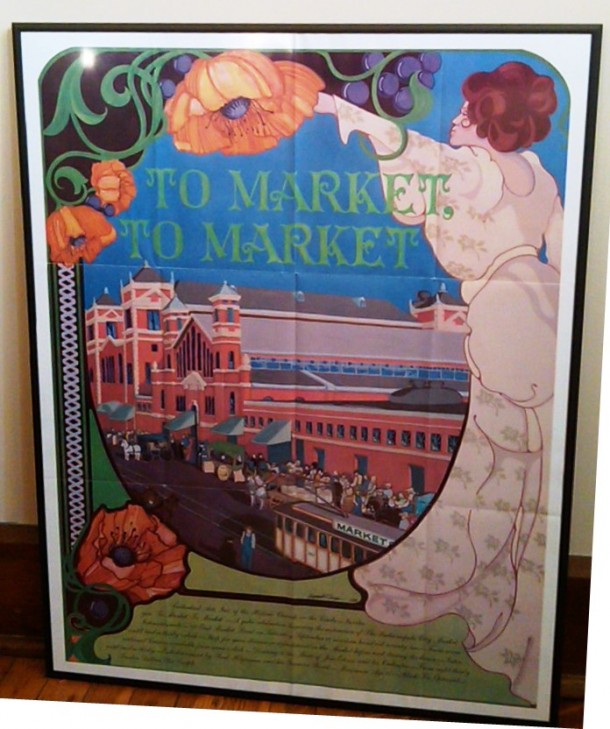 The 1972 poster, above, shows the City Market as it might have looked in the 1890s, with vendors lining the curbs and Tomlinson Hall looming in the background. Designed by architect D.A. Bohlen, Tomlinson Hall was built in 1886 with proceeds from the sale of land bequeathed by Stephen Decatur Tomlinson. The 2 ½ story hall had a massive auditorium on the second floor that seated nearly 4,000 people. The lower level was a large market area. Upon completion of the City Market, meat vendors moved in and freed Tomlinson Hall for use as a vegetable market.

Less than a decade after it opened, City Market became embroiled in a fight with City Hall that ultimately went all the way to the U.S. Supreme Court. The first volley was fired in 1907, when Mayor Charles Bookwalter proposed replacing the market building with city offices. After a trial court ruled that the city was only the trustee for the market and could not alter its use, Bookwalter built his City Hall on Alabama Street. 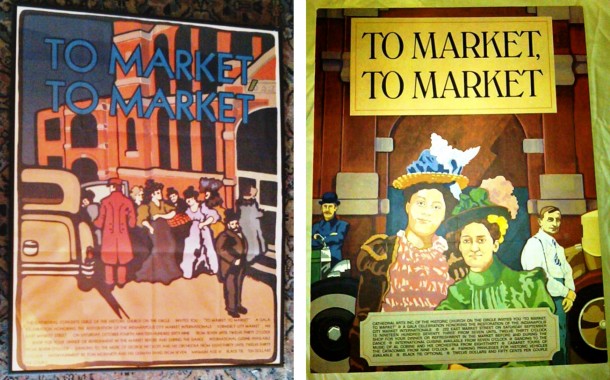 Pictured above, left, is the poster for the first To Market, To Market ball, held on October 4, 1969. Tickets to the black tie event were $10 per couple. The poster on the right is from 1973. By then, ticket prices had increased to $12 per couple and the event was black tie optional.

Over the next decade, the condition of City Market slowly deteriorated. A plan to demolish the market house and Tomlinson Hall and replace the Bohlen-designed buildings with a 10,000 seat auditorium and two-story market place gained support. The sketches have been described as “a cross between a basketball fieldhouse and a state fair exposition building.” The plan was abandoned in 1923, and simple repairs were finally authorized by City Hall. 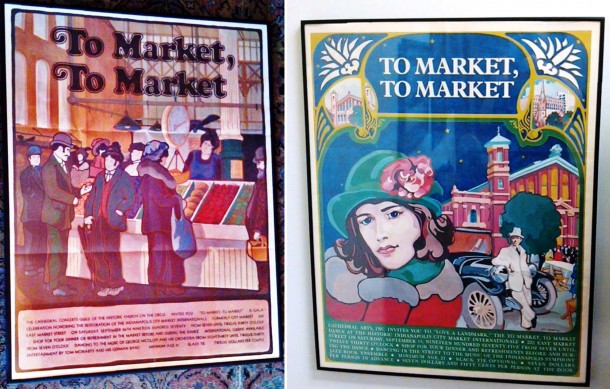 The 1970 poster showed a produce stand as it might have appeared in the 1920s. The 1975 poster captured the spirit of the jazz age.

The 1930s marked a period of peace between City Market and City Hall after the council passed an ordinance banning curb vendors. Long a source of irritation to stand holders, curb vendors had proliferated to the point that they surrounded the nearby Marion County courthouse and the market building itself. Finally in 1933, a coalition of clubs and civic groups was successful in securing passage of an ordinance outlawing the sidewalk merchants. The ordinance was promptly challenged in court by a group called the House-Wives League, which claimed that the decades-long practice of sidewalk vending gave the House-Wives property rights in the sidewalks abutting City Market. The state Supreme Court disagreed and the ordinance was upheld. 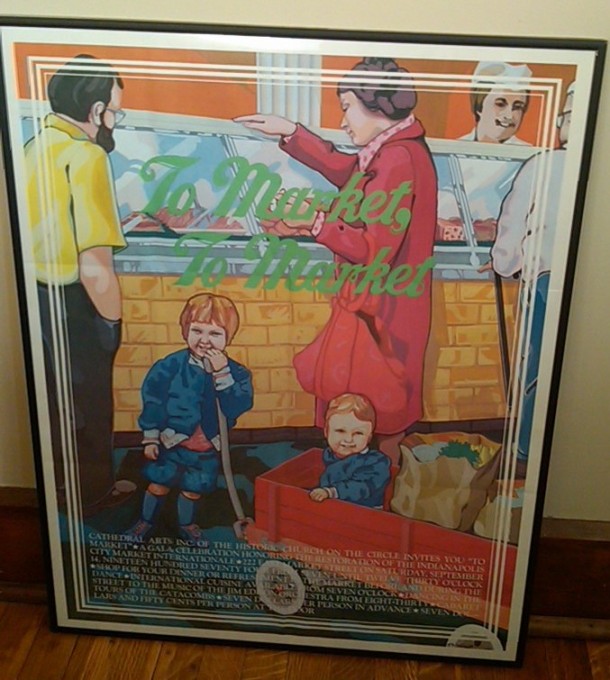 The 1974 poster shows refrigerated meat cases. The market first installed refrigeration in the 1920s, and vendors used the outdated system through the 1960s.

Although the Supreme Court had determined that that neither the House-Wives nor any other private citizen owned the sidewalks outside City Market, the issue of who owned the market itself remained murky. The state had granted the City of Indianapolis operating rights in the beginning, but it wasn’t until 1947 that the General Assembly adopted legislation authorizing the state to deed the market to the city. In 1950, Governor Henry Schricker signed a quitclaim deed conveying the tract of land where City Market stood to the City of Indianapolis.

One of the first problems facing the new owner of City Market was the lack of adequate parking for shoppers who now traveled exclusively by automobile. When part of Tomlinson Hall was destroyed by fire in 1958, city planners came up with an innovative solution to solve the market’s parking woes. If the city leveled the City Market along with Tomlinson Hall, there would be ample room for a new parking garage. Stand holders sued, claiming that the city had a binding obligation to operate a market on the site since the property was dedicated for a market in Alexander Ralston’s 1821 plan.

In 1962, a judge ruled that City Hall could use the market space for any purpose it wanted. Two years later, the city health department said that City Market must be repaired or closed. Eager to use the valuable Market Street property for another purpose, the city ordered the market to be closed. More than 800 objectors stormed City Hall, winning a delay in the plan to demolish City Market as litigation wound its way through the courts.

The Indiana Supreme Court finally got the case in 1967. The stand holders argued that the state’s acceptance of Alexander Ralston’s 1821 plan completed an “irrevocable dedication” of the land for market purposes. The Supreme Court disagreed, noting that a number of lots in Ralston’s plan had been repurposed for other uses. For example, the lot dedicated in the 1821 plan as “Governor’s Circle” was now occupied by the Soldiers and Sailors Monument, the “Court-House Square” was now the site of the City-County Building, “University Square” was a park, and a plat on the west side originally dedicated for another market had been covered with water since the Central Canal was built in the 1830s. The Supreme Court ruled that City Hall had the right to demolish City Market and build a parking garage.

While the state Supreme Court ruling was under appeal to the U.S. Supreme Court, Richard G. Lugar was elected mayor of Indianapolis. Days after he took office, the stand holders finally lost their court battle when the U.S. Supreme Court declined to hear the case. They had won the war, however. Lugar made his support for the market clear, and appointed a new market manager tasked with making the struggling market self-sufficient. Within a few months, City Market was designated a national historic landmark.

After City Market was removed from the tax rolls in 1968, the Cathedral Arts Society began making plans to raise funds for needed repairs and renovations. The inaugural To Market, To Market Ball was a black-tie affair, drawing the city’s most prominent citizens to a venue then dubbed “City Market Internationale”.

In 1974, Lilly Endowment donated $4.7 million to restore the main structure, add stall and restaurant space, and improve landscaping. Extensive renovation began in 1975, and the new market, described at the time as having a “French Quarter flair,” was officially reopened on Sept. 16, 1977. Nearly 4,000 people were expected to attend the ball celebrating the renovated City Market building.

Despite its optimistic launch, City Market continued to struggle to find its niche in the market place. The market house had evolved from a busy farmer’s market to a lunch-time food court for downtown workers. To make matters worse, visitors and vendors complained about the lack of parking spaces, the glaring sun streaming through the glass curtain wall, and inconvenient basement storage areas. 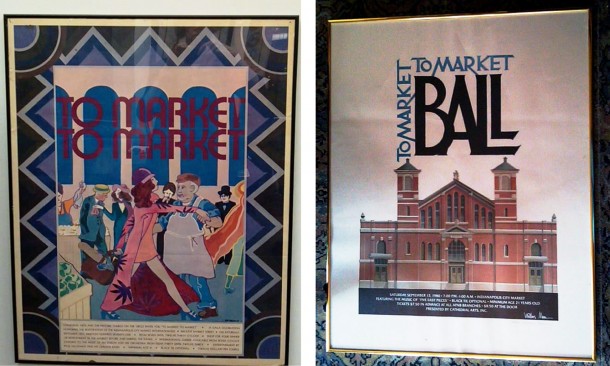 The 1971 poster on the left has a decidedly disco flair – even though it would be six more years before Indianapolis caught Saturday Night Fever. The poster on the right is from 1980 and is signed by the artist, Wilbur Meese. Although most of the posters were printed on thin paper, folded and sent out as invitations, a smaller number were made as commemoratives.

Over the years, various proposals were floated to bring new life to the old market house. Some were successful, but many failed to pan out. After Market Square Arena opened in 1974, the city thought it could draw in crowds by relocating the Pacers ticket office to the City Market, but the deal fell through. In the late 1970s, the city tried unsuccessfully to lure a restaurant to the so-called catacombs – the labyrinth-like basement of Tomlinson Hall. The cost of complying with fire codes proved to be prohibitive, however.

Other plans that never made it off the drawing board included refrigerated lockers so people could buy their groceries at lunchtime and store them until they left for home, an elevated walkway between City Market and the City-County building so patrons wouldn’t be deterred by bad weather, and a 10-story office building in the west wing of the market.

From the first open-air market that opened on Market Street in 1832 to the modern-day version, City Market has managed to survive by continually reinventing itself. Now, in its 125th year, the City Market is returning to its roots (with a 21st century twist) as it hosts the Indy Winter Farmer’s Market, a new Indy Bike Hub YMCA and the Tomlinson Tap Room. If you’re reading this article on Saturday morning, PUT DOWN YOUR DONUT and proceed immediately to the Winters Farmer’s Market. That’s where this little piggy is going. 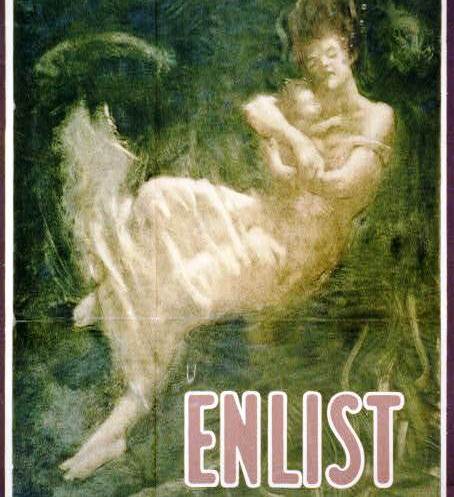