If you ask a random group of people which candidate promised Change We Can Believe In, who told us it was Morning in America, and what constitutes the San Francisco Treat, most will correctly answer Barack Obama, Ronald Reagan and Rice-a-Roni. However, you’d be hard-pressed to find anyone who can identify the local candidate who pledged to Stand Up for Indianapolis, boasted he would Bust the Machine, or (in a nod to low voter expectations), simply said I will Do the Job. That is, unless you ask Charlie Hunter.

While many political collectors focus primarily on presidential campaigns, Hunter has amassed a fascinating and comprehensive collection of buttons, posters, brochures and other items distributed over the past 115 years by candidates for mayor of Indianapolis.

Hunter grew up in a political family and started collecting campaign items in 1944, when he was only 10 years old. His father, Allen Hunter, had been elected mayor of Beech Grove the previous year, launching a political career that spanned several decades. The poster (below) is from the 1950s. 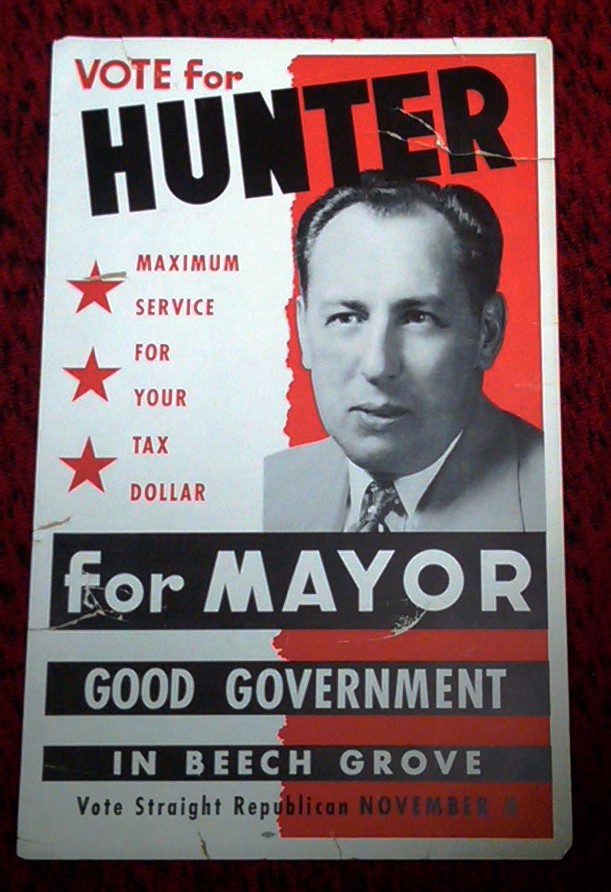 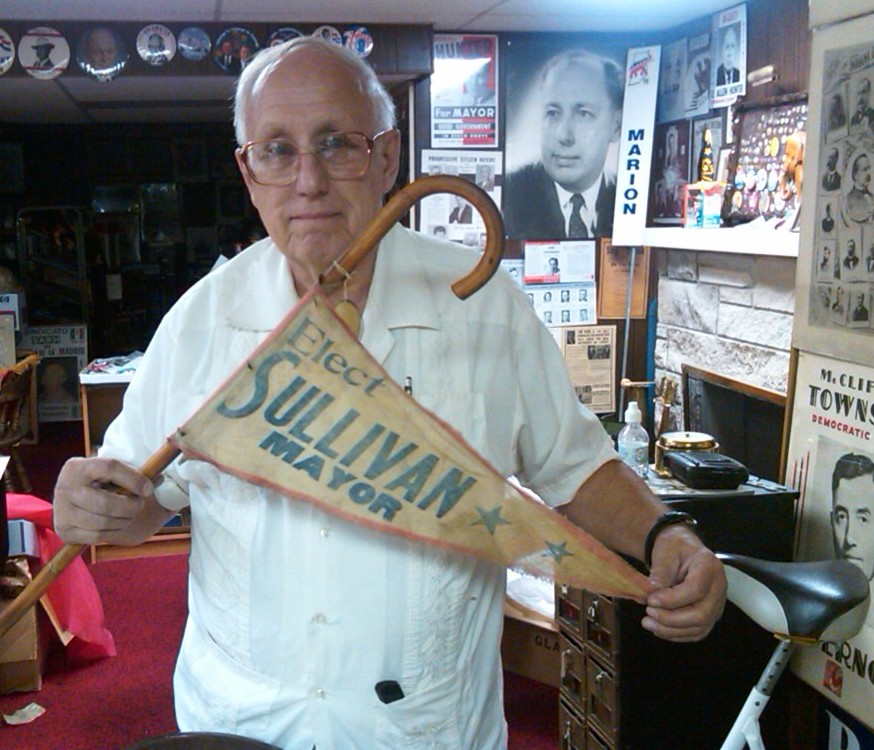 The oldest item in Hunter’s extensive mayoral collection is a flag for Thomas L. Sullivan, a Democrat who served from 1890-93. Mounted on a cane, the flag would have been waved by supporters during parades and rallies.

The first Indianapolis mayor to be born in the city, Sullivan lived in the downtown area his entire life, including the last 54 years when he resided at 503 N. Capitol in a home built by his maternal grandfather, Sen. Oliver H. Smith. His paternal grandfather was Jeremiah Sullivan, a former state Supreme Court justice who is widely credited with proposing the name “Indianapolis” for the new capital city, and his son, Reginald Sullivan, served two terms as mayor in the 1930s and 1940s.

Sullivan once said that during his tenure, Indianapolis changed from a country town to a city. Gas lights were replaced with street lights, horse cars were replaced with electric trolleys, and the newly established Department of Public Works made the ill-fated decision to build a combined sanitary and storm sewer system for the rapidly growing city. Although Sullivan campaign items are rare, you can easily find other tangible reminders of the Sullivan administration washing up on the banks of Fall Creek after a heavy rain.

Most of Hunter’s collection dates from after 1896, which is the first year that celluloid campaign buttons were widely used in campaigns. Democrat Tom Taggart, who was an early-adopter of the new campaign technology, had celluloid buttons printed bearing his image and various nicknames such as The Genial Tom or The Oily Tom when he ran for re-election in 1897 and 1899. 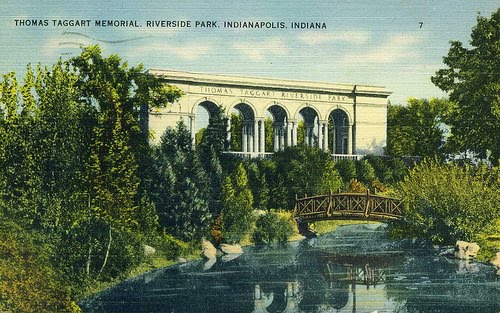 While less than a decade earlier Mayor Sullivan had led a major push to urbanize Indianapolis, Taggart recognized that the pendulum was swinging a bit too far. Taggart firmly believed that people needed fresh air and green space for reflection and recreation, and purchased 900 acres along White River that became the nucleus of the city’s park system. After Taggart left office in 1901, he assembled a group of backers to purchase the French Lick Springs Hotel and turned it into one of the world’s most elegant spas. Sadly, while the hotel was recently restored to its former glory, the crumbling condition of the city’s memorial to Tom Taggart’s vision earned the monument a spot this year on Indiana Landmark’s “10 Most Endangered” list.

Taggart’s departure from office finally cleared the way for the election of one of his former Republican opponents, Charles Bookwalter. Over the years, Bookwalter ran five times for mayor but won only two elections – in 1901 and again in 1906. Perhaps Bookwalter’s efforts to get elected were stymied by a lack of name recognition. Many of Bookwalter’s campaign buttons featured a nameless picture of his face.

Although Indianapolis elected its first mayor in 1847, the city still lacked a permanent seat of government when Bookwalter took office in 1901. After serving one term from cramped rooms in the Courthouse basement, Bookwalter made the construction of a new city hall one of his top priorities when his second term started in 1906. He presided over the cornerstone-laying ceremonies in 1909, proudly declaring that “I am myself a citizen of no mean city.”

While in modern terms Bookwalter’s reference to “no mean city” may sound like a tribute to Hoosier hospitality, the mayor was actually pointing out that the growing city of Indianapolis rose far above the average municipality. Although it has been more than 50 years since Indianapolis was governed from the old City Hall, Bookwalter’s words remain carved in stone as a challenge to future leaders to strive for excellence instead of mediocrity.

Bookwalter left office before City Hall was ready for occupancy. Instead, the first occupant of the newly constructed mayor’s office was one of the most improbable individuals to ever serve in that capacity. While the majority of the city’s mayors have had backgrounds in law or business, in 1910 a former clog dancer, vaudeville trooper, yeast salesman and auctioneer captured the popular vote with his wide grin and folksy style. Republican Samuel Lewis (Lew) Shank gained national fame his first year in office by hawking potatoes, onions, eggs and cheese from the steps of City Hall in an effort to fight unfair pricing by wholesalers. Shank was successful in bringing down prices, and many of his campaign buttons, including the one pictured below, feature the colorful mayor clutching a potato. 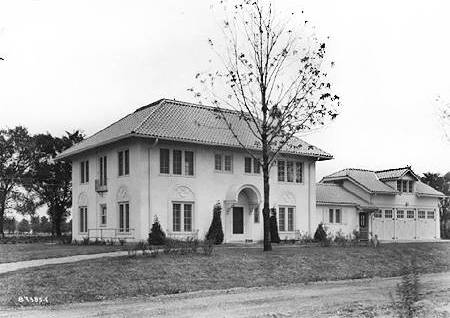 Shank resigned from office in the midst of the 1913 streetcar strike, spent a few more years in vaudeville performing with a trained horse, and then was re-elected mayor again in 1922. The stately setting of Shank’s Golden Hills home, pictured above, stood in contrast to the personality of its occupant, who governed with a comedic touch. In 1922, for example, the New York Times reported that Shank had announced a bold new plan to discourage motorists from exceeding the speed limits. Under Shank’s plan, every person arrested for speeding in Indianapolis would be held without bond in a padded jail cell until a sanity test could be administered by the Sanity Commission.

Shank was once of accused of stealing a turkey from City Market. He replied that no man’s reputation was safe, because “it wasn’t a turkey, it was a goose.”

With Shank out of the running for the 1913 election, a new Democrat emerged to defeat now-perennial Republican candidate Charles Bookwalter. Perhaps Joseph Bell’s defeat of Bookwalter can be chalked up to the fact that Bell actually included his name on his campaign buttons and even attached an actual bell to remind voters of his name. Unfortunately, this clever tactic did not work so well for Republican William Sharp when he ran against Charles Boswell in 1959. No doubt the tiny axe attached to the campaign pin reminded voters of something other than Sharp’s name.

Bell’s tenure was marked by a series of public improvements that remain in place today. Pogue’s Run was transformed from an open sewer to a covered drain, the city’s parkways and boulevards were extended, and the sunken gardens at Garfield Park were constructed. Bell’s administration was also marred by controversial voter fraud allegations. In 1915, Bell was found not guilty of conspiracy to commit a felony in the 1914 election which resulted in the indictment of 129 persons. Bell died in 1923 from an accidental, self-inflicted gunshot wound suffered at the Indianapolis Gun Club. 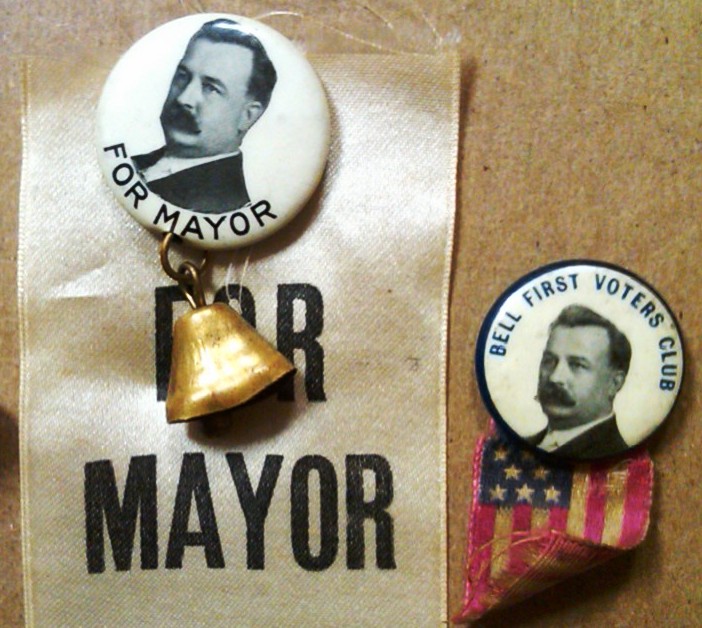 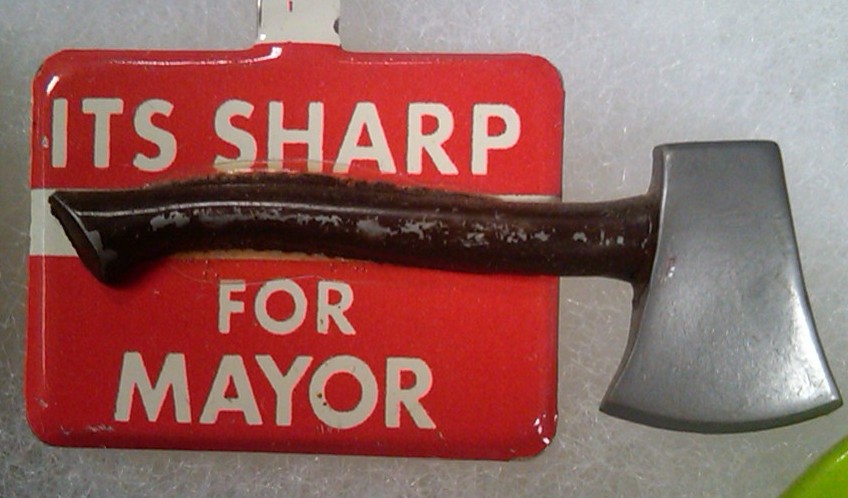 In 1925, Republican John Duvall successfully campaigned on a public slogan of Liberty & Justice United while secretly currying the favor of Ku Klux Klan Grand Dragon D.C. Stephenson. After the election, Duvall travelled to an undisclosed location in Illinois where he met with Klan leaders. Following the meeting, several Klansman were given high-ranking city jobs. For a while, Duvall was able to ride above the storm of KKK controversy that swirled following the arrest of Stephenson for the rape and murder of Madge Oberholtzer. However, after about a year in prison Stephenson decided to leverage his intimate knowledge of Klan corruption into a better deal with authorities, and offered up evidence on Duvall and other officeholders that had been hidden in black boxes. One of the boxes contained a note signed by Duvall pledging that in the event he was elected mayor of Indianapolis, he would not appoint any person to the Board of Public Works without Stephenson’s personal endorsement. 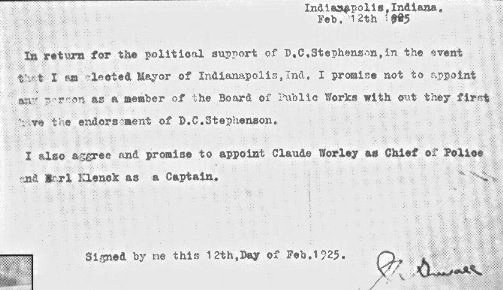 In October 1927, Duvall was found guilty of corrupt practices, sentenced to 30 days in jail, and fined $1,000. What happened next was an extraordinary chain of events that led to the first – and only – woman to ever serve as the mayor of Indianapolis.

Under the law in effect at the time, the city comptroller automatically succeeded a mayor who died in office or resigned. Duvall named his wife comptroller, and resigned a few days later. Mrs. Duvall then reigned as mayor for 14 minutes, which was how long it took her to appoint Ira Holmes as comptroller. Upon Mrs. Duvall’s resignation, Holmes attempted to take office but a tug-of-war ensued after the council formally ousted Duvall and appointed council president Claude Negley as mayor pro tem. Finally, after two weeks of upheaval, Ert Slack was selected by the council to fill out the remainder of Duvall’s term.

I wish that I had more time and space to share the rest of Charlie Hunter’s collection with HI readers, including stories about bow-tied Republican Alex Clark (1952-56), who approved construction of the new city-county building, Democrat John Kern (1935-37), a paralyzed polio survivor who graduated from Harvard Law School and had a distinguished career as chief judge of U.S. tax court, and Republican Charles Jewett (1918-22), who was instrumental in persuading the American Legion to establish its national headquarters in Indianapolis. 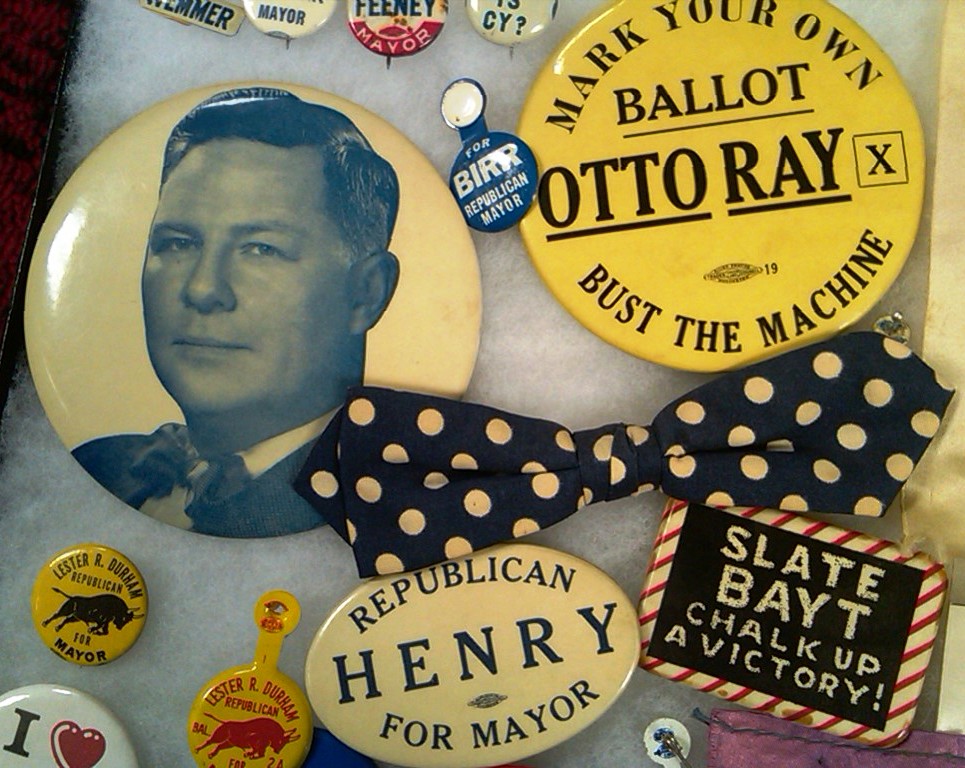 If you’re interested in learning more about political collectibles, the American Political Items Collectors is holding its regional conference and show next weekend at the Ramada East in Indianapolis. Admission is $3 to the show, which runs from 9 a.m. to 3 p.m. on Saturday (September 17). Political memorabilia dealers from throughout the country will feature items ranging from high-end Lincoln collectibles to local campaign pins and posters. In addition, Mike McQuillen, who currently represents the 12th district in the City-County Council, is also a great source of information on the history and value of political items.  A long-time dealer of political collectibles, McQuillen is president of the Indiana APIC chapter and may be reached through his website, www.PoliticalParade.com, or via email at michael@politicalparade.com.