A little brown jug of whiskey shoved under a kitchen table cost pioneer historian John H.B. Nowland his own place in the city’s history books. In 1910, the school board was planning to name a new school after Nowland, who arrived in Indianapolis as a child in the winter of 1821 and later distinguished himself by penning two of the city’s earliest histories.

Unfortunately, some ladies from the near-eastside neighborhood where the school was located caught wind of Nowland’s fondness for the drink and the rest is NOT history, at least as far as Nowland is concerned. As a result of the ladies’ lobbying, the Nowland name went down the drain, and Brookside Elementary at 10th and Dearborn is one of only a handful of IPS schools that is not named after an actual person.

Was this too harsh a penalty for engaging in behavior that was widely accepted and even encouraged in early Indianapolis? Perhaps, but our city’s attitudes toward the demon rum have swung back and forth more often than a saloon door on a Saturday night. 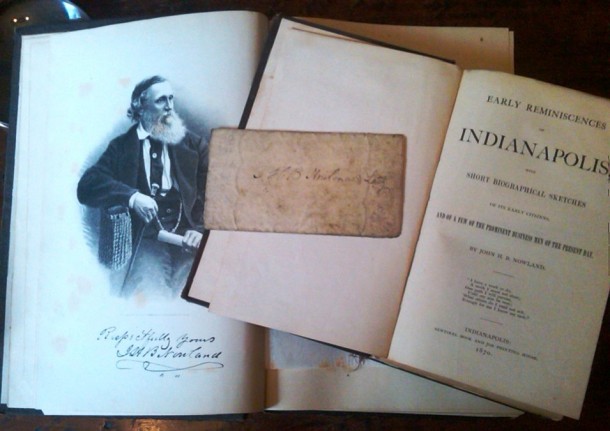 Nowland wrote "Early Reminiscences of Indianapolis" in 1870 and "Sketches of Prominent Citizens" in 1876. He's pictured on the flyleaf of the latter book - perhaps his infamous whiskey bottle is stashed in the wicker basket. I found both books on ebay a number of years ago, along with an invitation to a ball at Washington Hall that bears Nowland's signature.

Everyone drank whiskey in the early days of Indianapolis – and the whiskey was drunk every which way. For a time, no birth, wedding, funeral, shucking, quilting or barn-raising was complete without large quantities of whiskey. Even the most mundane marketing chores were spiked with whiskey, since it was common practice for merchants to set out a half-gallon bottle of whiskey for all to enjoy.

As an early account of the settlement noted, “Whisky was the prevailing drink. Whisky raw and whisky sweetened, whisky hot and whisky cold, and sometimes whisky watered and often whisky medicated.” Whiskey was so popular that in October 1827, it was reported that the city’s 1,000 residents had managed to consume nearly 300 barrels of whiskey in the previous year. This was quite an accomplishment, considering that half of the population was female and 400 were under the age of 15. Despite the city's off-again, on-again attitude toward temperance, there are plenty of jugs and bottles available as mementos of Indianapolis' more sodden days. Pictured above are a set of set of whiskey jugs from the A. Kiefer Drug Company. Note the misspelling of "Kiefer."

By the late 1820s, however, the door began swinging the other way. The same doctors who liberally prescribed alcohol-based concoctions for medicinal purposes were now preaching temperance as they witnessed the devastating effects of alcoholism in their patients.

The Temperance Society of Marion County was organized on October 3, 1828. Its aim was to “discontinue the use of ardent spirits, except as medicine, both by precept and example.” The organization espoused total abstinence from “ardent spirits,” which was harmful to one’s physical and mental being and also tended “to shorten life.” Most of the town’s leading citizens participated, all of whom had regularly used liquor.

There was, of course, a loophole. Many members of the early temperance societies did not consider beer, wine and hard cider to be “ardent spirits.” This view was supported by the Methodist Episcopal Church, which published an editorial in 1841 opposing “teetotalism as contradicting the acts of the Savior and Saint Paul.” Even the state Supreme Court weighed in on the issue, ruling in 1836 that port wine was not covered under the law regulating spirituous liquors because it was fermented and not distilled.

Some historians claim that the word “teetotaler” originated during this period, when temperance society members who believed that total abstinence actually meant TOTAL abstinence were marked in the society’s books with a “T” for “total.” 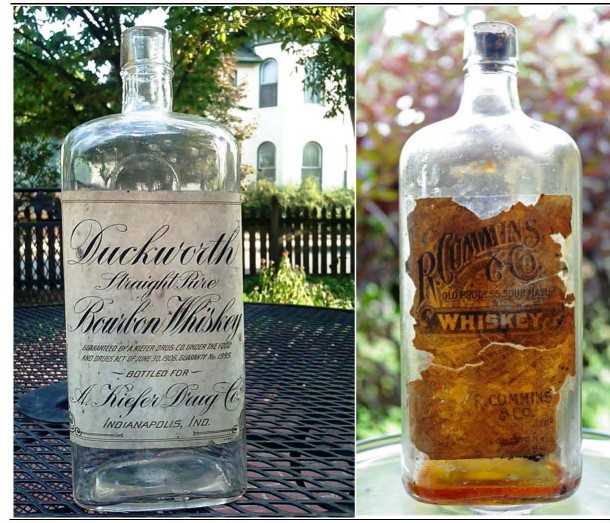 The sour mash whiskey (above right) was distributed by the Kiefer-Stewart Drug Company. Despite the damaged label and the whiskey residue, the bottle sold for $36 last week on ebay. The front label proclaims the product's "absolute purity" and notes that it is the perfect whisky for "medicinal purposes." No such assurance was needed for the bourbon whiskey on the left, which was bottled pursuant to the Food and Drug Act of 1906.

Despite the early debates over the meaning of “total,” by the late 1830s the temperance movement was having a sobering effect on the formerly free-wheeling pioneer settlement. The flow of free liquor in the stores began to dry up, and the citizens started judging the character of a man by his drinking habits.

Still, drinking remained such a popular pastime that when the legislature passed a total prohibition law in 1854, Indianapolis newspapers reported a dramatic drop in riots, rowdying and other alcohol-fueled crimes. This peaceful period only lasted a few months until the law was overturned by the state Supreme Court. Although the prohibition forces enjoyed modest success at the Statehouse during the post-Civil War era, it would be another 50 years before the legislature successfully put a cork in the free flow of liquor.

Starting in 1895, the General Assembly adopted a series of increasingly stiff measures over a 13-year period that culminated with the passage of legislation that allowed an entire county to declare itself dry. This resulted in a drought worse than the dry spell faced by Hoosiers today. By the end of 1909, 70 out of 92 counties were dry, along two-thirds of the cities and 90% of the townships and towns. Only a single county – Vanderburgh – remained completely wet.

Still reeling from the effects of the “morning-after” hangover brought on by this temperance binge, Hoosier voters sent a Democrat majority to the legislature which promptly repealed the “dry county” statute. Voters were now required to decide the issue of dryness on a township-by-township basis. The number of dry counties dwindled to 26. 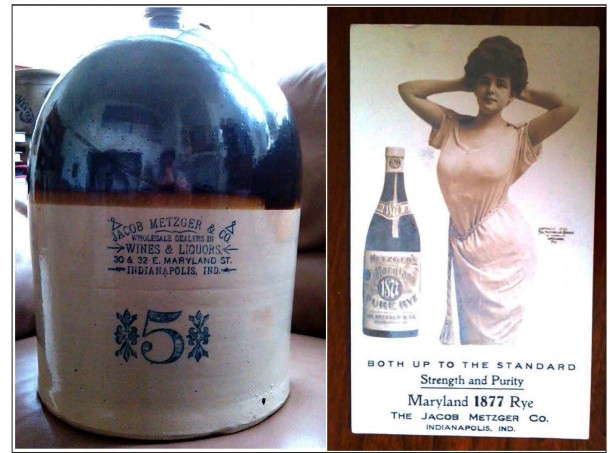 In addition to bottling beer for the Indianapolis Brewing Company, Jacob Metzger was also a wholesaler dealer for various wines and liquors. One of Metzger's brands was Maryland 1877 Rye, which had both "Strength and Purity" as clearly evidenced by a scantily clad woman striking a provocative pose for the camera.

In order to enforce both the liquor licensing laws in wet areas and the dry laws in dry areas, the 1907 legislature adopted a blind tiger law. For a midwest city located miles from any jungle, Indianapolis had an astonishingly high number of blind tigers, which was slang for a low-class speakeasy. The term had its origin in a 19th century scheme devised by saloons to circumvent liquor laws. The saloon would charge patrons a quarter to see an oddity such as a blind pig or a white tiger, and a complimentary cocktail would be thrown in as a bonus.

The Blind Tiger law imposed mandatory jail time for persons convicted of operating an unlicensed saloon, making it one of the strictest laws in the country. This wasn’t the provision that drew the most controversy, however. Instead, a battle was brewing over some language contained in the fine print that allowed wholesalers to sell alcoholic beverages in quantities of five gallons or more while prohibiting druggists from selling any alcohol unless prescribed by a physician.

Caught off guard by the new restrictions, the drugstore lobby sprang into immediate action. Within a few days, new legislation was enacted that permitted a druggist to sell liquor in quantities of a quart or more if the purchaser was known to the druggist (wink) and signed a written statement endorsed by the druggist that the liquor was to be used for medicinal, mechanical or scientific purposes (wink, wink). 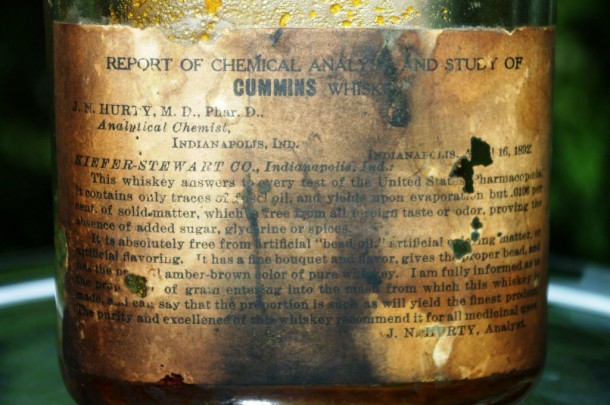 An 1892 bottle of sour mash whiskey distributed by the Kiefer-Stewart Company displays the results of a chemical analysis performed by J.N. Hurty, a pharmacist/M.D. who served as State Health Commissioner from 1896 through 1922. On the label, Hurty proclaims that the "purity and excellence" of the sour mash whiskey recommended it "for all medicinal purposes."

The final rally for prohibition came during WWI and was bolstered by a rising tide of anti-German sentiment. In February 1917, a wide majority of the General Assembly adopted a statewide prohibition law, which went into effect in April 1918 – a full year before the entire nation went dry under the 18th Amendment.

But the party that started with the pioneers was already winding down. Six months before the statewide prohibition law went into effect, bar patrons in Indianapolis were shocked to find that the price of whiskey had doubled, from two drinks for a quarter to 25 cents each. The newly imposed War Tax also hiked up the costs of cigarettes and cigars. These high prices would remain in place through last call on April 1, 1918, when the lights finally went out on the city’s saloons. 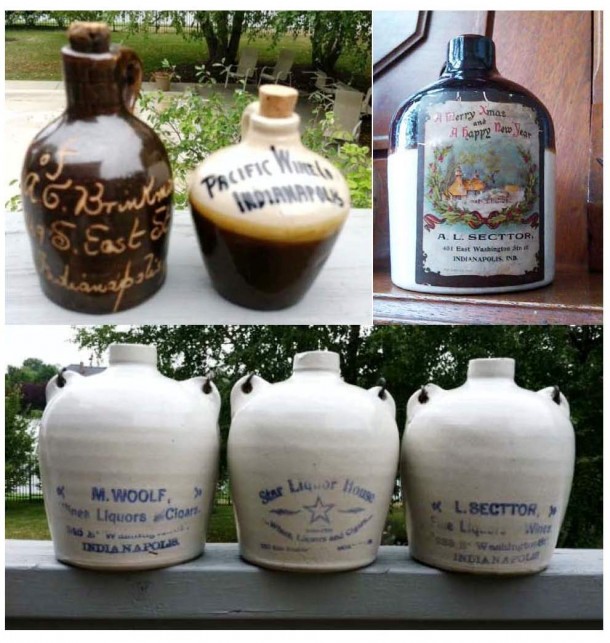 David Yount has assembled a fascinating collection of stoneware Indianapolis whiskey jugs. The jugs on the top row are miniatures, which were sold as samples by whiskey distributors or handed out by tavern owners on special occasions. Three quart jugs from various Indianapolis taverns are shown on the bottom row. Jugs like these would have been used between 1890 and 1910. 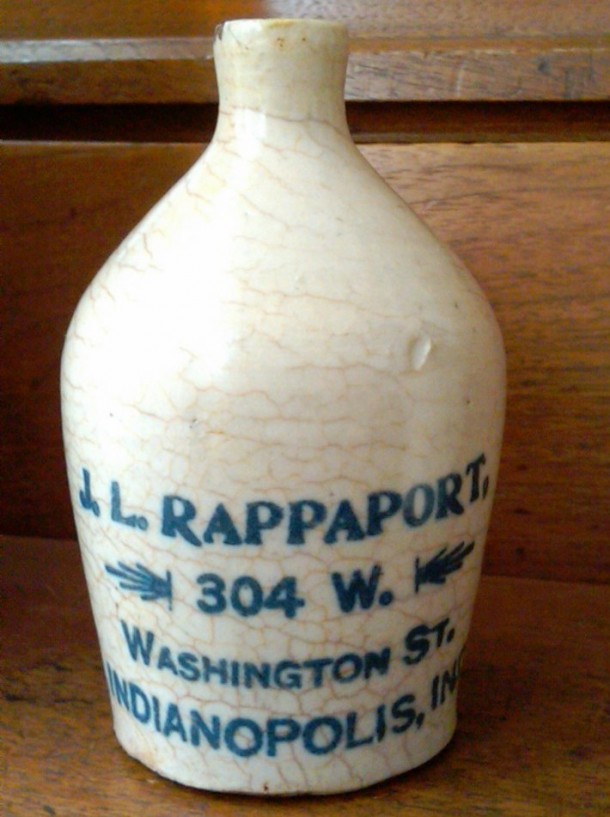 Bad spelling, or was J.L. Rappaport the first to adopt the slogan "IndiaNOplace?"