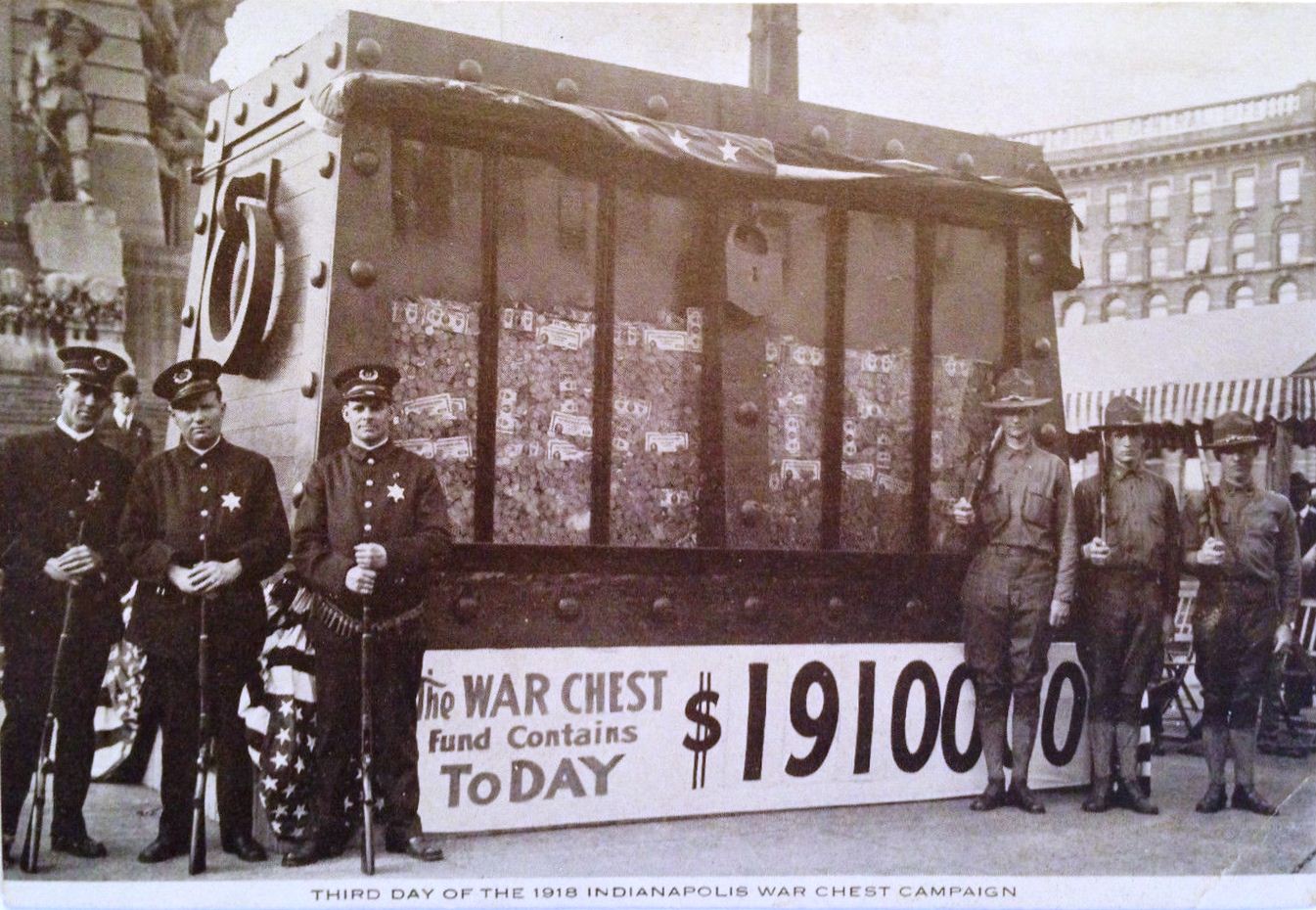 For so long as most Indianapolis residents can remember, there has always been one “hot spot” on North Meridian where the mercury was guaranteed to rise even when temperatures were falling in the rest of the city.

Not so this year.  In early September, the United Way of Central Indiana announced that it would break from tradition and put its giant fundraising thermometer in cold storage as the organization shifts its focus from the amount of dollars raised to the societal impact of those funds.

As surprising as this announcement may seem, it isn’t the first time that an Indianapolis organization charged with raising collective funds for local nonprofits has decided to ditch the iconic thermometer for a different system of measurement.  In May 1918, the Indianapolis War Chest Committee struck gold with its innovative plan to install a giant treasure chest on Monument Circle.  Indianapolis residents could monitor the progress of the fundraising campaign by simply watching the glass-fronted chest fill up with cash and coins.

“There have been clocks by the score and thermometers by the hundreds,” The Indianapolis Star reported on May 15, 1918. But “nothing like a chest filled with real money has ever been attempted to show the progress of a money-raising campaign.” 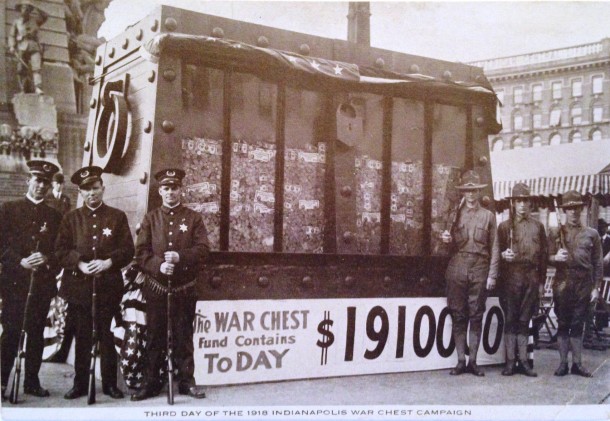 The 1918 War Chest campaign was the brainchild of William Fortune, who served as president of both the local Red Cross and the Indianapolis Chamber of Commerce. The concept was simple: a new entity would be created to raise funds for local charities and for the war effort, which would eliminate the confusion and high overhead costs associated with numerous small fundraising campaigns. This type of federated fundraising had first been tried in 1917 in Syracuse, New York, and had since been replicated with great success in other communities.

Fortune presented his bold plan on April 19, 1918 to a gathering of the city’s civic and commercial leaders.  The group enthusiastically embraced the idea, and adopted a resolution pledging their support and authorizing Fortune to appoint an 11-member executive board to carry out the campaign.

The War Chest drive was timed to coincide with National Red Cross Week, which started on May 20.  This meant that Fortune and his team had only four weeks to plan and implement the most ambitious fundraising effort ever undertaken in Indianapolis. 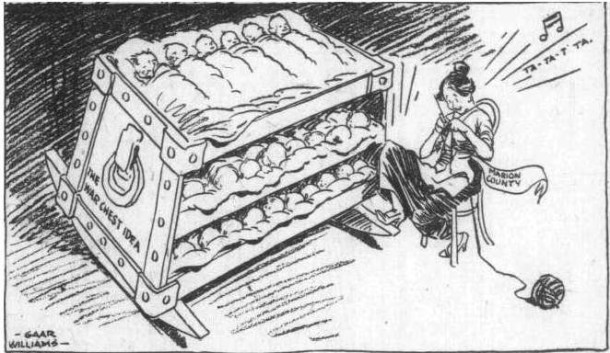 Sommers was tapped as chairman of the fund drive.  A formidable fundraiser, Sommers was president of a local furniture company and secretary of Empire Auto Company. His historic mansion still stands on Cold Spring Road and was featured in HI in April 2012.

Other civic and business leaders were then appointed to head various subcommittees charged with wooing individual donors, canvassing each Indianapolis neighborhood, organizing employee drives, and developing one of the most innovative publicity campaigns the city had seen to date.

Although the committee originally set a goal of $4 million, after some deliberation the panel instead decided to aim for 100% percent participation. Every man, woman and child in Marion County would be asked to contribute to the limits of their ability, with the understanding that the War Chest fund would take care of all wartime and charity needs for a year, during which time the citizens would not be asked to contribute to any other fundraising campaigns. 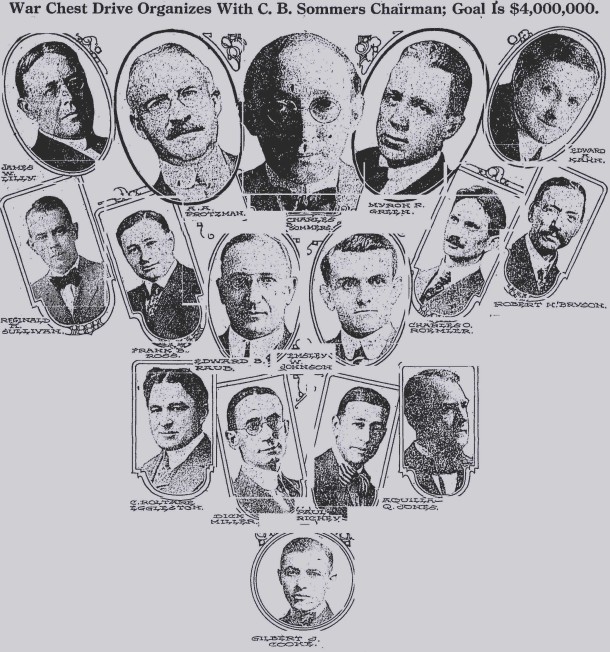 The publicity committee recruited renowned Indiana artists William Forsyth, Otto Stark, Carl C. Graf and Clifton Wheeler to paint a huge billboard promoting the War Chest campaign.  The plan to post the sign on Monument Circle hit a snag, however, when William A. Ketcham, a member of the board of control for the monument, said he would personally take an axe to any billboard that encroached on the hallowed space.

The War Chest committee turned to state attorney general Ele Stansbury for guidance on the permitted uses of Monument Circle.  Stansbury quickly opined that there was no legal impediment preventing the committee from using the monument premises to promote the fund drive. “The premises you mention,” read the official opinion, “has been dedicated to patriotism and the memory of soldiers and sailors who have fought under the Stars and Stripes….The work you are doing and propose to do would meet the applause of every soldier and sailor to whose memory the Monument was erected.”

The billboard was raised on the southeastern quadrant of Monument Circle, opposite the Circle Theater.  In the week leading up to the campaign kick-off, large crowds gathered on the Circle to watch the design come to life under the skilled hands of the four artists. 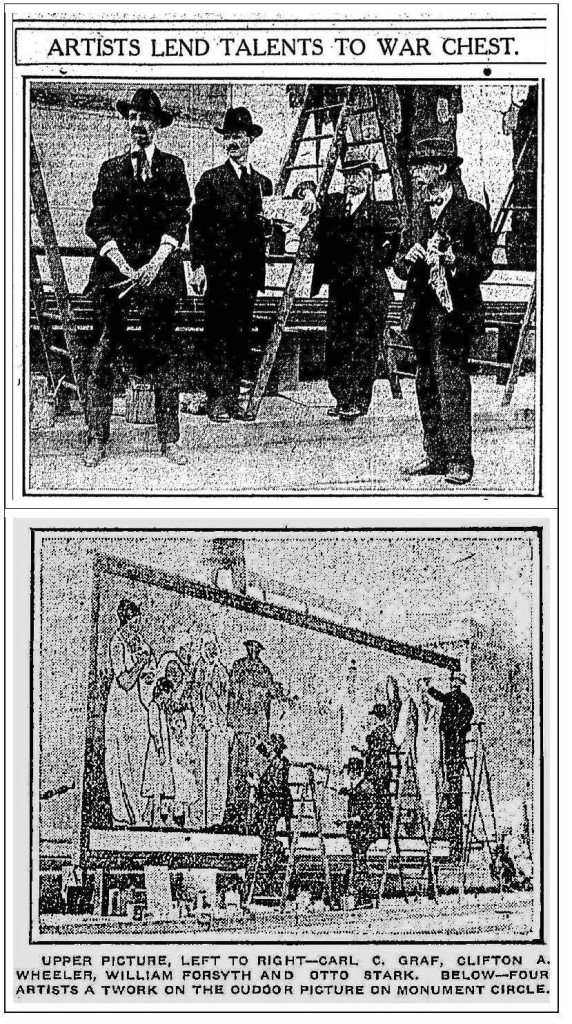 Forsyth designed the giant sign, which was intended to convey the true meaning of the War Chest. From The Indianapolis Star, May 16, 1918.

The collaboration of the four Indiana Group painters was not the only artistic endeavor incorporated into the War Chest campaign.  Indianapolis sculptor John Prasuhn also set up camp on Monument Circle to undertake the laborious task of modeling a two-ton clay sculpture while bystanders looked on.  Titled “Charity,” the statue grouping featured an 8-foot-tall woman kneeling in front of a ruined wall with an infant on her knee, a child by her side, and a dog at her feet.

Aside from the artistic Prasuhn sculpture and the Forsyth-designed billboard, the rest of the Circle took on a decidedly flashier tone during the War Chest campaign.  Two large signs were erected on the southwest and northwest quadrants, one showing a soldier in the trenches preparing to leap over a parapet, and the other depicting the same soldier after successfully completing his mission. Banners bearing the names of 900 Indianapolis companies with 35 or more employees hung from wires adjacent to the first billboard.  As each company reported 100% participation, its banner was moved to the other side of the monument where the victorious soldier was shown.

But the centerpiece of the War Chest campaign was a 14-foot pirate’s chest built of wood and iron, with a glass front facing Meridian Street. Local banks supplied the pirate’s “booty” of silver and gold coins, along with cash and Liberty Bonds.  New “treasure” was added daily to the chest to mark the campaign’s progress as the pledges poured in. By the third day of the drive, workers had to reinforce the chest with additional timbers because the weight of the precious metal was causing its sides to bulge.

Gaping crowds of up to 300 people gathered in front of the heavily guarded treasure chest during each day of the weeklong campaign. The pile of glittering gold and silver coins was more money that most people would ever see in their lifetime. 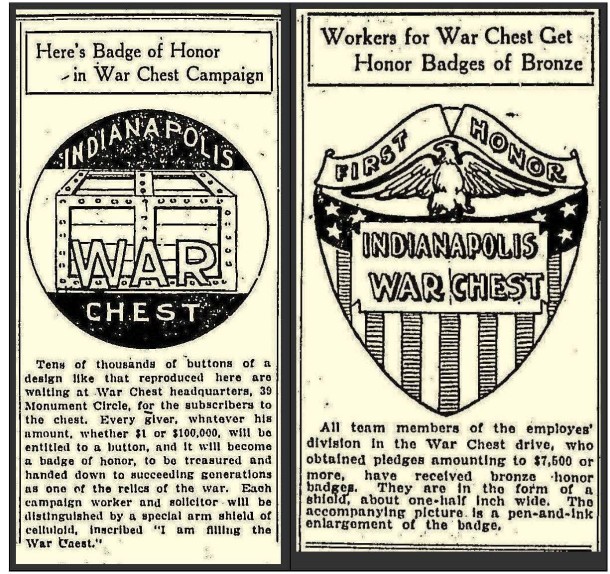 Although the display on Monument Circle was the symbolic center of the War Chest drive, the real action took place in local factories, businesses and neighborhoods as an army of volunteers waged an orchestrated blitz to gather contributions and pledges.  More than $600,000 was collected on the first day of the drive, including a $65,000 donation from Eli Lilly & Company.  Nearly half a million dollars were raised on the second day.  By the final hours of the campaign on May 28, almost $3 million in pledges and donations had been collected from the Indianapolis community.

The workplace drives were especially successful, with coworkers banding together in efforts to reach 100% participation.  The campaign’s theme was “1 to 31,” which meant that employees earning less than $2000 per year were encouraged to make a monthly contribution in an amount that was roughly equivalent to a single day’s pay.  According to the campaign organizers, this was only 4 cents per day, stretched out in 12 easy payments.

And if that wasn’t sufficient to convince an employee to contribute, coworkers sometimes turned to more persuasive tactics.  For example, employees at Stafford Engraving in the Century Building became outraged when a co-worker’s refusal to contribute kept them from reaching 100% participation. They sent him an angry letter — with a copy to the Star — accusing him of adopting a pro-German attitude and threatening “extreme measures” if he continued to balk at contributing.  The recalcitrant employee promptly pledged $12, an amount that his colleagues were firmly convinced he could afford. 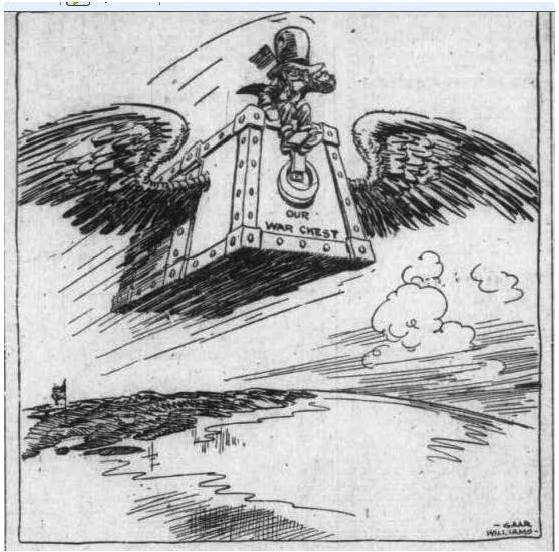 After the campaign ended, the War Chest board moved from its temporary headquarters at the Columbia Club to permanent offices in the former Indianapolis Public Library at Ohio and Meridian streets. The Red Cross was its first beneficiary, with a $450,000 contribution from the fund.  Additional large contributions were earmarked for the YMCA, the Jewish Relief Fund, and the Knights of Columbus.  In order to determine the recipients of the remainder of the fund, the board contracted with the New York-based Municipal Research Bureau to survey the capacity and capability of various local charities.

Over the next year, dozens of local charitable and war relief organizations applied for and received funding from the War Chest.  Many charities also improved their operations and decreased their overhead in response to recommendations made by the Municipal Research Bureau. However, the recommendation that several organizations with similar charitable missions merge to increase their efficiency and effectiveness was met with considerable resistance.   After the War Chest board declined to make consolidation a condition to receiving funds, William Fortune reluctantly resigned.

By then, however, the Great War had ended and the War Chest board was at a turning point.  In 1920, the War Chest was converted into a community chest that raised funds for 40 different civic, benevolent, charitable and social welfare organizations using the same methods that were deployed successfully in the War Chest drive.  This model of federated fundraising continued to evolve over the years until it finallly became the present-day United Way of Central Indiana. 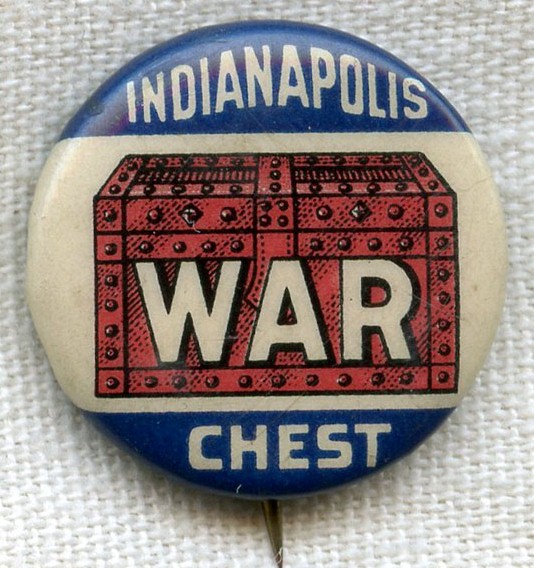 Celluloid buttons for the Indianapolis War Chest are occasionally listed for sale on ebay, but I’ve never seen any other memorabilia from the 1918 War Chest drive. Hundreds of bronze badges were made for War Chest volunteers, so surely a few remain in Indianapolis, tucked in old boxes or trunks.