J. Parke Randall was a young architect  in Indianapolis in 1953 when he received an assignment from his boss Edward D. Pierre: photographically document downtown areas for the Crossroads of American redevelopment plan. Pierre, a forward-thinking architect with a city planner’s mindset, had been hired to design a city for the future with areas designated for entertainment, transportation, government, and even fashion. Read Libby Cierzniak’s detailed article about the plan that never came to be.

New to the city as a recent architecture graduate from Washington University in St. Louis, Randall was the first tenant to move into the new Essex House Apartments at 100 E. Vermont Street. He outfitted his closet as a darkroom and made black-and-white prints of sections of the city slated for renovation including City Market, the canal, and the streets near the Indiana State House.

One of the Randall’s most unrecognizable images, to anyone who wasn’t around in the 1950s, is this view looking west from the State House at the 300 block of W. Market Street. Senate Avenue is in the foreground. The block was home to a hodge-podge of commercial and industrial buildings, including left to right: a printing company, the 1911 Crane Company (plumbers’ supplies) building, the Beveridge Paper Company factory (previously used by the American Brewing Company), and to the right the State House Annex (formerly the Medical College of Indiana and Bobbs’ Free Dispensary).  In the distance are the silos for the Acme Evans Mill. This circa 1960 aerial photograph looks southwest at the street shortly after the State Office Building had been constructed. 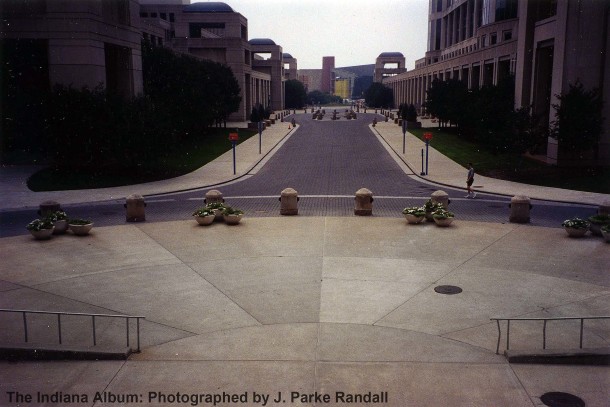 A little over fifty years later,  Randall rephotographed the sites to document the changes. Although most of Edward Pierre’s Crossroads plans had not come to fruition, the area west of the State House is now a government center as he envisioned. Today this block of W. Market Street is renamed the Robert D. Orr Plaza. On the right is Indiana Government Center North, originally constructed in 1960 and remodeled and expanded in 1993. On the left is Indiana Government Center South, finished in 1990. The Indiana State Museum, located in White River State Park, is visible in the distance.

Thanks to J. Parke Randall for letting us scan many photographs from his extensive collection. Please contact us if you would like to share interesting views of Indianapolis, including street scenes, houses, businesses, churches, schools, clubs, parks, transportation, and whatever you find interesting.