Since the US Arsenal in Indianapolis was one of three arsenals commissioned by Congress during the Civil War, it is not surprising that the main buildings followed the same plan. The sturdy storehouses or arsenal buildings were built to convey a strong military presence and all three survive today–over 140 years after construction. 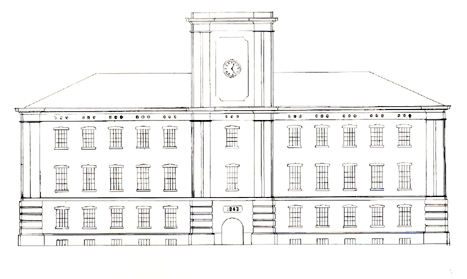 Columbus Arsenal Storehouse A plans, courtesy of the National Archives

The plans for the main storehouses were drawn in Washington by the Ordnance Department and were similar to designs already in use at other arsenals. The drawings called for a symmetrical structure in the Greek Revival style with Italian Renaissance details. Interior spaces were left open for storage and the distinctive clock tower had a functional purpose: to haul equipment to the upper floors via a pulley-operated hoist. 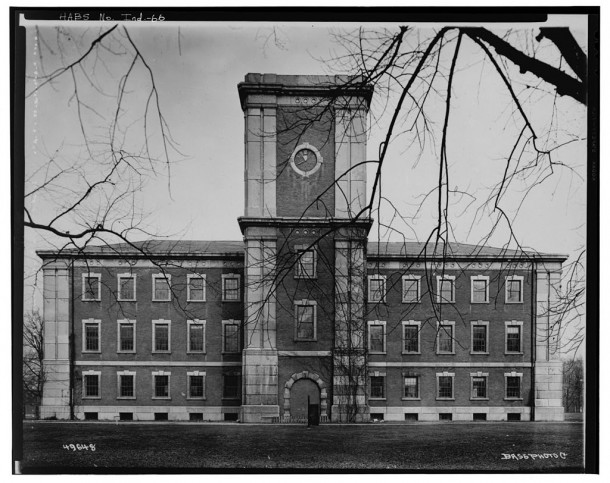 In July 1863, thirty-one year old Captain Thomas J. Treadwell (who had earlier been at Rock Island) was appointed to supervise construction at the Indianapolis site. Treadwell positioned the storehouse near Michigan Street, just south of a thick forest on the 76-acre site. He stuck closely to the six pages of plans for the storehouse, but each site used materials native to the area, in this case brick and stone. Treadwell wrote to his supervisor on January 13, 1864: “I am determined to make all the bricks required (2,000,000) on the grounds, and hope to have them ready by September first, all material being furnished on the grounds…No useful or ornamental trees are being cut except such as are on the site of the building…Excavation for basement was made during the fall.” Evidently not enough bricks could be made on site as bricks and timber were later ordered from Cincinnati. Foundation and trim stone was hauled from Vernon, Indiana, via the railroad and ox-drawn wagons. In later years an old woman who lived nearby recalled that her fiancé helped build the storehouse. She said that the cornerstone blocks were so heavy that only one could be hauled at a time. Captain Treadwell had difficulty getting supplies to the grounds, so he bought land from neighbors Sturm and Fletcher to build a road leading from the Arsenal to the National Road (now E. Washington Street). Today that road is named Arsenal Avenue.

Although the plans were drawn by an unknown architect for the Ordnance Department, Indianapolis architect Isaac Hodgson oversaw the construction of the Arsenal and other buildings.

The tower of the storehouse, now called the Arsenal, is seven stories high. Through its open archway, paved in cobblestone, carts and wagons would be driven to be unloaded by means of wooden hoist on the fourth floor. The rope which hung down through the tower from the hoist had a huge knot at the end: this made a tempting swing for children. The clock works, enclosed in a glass case on the sixth floor of the tower, are wound by hand, taking four to five minutes to wind. The heavy weights extend down two stories through a shaft. The clock was installed July 6, 1867. A huge bell is mounted on the tower. The clock faces are six feet in diameter. The hands have been replaced twice: the first two sets were of wood; the last of metal. This Arsenal clock was the clock-setter for residents of Woodruff Place. Once, when the clock stopped, workmen found that a Yellow Hammer had become entangled in one of the wheels. When the bell began ringing again, neighbors were heard to remark, “It was like getting a letter from home.” 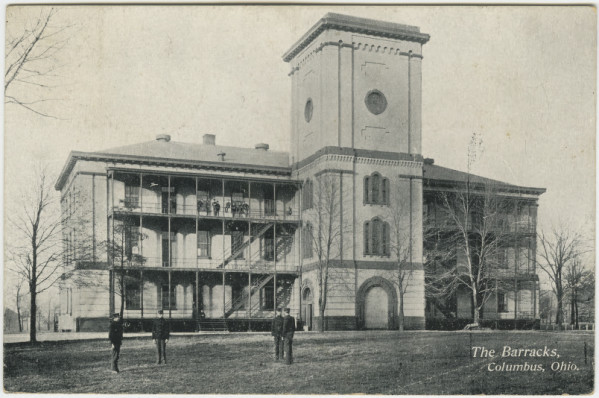 For comparison, here is a postcard of the Columbus Arsenal storehouse, also known as the Barracks. Since 1976, Columbus City Schools has used the building for the Fort Hayes Metropolitan Education Center, a public magnet school. Read about its history and see more photos on the school’s web site. 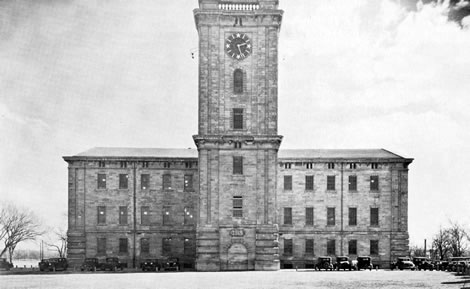 The Rock Island Arsenal storehouse supervisors made many changes to the original plans, including altering the roofline, adding twenty feet to the height of the tower, and using rusticated stone from a nearby limestone quarry. Since 1931 the storehouse, now known as the Clock Tower Building, has been home to the US Army Corps of Engineers, Rock Island District. (Read Roald Tweet’s article “The Rock Island Clock Tower” for an in-depth history.) 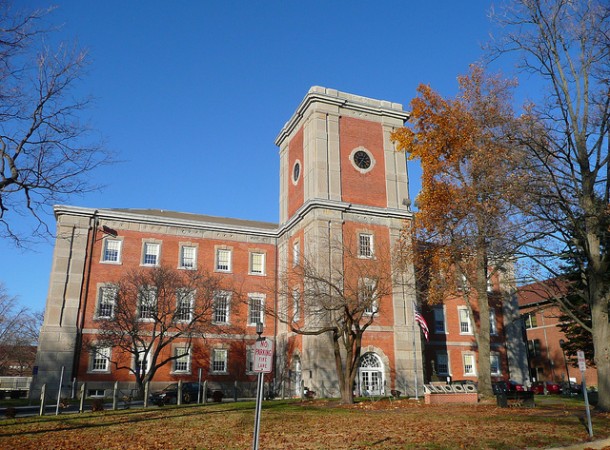 The storehouse served the Indianapolis Arsenal for nearly forty years and was said to have held over 100,000 rifles. After the Spanish-American War the government sold the grounds, which have been home to Arsenal Technical High School since 1912. During that time the building has served as classrooms and administrative offices. (Photograph by Army.Arch)