Moravian Church and house at 666 E. 25th Street (The Indiana Album: Loaned by Dortha C. May)

Us local history lovers frequently drive by empty lots in older neighborhoods and wonder what stood there before the current gas station or parking lot. Photographs and postcards help us envision the buildings that have long since disappeared. Thanks to Dortha C. May for sharing this ca. 1920 postcard of the First Moravian Episcopal Church that once stood on the northwest corner of N. College Avenue and E. 25th Street.

Dortha’s mother had saved this undated photographic postcard of a church captioned as “Moravian Church, Indianapolis, Indiana.” Someone wrote a pencil notation “this is the Church that Burned down” and she had heard stories about her mother’s family gathering  to watch the fire. Unfortunately, the location was not noted and Dortha thought the church was on the south side. Thanks to maps and old newspapers we’ve discovered that this was the First Moravian Episcopal Church, built in 1901 at 2502 N. College Avenue.

Founded in 1894 by the Moravian congregation in Hope, Indiana, the new Indianapolis Moravian Church first met at the Interdenominational Society at 2319 Talbot Avenue and a few other sites before purchasing two lots at 25th Street and College Avenue in 1895 for $3,500. The first temporary frame chapel erected at the back of the site in November 1895 was blown down by a gale nine days after construction began, but was soon rebuilt.

The above view shows the south side of the structure and the adjacent house at 666 E. 25th Street where the pastor lived. The fire that our lender’s family witnessed occurred ninety years ago. According to the December 29, 1924 issue of the Indianapolis Star,  a fire of unknown origin (probably caused by an overheated furnace) gutted the stucco church on a frigidly cold morning of 13 degrees below zero.  Two firemen, handicapped by the cold and ice, were injured in the blaze that caused $30,000 in damage, completely destroying the building and burning a valuable pipe organ and eight new memorial windows. Members later remembered that the fire hydrants were frozen and nothing was saved, including the silver collection plates that melted beyond recognition. Although it is hard to believe, the paper stated that firemen fought 63 other small fires that night, caused by overheated furnaces, short circuits, and stopped-up chimneys.

Just two weeks before the fire, the congregation of 180 members had celebrated their 30th anniversary. 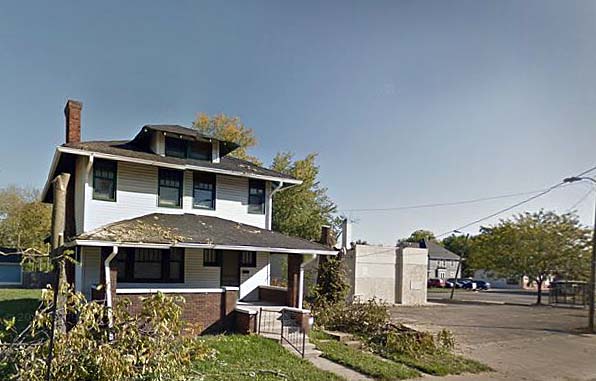 Neighbors and the Church Federation of Indianapolis contributed funds when it was learned that the church did not have sufficient insurance to rebuild. The congregation temporarily held services in a house at 656 E. 25th Street and in 1926 purchased the former Broadway Methodist Episcopal Church at E. 22nd Street and Broadway Avenue (read about the demolition of this building in 2012). In about 1928 a filling station was constructed on the former site of the church. The American Foursquare house at 666 E. 25th Street survives.

Few known images of this church exist and we’re glad that Dortha May let us scan this and other photos from around the state for the Indiana Album Bicentennial Project. Do you have rare or interesting photographs or postcards of Indianapolis or Indiana? Why not share your photographs? Contact info@indianaalbum.com to learn how to contribute.