“Placemaking” is a popular word among planning types these days. The word originated in the 1960s and refers to the philosophy and process of creating places where people will want to gather. As expressed in 2001 by Bernard Hunt, a London architect:
We have theories, specialisms, regulations, exhortations, demonstration projects. We have planners. We have highway engineers. We have mixed use, mixed tenure, architecture, community architecture, urban design, neighbourhood strategy. But what seems to have happened is that we have simply lost the art of placemaking; or, put another way, we have lost the simple art of placemaking. We are good at putting up buildings but we are bad at making places.
But back in the day before the term was even coined, Fletcher Triangle Park was a natural gathering spot for residents of the neighborhood now known as Windsor Park. 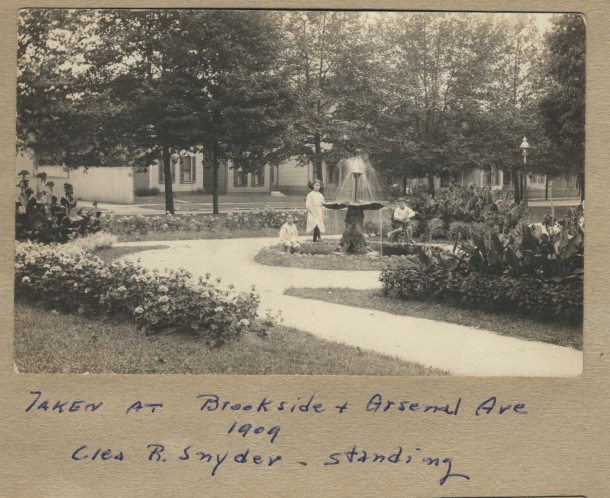 Fletcher Triangle, variously known as Fletcher Place or Triangle Park, was a small, city-owned park northeast of downtown (two blocks north of the US Arsenal grounds). Settler Calvin Fletcher had farmed this area in the 1840s-60s and his sons platted the land after his death in 1866. In 1868 they had offered to donate 30 nearby acres to the city for a park, but the city was suspicious of this offer since it would have increased the value of the adjacent Fletcher-owned property, so they refused the offer. According to Indy Parks staff, this triangle became a park in the 1870s and was sold sometime in the mid-1900s. (Indiana Album: Photograph loaned by Alan Hague)

By 1909 park was lined with wood-framed cottages. Here, Alan Hague’s grandmother and her friends pose next to the rustic-looking stone fountain. Newspapers of the era explained that the lush flower beds were planted by the Indianapolis Parks Department. In 1914 over 100,000 plants were started in the Garfield Park greenhouse and transplanted to 14 parks and street medians before Memorial Day. (Indiana Album: Photograph loaned by Alan Hague) 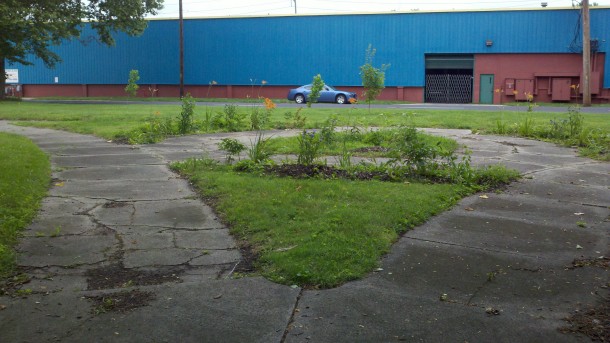 The neighborhood drastically changed in the 1930s and ‘40s when Schwitzer-Cummins Company expanded and demolished dozens of houses. The old Schwitzer building is now known as the Circle City Industrial Complex. Today, the fountain is gone and all that remains are cracked sidewalks, large Sycamore trees, and granite curbs. (Photo by Joan Hostetler, June 2011) 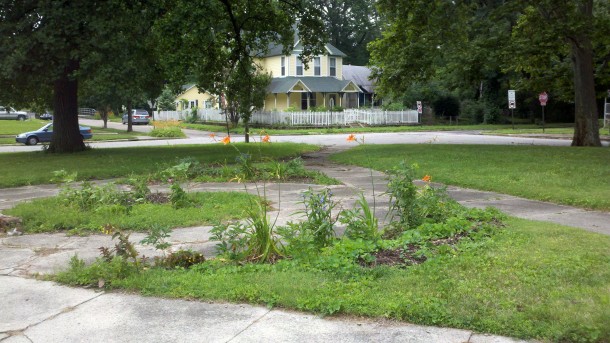 Last year a nearby non-profit adopted the area and planted flowers in the park. The Windsor Park Neighborhood Association  hopes to acquire the land and return it to the charming park that it once was. (Photo by Joan Hostetler, June 2011)