As Indianapolis expanded, it was necessary for the Indianapolis Police Department to move into the neighborhoods and by 1912 four substations had been established. This one-story cottage, located at 1117 Prospect Street in Fountain Square, housed Police Precinct Station No. 4. Two uniformed bicycle patrolmen pose on the front sidewalk. (Courtesy of Indiana Historical Society, Bass Photo Company #27561)

According to a report prepared for the Indianapolis Chamber of Commerce in 1917, the four substations were leased to the city for about $1,000 per year. “Desk men” (possibly the man standing on the step) were paid $3.25 per day to answer telephone calls. Two of the stations employed four bicycle patrolmen, alternating on twelve-hour shifts. These men, who worked in pairs, answered emergency calls in the area.  The report, prepared by the Bureau of Municipal Research in New York City, recommended moving the substations to nearby fire stations, a move which would save over $8,000 yearly by removing the need for the desk men. It appears that the city followed the advice of the consultants and by 1920 this substation removed to the fire station across the street and was then known as the Fountain Square Substation. 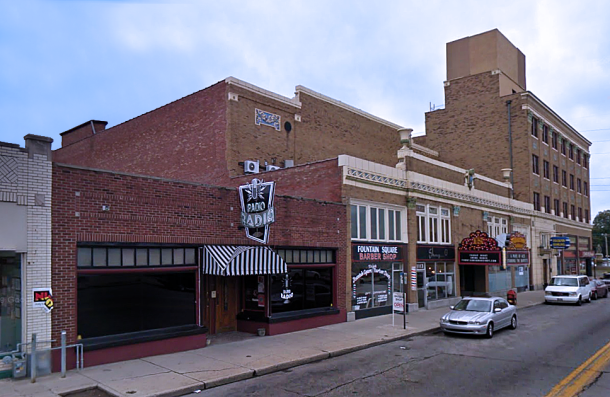 After the police station left, the little cottage once again became a home until it was razed in the late 1920s to make way for a one-story concrete block and brick commercial building adjacent to the Fountain Square Theatre. It housed a variety of businesses through the years, including the Standard Grocery Company in the 1930s,  Davis Cleaners (1940s-1950s), Fashion Cleaners (1959), Shorty’s Bike Shop (1960s-1970s), and the Fountain of Mystery Books (1980s-1990s)–a bookstore specializing in mystery books. Today the building is home to Radio Radio, an intimate concert venue owned by musician David “Tufty” Clough (Toxic Reasons and Zero Boys). The bar (named after an Elvis Costello song) has a comfortable, smoke-free lounge with a retro vibe and features top-notch local and national acts.

Do you have cool older photographs of Indianapolis buildings? Let us feature them in this Then and Now column! Send a high-resolution scan and any details about the building to thenandnow@historicindianapolis.com or contact us and we’ll scan them for you. Thanks!