Half of a stereoview of Fourth Presbyterian Church on East 9th Street, then named Pratt Street. Photographed by Charles S. Judd, Indianapolis, ca. 1875 (The Indiana Album: Loaned by Joan Hostetler)

Finding photographs of Indianapolis prior to the 1880s is challenging. Between 1839 and 1860, photography consisted mainly of one-of-a-kind photographic processes known as daguerreotypes, ambrotypes, and tintypes. These images were made on copper, glass, and sheet iron and most daguerreian artists or ambrotypists specialized in portraiture. Paper photography was popularized in the late 1850s and multiple prints could be made from the glass negatives. A few Indianapolis photographers made stereoviews of buildings and landscapes and they are highly prized today for the rare subject matter. Known local stereoview photographers include John Pendergast, William Salter, William H. Potter, and Charles S. Judd, who made this view of the Fourth Presbyterian Church shortly after its construction in 1873-74. Although the mounted image is not dated, the year is narrowed to the mid-1870s since Judd only worked in the city for a few short years. 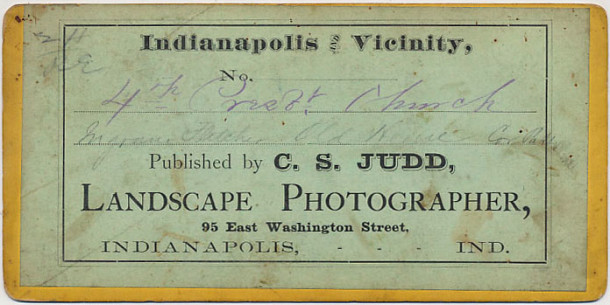 Reverse of stereoview with handwritten identification. (The Indiana Album)

Members of the Second Presbyterian Church organized the Fourth Presbyterian Church in 1851, constructing their first building on the southwest corner of Delaware and Market Streets. As members moved north, the congregation bought the residential property on the northwest corner of N. Pennsylvania and E. 9th (then Pratt) Streets from Ingram Fletcher, son of pioneer Calvin Fletcher. Fletcher requested that a memorial tablet be included in honor of his young son Newman Fletcher, who burned to death in a stable on the lot in 1870.  In June 1873 leaders accepted a plan submitted by architect Edwin May (who later designed the Indiana State House) to “erect a chapel on the back end of the lot, to front on Pratt street, and cost about $20,000.”  The main 90′ x 68′ room had a capacity for 300 people and was constructed in a circular shape. Fletcher’s stable and carriage house would remain and plans called for an addition at a later date. Work was to start immediately and to be “hurried through,” retaining existing trees and shrubs when possible and allowing for a fountain in the yard. The chapel was dedicated on 19 April 1874 and remained on this site until 1892 when the congregation moved north, yet again. In 1924, Fourth Presbyterian Church merged with Grace Presbyterian and was renamed the Fairview Presbyterian Church, still in existence today at 4609 N. Capitol Avenue. 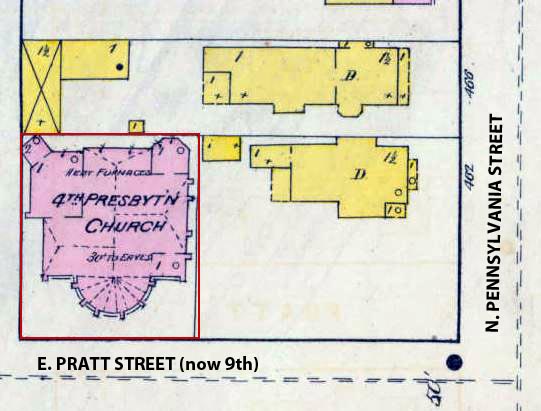 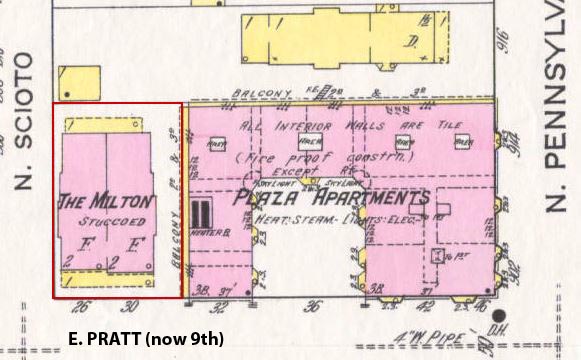 By 1915 the church had been demolished and the Milton Apartments stood on the lot. The Plaza Apartments were built circa 1907. (IUPUI University Library) 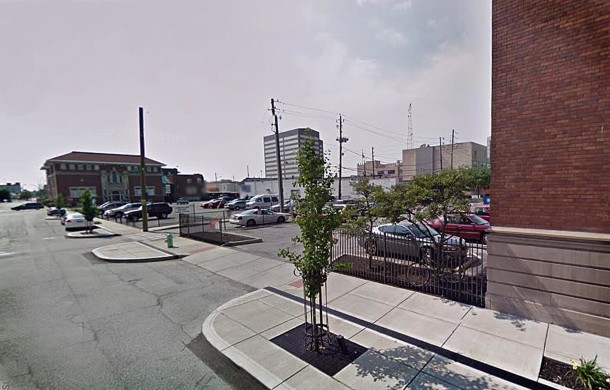 The Milton Apartments were demolished between 1941 and 1956 and today the lot serves as parking for the restored Plaza Apartments. 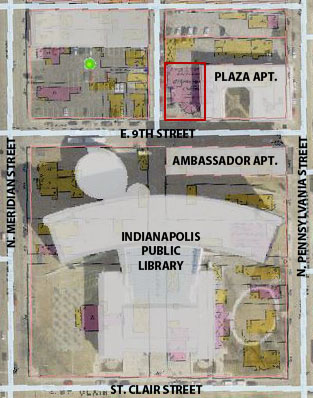