Freund’s Pharmacy as it appeared in about 1907-1908. The man in front is possibly William C. Freund. (The Indiana Album: Loaned by Joan Hostetler)

The property was developed in the 1860s by the heirs of Governor Noah Noble who owned farmland from College Avenue (then Noble Street) east to Arsenal Avenue, and between Washington and St. Clair Streets. This area had been the Noble and Davidson families’ home farm and orchard. Small lots were sold off and by the 1890s this block contained many frame houses and a corner of one-story wood frame stores, including Freund’s Pharmacy.

This quaint pharmacy on the northwest corner of E. Michigan and Highland Avenue, was operated by William C. Freund (1881-1947) from about 1907 until the early 1930s when he constructed a new building.  Freund graduated from the Purdue University School of Pharmacy in 1902 and worked in other Indianapolis drugstores before starting his own business. He was later assisted by his wife, Stella E. Albersmeier (1885-1964). Like most pharmacies of the era, the corner store also had a soda fountain and sold a variety of products. The “Anna Held Cigars” sign (seen under the front window) shows chorus girls from the Ziegfeld Follies of 1907. This narrows the date of the photo to after July 1907 when the first annual musical review was performed. The small store to the right houses the Ed Harkness grocery store. 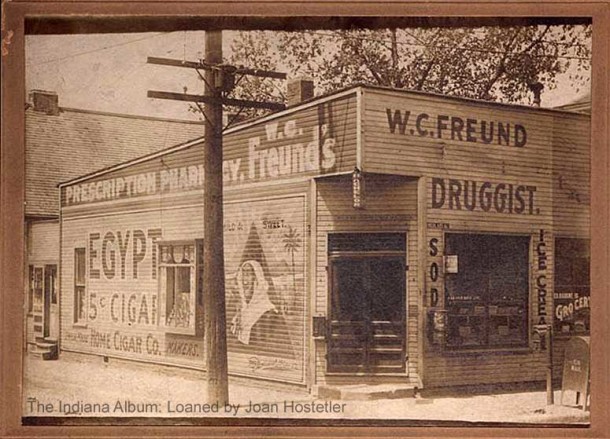 Another view of Freund’s Pharmacy from about 1907-1915. The store was later named Highland Cut Rate Pharmacy. (The Indiana Album: Loaned by Joan Hostetler)

Traveling artists painted advertisements and murals such as this one promoting the Egypt 5 cent cigar. Other signs painted on the building advertise soda and ice cream. Freund’s ads stated that this was the “Gateway to the Eastside.” 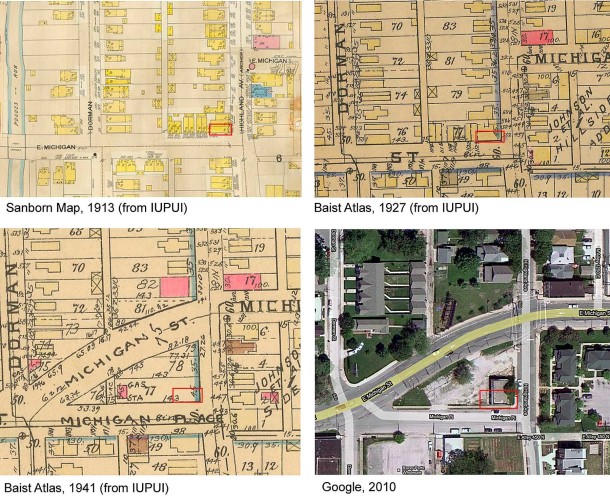 As the city grew and platted former farms, a crazy quilt-type pattern sometimes caused streets to zigzag with hard-to-manuever turns. That can be seen here as Michigan Street took a sharp left turn at Highland in front of Freund’s store, continued a half block north, then turned east again. This was a trolley driver’s nightmare after the Michigan streetcar line was built on Michigan Street in 1895 and streetcars easily derailed at these tricky turns (made even worse, according to an old neighbor, by pranksters who greased the rails just to watch the chaos). 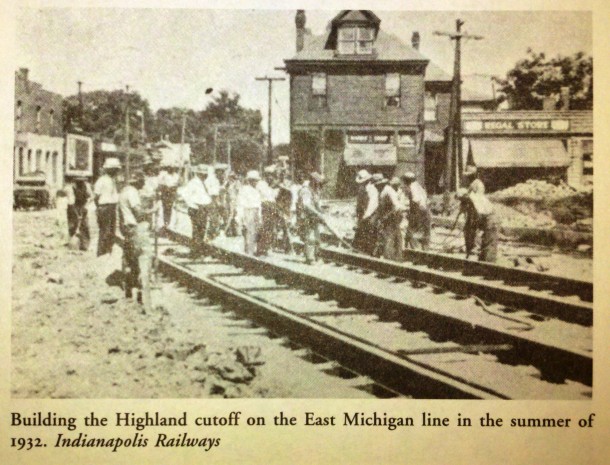 Finally in the 1932, the trolley company gave the street a more gradual curve, resulting in a triangle of land between Michigan Street, Highland Avenue, and the newly named Michigan Place. Freund, upset that this took people away from his corner business, threatened to sue the streetcar company, however it all worked out in the end when he built a new drugstore a half block north on Highland and continued in business for several more decades. By 1941 all of the structures in the triangle area were gone and replaced by a filling station.

Advertisement for the later Freund’s Pharmacy from the 1948 Arsenal Cannon yearbook. Although this was a half block north of the original site, Freund retained the original address of 502 N. Highland Avenue. This business later became Steinberger’s Pharmacy, a popular hang-out for students at the nearby Arsenal Technical High School. This building was demolished in the 1970s. (Indianapolis Public Library/Arsenal Technical High School Collection)

By 1985 the sole building on the triangle site, a one-story block former gas station, housed a metal recycling shop and it was common to see pickers lined up outside with scrap metal heaping out of their grocery carts. For years neighbors have hoped for a community-friendly use for the site. One dreamed of a coffee shop and a youth gardening group hoped to buy the site, but the deal somehow never materialized. Many have concerns about underground gasoline tanks, but some of the tanks were removed several years ago. As the area bounces back with the recent opening of Flat12 Bierwerks, Smoking Goose Meatery, and the adjacent Growing Places Indy farm, here’s hoping that this triangle will find another use in the near future.

Then and Now: 30th and Illinois – The Children’s Museum of Indianapolis