Among a group of old photographs found in the attic of an Indianapolis home were these three faded snapshots identified as the 1900 Indiana State Fair. Many people might have tossed the small, poorly processed, dog-earred prints, but luckily Elizabeth Robb saved them and when assembled through the magic of Photoshop they blend together to become the earliest known panoramic photograph of the Indiana State Fairgrounds.

The Indiana State Fair had only been held at the new location at E. 38th Street and Fall Creek Parkway for eight years when this unknown amateur photographer attended on September 20, 1900. First held in 1852 in what is now Military Park, the fair was an immediate draw for people throughout the state. Hoosiers have proudly displayed their steam engines, sorghum jelly, needlework, devil’s food cake, sculpted butter statues, oversized hogs, and even babies as the fair moved from Military Park, to cities throughout Indiana–Lafayette (1853), Madison (1854), New Albany (1859), Fort Wayne (1865), and Terre Haute (1867), to Camp Morton, and in 1892 to the current location.

Always more profitable in the capital city, in 1860 the Indiana State Board of Agriculture purchased Otis Grove near Alabama and 19th Streets in what is now Herron-Morton Place Neighborhood. During the Civil War, the fairgrounds were used as Camp Morton, first a recruiting and training site and eventually a Confederate prisoner-of-war camp, but after the war the State Fair once again returned to the site, expanding with an Exposition Hall in 1873. The grounds expanded to 56 acres, but the growing fair needed more space. By the late 1880s, the city had grown-up around the once-remote northside fairgrounds and it became difficult for exhibitors to transport their livestock from the downtown railroads through nice residential neighborhoods. After considering four sites (and accusations of bribery to sway the selection committee), the Board of Agriculture purchased the farmland of Mrs. Theresa Voss Smith, commonly called the Voss farm. Smith’s realtor brother Jay G. Voss handled the transaction. 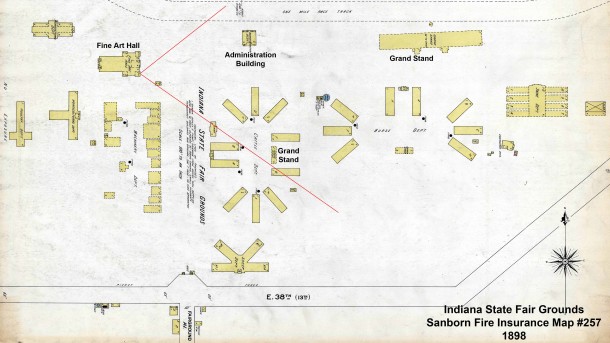 1898 Sanborn Map #257 of the Indiana State Fair Grounds (Courtesy of Indiana University). The red lines show the vantage point of the photographer as he took snapshots looking east in 1900.

A law prohibited the Board of Agriculture from owning more than 80 acres, so they purchased up to their limit and leased the other 134 acres for a few years until the general assembly gave approval to buy all of the land. The Indiana Farmer magazine described the 214-acre tract as a beautiful site, nearly level with a handsome park of young timber set in blue grass on the western half. Particularly appealing during the selection process was the farm’s proximity to transportation, including the Monon Railway on the west  and the Lake Erie and Western Railway to the east. Trolley tracks were still a mile away from the grounds, but  by 1893 the tracks had been extended. Eventually a streetcar turn-around and loading area was constructed on the grounds east of  the 38th Street entrance.

J. F. Alexander and Son, architects from Lafayette, Indiana, and Peoria, Illinois, laid out the grounds and supervised construction of the original 72 wood frame buildings, walks, drives, and the one-mile horse track with a 6,000-seat grandstand. After a busy summer of construction, the first fair opened on the new grounds on September 19, 1892.

Composite panoramic view of the Indiana State Fair, 1900. The three faded snapshots shown above were merged and enhanced in 2014 to create this panoramic view looking east. Although the image is soft-focused, it is an amazing early view of the fair. Click photo above to to enlarge, then use the magnifying glass to zoom in. (The Indiana Album: Loaned by Elizabeth Robb)

In 1900 the fair opened on September 18 and the Indianapolis Journal stated that over 5,000 people attended on the first day, which was dedicated to old soldiers and children. Streetcars ran at intervals of one minute. The unknown amateur photographer attended that year and climbed up the stairs in the corner tower of the Fine Art Hall and took three views looking east. To the left a crowd watches activities near the one-mile track. In the distance are dozens of white tents, perhaps connected to the soldiers’ activities. The large white structure near the track is the Administration Building and beyond that is the grandstand. The center view captured a military procession on what is today known as Main Street. A crowd, wearing the Victorian finery of the day with long sleeves, hats, suits, and an occasional parasol, meanders along the streets and in a central grassy area. When the photographer pivoted right he captured a small white structure with a porch, the water tower, and several of the radiating cattle department barns and the grandstand facing the central show ring. 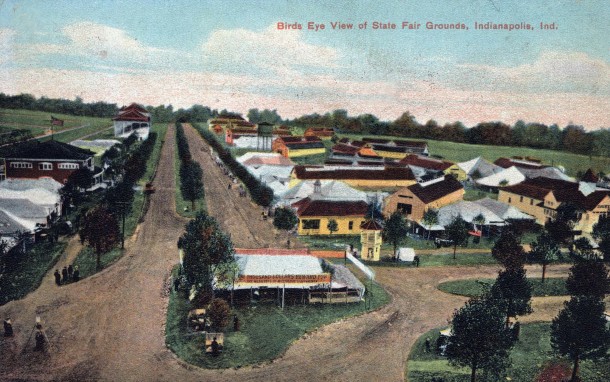 Less than a decade later, this postcard (likely taken from the same window of the Fine Art Hall, which was demolished in 1918) captures the same view. Although postmarked 1908, it appears that the photograph was taken before the 1907 construction of the large new coliseum on Main Street. 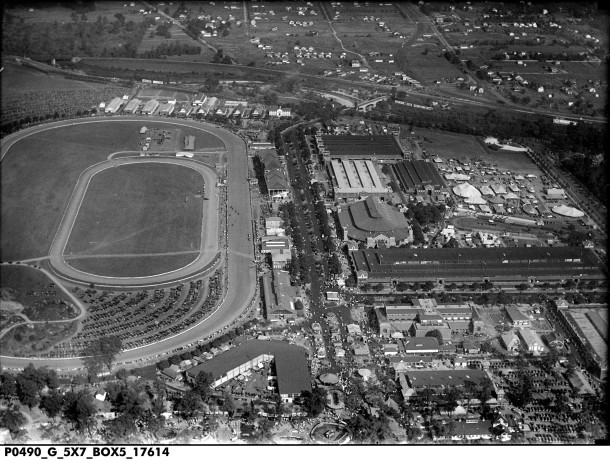 By the time J. C. Allen and Son shot this aerial photograph in 1928, the fairgrounds had modernized with many new brick buildings, including the Poultry Building, Red Cross Building, Administration Headquarters, and the Better Baby Building.  The Indiana State Board of Agriculture was replaced by the Indiana State Fair Board in 1925 and they continue to oversee the fair at this site to the present. 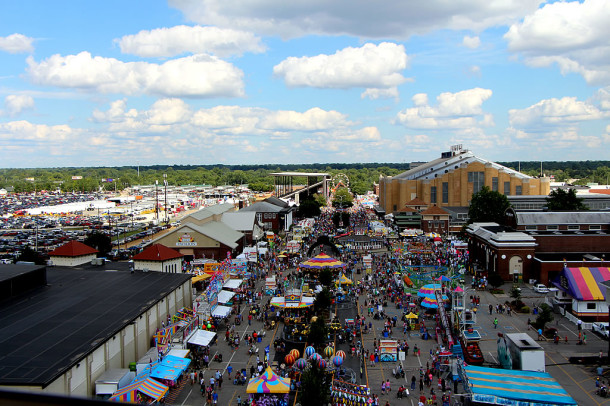 Similar view taken from the ferris wheel in 2013. (Courtesy of AroundIndy.com staff)

CONTEST: We could not locate a current rights-free, bird’s-eye view of the fairgrounds looking east and could not shoot our own photo since the Indiana State Fair does not start until August 1, so here is your challenge: Email us your best photograph looking east onto Main Street from the ferris wheel or other point that best matches the “then” photos and we’ll choose our favorite for inclusion as the “now” photograph. Whoever submits the winning photograph will receive a copy of the Indianapolis Then and Now book autographed by author Nelson Price, photographer Garry Chilluffo, and photo historian Joan Hostetler. The photograph must be taken by the submitter and we’ll gladly credit the photographer. Submit your photograph to hostetler@indy.rr.com by August 19. Have fun at the fair, which runs from August 1 through 17, 2014! (UPDATE: AroundIndy.com generously shared their 2013 view, but we are still holding the contest for the best 2014 photograph.)