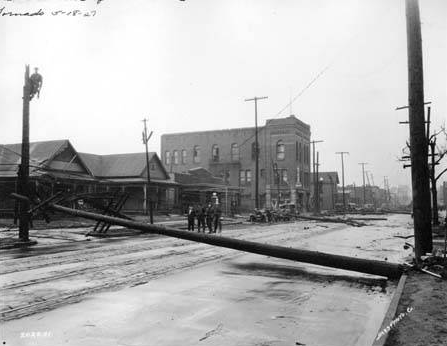 In May 1927 a tornado slammed into the east side of Indianapolis destroying dozens of buildings. This photo, looking east on East Washington Street toward the intersection of Hamilton Avenue, shows some of the damage and downed power lines. The three-story brick structure in the distance was home to the International Order of Odd Fellows Capital Lodge #124. The circa 1900 building had banquet rooms on the second floor, and a lodge hall, dressing rooms, ceremonial space, and stage (still intact) on the third floor. Through the years, the commercial rooms on the first floor housed restaurants, drug stores, bars from the 1970s until about 2005 (including California Nites), and more recently an architectural salvage store. (Indiana Historical Society, Bass Photo Company, #202201, May 18, 1927) 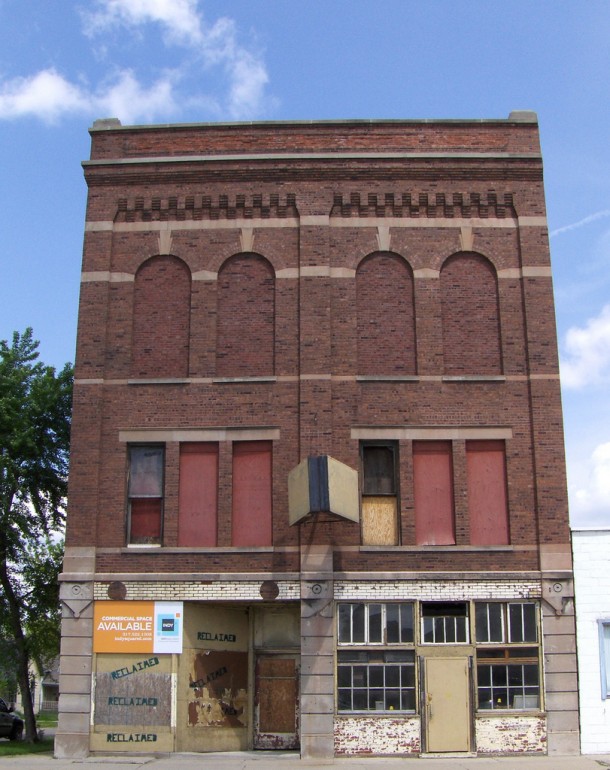 The IOOF Lodge as it looked in 2009 (Photograph courtesy of Sandra Jarvis, IndySQUARED.com

Today the old IOOF lodge building is empty, but you can expect to see renewed interest in East Washington Street in the near future. In March the area between I-65/70 (near Angie’s List) and Sherman Avenue becomes the newest FOCUS corridor, with the goal of jumpstarting commercial development. FOCUS, which stands for Fostering Commercial Urban Strategies, is driven by a partnership between LISC (Local Initiatives Support Corporation), the Central Indiana Chamber of Commerce, the Indianapolis Coalition for Neighborhood Development, and the City of Indianapolis.  A Washington Street project director begins in March, working for a partnership of the Englewood CDC, SEND (Southeast Neighborhood Development) and I-AD (IndyEast Asset Development).