Part of the charm of historic Irvington, a suburban town platted east of Indianapolis in 1870, is the winding, tree-lined streets and two circles on Audubon Road. Butler College graduate and Irvington resident Vida Tibbett Cottman wrote in 1912: “The first street in town to be graded and graveled was Audubon road, then called Central avenue. The two circles on this street make it unique. The circle south was designed for a park, set out with trees and a statue of Washington Irving was to grace its center. The north circle was given to the town with the understanding that a young ladies’ seminary was to be erected there within ten years or the land would revert to the owner. A fountain occupies the place designed for an Irving statue and the home of J. D. Forrest fills the circle north.” 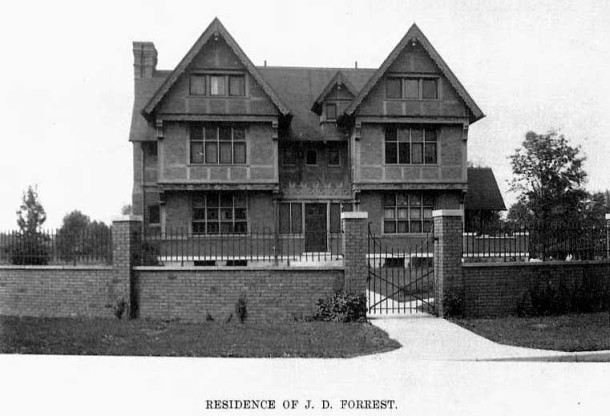 James Dorsey Forrest (1866-1930), a Baltimore native, took a position in 1897, at Butler College, then located in Irvington. After studying at Hiram College, Ohio State University, and the University of Chicago where he received a Ph.D. in sociology, he was well qualified to become professor of sociology and economics. His equally accomplished wife, Albertina Allen Forrest (1872-1904) also taught at Butler. Her life was cut short in 1904, when she died unexpectedly at age 32, while vacationing in Seabreeze, Florida. Her mourning husband commissioned one of the most expressive memorials for her at Crown Hill Cemetery. The Greek-style granite structure features benches, Ionic columns supporting a pediment, and a bronze sculpture of a kneeling woman. Sculptor Rudolph Schwarz created the bronze “Woman in Repose” statue as a permanent mourner for Albertina Allen Forrest, who author and clubwoman Grace Julian Clarke later described as “one of the most remarkable women I have ever known.”

Within a few years Forrest was living in a large brick Tudor Revival-style house constructed in 1906 in the southern portion of the circle at 30 N. Audubon Road. He resigned his chair at Butler in 1909 to become president of the Citizens Gas Company. Living with him were his mother-in-law, Mrs. Cornelia K. Allen, and sister-in-law Cornelia Adele Allen, an English instructor at Butler. Two days after Mrs. Allen died in the home on September 21, 1911, Forrest and his sister-in-law went to Akron, Ohio, to be married by a justice of the peace. A local newspaper reported that they had returned and were receiving friends, but this appears to have been a marriage of appearances only. Three years later the couple confessed in court that they married for sentimental reasons and both had wished to remain in the house. To avoid societal criticism, they married, but “with the understanding that the marriage should never be consummated.” Judge Remster ruled that they were never married, despite the fact that the marriage ceremony was legal and they had lived together in the same palatial house. Both remarried within a few years.

The house at 30 N. Audubon Road is seen in this 1916 Baist Map (courtesy of IndyMaps/Brownfields) and a recent aerial photograph.

Butler College president Thomas Carr Howe purchased the house in 1914 and lived there for a decade before selling it to the Irvington United Methodist Church in 1924. Architect Herbert Foltz designed an addition, which was constructed north of the original house and the $218,574 church was dedicated in September 1926. In the aerial photograph above, the original house is visible on the south, overshadowed by the 1924-26 church, as well as 1957 and 1962 additions.

Today the Irvington United Methodist Church is known locally as the “church on the circle” and the 1906 house portion greets visitors as they turn off of E. Washington Street onto Audubon. Its original occupant, Jacob Dorsey Forrest, lies near his wife’s large memorial at Crown Hill Cemetery in an unmarked grave.