Today a drive on South Meridian Street between McCarty and Morris Streets gives few hints that this stretch was once a vital commercial corridor heavily populated by the Jewish community. In the past one could buy nearly any product or service desired, from live chickens, to dry goods, to some of the city’s best pastries and rolls sold by local restaurants and hotels.

Kraft’s South Side Baking Company during World War II, Courtesy of IUPUI Universary Library, Neighborhood of Saturdays Collection. The old two-story house to the south (right) housed bakery offices, the older middle building was a retail store, and the newer building with the stepped roofline held large ovens and production facilities. A garage in back housed delivery trucks.

Kraft’s South Side Baking Company is one of the long-time businesses that occupied the 900 block of South Meridian Street (about one block south of Shapiro’s Deli and across the street from the Greek Islands restaurant). The bakery had roots in the South Side Bakery, owned by Isaac Regenstrief and a Mr. Wagner. In about 1923 the partners hired Philip Kraft, a young Romanian immigrant then living in New York, who brought his wife Bessie and child to Indianapolis where he delivered bread via horse-drawn wagons. In about 1932 the bakery founders had a falling out and could not decide who would buy out the other, so Kraft offered to buy out both and changed the name to Kraft’s South Side Baking Company. Wagner retired but in the days before the non-compete clause, Regenstrief opened a new bakery named Regen’s Baking Company a mere block from his old place.

Evidently the competition did not hurt Kraft who quickly grew the business. The company made specialty baked goods such as rye rolls, rye bread and hard rolls which were sold to Indianapolis restaurants and hotels in an era when most did not have in-house bakeries. Kraft’s bakery had six large brick-ovens at this point. In the late 1930s, Kraft expanded into pastries and cakes when he bought the DeLuxe Cake and Pastry Shop and 38th Street and College Avenue.

During the early months of World War II the bakery was approached by an Army major in charge of finding baked goods for local military camps, including Camp Atterbury, Fort Harrison, Stout Field, and passing through military troop trains. Business drastically changed as the bakery stopped making rolls for restaurants and worked 24/7 baking for the government facilities. Kraft converted part of his business into a dorm with bunk beds for his busy employees who worked around the clock to meet their government contract. He also consulted with Camp Atterbury when a bakery was built on site for hundreds of trainees and later prisoners of war held at the camp.

After the war ended, the baking company made a 180 degree turn and entered the supermarket business, supplying bread to Standard, A&P, and other local grocery stores. Workers above are seen wrapping, sealing, and dating the variety breads marketed under different brand names. The company also attempted to rebuild their restaurant and hotel supply business. The pastry business got a boost when the fifteen local Haags and Hooks drug stores within a five mile radius began ordering fresh doughnuts and pastries for their breakfast and lunch counters.  Eventually Kraft moved the pastry production from 38th and College to the South Meridian location.

By the 1950s the business employed over 150 employees and ran 35 DeLuxe Pastry Shops, now operated as independent shops leasing space from local grocery stores. Kraft was helped at times by his son Gerald Kraft (who supplied much of the information and photographs for this article) and also his son-in-law Benjamin Ashkenaz who worked for the company from 1951 through 1968. Wanting to slow down, in 1959 Kraft sold his grocery store pastry departments to John S. Clark, an independent baker. Clark decided not to renew each store lease and started building nearby, free-standing neighborhood bakeries which he named Roselyn Bakery.

Philip Kraft continued in the bread business for another decade, but due to poor health retired in 1968. He sold the bakery business to his former competitor, the Regen Baking Company, who moved the operation to their site a block north across the street.

In 1968 or 1969 Kraft sold the buildings to a wholesale plumbing company. The corner house that contained the bakery office was razed and is now a parking lot. As for today, as first glance it appears that the old bakery buildings have been replaced, but by studying aerial photographs and looking at different views at least one of the old buildings is visible behind the additions with blue metal siding. Looking from the north (below), the distinct facade with the stepped roofline is seen behind a newer addition in front. Through the years many businesses have come and gone and Universal Supply (wholesale heating and air conditioning parts) has occupied the site for the past five years.

Thanks to Gerald Kraft for sharing his memories of Kraft’s South Side Baking Company. I would like to feature more family-owned businesses and stores in the Indianapolis Then and Now column. Please contact heritagephotoservices@gmail.com to share memories or photographs.

Did your family own a local business? Tell us about it! 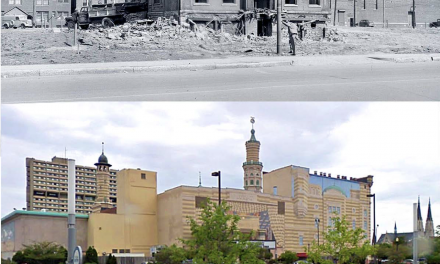