Indianapolis was expanding in all directions in the 1920s when the 46th and College Realty Company hired architects Pierre and Wright to design their new commercial shopping structure. In a 1927 article, an Indianapolis newspaper described the new building at 4601 N. College Avenue as “truly American” with English details. “The exterior is faced with Variegated Buff and Blue Indiana Limestone, layed in Broken Ashlar, relieved with a restricted amount of ornament and carving.”  (To zoom in on the image, check out the photograph on Ball State’s web site. )

The article stated that “our every day haunts are needlessly too ugly and commonplace” and stressed that the practical businessmen owners wanted a building that was pleasant to do business in. The owners felt that attractive surroundings helped the attitude, and therefore productivity, of employees and would draw quality merchants and customers.

As a side note, the adjacent house to the north (now a parking lot) was the home of photographer Walter J. Woodworth and family. Woodworth was  an early partner from about 1899-1905 in what is now W. H. Bass Photo Company, our city’s oldest photography studio. [Shameless plug–>I’m creating a directory of Indiana photographers and always welcome biographical and studio information about Hoosiers with ties to photography businesses.] 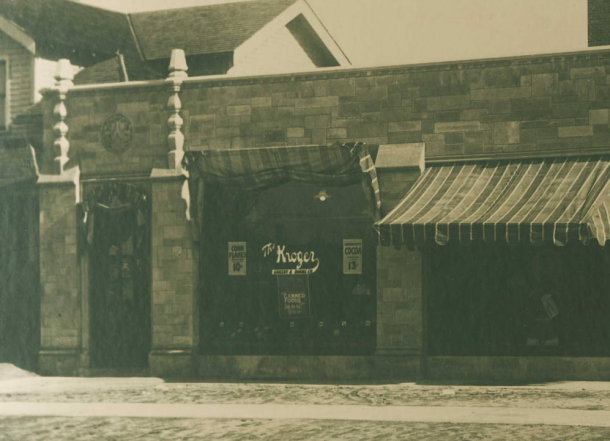 The October 1927  grand opening article states that it was “very gratifying to the owners to have the tenants on their own initiative draw up regulations regarding signs, awnings, and painting of the fronts. One National chain store refused to paint their usual color on their shop front as they felt it would mar the beauty of the building.” The Kroger Grocery & Bakery Company was one of the early tenants, but apparently did not stay long. A spot check in city directories reveals that the main space was occupied by a variety of drug stores, and more recently, antique and junk stores. 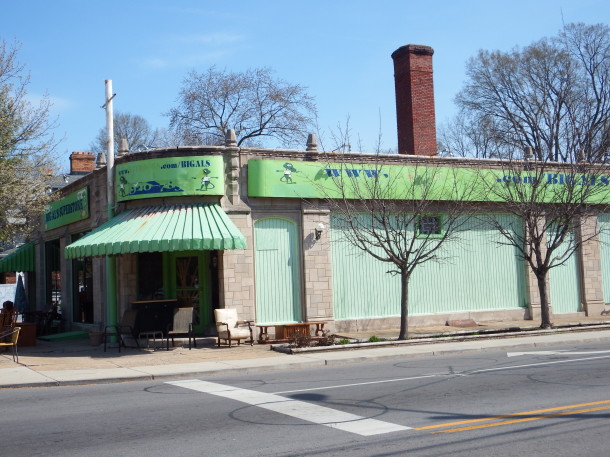 While several windows and doors have been filled in, and the bright green signage would likely offend the original tenants who did not want to detract from the building’s beauty, today the exterior remains largely as designed 85 years ago.