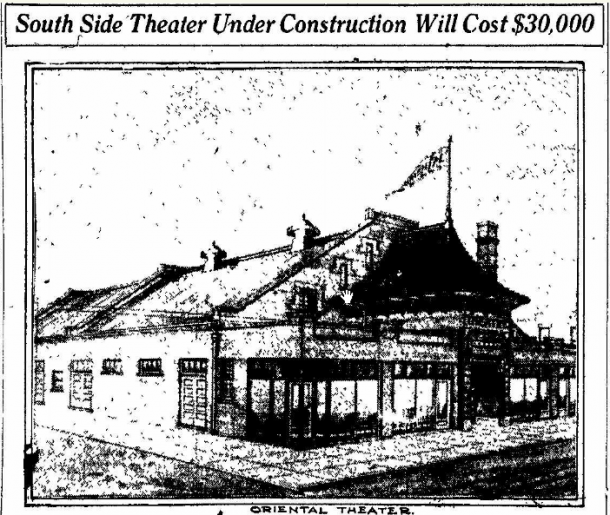 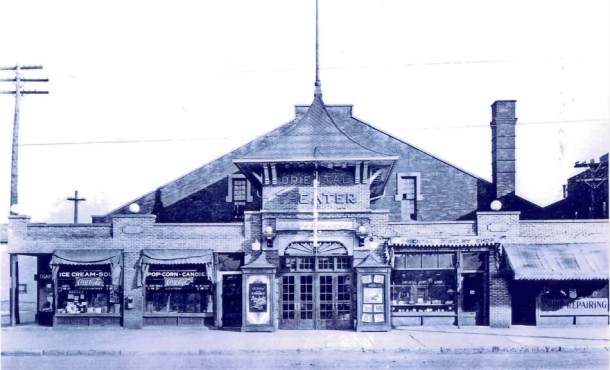 One of our city’s more interesting-looking theaters was the Oriental Theater. Owner Louis E. Burkhart built the fireproof brick building with a Pagoda-style entrance in 1910-11. It was located on the southeast corner of South Meridian and Wilkins Streets, just north of Morris Street. The theater, which originally showcased both vaudeville acts and movies, seated 725 when constructed, but later advertisements boasted seating for 1,600. The four storefronts housed a variety of businesses through the years including a drug store, Morris Yosha’s shoe repair shop, a wallpaper store, jeweler, and Frank Lichtenberger’s Confectionary.

The theater was in operation for over five decades and was razed by 1972 for an Interstate 70 ramp. This mash-up map shows an aerial photograph layered on top of an old Sanborn Fire Insurance Map of the Oriental Theater. 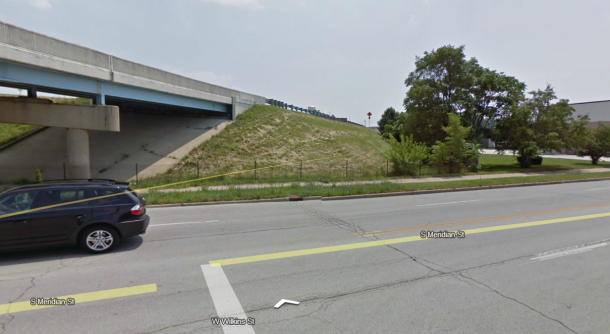 View looking east at the former Oriental Theater site. At least one piece of the old theater survives. The Oriental Theater’s Opus 512 pipe organ, manufactured by the Louisville Pipe Organ Company, was moved to the Calvary Lutheran Church (later known as the Tallwood Chapel) on Shelby Street in 1942. The organ was played until the 1970s, but then sat silent until recently purchased for use in the Strand Theatre in Shelbyville, Indiana.

How many of you Historic Indianapolis readers remember the Oriental Theater or the shops in front? Please share your memories!