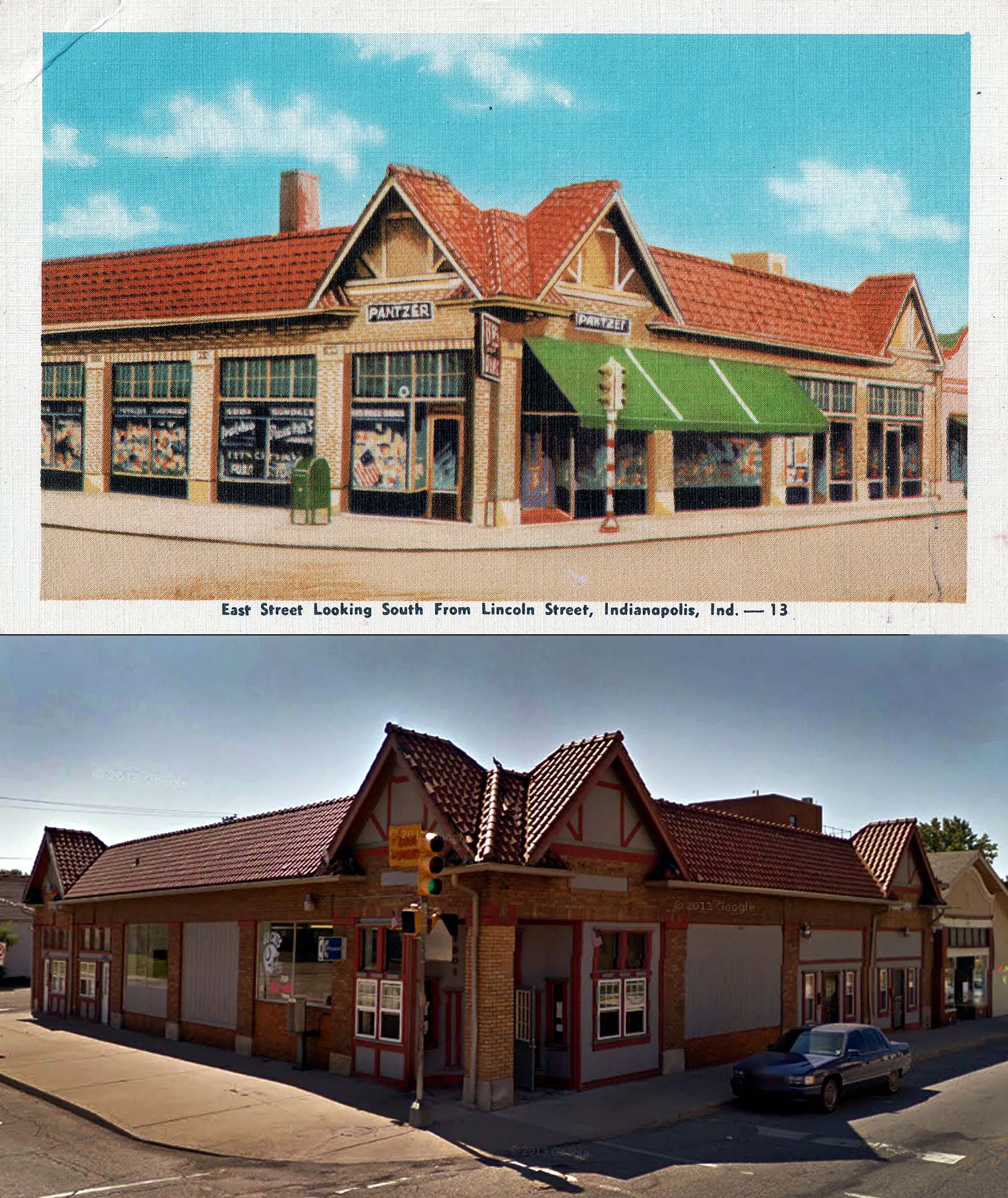 The corner store at 1601 S. East Street had a long life as the Pantzer Drugstore in what is now the Bates-Hendricks neighborhood on the southeast side of Indianapolis. John George Pantzer, Jr. (1869-1934) was born in Sheboygan, Wisconsin, but was one of the many German families in the medical field in Indianapolis. His older brother Hugo Otto Pantzer was a physician (and father of art collector and philanthropist Kurt Pantzer). Another brother, Frederick William, moved to Indianapolis and managed the Bates House Pharmacy but died in his late twenties. Meta, John’s other sibling who moved to Indianapolis, married Carl Lieber of the H. Lieber Company, an art supply store and gallery.

After a brief period of manufacturing “hypodermic and female syringes and abdominal supporters,” in 1898 the city directory first listed John G. Pantzer, Jr. as proprietor of a drugstore on the southeast corner of S. East and Lincoln Streets. For the first thirty-five years, Pantzer occupied a two-story frame store. The building was severely damaged in 1908 when a Garfield streetcar left the tracks on the curve and crashed into the building. None of the riders or the Pantzers, who were in their upstairs apartment at the time, were injured and the structure was repaired. Pantzer’s son John G. Pantzer, III (1897-1973) worked with his father and eventually became a pharmacist and took over the drugstore. John G. Pantzer, Jr. (the father) died in 1934. (Thanks to Evan Finch for allowing the use of his ca. 1930s linen postcard.) 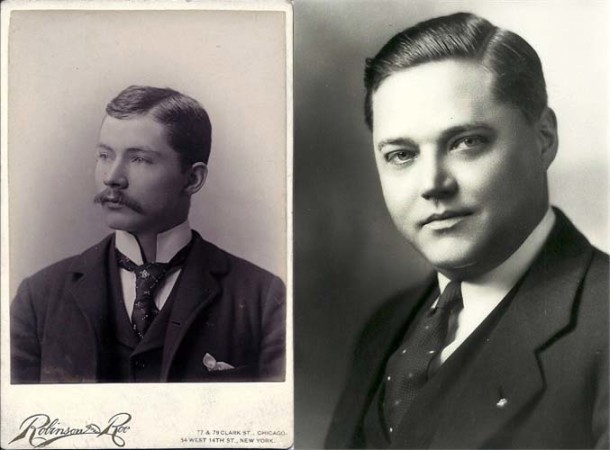 An undated newspaper clipping from ca. 1930 states that the business had been on the site continuously for thirty-five years, when the son (at this point known as John G. Pantzer, Jr.) constructed the present building. The yellow brick structure with a clay tile roof was built by the Southern Construction Company at the cost of $42,000, including new fixtures and a soda fountain. The drugstore occupied the center rooms with a corner entrance; offices facing Lincoln Street were leased to Dr. J. W. Elbert who had been on the site for several years; and storerooms were built south of the drugstore on East Street. Through the years the rentals were occupied by the Great A&P Tea Company (later A&P Food Store), Davis Cleaners, Blocker Propane Equipment Company, Yummy Yum Pizza, Kelly’s Cafe, and Katie’s Cafeteria.

During the excavation for the new building, the old frame store was elevated on jacks and continued operating. Later it was rolled to the back of the lot until the new structure was finished. 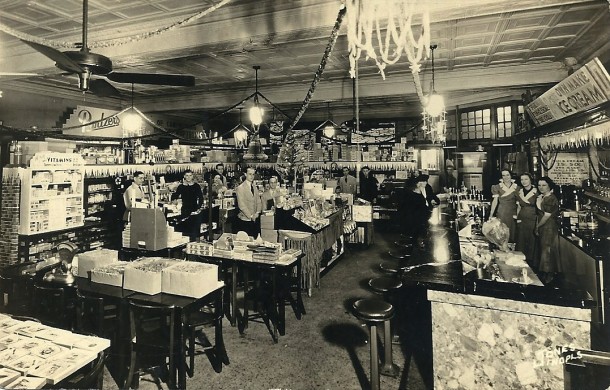 Interior of Pantzer’s Drugstore (from the ancestry.com page of Deborah Shadd)

This ca. late 1930s photograph shows employees and soda fountain customers in the new store, which is decorated for Christmas (click to enlarge). Pantzer stated that no expense would be spared to make the store “thoroughly modern in every respect.” 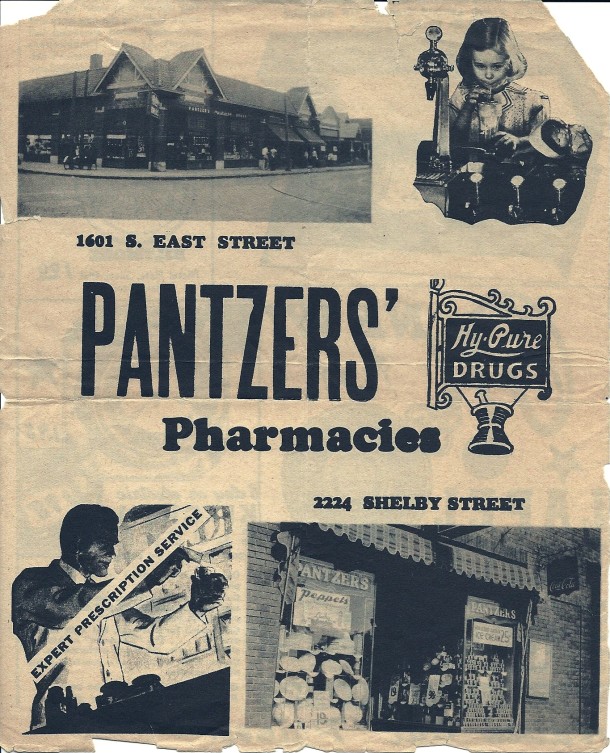 (Undated advertisement from the ancestry.com page of Deborah Shadd)

By the mid-1930s the drugstore was affiliated with the Hy-Pure Drugs brand and had opened a second store at 2224 Shelby Street. That building still stands south of the Suding Hardware. Eventually the Pantzer Drugstore became known as Teeter-Pantzer Drugs (by 1961) and Ralph G. Teeter operated the East Street store as Teeter’s Southside Pharmacy in the 1960s and 1970s. By 1979 the corner’s days as a drugstore had ended and the building was occupied by the R. A. Jurgen Company. 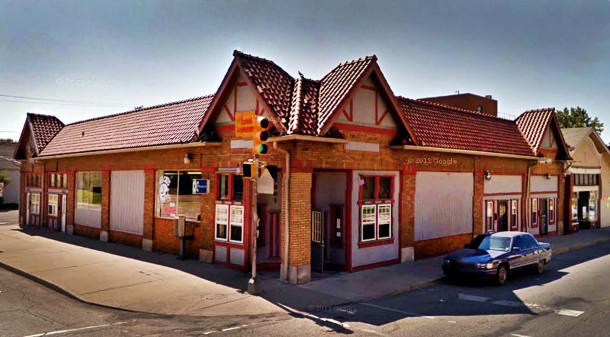 The building was home to the Royal Coin Laundry in 2011 when the car-mounted Google Street View camera rolled by. Today, many of the windows are boarded up or reduced and the black Vitrolite (dark pigmented glass) beneath the windows is gone, but fortunately the red tile roof survives and architecturally the building retains its original charm.

Thanks to Deborah Shadd, a descendant of John G. Pantzer, Jr.’s daughter Laura (Pantzer) Vollrath, for posting her family photographs on ancestry.com. If you have a subscription, you may click here to see her family tree.

Did your family operate a store or business in Indianapolis? We’d love to feature more mom-and-pop stores in the Indianapolis Then & Now column so let us hear from you.