What better way to promote your milk business than to construct a building flanked by two large milk bottles. Samuel O. Dungan, vice president and general manager of Polk Sanitary Milk Company, had the idea but family lore has it that he could not find contractors willing to build the unusual structure. One day he looked out his window and saw workers laying brick in a cistern. He asked if they could build it upside-down and above ground and this resulted in one of the most unique mimetic structures in Indianapolis. Mimetic buildings are a type of roadside architecture that mimic the product or service sold and bottles are a common building shape, particularly popular in the 1920s and ’30s. Polk’s milk bottle towers were made of white-glazed brick from Brazil, Indiana. A national architecture magazine praised the building, but thought they could have improved the design by including a band of yellow bricks to indicate a layer of cream near the top of the bottle.

The company started in 1872 when Civil War veteran James T. and Laura (Burdick) Polk began canning tomatoes in the kitchen of their Greenwood, Indiana home. Polk drove a horse-drawn buggy into Indianapolis to sell the canned goods to local restaurants, hotels, and the general public. Within a few years the Polks constructed a canning factory in Greenwood and gradually expanded the business to include several branch factories.

Having a large amount of scrap agricultural produce, the Polks purchased a herd of Holstein and Jersey cows in 1888 and sold the milk to Tanglewood Dairy Company in Indianapolis.  In the early 1890s Polk bought out the dairy. He brought his son-in-law and daughter, Samuel O. and Frances Pearl Dungan, from Detroit to manage the new dairy farm and milk company. According to the History of Johnson County (Bowen, 1913), the new business started at 613 E. 16th Street with one delivery wagon. Within eight years the company expanded to eighteen wagons and moved into a new $25,000 building on the corner of College Avenue and E. 16th Street.  By 1910 the company was so successful that it needed even more space and a compound of buildings was constructed on three-quarters of a block on the northeast corner of N. 15th and Lewis Streets. A private railroad spur entered the grounds to help move the 10,000 gallons of milk processed daily in 1913. Over 20,000 families purchased Polk’s Milk, which now had 65 delivery wagons.

Dungan, who had studied business, had a flare for promotion. Soon after the state-of-the-art milk plant opened at 15th and Lewis Streets, he supplied fifty-three decorated milk delivery wagons for the Indianapolis Trade Association parade. They were led by a fifteen-foot-tall float that replicated the new milk bottle building. Within a few years Dungan adapted the slogan “Polk’s Milk — Always Ahead” featuring the head of a dairy cow. (You can see a couple of Polk’s billboards in other “Then and Now” photographs:  16th and Illinois Streets. Over fifty years later, pop artist Andy Warhol used the logo in a silkscreen on cardboard print.) Education appears to have been part of the company’s mission, and through the years the business hosted public and school tours and lectures on nutrition and child nourishment. 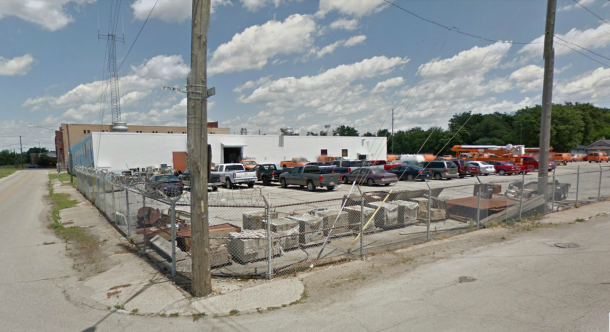 The milk company thrived, producing milk, butter, babies’ milk, and “Pok-o-lac,” their trademarked buttermilk. During World War I the company received a large contract to supply dairy products for the government and in the 1920s began canning grapefruit juice. The Dungans managed Polk’s Sanitary Milk Company until their deaths in the 1940s. Due in part to competition from food chains, the business experienced financial hardships in the 1950s and soon closed.

Indianapolis Public Schools acquired the old dairy and used it for maintenance and storage for several years before demolising it in 1967. IPS now uses the site as a parking lot. Fortunately, the brick, three-story stable building that housed Polk’s delivery horses still stands on Lewis Street (and is seen to the far left in the above photos). Today most joggers on the adjacent Monon Trail likely have no recollection of the whimsical milk bottle building that must have elicited chuckles from railroad passengers as the traveled through the city.