When the end was near for the delapidated Pyle House, newpaper writers looked back nostalgically at the former days when the building at 143 N. Meridian Street was a well-known inn. Situated north of Christ Church, the two frame buildings connected by a brick structure had formerly served as schools, a hotel, boarding house, and commercial building. 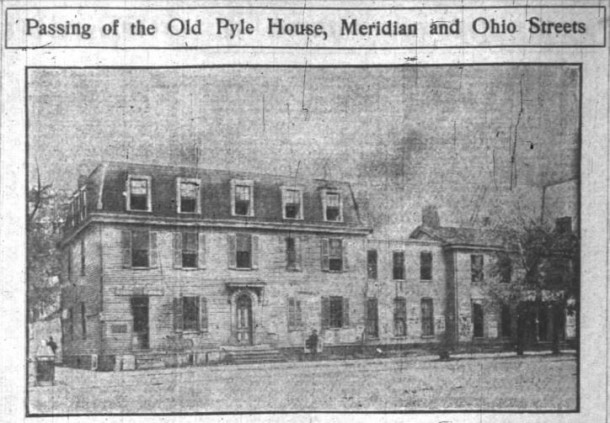 According to Jacob Dunn’s trustworthy but long-titled book Greater Indianapolis: The History, The Industries, The Institutions, and The People of a City of Homes (1910),  the building to the right (south) in this 1901 newspaper photograph served as a boarding house for attendees of an Episcopalian school. The school, located east of the first Christ Church building, operated in the 1840s and was variously known as the Young Ladies’ Seminary or St. Mary’s Seminary.  In 1850, members of the Methodist Church started the Indiana Female College and purchased the old Episcopal school boarding house property. Reverend Thomas S. Lynch oversaw the construction of the new, two-story school on the corner of Meridian and Ohio Streets. Each floor had four rooms. The Indiana Female College operated between 1850 and about 1865. At that time, boarding house owner John Pyle wanted to start a hotel and traded another property with the Methodist school managers. Pyle connected the old school and boarding house with a two-story brick structure and turned the three buildings into the Pyle House hotel and tavern.  Although he was only proprietor of the business until 1874, his name remained until the boarding house closed in 1901. Mrs. Sarah Porter took over management from Pyle and ran a respectable family hotel and dining room until 1890. Out-of-town legislators took up rooms when the assembly met and many young businessmen rented rooms in the boarding house. 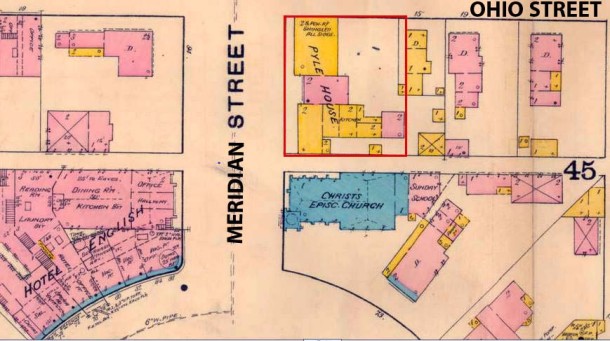 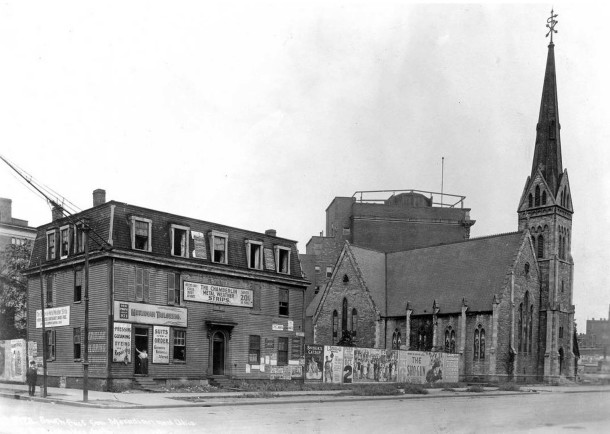 The last section of the Pyle House shortly before demolition in 1905. To the right is Christ Church, constructed in 1857, and in the background is a previous building of the Columbia Club. (Courtesy of the Indiana Historical Society, W. H. Bass Photo Company Collection)

All but the 1850 corner building was demolished in 1901 and the Indianapolis News reported: “The old Pyle house was one of the venerable landmarks of Indianapolis, and, standing at the portal to the northern part of the city, its shabby, weather-beaten wreckage of better days carried the mind way back to the primitive hotel and boarding house days in Indianapolis. As the signs indicate, during its last days, it was used by tinsmiths, clothes pressers and sign painters.” In 1904 the property belonged to the estate of Margaret Maus, whose heirs Frank Maus Fauvre, Madeline Maus, and Mrs. Joseph Schaf reportedly sold the increasingly valuable site for $100,000. In 1905 the Indianapolis Board of Trade signed a 99-year lease with the Federal Building Company and finally the remaining remnant of the Pyle House was razed. 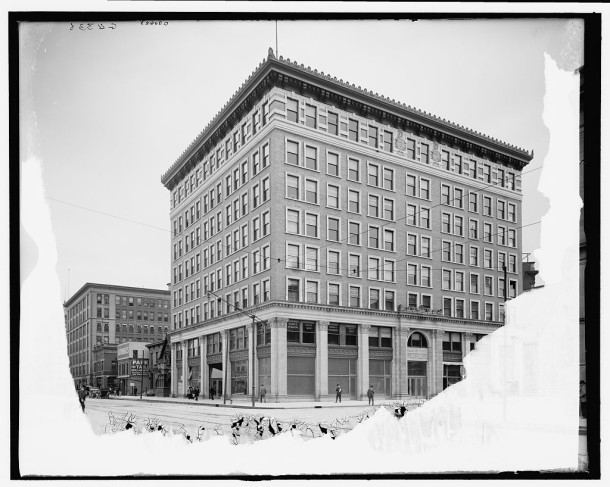 The Indianapolis Board of Trade (Courtesy of the Library of Congress, Detroit Publishing Company, ca. 1910)

In 1907 the Indianapolis Board of Trade moved into their spacious eight-story brick and concrete building on the site of the old Pyle House. Formed in 1853 by some of the city’s most prominent businessmen, the organization existed to promote the commercial interests of Indianapolis. By the 1870s the group had their own building north of St. John’s Church on the corner of Maryland Street and Capitol Avenue. Through the years the group promoted railroads, arbitrated trade agreements, championed business ethics, and consolidated the city’s many trade organizations into one group. They also published booster books such as the 1889 Industries of the City of Indianapolis. In 1977, high operating costs and decreased business activity in the dwindling downtown forced shareholders of the Board of Trade to dissolve the organization. American Fletcher National Bank (AFNB) had ambitious plans to construct a skyscraper so in February 1982 the Board of Trade building became a victim to progress (as had the Pyle House over 75 years earlier). 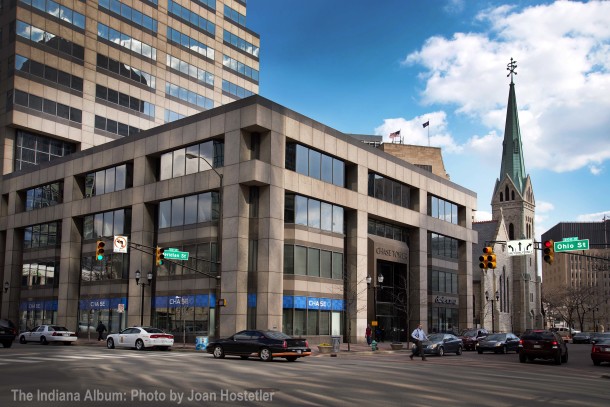 West wing of the Chase Tower (Courtesy of the Indiana Album: Photography by Joan Hostetler, 9 April 2014)

By the time the bank’s building broke ground in 1988, AFNB had been sold to Ohio-based Bank One. Upon completion, the 48-story skyscraper, still Indiana’s tallest, was named Bank One Center Tower. The two spires have earned the building the nickname “the plug-in building,” but few people know that one spire is a communications antenna and the other is purely for symmetry and decoration. After J. P. Morgan Chase & Company purchased Bank One in 2005, the tower was renamed Chase Tower.

Learn more about Chase Tower in Ryan Hamlett’s A Room with a View.