Sometimes these “then and now” columns get frustrating. When I discover a great old photograph of an unknown building, I check out the location on old maps and in aerial photos, then search the address on current sites such as Google Maps and too often find an empty lot or an ugly pole building. Sigh. So for my mental health I’m going to focus the next few weeks on existing buildings with happy endings or great potential, such as the neglected but wonderful Ritz Theatre. 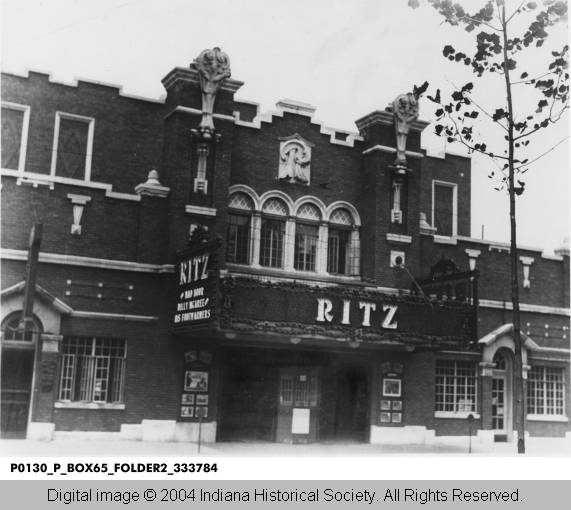 The Ritz Theatre at 3430 N. Illinois Street was constructed in 1926-1927 by Oscar Markum and Son, owners of four other Indianapolis theaters. It was designed by Indianapolis architect George V. Bedell, who began his career in the 1880s as a decorative spindle and trim maker. On a personal note, in the early 1890s he added onto my former cottage at 815 N. Highland Avenue which was owned then by his sister. In the 1980s I tracked down his elderly son who shared that his father designed many churches, houses, and four Indianapolis theaters: the Dream Theatre in Brightwood, the Tacoma Theatre on East Washington Street (now home to El Sol Restaurant), the Talbott Theatre at 21st and Talbott (now Talbott Street Nightclub), and the Ritz Theatre. The Ritz is brick and decorated with limestone carvings. When it first opened it had streetfront stores on either side of the central entrance and a separate smoking room with piped-in sound for the smokers. (Photo courtesy of the Indiana Historical Society, Bass Photo Company, negative 333784)

According to cinematreasures.org, the Ritz opened on February 22, 1927 with seating for 1,400. Just on the cusp of talking movies, the theater was equipped with a two-manual Geneva organ. After years of success as a neighborhood movie theater, it became known as the Northside Theatre in August of 1958 and had a short-lived stint as a burlesque site in the 1960s before complaints led the managers and strippers to court. In June 1970 the theater was remodeled. All of the seats were removed to make way for a rock concert venue called Middle Earth. The popular hang-out featured some big names such as Richie Havens, Frank Zappa, and Savoy Brown. The name was changed back to the Ritz Theatre in January 1972, but the concerts were unsuccessful and the Ritz closed in late 1972. 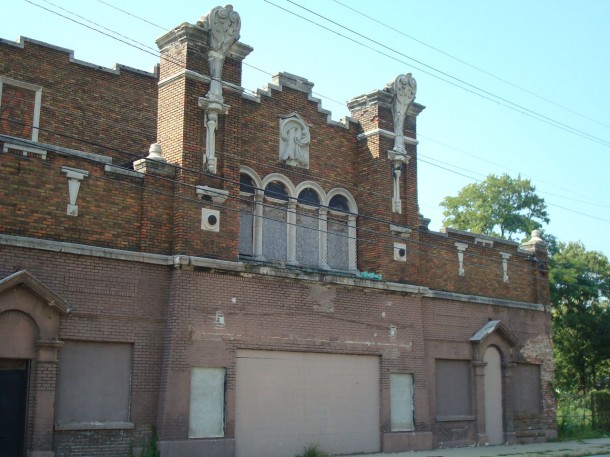 Today the marquee is gone, the windows are boarded up, and the theater has sat mainly empty since the early 1970s. People have cited the shaky neighborhood and the lack of parking as reasons the building has not been revived. Come on Indy, we are an urban area. Let’s get better public transportation, stop requiring so many parking spots, and bring back these neighborhood gems. (2008 photo courtesy of Kevin Kastner of Urban Indy, another great blog about our city. Check out his entry on the Ritz Theatre to see many more photos.)