While documenting the increasingly angry crowds during the 1913 streetcar strike, a photographer captured the corner of W. Georgia Street and S. Capitol Avenue–a block that played an early role in Catholic education in Indianapolis.

This view looks northeast at W. Georgia Street from the intersection of S. Capitol Avenue. Located directly south of St. John the Evangelist Catholic Church, these buildings served as Catholic schools and offices between 1859 and the 1970s and a rectory to the present. The L-shaped brick building on the corner (to the left) was constructed in 1858 as St. John’s Academy for Young Ladies. It was operated by the Sisters of Providence from St. Mary-of-the-Woods and an addition was built three years later due to increasing enrollment. The Sisters soon played another role during the Civil War, when Governor Oliver Morton requested the assistance of several sister-nurses, helped by students, teachers, and parish members, in managing the Military Hospital (City Hospital). By 1870 the supervisor and ten academy teachers instructed 325 female students. When a larger academy was built on W. Maryland Street in 1872, the former academy building saw various uses including a grade school for St. John’s Parish, a Catholic Workingmen’s Library, and housing for Brothers of the Sacred Heart.

To house their clergy, the church constructed the brick rectory (seen in the center in the photograph above) in 1863 and 1867 according to the plans of architect Diedrich A. Bohlen, who also designed the church. The west wing was added in 1878 as the residence of the Bishop of Vincennes. St. John’s School for Boys, operated by the Brothers of the Sacred Heart, was in the taller building to the right. The building was later known as St. John’s Hall. 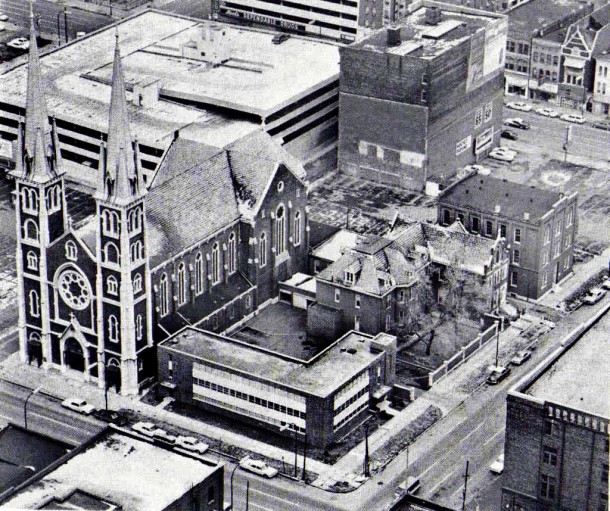 In 1963 the Chancery announced plans to demolish the pre-Civil War former academy building on Georgia Street to make way for a new, three-story administration building to house various archdiocesan offices. Wilhelm Construction built the modern brick and limestone structure. This 1964 photograph shows the recently completed building on the corner, as well as the rectory and the old Boys’ School, then home to The Criterion, the weekly publication of the Archdiocese of Indianapolis. 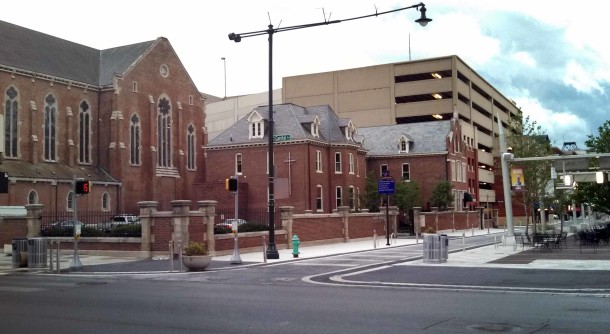 Photograph by Joan Hostetler, 18 June 2014. Georgia Street is to the right.

Although the downtown church campus is beautifully preserved and has been placed on the National Register of Historic Places, the 1963 administrative office building was razed to make way for parking in the early 1980s and the old Boys’ School/Criterion building removed by the late 1970s. The beautiful 1860s church and rectory survives, as does the historic brick fence. Tucked behind the fence is the St. John Courtyard, an outdoor space that serves as an extension of the church, hosting informal gatherings, cook-outs, and “St John’s Christkindl Village,” a live nativity at Christmas. The leaders have embraced their proximity to Georgia Street, a three-block cultural walkway that connects the Indiana Convention Center to Bankers Life Fieldhouse. In 2013 St. John’s celebrated 175 years of ministry in downtown Indianapolis. With their “Opening Wide the Doors” philosophy, the church welcomes a diverse group, from convention attendees, downtown professionals, the homeless, Colts fans, and traditional parishioners.

Read more about historic Georgia Street:
*See how St. John the Evangelist Catholic Church participated in the 2012 Super Bowl
*Learn about Georgia Street and the grassroots campaign to keep the historic street name
*Revisit the singing blacksmiths across the alley from the St. John’s School for Boys