Half of a circa 1876 stereoview looking south on Pennsylvania Street from Market Street (The Indiana Album: Loaned by Joan Hostetler)

Merely a decade after the end of the Civil War, photographer John W. Pendergast placed his camera on a tripod at the intersection of East Market and North Pennsylvania Streets, then dirt streets traveled by horse-drawn carriages and streetcars,  positioned the camera to look southeast, and captured this view of the east side of Pennsylvania Street. Based on his other stereoviews advertised on the back of the mount, the date was probably about 1875 or 1876.

Prominent buildings from left to right (between Market and Washington Streets):

1. The Post Office and Federal Building was constructed between 1857-1861 and designed by Ammi B. Young, supervising architect of the U.S. Treasury Department. Like his other custom houses and federal buildings, this Indianapolis structure was fireproof and had cast iron elements brought here from New York. Young designed many stone federal buildings throughout the country in the Greek Revival and Renaissance Revival styles. The U.S. District Court and the U.S. Circuit Court for the District of Indiana met here until 1905 when the current Federal Court House was completed. In December 1905, American National Bank (later American Fletcher National Bank) purchased the building for $400,000 and moved in a year later after thoroughly remodeling the interior. The building survived over 100 years and was demolished in 1963. In 1963-64 the Union Federal Savings and Loan Association built a modern, eight-story structure on the site. It was reskinned with mirrored glass and enameled steel panels in 1985 and currently is occupied by Huntington Bank.

2. The Talbott & New Block was begun in March 1862 and owned by W. H. Talbott and John C. New. The three-story brick block had many stores and offices, including William Selking’s Saloon and Billiard Hall, the art studio of Jacob Cox, and the offices of architect D. A. Bohlen. In June 1889, the federal government bought the building for $148,500 using it partially for government offices while renting out the remainder for commercial use and private offices. In 1921 the new Loew’s Palace Theater opened on the site, closing in April 1970 to make way for the current parking garage.

3. The Aetna Building at 21-25 N. Pennsylvania Street still stands as one of the city’s few antebellum buildings, although highly modified. It was constructed in 1859 for the Aetna Fire Insurance Company of Hartford, Connecticut. The insurance company and various branches occupied the first floor and rented out the other floors to businesses including Herman Lieber’s frame and art store. The large hall on the top floor was used as a drilling room by the Indianapolis National Guard and the Zouave Guards as the Civil War approached. From 1881 to 1894 the Indiana Dental College leased rooms. Alterations occurred in about 1900 with the additional of larger first- and second-floor windows and in about 1940 when the original Italianate front was replaced with an Art Deco limestone facade with the words “Insurance Center.” Today the first-floor tenant is Big Red Liquors.

4. The International Order of Odd Fellows Grand Lodge is the domed structure in the distance. The Second-Empire style building was designed by architect Francis Costigan and constructed in 1854. Needing more space, I.O.O.F. members voted to demolish the old building in 1907 and construct a new 14-story skyscraper on their prominent corner, then the tallest building in the state. First Federal Savings and Loan Association purchased the building in 1960 and changed the windows and added polished granite to the lower levels in 1963-1964. 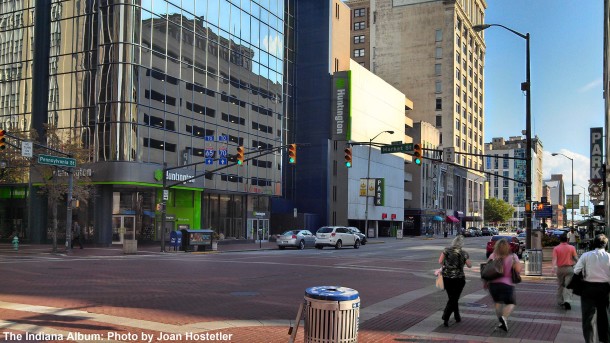 Like photographer Pendergast, I waited until afternoon when the sun best illuminated the west-facing buildings. But while he or his assistant had prepared several negatives by polishing the glass plates, mixed a clear collodion substance, coated the plate, dipped the negatives in silver nitrate (in the dark) to make them light sensitive, placed them in plate holders, and carried everything (and possibly a portable darkroom) a block from his Washington Street photographic gallery, I simply drove to the corner, luckily found a parking spot, a whipped out my digital camera phone to capture a few shots. I rushed to my car to beat the approaching “parking ambassador,” and downloaded the images at my leisure. But Pendergast had to shoot, develop, wash, and fix (in cyanide) his wet collodion plates within ten or so minutes from the time he first coated them or they would no longer be light sensitive. Next he had to touch-up and varnish the plates and get to the business of making prints on albumen (egg white) paper and mount them onto special cardstock stereoview mounts. While watching television I uploaded my digital photographs, enhanced and dodged and burned and sharpened them through the magic of Photoshop, and hoped that by the end of the day dozens of people would have liked and shared these images through social media. We do not know how many prints Pendergast made of this scene or how he marketed them. As time passes these buildings will continue to be demolished and altered, Pendergast’s rare but analog photographs will be found here and there and shared on eBay or donated to historical societies, and I suspect that my digital photographs won’t last more than a generation before being lost to careless deleting, technical obsolescence, or bit rot. Thus is the transient nature of life.

We want to find, copy, and share more stereoviews from Indianapolis. Check out this list of known stereoviews and contact us if you know of others! 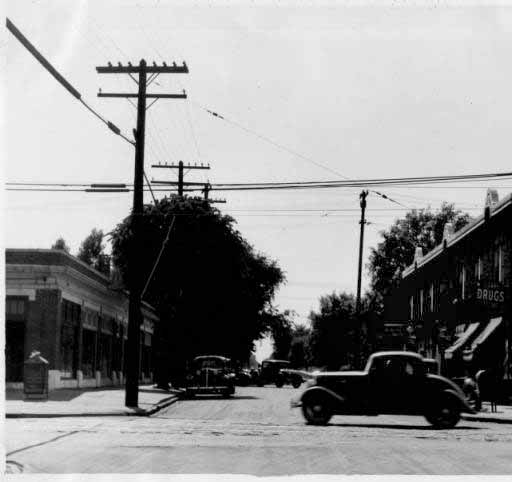