The L. S. Ayres cherub, one of the city’s most beloved little sculptures, makes its appearance every Thanksgiving eve and looks out over shoppers until Christmas.

The sculpture has its roots in drawings created for the 1946 catalog of L. S. Ayres, the city’s premier department store. Advertising artist Virginia Holmes used angel illustrations to fill space in the somewhat sparse, post-war catalog and they became a hit. With their 75th anniversary approaching in 1947, the store commissioned sculptor and Herron School of Art instructor David Rubens to create the thirty-six inch tall bronze sculpture. Employees unceremoniously placed the cherub upon their well-known clock at the corner of Washington and Meridian Streets on the day before Thanksgiving in 1947 and created a sensation. Through the years, generations of residents visited downtown during the holidays to enjoy the store’s decorated Christmas windows and take a peek at the angel, especially since it was a tradition for shoppers to “meet under the Ayres’ clock.” 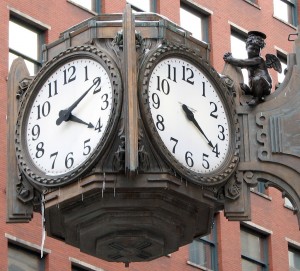 The May Company bought out L. S. Ayres in 1986 and moved the sculpture to their Saint Louis warehouse after closing the downtown store in January 1992. Administrators likely did not understand the fondness that Indianapolis folks had for the little cherub, nor did they anticipate the public outcry when they ignored the tradition and the clock sat lonely during the 1992 season. The anonymous mystery group  FTC (Free the Cherub) alerted the media and distributed bumper stickers reading, “Free the Cherub! Boycott Ayres!”  After hundreds of calls, passionate notes, letters to the editor, and even a poem lamenting the loss read by then-Mayor Stephen Goldsmith, the May Company finally gave in and returned the cherub to the city December 1992. Since 1993 it has again appeared yearly on the old Ayres’ clock. Today Carson Pirie Scott occupies the old Ayres building. The group Indy Downtown (previously Indianapolis Downtown, Inc.) is the guardian of the whimsical cherub which celebrates its 67th birthday in 2014.

All of us at Historic Indianapolis hope you and your loved ones enjoy your own holiday traditions! Thanks for all of your kind words, comments, and shared memories and photographs of Indianapolis.