If you’ve ever wanted to own a post-Civil War era house with a rich history, now is the time to buy the Tousey-Nichol house, better known as the Gatling Gun Club. After serving as a home (ca. 1869-1909), Knights of Columbus lodge (1909-1919), and the Gatling Gun Club (1919-2008), the structure is again on the market for $345,000 and awaits a developer with vision and the funds to turn back time and poor remodeling decisions that a century as a private men’s club can have on an old house. 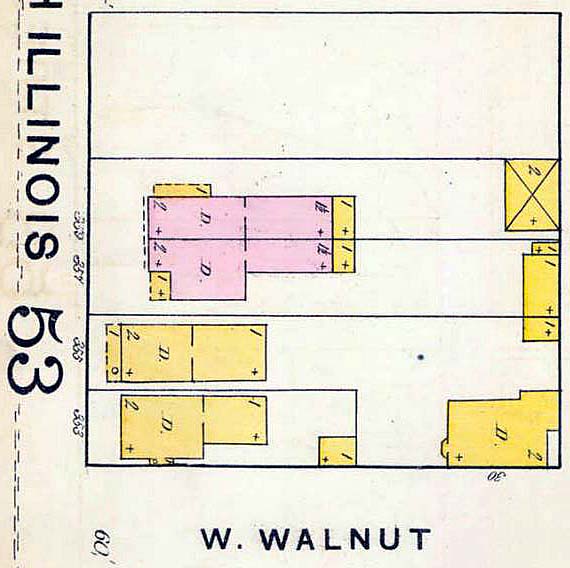 The Gatling Gun Club began as a 2-story brick home with side porches and an outbuilding plus a 2-story stable on the alley. (1887 Sanborn Fire Insurance Map #54, IUPUI University Library)

A definitive date for the Italianate double is unknown and, although newspaper and magazine articles repeat the oft-published construction decade as the 1850s, city directories support a late 1860s date. Italianate-style houses, known for hipped roofs, decorative brackets, and tall, hooded windows, were popular in Indiana between the late 1850s and 1890. Although a couple of unsourced books list the design as the work of prominent Indiana architect Francis Costigan (1810-1865), this house is likely confused with the Costigan-designed Oliver Tousey house that stood on Meridian Street. The earliest known occupants of 707-09 N. Illinois Street were the adult children of George Tousey, a Lawrenceburg native and early president of Indiana National Bank.  Woodford G. Tousey (known as “Wood”) and his wife Eudora Dunn Cady lived in the north half (then known as 359 N. Illinois Street), while sister Frances Tousey and husband James M. Nichol occupied the south half (originally 357 N. Illinois Street).

Woodford G.  Tousey (1843 – 1881) was frequently mentioned in Indianapolis newspapers and was just 26 when he and his young family moved into the house in about 1869. After serving as a Captain in the Civil War, he became a merchant, partnering with A. G. Lesh as a produce and commission merchant in the wholesale district. By 1872 he formed Tousey and Wiggins, pork and beef packers. Brother-in-law James M. Nichol worked as a clerk at Indiana National Bank and both couples were wealthy and well-connected in the city’s social and political circles, evidenced by their friendship with Governor James “Blue Jeans” Williams and ties to cousin and future governor Albert G. Porter. In April 1881, at the young age of 38, Wood died leaving his wife and children. The Indianapolis People reported that Tousey’s funeral was well attended and he was a genial, kindly gentleman. Shortly after his death, the Nichols’ moved out and the southern half was next occupied by the family of Charles G. Stewart, an editor at the Indianapolis Sentinel. Widow Eudora Tousey and family remained in the house until about 1900 and then rented out apartments to various families (including in 1906 to the Joseph M. Lobraico family, whose son Mike later founded the well-remembered Lobraico’s Drug Store in Broad Ripple).

In November 1909 the Knights of Columbus Home Association, a Catholic fraternal lodge, purchased the home for a new clubhouse. The building committee had planned to demolish the structure to construct a six-story, $80,000 new club, but fundraising issues appear to have squelched those dreams. Instead, a two-story auditorium was built onto the rear and the Greek-revival porch with a pedimented gable and six Ionic columns was added to the front. The Knights of Columbus only stayed here about a decade, moving their club in 1919 into the Bates-Allen-Parry-McGowan Mansion at 1305 N. Delaware Street that they purchased from Mrs. Hugh McGowan. The lodge never met its goal of constructing the grand six-story clubhouse, but unfortunately this move resulted in the demolition in 1963 of that grand mansion designed by architect William LeBaron Jenney–often said to be one of the finest houses in Indianapolis. 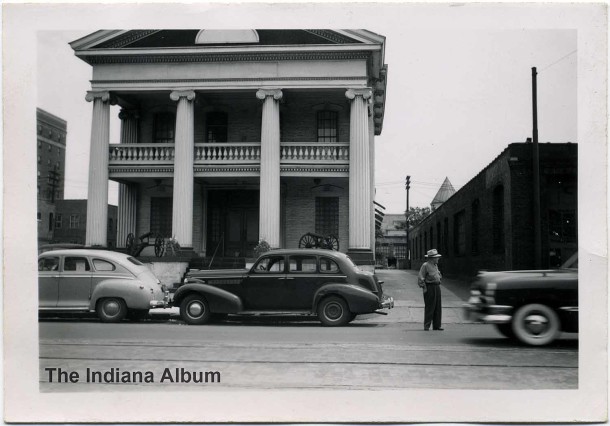 Circa 1940s snapshot of the Gatling Gun Club (The Indiana Album: Loaned by Joan Hostetler)

The Gatling Gun Club had roots dating to the 1890s when a professional drill team known as the “Boys in Blue” performed on the national vaudeville circuit. Wearing the exotic Zouave uniforms of the Civil War era, the team incorporated Gatling guns into their show. Richard Jordan Gatling of Indianapolis invented these rapid-fire weapons that had limited use during the Civil War. One shudders at the thought of using hand-cranked machine guns in stage performances, but the group performed for over a decade with little a problem until one evening in Canada a stagehand mixed up the trick blanks with live pistol cartridges containing fine bird shot, resulting in lawsuits when the audience was peppered during the climactic moment of the performance. This, along with the decline in popularity of vaudeville acts, resulted in the dissolution of the drill team in 1910. Former drill team member William Law, who was also a Shriner, decided to form a Shrine Zouave drill team using the “Boys in Blue” stage equipment and guns, thus the Gatling Gun Squad was formed in 1910. The group moved around and continued growing in number and by 1918 the rifle squad had 24 members with a 35 piece drum corps. In 1919 the organization secured an option to buy 707 N. Illinois Street from the Knights of Columbus. Members bought shares in the holding company and the name changed to the Gatling Gun Club when membership was opened to non-Shriners (men only, of course). 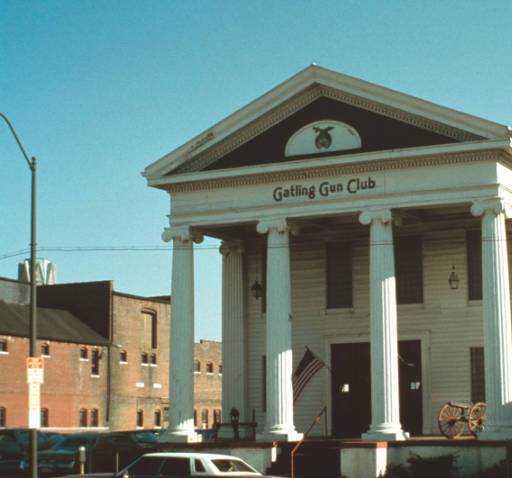 The membership swelled in the mid-century when fraternal lodges, smoky halls, sweetheart dances, and “$1.25 Shrimp Dinners” were popular throughout the country. Growth and improvements such as shag carpets, paneling, interior gutting, removal of the 1910s porch balcony, a brick facade with modern glass doors, and vinyl siding slowly removed or obscured the details of this 1860s brick house. 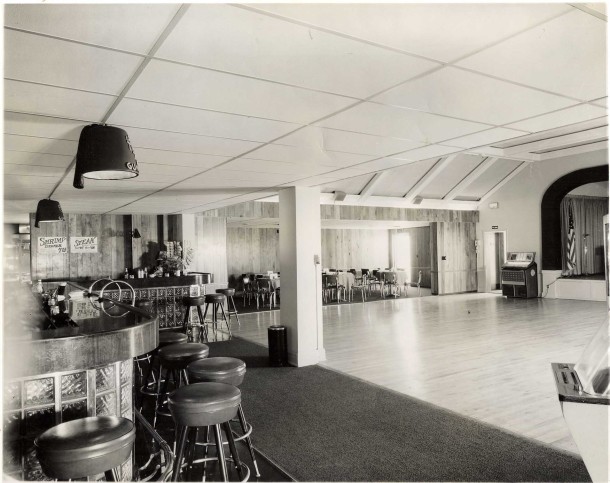 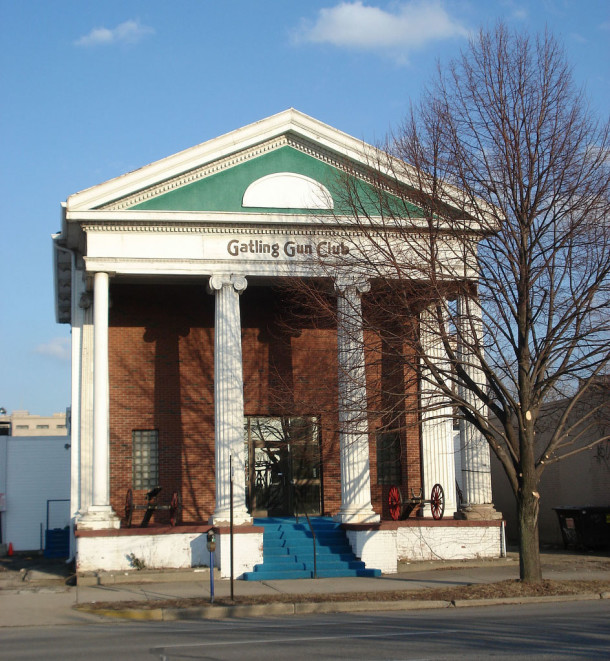 Gatling Gun Club in about 2009 (Photographed by Ange Bolton) 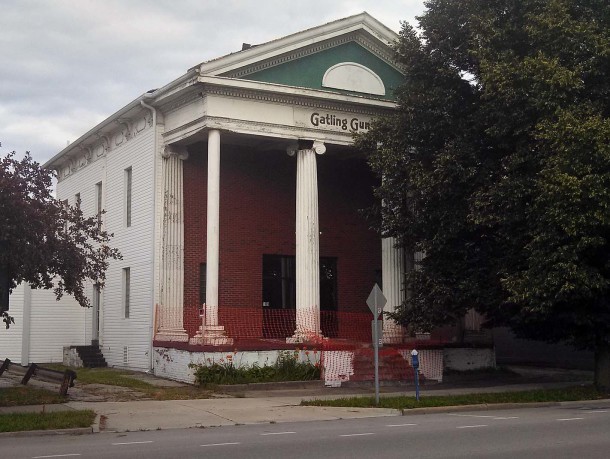 By 2009 the average age of the drill team squad was over 70 and interest in joining fraternal organizations was dwindling nationally, so the remaining members made the difficult decision to fold and sell their aging structure. The Gatling guns were acquired by the Ropkey Armor Museum in Crawfordsville, but are now in a private collection. The house sold at auction in 2010 to a local club owner who hoped to expand, but the renovation was too complicated and costly and the building is again on the market. Read this week’s Indianapolis Business Journal to learn about attempts to sell the structure.