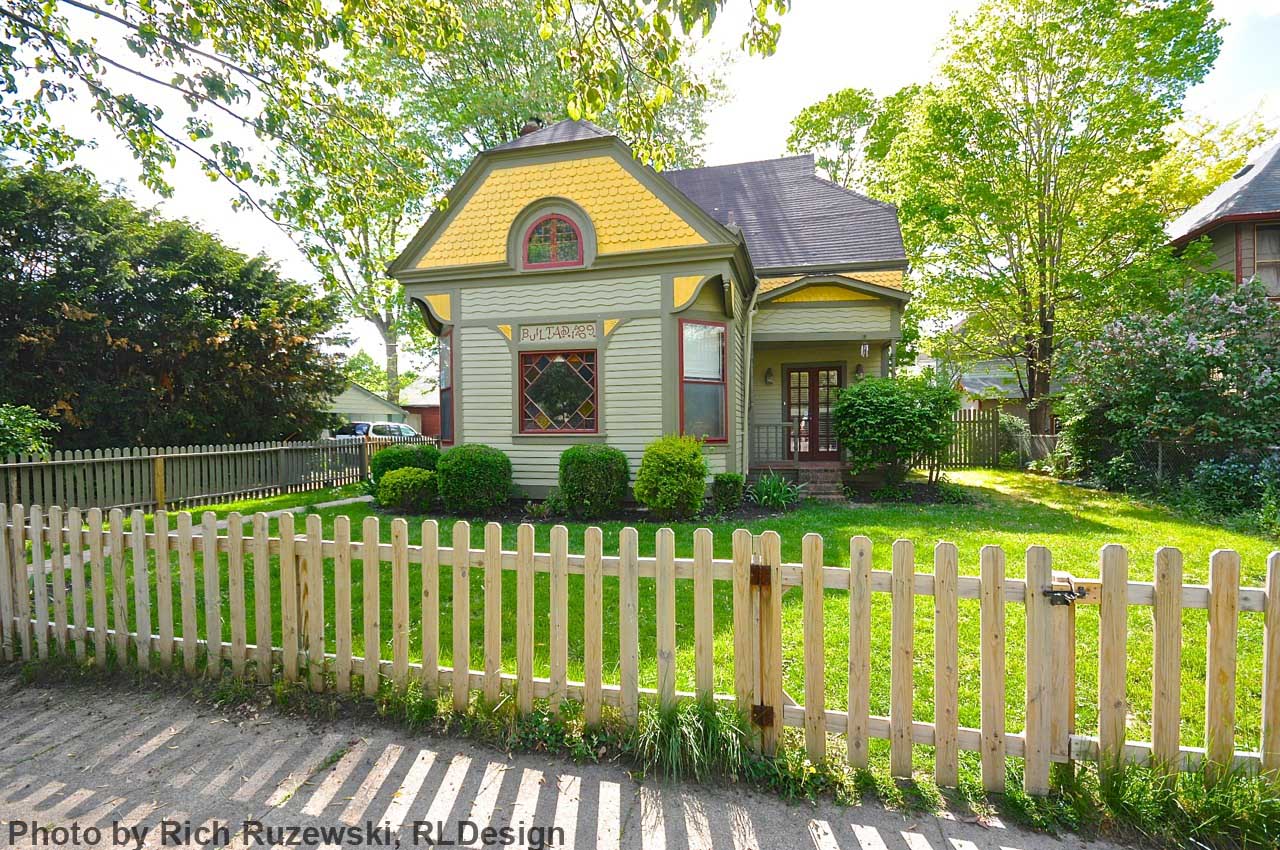 Many times determining the construction date of an old house is nearly impossible, but the Queen Anne cottage at 1014 N. Arsenal Avenue is a researcher’s dream. It features a prominent sign above the front window reading: “BUILT AD 1889.” 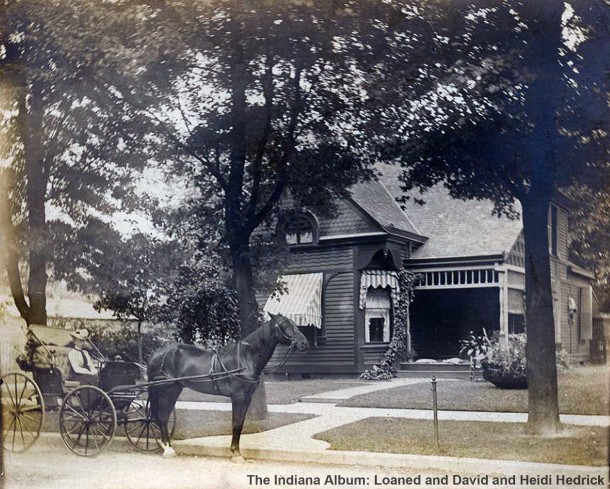 Circa 1900 snapshot of the cottage at 1014 N. Arsenal Avenue. Note that the sign with the 1889 construction date is hidden behind the window awning. (The Indiana Album: Loaned by David and Heidi Hedrick)

The city’s population swelled from 50,000 residents in the 1870s to over 105,000 in 1890 and streetcars made suburban developments such as Milligan Park Front Addition north of the U. S. Arsenal a popular option for builders. This eastside house was constructed a half block north of East 10th Street (then Clifford Avenue) in 1889 for Catherine Thomas, widow of brick manufacturer Robert Thomas. Thomas, a native of England, had been a partner with Stephen Keyes Fletcher in the Fletcher and Thomas Philadelphia Brick Yards near Brightwood. Fletcher was the son of early settler Calvin Fletcher, who had previously farmed hundreds of acres from Massachusetts Avenue to Sherman Drive. At the time of its construction, the address for the home was 10 Woodruff Avenue (Woodruff Place is two blocks southeast of this street), but by 1898 the city’s major street renaming and numbering project changed the address to 1014 N. Arsenal Avenue.

Within a few years the home was purchased by Benjamin F. “Frank” Mesker and his wife Jennie, who lived in the house for about forty years. Frank’s brother Edward and his family lived next door in a house with similar details. To the south was a recently constructed plaster house, today known as the Prosser House. For nearly five decades, Frank walked or rode the trolley four blocks west on 10th Street where he worked as station agent  for the Massachusetts Avenue Passenger Depot, affectionately known as the Little Depot. Mesker appears to have been the heart of the station, completing tasks from ticket sales, telegraph operations, and tending fires in the two massive stoves. In his later years he loved regaling his friends with stories of the past and changes that he’d seen, and he certainly witnessed several important moments in Indianapolis’s transportation history. His obituary states that he was a passenger on the first streetcar and rode on the first train to circle the city on the Belt Railway in 1877. While spending the winter with their granddaughter in Cuba, Frank died in January 1927. 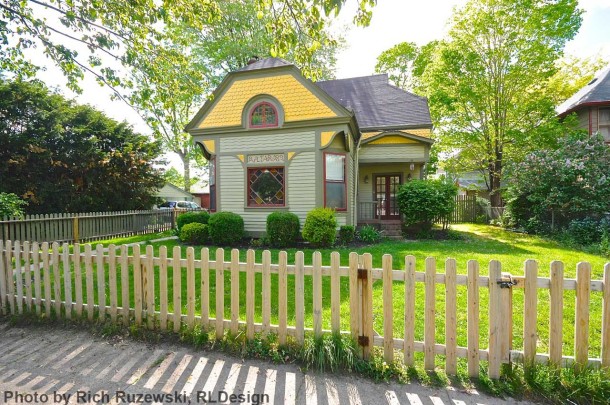 2014 (Photograph by Rich Ruzewski of RLDesign; courtesy of Jay Small)

The house saw many occupants through the years and was converted into a double after Jennie Mesker moved out in the early 1930s: John and Gladys Fesler rented the home in the 1930s; Glenn and Lora Jackson in the 1940s and ’50s, and Noland England and others in the 1960s and ’70s. By the time the house was restored by Merrick and De Anne White in the early 1980s, it was in sad condition with a sagging foundation, crumbling plaster, and no functional plumbing or heating. But the original charm and architectural details remained including fish-scale shingles, a colored-glass window, beautiful interior oak woodwork, and the original 1889 sign, flanked by sunflower-motif ornamentation. Merrick’s father labored over the sign, a little worse-for-wear and hidden behind a board, applying wood putty until it was fit to paint. One day an older man who grew up in the neighborhood appeared at their door and told De Anne that he liked the restoration and presented a circa 1900 photograph album full of snapshots, including the “then” photograph seen above.

The album was passed along to the next owners, Dennis and Kayla West, who purchased the house in 1987. As director of Eastside Community Investments, Dennis chose to buy in a near eastside neighborhood that was the focus of his non-profit organization. By then the home was largely restored, but the Wests added a deck, built the garage, and remodeled the kitchen. An unexpected project included installing new living room ceiling joists when they learned that the bedroom above was not adequately supported. Their work was rewarded when the home was featured in the book Painted Ladies of the Midwest. 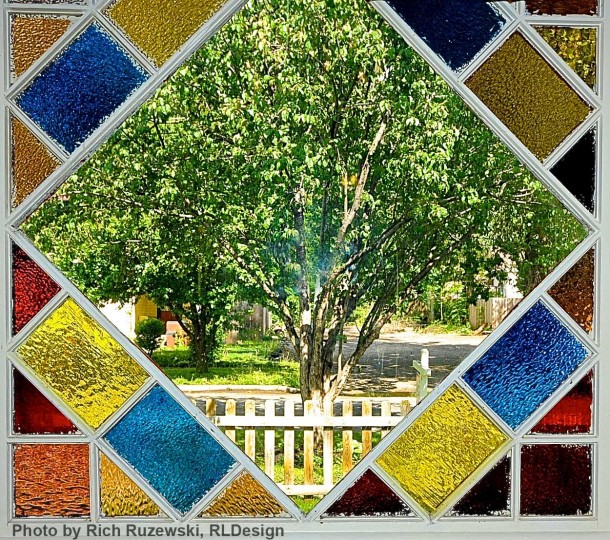 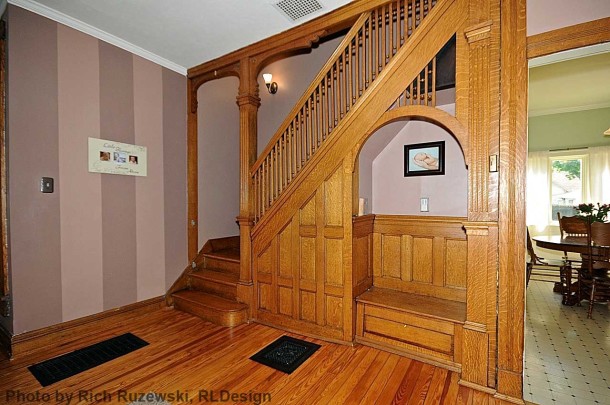 The interior features a quarter-sawn oak paneled staircase with a recessed bench. 2014 (Photograph by Rich Ruzewski of RLDesign; courtesy of Jay Small) 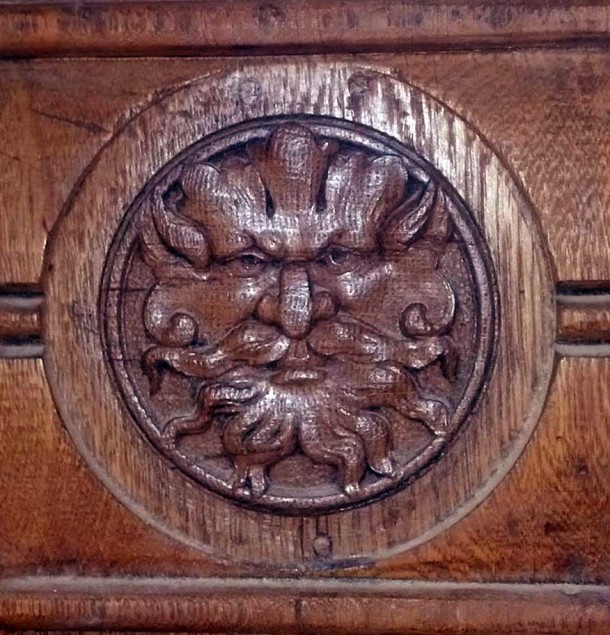 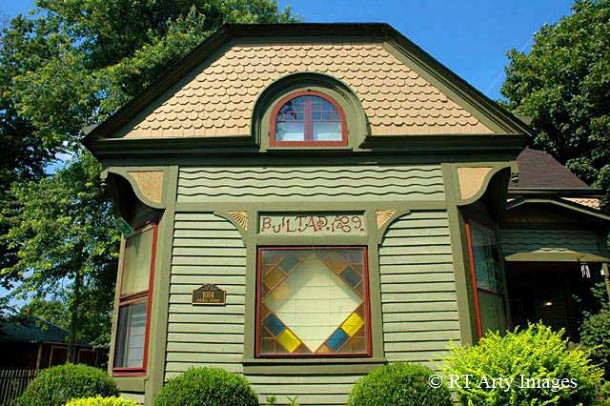 David and Heidi Hedrick have owned the house since 2008, immersing themselves into the Windsor Park neighborhood. David has served as president of the neighborhood association, acquiring and revitalizing Fletcher Triangle Park, but a new job takes them out-of-state and the house is currently on the market. Included in the price is the old photograph album which will remain with the house.

Editor’s Note: As of 5/15/2014 this house is available for purchase. If you are interested in viewing or buying the home, please mention you saw it on Historic Indianapolis. Click here for listing information about the house.