Woodruffian is a  tongue-in-cheek moniker used to denote one as a resident of Woodruff Place neighborhood. A ruffian (defined as “a strong and violent person, especially a man, who threatens and hurts other people”) contrasts with our idea of the genteel Victorians who first settled in the east side suburb. With this is mind, I have nicknamed this mystery glass negative The Original Woodruffians. With a little sleuthing, I think we’re on the path to discovering their identities.

Kimball and Tessie Lloyd-Jones acquired three boxes of mostly Woodruff Place glass negatives in the 1970s, but unfortunately many are unidentifed. This image reveals few clues, other than the large bay window, body language, and clothing. Judging by the fashion, particularly the women’s hats and coats, this picture dates to the late 1890s. The high-quality clothing supports that fact that the sitters are affluent. The unknown photographer was a somewhat serious amateur, but was much better at capturing buildings than humans and the people in back don’t seem to know which direction to look. One can never know for sure, but I’m guessing that the aristocratic-looking gentleman in the chair and the older woman behind him are the parents of at least a couple of the adults. Based on the comfortable way in which the younger woman sits on the arm of the chair, she is probably his daughter rather than a daughter-in-law. Perhaps the man and woman on the right are a couple and who knows what’s up with the guy standing against the window…he certainly doesn’t seem connected to the group. 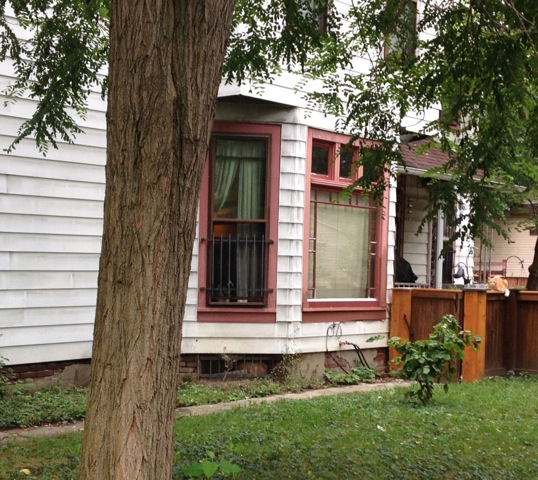 Hoping that a someone might recognize the window, I placed a scan of the photo on Facebook. Today I received an email from Deedee Davis, a librarian at the Herron School of Art, with a current picture of the bay window at 783 Middle Drive. Deedee has a uncanny, detective-like talent for solving architectural mysteries by scouring old Sanborn Fire Insurance maps and driving around seeking out possible matches. Although the aluminum siding covers up details, including the fishscale stringcourse, the original paned larger window topped by three square openings convinces me that this is the same house. 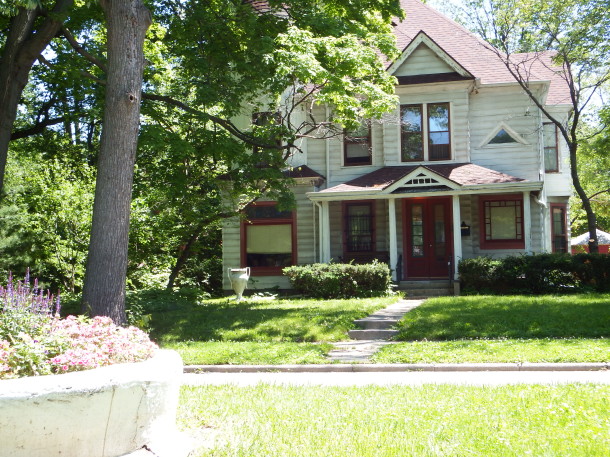 Assuming that the people pictured lived in this house, these are likely members of the Joseph F. and Mary Payne family. The Paynes constructed the large Queen Anne house with an enormous tower in about 1890-91. Formerly from Illinois, Joseph was an agent for the Barnard and Leas Company, manufacturers of grain milling equipment. In the 1900 census the couple’s widowed son LeGrand shared the home with them, along with a servant. Their only other child, a daughter, remained in Illinois. The father Joseph died by 1910, the large house was sold, and LeGrand and his second wife Rena bought a house on Tecumseh Street, just east of Woodruff Place. This was about the time that developers wanted to capitalize on their property’s proximity to Woodruff Place by naming the neighborhood East Woodruff Place, but Woodruff Place residents strongly fought the name and the spat got a little ugly, according to the newspapers, involving court hearings and a restraining order. And for good measure, Woodruff Place refused to share the alley and even installed a concrete, iron, and wire fence between the two neighborhoods (called a spite fence by the newly named Tecumseh Place residents). Maybe the name Woodruffian was fitting for that era after all. 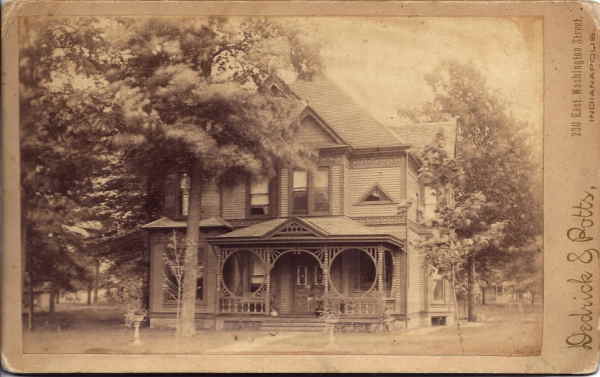 Through ancestry.com we were able to contact a distant relative of Le Grand Payne’s first wife, Minnie Malone. Thanks to Hank Armstong from Oregon for sharing this scan of an early 1890s cabinet card of the Joseph Payne house at 783 Middle Drive. By comparison to other photographs, we now know that the man in the glass negative wearing the light-colored coat is Le Grand Payne and the older seated gentleman is Joseph F. Payne. This photograph was probably made shortly after the house was constructed in 1890-91. We really appreciate it when others share photographs and stories!