The Ruskaup Grocery and Tavern, ca. 1890s. The man standing on the steps on the right is likely proprietor Frederick Ruskaup. Today the Cottage Home Park and Playground occupies the lot to the north, then occupied by two frame cottages owned by Ruskaup. (The Indiana Album: Loaned by Helen Ruskaup)

Were it not for strict rules forbidding commercial buildings in Woodruff Place in the 1870s, this grocery store might not have landed on Dorman Street.  According to family legend, recent German immigrant Frederick Ruskaup wanted to build his grocery store in the newly developed exclusive Woodruff Place, but when his request was denied he purchased land and built his brick store two blocks west of the United States Arsenal (today Arsenal Technical High School). His entrepreneurial spirit eventually made him a wealthy man and his family ran the business for over 75 years.

What is now Cottage Home neighborhood had been platted less than a decade when Ruskaup (pronounced ruhs-kop) purchased a lot at 715 Dorman Street. In 1875 he constructed a two-story brick grocery store with second-floor living quarters for his family. Business was good and he doubled the size of the building in 1885, adding an L-shaped addition to the north and east, and started a tavern that would operate until Prohibition. His family lived upstairs until about 1892 when they moved into their new brick house next door designed by architects Vonnegut and Bohn. At that time the family’s living space above the store was converted into four apartments. The store featured a meat market, bakery, and a delivery service (note the horse-drawn delivery wagon in the 1890s photo above). Older residents recalled that the tavern had a sample room in the back for women (since proper ladies were not seen in bars) and a side door where customers, including children and women, could “rush the growler,” meaning they had their tin buckets and cans filled with beer to go. Helen Ruskaup, Frederick’s daughter-in-law, loaned this photograph in the 1980s. With a twinkle in her eye, she shared that Frederick was “the J. R. Ewing of the Victorian era” (referring to the ruthless character on the then-popular television series Dallas). The grocer allowed customers excessive credit and when they could not pay up he made them sign over their houses. By the time of his death in 1901 Ruskaup had built and acquired over a dozen rental houses, including five Vonnegut and Bohn designed doubles across the street, and was one of Marion County’s top property tax payers. 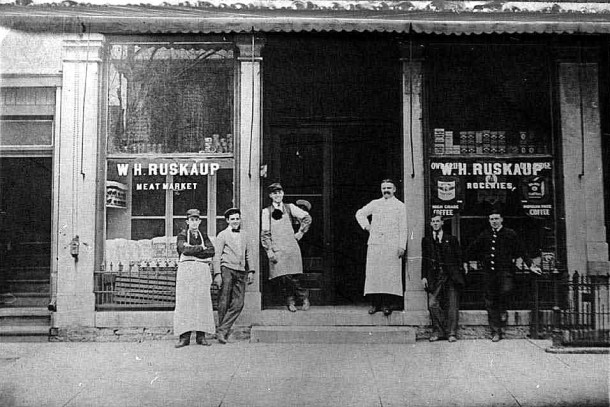 From 1875 though the late 1950s three generations of Ruskaups operated the grocery. Son William H. (the older man in the doorway), assisted by his mother Mary, took over the operation in 1901 upon Frederick’s death. William’s sons grew up in the business. This circa 1910 photo postcard was shared by Myrtle (Ackerman) Patterson whose family lived upstairs when her father worked at the store in 1907 until about 1910. 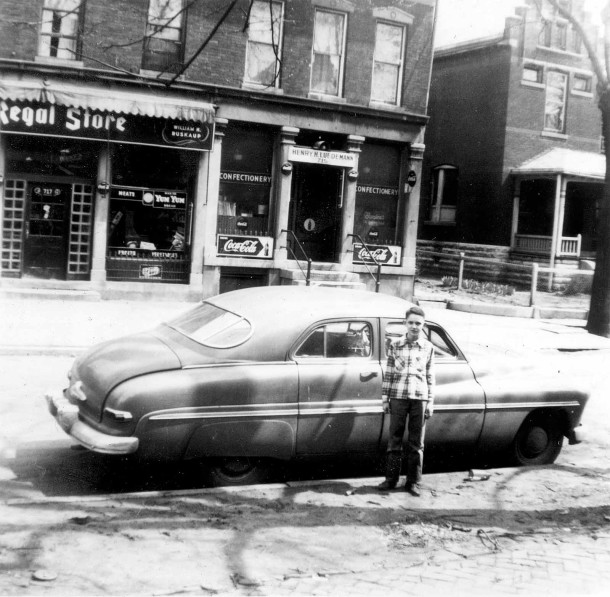 The Ruskaup Grocery and Luedemann’s Confectionery. Snapshot loaned by Ron Hayward, shown here in front of a car in 1952 or 1953. The Haywards rented one of the five Ruskaup-owned doubles across the street, currently the home of David and Becky Hostetter. (The Indiana Album: Loaned by Ron Hayward)

Henry H. Luedemann, a relative of Mary Ruskaup, operated the neighborhood tavern and pool hall in the south half of the building until Prohibition, then he offered candy, ice cream, and soda. Recent visitors to the store remembered pool tables in the back, a candy counter on the left, and a fish tank in a front window. Luedemann managed the bar and confectionery for over 55 years, working well into his 80s and rarely missing a day of work. 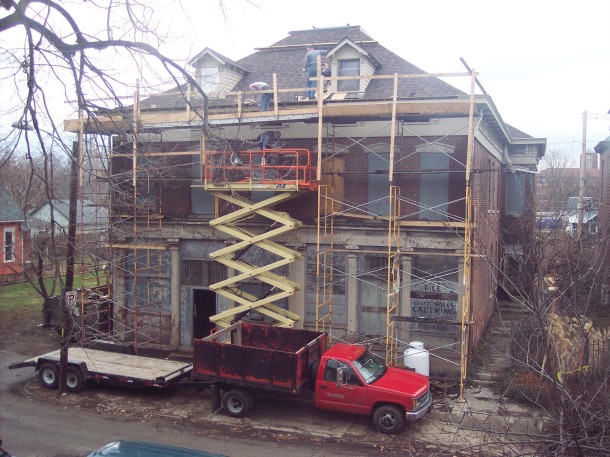 After the Ruskaups closed the business in the late 1950s, the building was used as a pool hall and storage for Hogue Construction and Cliff Mills Caulking. Windows were boarded up and the decorative brackets removed. After sitting vacant for over two decades, owners John Dugger and Becky Garland began restoration of the building in 2007 with a new roof, replacement brackets, and interior stabilization. A façade grant from LISC (Local Initiatives Support Corporation) partially funded the restoration and replacement of windows and doors. 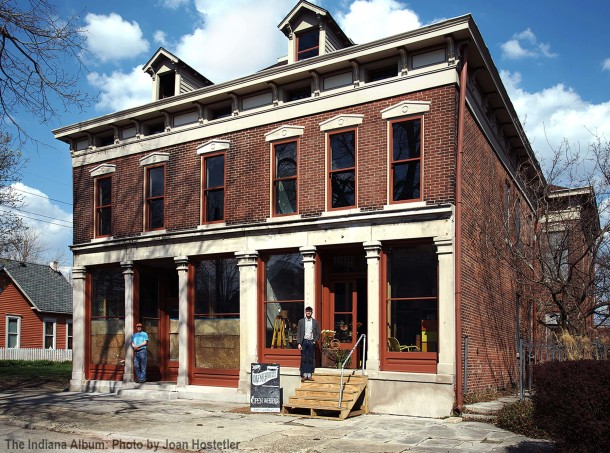 Although the interior is not yet restored, the downstairs commercial space is once again occupied, giving neighbors a glimpse of how the building must have once been a hub and gathering place for local residents. Gordo’s Fine Woodworking helped with the exterior restoration and never left, renting the northern half. In November 2013, Kris Bowman approached the owners about opening a pop-up shop in the empty southern half. Despite the lack of a furnace during the winter months, the Inventorialist thrived in the chilly store (Kris is a hardy Minnesota native, after all). The shop, specializing in vintage, industrial, and designer-made goods, is now permanently open Thursday through Sunday and Kris loves hearing stories about the building’s past.

A History Rich First Friday, May 2, 11 am through 8 pm
The Indiana Album and the The Inventorialist are teaming up for a First Friday event during Preservation Week. Bring your historic or documentary Indiana photos. Volunteers will digitize your photos of houses, businesses, buildings, interesting people, or events at the all-day Scan-a-Thon. All selected photos will become part of the Indiana Album project (photo credit goes to you and the photographs will be included in the Indiana State Library’s Indiana Memory catalog). Click on the Indiana Album to learn more about this state bicentennial project. Bring along your family photos for a free dating and preservation consultation provided by Joan Hostetler of Heritage Photo & Research Services , who lives and works in the 1888 Ruskaup double at 716 Dorman Street. The Inventorialist will be filled with new goods and will make a fun place to visit while your photos are added to the history project. Refreshments served at both locations. Questions? Call 317.771.4129 or email info@indianaalbum.com.